and in Print from Dark Horse Books July 2022

January 20, 2022—New York, NY / Portland, OR—Matthew Arnold, the creator and executive producer of NBC’s Emerald City and Siberia, is making his graphic novel debut with Eden, which is illustrated by acclaimed artist and DMZ co-creator Riccardo Burchielli. Eden is a riveting science fiction story that features the lives of escaped convicts, abandoned in a fantastical world. This thought-provoking graphic novel marries Arnold’s high concept storytelling with the mind-blowing artwork of Burchielli (DMZ, Northlanders, Highway To Hell), with colors by Luca Salce, and lettering by Ed Dukeshire. The project is edited by noted editor Will Dennis. Told in 5 heart-pounding chapters, Eden debuts on March 29, 2022 from comiXology Originals, the digital exclusive content line of comiXology, an Amazon company.

Eden is a story about starting over. When a new law declares that convicted criminals should be cryogenically frozen instead of jailed, society thinks it has found a more humane way to deal with inmates. But when a senator, accused of a horrible crime, is imprisoned under this new system, she will have to face a bizarre and frightening reality, unlike anything she can imagine.

“At the heart of this story is an exploration of forgiveness and redemption,” says Arnold. “In our social media / insta-news world, we can often make snap judgements in the court of public opinion about a person, often times on the worst day of their lives. The question the novel asks is whether true forgiveness can ever be achieved. And do we judge people on their pasts or their presents?”

In the graphic novel, two convicts, senator Anna Croft, and her sheriff husband, Ben, are sentenced to twenty-five years to life in a newly constructed cryogenic penal facility for a crime they claim they didn’t commit. Due to a malfunction, however, Anna, Ben and a few others are accidentally released. Once free, the escapees discover that they’ve been frozen for thousands of years, and are the only survivors in a catastrophic future, where prehistoric creatures walk the Earth once more. Given a second chance, the fugitives are forced to create a new society and must decide whether or not to release the rest of the imprisoned criminals in order to survive. Under Anna’s leadership, can these ‘bad seeds’ actually seed a new and better world, or are they doomed to repeat the mistakes of humanity’s checkered history?

ComiXology Originals titles are available at no additional cost for members of Amazon Prime, Kindle Unlimited, and comiXology Unlimited, and for purchase on the Amazon Kindle Store and comiXology. Prime Reading offers all Amazon Prime members a rotating selection of over a thousand top Kindle books, magazines, short works, comic books, children’s books, and more – all at no additional cost. Kindle Unlimited gives customers access to more than 1 million titles, including thousands of audio books, and current magazines for just $9.99 a month with a free trial period at amazon.com/kindleunlimited. ComiXology Unlimited offers over 40,000 comics, graphic novels and manga for just $5.99 a month with a 30-day free trial at http://amazon.com/comixologyunlimited.

Dark Horse, the legendary comic book publisher of titles including Black Hammer, Hellboy, Sin City and The Umbrella Academy, will publish Eden in print for the first time on July 12, 2022.

Matthew Arnold is best known as the creative mind behind the NBC fantasy drama Emerald City, which he created and executive produced as a dark reimagining of The Wizard of Oz. He is also known for creating and showrunning the NBC mystery/adventure series Siberia, on which he was also an executive producer and director. His feature debut was as the director and writer of Shadow People, a true-life horror story. Arnold is currently the creator, executive producer, and showrunner of  Revenge Inc., an original series in development at Netflix with Dark Horse Entertainment.

Burchielli began his career in 1997, with a story of Desdy Metus and later he worked for Ediperiodici. From 2003, he illustrated three stories for John Doe. In 2005 he co-created DMZ which was recently turned into an HBO TV series. In 2007 he received the prestigious Gran Guinigi Award for Best Artist at Lucca Comics & Games.

In 2010, he was among the founding members of Italian Job Studio, a creative collective active in the television and cross-media production field. In the same year his works were exhibited at the Cité dell’Architecture in Paris as part of the Exhibition Archi & BD, alongside those of masters such as Moebius, Bilal, Lorenzo Mattotti, Winsor McCay and Frank Miller. In 2014 he worked on Highway To Hell, a horror miniseries winner of two Ghastly Awards and nominated for the prestigious Bram Stoker Awards, written by Victor Gischler and Boosta. While collaborating with Sergio Bonelli Editore on Dylan Dog, in recent years he put his skills as a storyteller at the service of brands such as Ferrari and BMW Motorrad and as a character designer for cinema and video games.

ComiXology, an Amazon.com, Inc. subsidiary (NASDAQ:AMZN), is a revolutionary, cloud-based digital comics service. With content from over 125 publishers as well as thousands of independent creators from around the world, comiXology provides an unrivaled library of comic books, graphic novels, manga and bandes dessinées. The company’s first-in-class innovations include Guided View technology, which provides an immersive and cinematic reading experience, and a new monthly subscription service. ComiXology is based in New York City, with operations in Seattle and Los Angeles. Follow the company on Twitter, Facebook and Instagram.

“Cryogenically frozen prisoners wake to find themselves in a strange and deadly future? Eden’s premise is so fun and brilliant I wish I’d thought of it myself! But Eden is more than just a fantastic high concept, Arnold and Burchielli have created a gripping sci fi epic, an adventure story, a knife-sharp mystery, and a poignant drama about forgiveness and redemption, all in one masterful tale. One of the most impressive debuts of the year! “ –Scott Snyder (Batman, We Have Demons)

“A thought provoking tale of morality and human nature, EDEN twists and turns your expectations until the very end.” –Jock (Batman, Snow Angels)

“Arnold and Burchielli have created a riveting world that questions truth, morality, and even reality through enticing characters and gorgeous artwork. The many twists and turns of Eden will make you unable to put down the story.”

–Stephanie Phillips (Harley Quinn, We Only Kill Each Other) 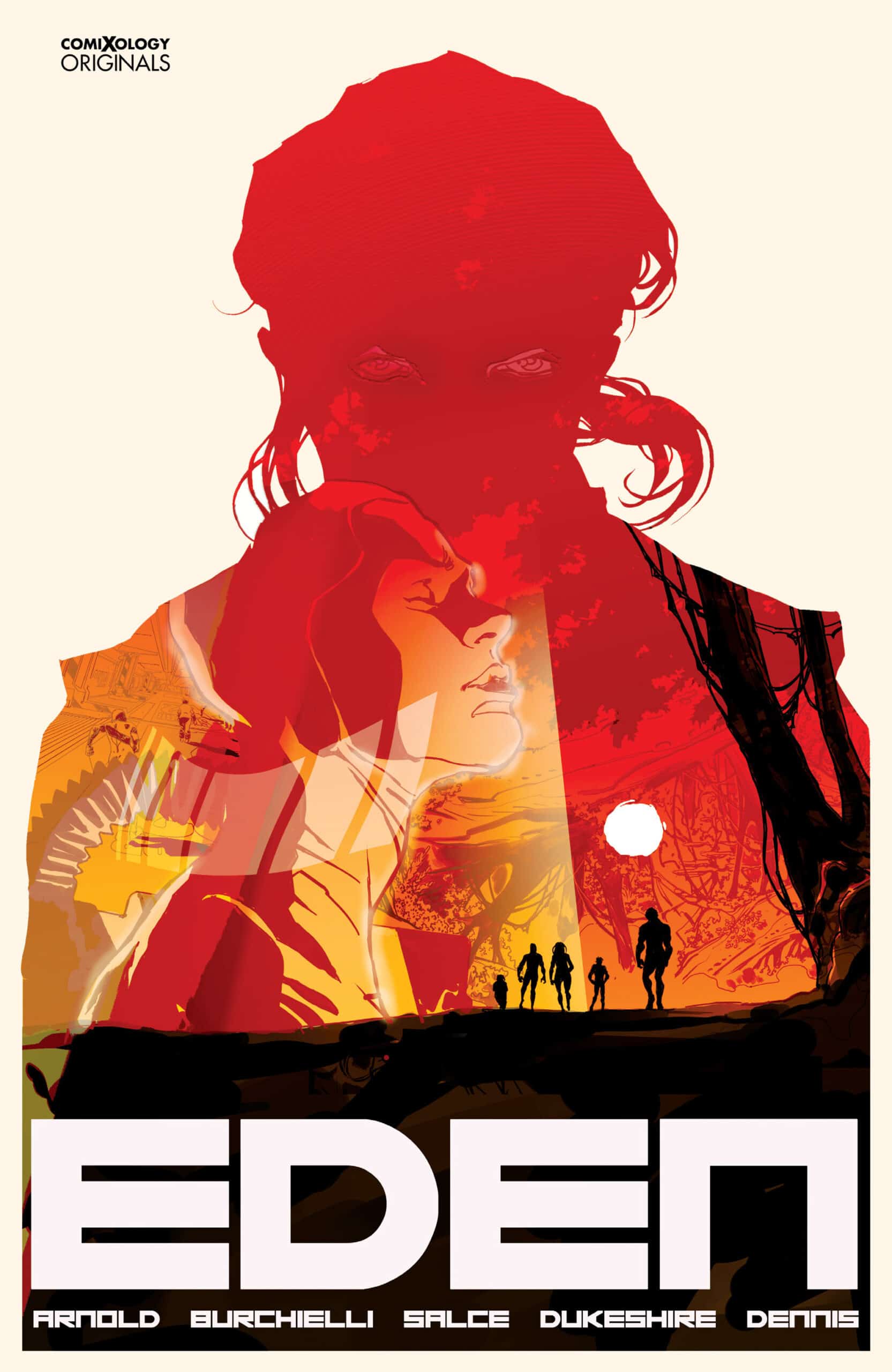 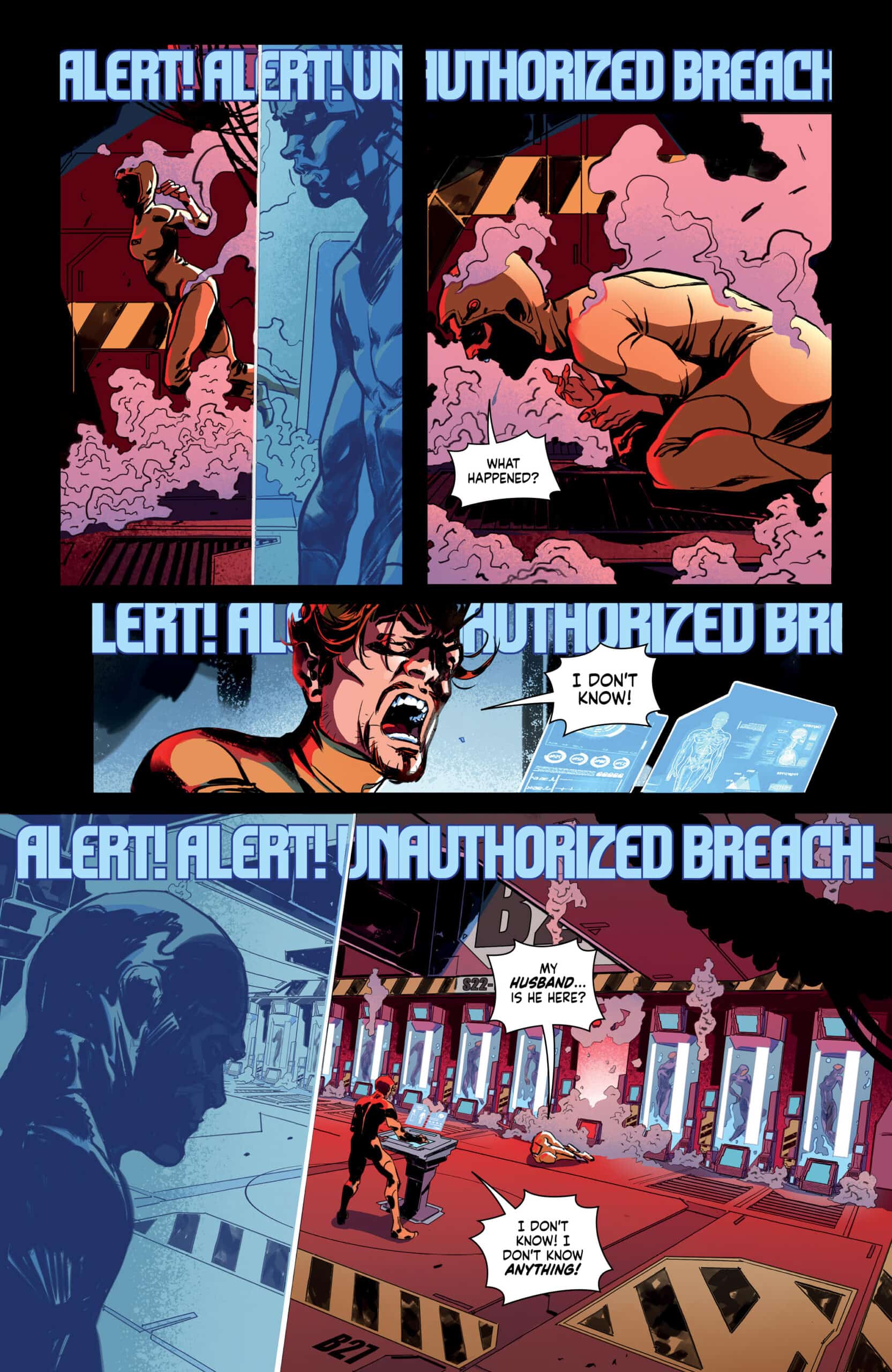 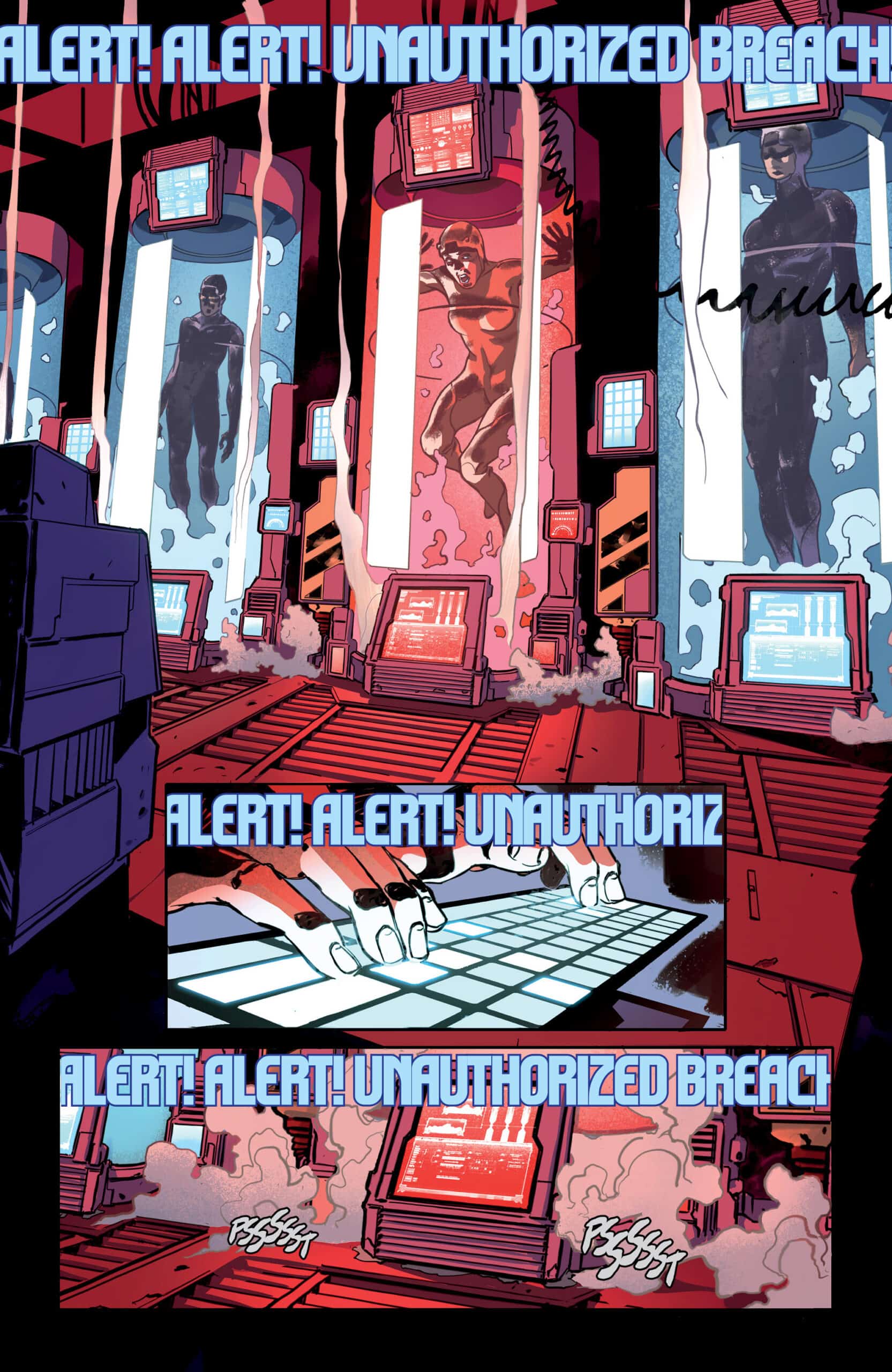 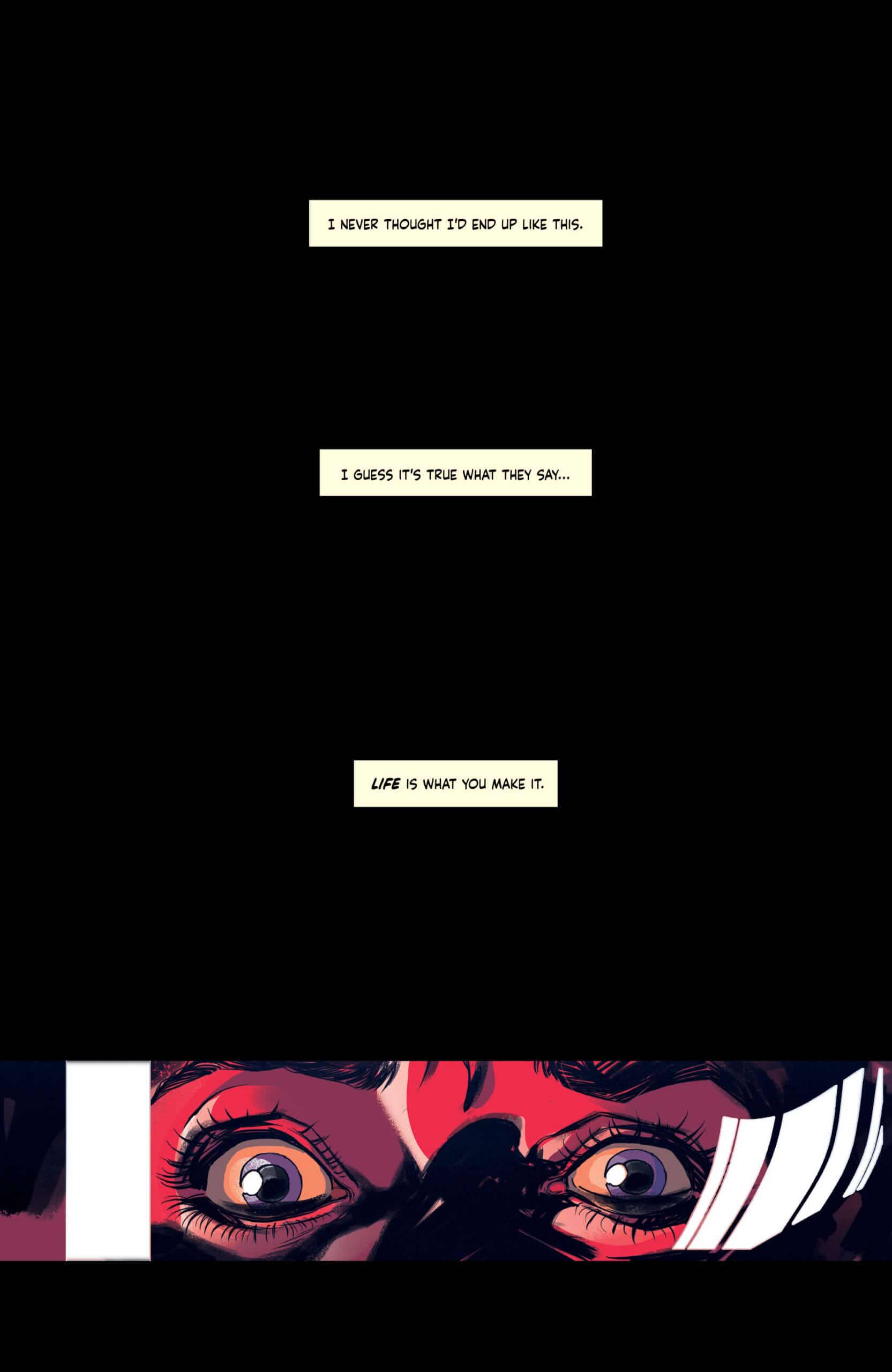