It’s that time of year again. San Diego Comic-Con is in full swing, and with that comes exciting news about comics and the like. Just announced earlier today is the forthcoming Elquest series from Dark Horse Comics. You can read the full press release below as well as cover art for the first issues. As always, keep your browsers pointed to  comic-watch.com for all your comics news and reviews, and all the latest from San Diego Comic-Con! 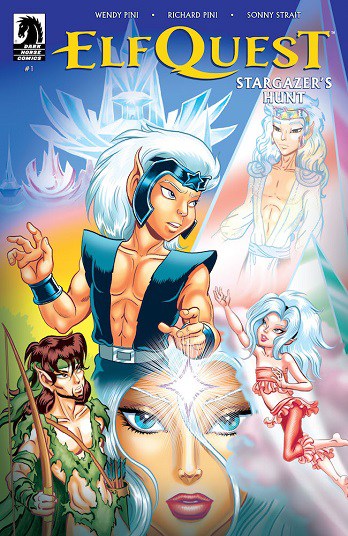 The world of ElfQuest continues to grow at Dark Horse Comics with an all-new series! ElfQuest: Stargazer’s Hunt has story by ElfQuest co-creators Wendy and Richard Pini, and a script by Wendy Pini. Veteran ElfQuest alumnus Sonny Strait returns at full force as the artist (over layouts by Wendy) and colorist for the new series.

“I feel both thrilled and anxious as I hurtle into new writing territory with Stargazer’s Hunt. Always the ‘champion’s companion,’ Skywise is now a hero unto himself, questing for a prize no one could possibly guess,” said ElfQuest co-creator Wendy Pini. “While Cutter’s story arc on the World of Two Moons was meticulously planned, Skywise’s hunt encompasses all of space and time, and surprises await. Who can know what will befall him?”

When ElfQuest: The Final Quest concluded, it ended the hero’s journey of Cutter Kinseeker, chief of the Wolfriders. But that was only the start of a new adventure for Cutter’s “brother in all but blood,” Skywise. Now the stargazer elf, who thought he knew everything about Cutter, discovers how mistaken he was. That, combined with a tragic accident involving his daughter Jink, sends Skywise on a quest of his own, from the elves’ ancestral Star Home through uncharted space, and back to the World of Two Moons.

“One of the most beautifully crafted, well thought out comic book fantasy epics of all time.”–Comic Book Resources

“It is no wonder that ElfQuest has had such an enduring legacy. The care and crafting of the stories, the development of the characters, the wide range of meticulously depicted settings, draw us in even years after we’d last cracked open an issue.” –Outright Geekery

“The adventures of Cutter, Skywise and the Wolfriders (and their amazing hairdos) are absurdly addictive.”–NPR