Still bummed that DC eighty-sixed their Vertigo imprint? Well, fear not, because this October, DC Comics and award-winning author Joe Hill are teaming up to bring us Hill House Comics. You may remember Hill from his uber-awesome title Lock & Key, however his resume holds awards and accolades stretching the literary and comic world. He is also the son of famed horror author Stephen King! You can read the official release from DC below, as well as check out art from the upcoming first issues. As always keep your browser pointed to comic-watch.com for all your comic news and reviews…

This October, DC will team up with best-selling author Joe Hill (NOS4A2, Locke & Key) to present Hill House Comics, a new pop-up line of horror comic books. DC’s long-standing tradition of publishing thought-provoking and riveting horror from HOUSE OF MYSTERY to classic SANDMAN will continue with this new line featuring five original limited series meant to chill the bones and summon nightmares with smart, subversive narratives and haunting, heart-stopping visuals. And it all begins this fall, in time for a very haunting Halloween.

“Anyone who’s paying attention knows we’re in the middle of a new golden age of horror: films like Get Out, Hereditary, It Follows and plain old It have raised the bar higher and higher,” says Hill. “Meanwhile, ongoing shows like AMC’s The Terror and Netflix’s Stranger Things have shattered preconceived notions about what’s possible in episodic terror TV. There’s great stuff happening in comics, of course—in a field of unbounded creativity and wacko visionaries, there’s always great stuff happening—but greedy me wants more.

At Hill House Comics we aim to shock the senses and soak the page in red, with new, hooky horror from seasoned old hands and young masters of the field, all set free to share their most disturbing nightmares…for your pleasure! The books are backed by DC’s second-to-none comic book craftsmanship, and we’re working with the very best editors on parole from Arkham Asylum to craft unputdownable tales of menace and madness. I can’t wait to share some fresh scares with comic book readers everywhere. It’s going to be fun.”

The first of these new monthly comics will debut on October 30 with BASKETFUL OF HEADS, written by Joe Hill with art by Leomacs, followed by four other series in subsequent months, including:

In addition, a backup story titled “Sea Dogs,” written by Hill and featuring lycanthropes terrorizing a crew of sailors at sea, will run in the back of every issue from the line.

“Bringing horror to the forefront of our publishing plan has been a huge initiative for DC and a passion project of mine, but it was always about finding the right time and voice to mastermind it—and there is no one better than Joe Hill,” says DC executive editor Mark Doyle. “Joe is a modern master; his ability to blend visceral, high-concept horror with heartfelt characters is what has grabbed the attention (and throats!) of millions of readers. His vision and taste are unparalleled; you can see it in the incredible talent he’s assembled here, and the stories they’re crafting are bringing the next generation of horror to DC.”

“Joe Hill’s vision for this new line is incredibly exciting,” says DC Editor-in-Chief Bob Harras. “Bringing in new and well-known creative voices with different backgrounds to tell their thrilling and terrifying tales, mixed with the energy around the horror genre at large—it all makes it a great time to be a fan of DC.”

“We’re so happy to welcome Joe Hill to DC, and to partner with him on this new specialty line of creator-owned horror books,” says DC Publisher Dan DiDio. “Horror has been such an integral part of DC’s history and it’s a tradition we want to see revitalized. As a lifetime fan of horror, I know fans are going to be so excited when these books hit shelves. I can’t wait.” 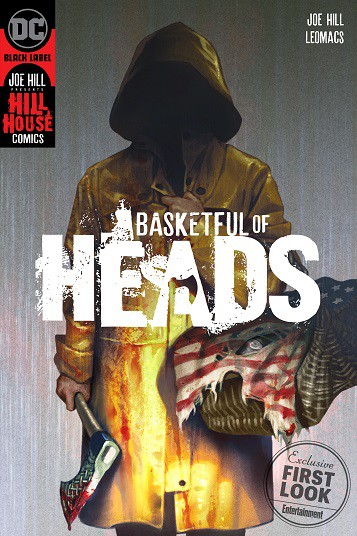 The rain lashes the grassy dunes of Brody Island, and seagulls scream above the bay. A slender figure in a raincoat carries a large wicker basket, which looks like it might be full of melons…covered by a bloodstained scrap of the American flag.

This is the story of June Branch, a young woman trapped with four cunning criminals who have snatched her boyfriend for deranged reasons of their own. Now she must fight for her life with the help of an impossible 8th-century Viking axe that can pass through a man’s neck in a single swipe—and leave the severed head still conscious and capable of supernatural speech.

Each disembodied head has a malevolent story of its own to tell, and it isn’t long before June finds herself in a desperate struggle to hack through their lies and manipulations…racing to save the man she loves before time runs out. 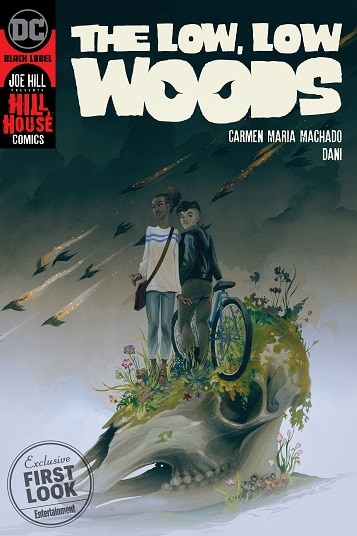 A mysterious plague is afflicting the small mining town of Shudder to Think, Pennsylvania. It strikes seemingly at random, eating away at the memories of those suffering from it. From tales of rabbits with human eyes, to deer women who come to the windows of hungry girls at night, this town is one of those places where strange things are always happening. But no one ever seems to question why…

THE LOW, LOW WOODS is a gruesome coming-of-age body-horror mystery series about two teenage women trying to uncover the truth about the mysterious memory-devouring illness affecting them and the people of the small mining town they call home—and the more they discover, the more disturbing the truth becomes. 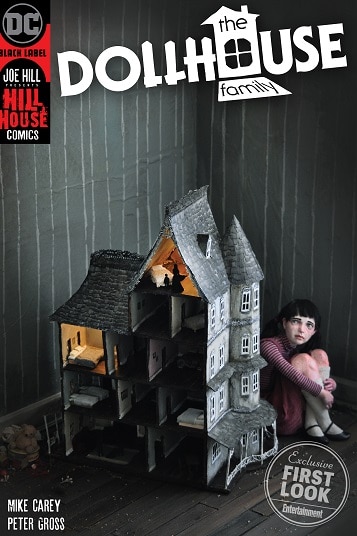 On Alice’s sixth birthday, her dying great-aunt sends her the birthday gift she didn’t know she always wanted: a big, beautiful 19th-century dollhouse, complete with a family of antique dolls. In hardly any time at all, the dollhouse isn’t just Alice’s favorite toy…it’s her whole world. Soon young Alice learns she can enter the house, to visit a new group of friends, straight out of a heartwarming children’s novel: the Dollhouse family. As the years pass, Alice finds herself visiting their world more frequently, slowly losing track of where reality ends and make-believe begins. What starts as play concludes in an eruption of madness and violence.

Childhood ends—but that little house casts a long shadow over Alice’s adult life. When the world becomes too much for her to bear, Alice finds herself returning to the dollhouse and the little folk within. The house can offer her a shelter from all her sorrows…but only if she gives it what it wants, and god help her if she tries to walk away again… 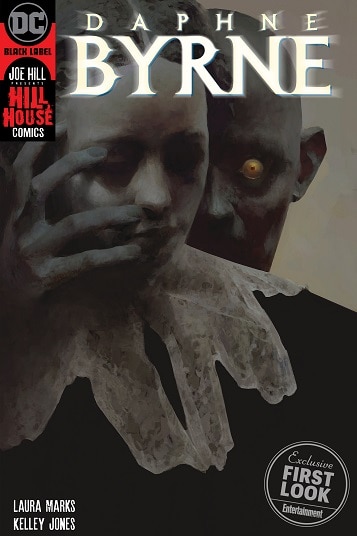 In the gaslit splendor of late 19th-century New York, rage builds inside 14-year-old Daphne. The sudden death of her father has left her alone with her irresponsible, grief-stricken mother—who becomes easy prey for a group of occultists promising to contact her dead husband. While fighting to disentangle her mother from these charlatans, Daphne begins to sense a strange, insidious presence in her own body…an entity with unspeakable appetites. And as she learns to wield this brutal, terrifying power, she wages a revenge-fueled crusade against the secret underworld that destroyed her life. 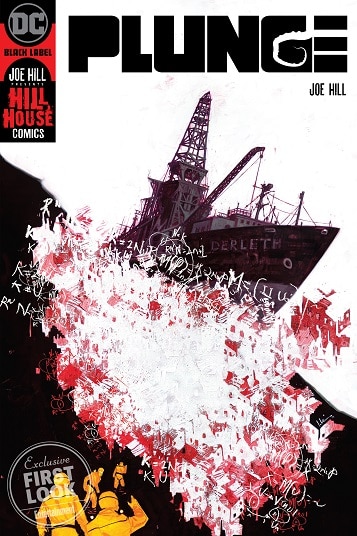 In 1983 the Derleth disappeared, wiped out in a storm on the edge of the Arctic circle—the world’s most advanced research vessel in the hunt for oil, lost in the aftermath of a tsunami. Almost 40 years later, the Derleth begins to transmit its distress signal once again, calling in to Alaska’s remote Attu Station from the most forlorn place on earth, a desolate ring island in the icy faraway. A US salvage team made up of experts, scientists, and mercenaries helicopter in just ahead of a storm—and the Russian competition—to find the abandoned wreck hung up on the island shores of the atoll. As a wintry blizzard clamps down, anomalies begin to surface: first the samples of an oil with unlikely properties, and then the sonar readings of a sunken prehistoric civilization just offshore. Still, nothing could prepare the salvage team for the reappearance of the Derleth’s crew from the island cave, no older than they were four decades ago, every one of them struck blind by an inexplicable infection…and yet capable of seeing in new ways, possessed of extraordinary powers and stripped of all but their last vestiges of humanity…

Written by: Joe Hill
Art by: TBD
The Revolution is screwed.

In 1779 the pathetic American navy is a pile of smoldering wrecks choking the Penobscot River. Imperial Britain has amassed the mightiest fleet the world has ever known, led by the HMS Havoc, a 90-gun second rate that has sunk a forest of French, Spanish and American frigates, sketching a trail of devastation that stretches all the way from St. Kitts to Machias, Maine. The faltering Continental Congress can’t hope to match England’s sea power, and they’re just desperate enough to make a deal with the devil…or even three.