As part of their 80th Anniversary celebration of Wonder Woman, this morning DC unveiled a massive slate of publishing releases headlined by the iconic Super Hero. From the young adult anthology Wonderful Women of the World to commemorative hardcovers and free special editions, there’s no better time to be a Wonder Woman fan!

For the global celebration of Wonder Woman, DC is honoring the iconic character’s 80th anniversary with a vibrant collection of commemorative releases, free editions and new series launches all starring DC’s Champion of Truth and Warrior for Peace. Headlined by the inspiring anthology showcasing 23 trailblazing women around the world, Wonderful Women of the World, DC will also thrill Wonder Woman fans with a 100-page spectacular, a commemorative hardcover and multiple brand-new series, all to be released this fall pegged to the global celebration of Wonder Woman Day on October 21. 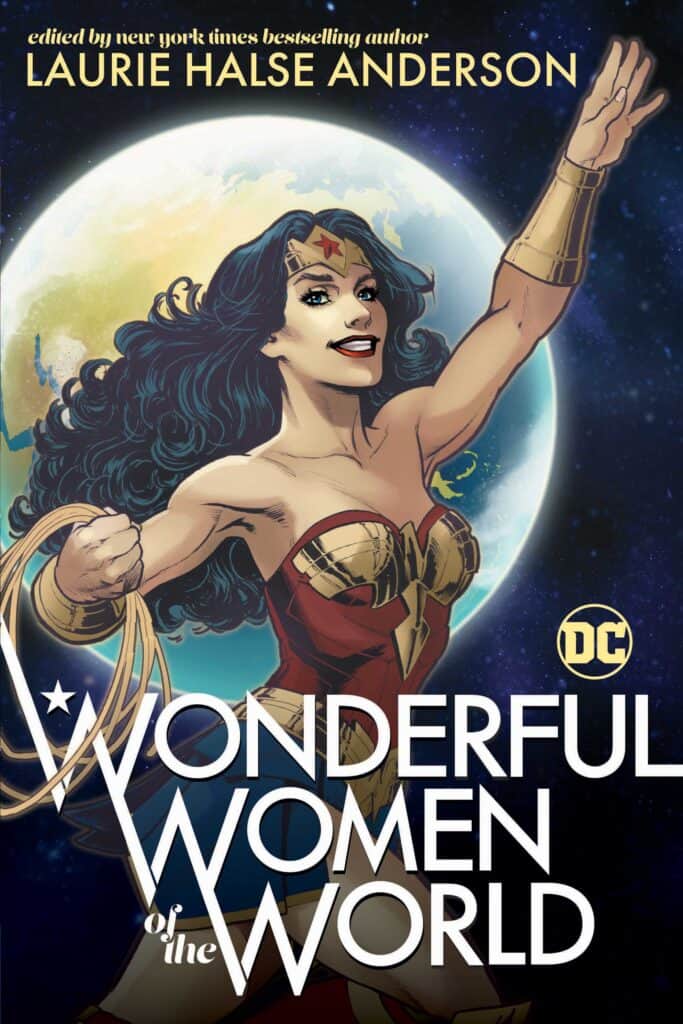 WONDERFUL WOMEN OF THE WORLD – Out September 28, 2021
DC brings together a collection of talented writers and artists to celebrate international role models for teens and kids with a new young adult anthology. Standing for truth, justice and equality, Wonder Woman serves as inspiration for the profiles and portraits of 23 pioneering women from around the globe. Tales of the real-world heroes who take up Princess Diana of Themyscira’s mantle and work in the fields of science, sports, activism, diplomacy, and more include Beyoncé, Serena Williams, Ruth Bader Ginsburg, Greta Thunberg, and Malala Yousafzai, amongst others. Featuring a cover illustrated by acclaimed Wonder Woman artist Nicola Scott and spearheaded by The New York Times bestselling author Laurie Halse Anderson (Speak, Wonder Woman: Tempest Tossed) who serves as editor, the young adult anthology will hit shelves pegged to the milestone 80th anniversary celebration of Wonder Woman. 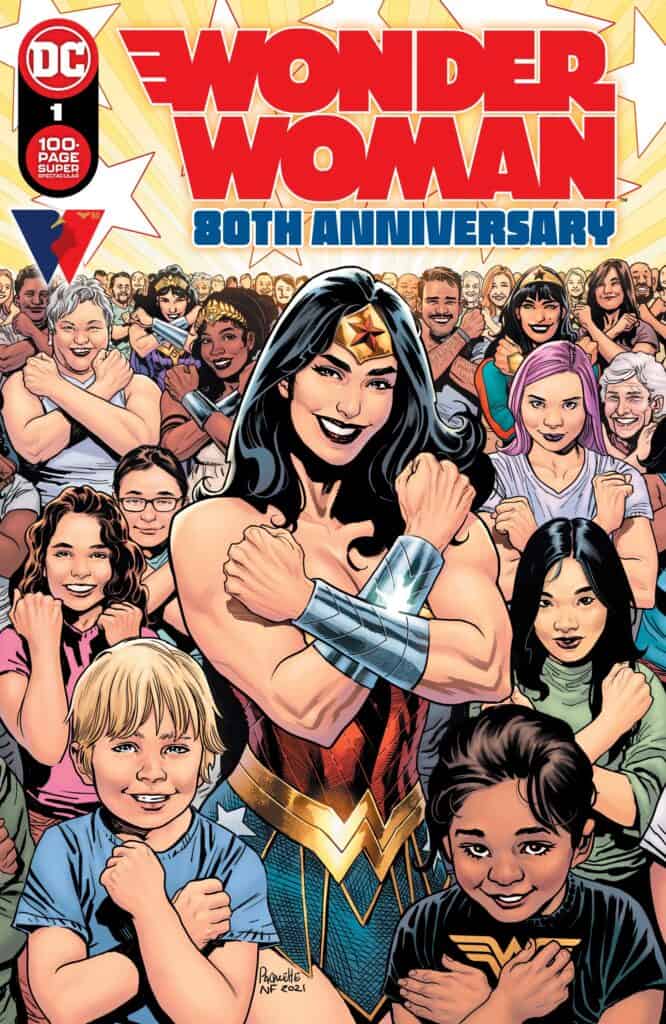 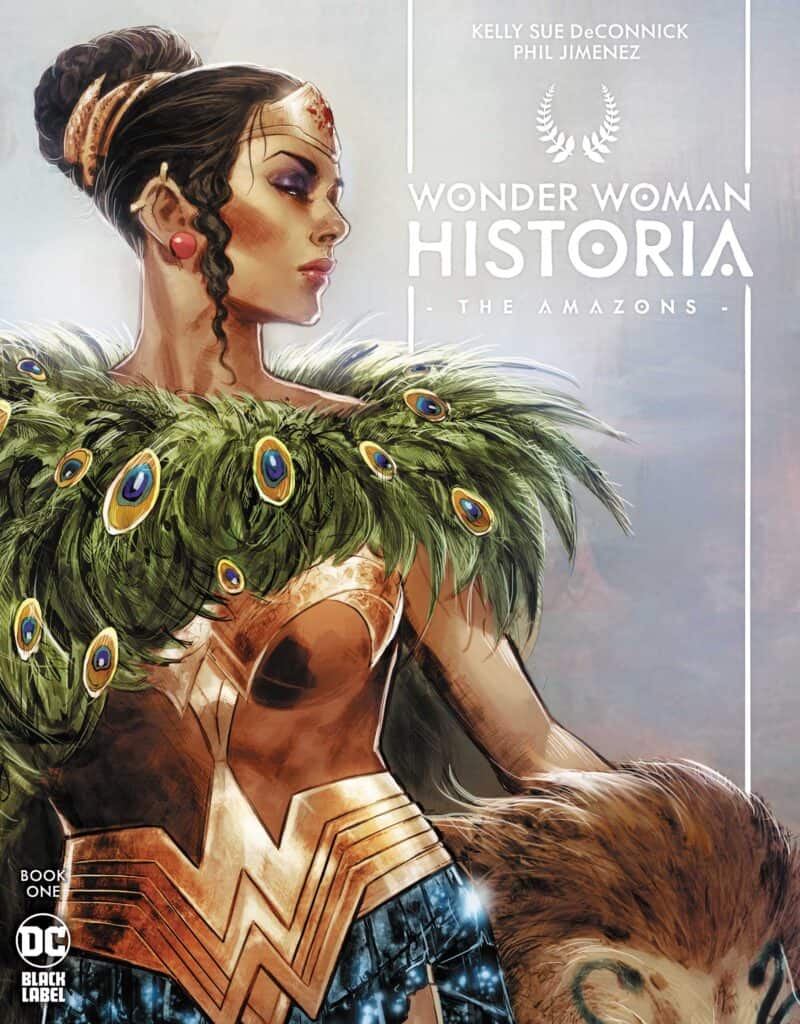 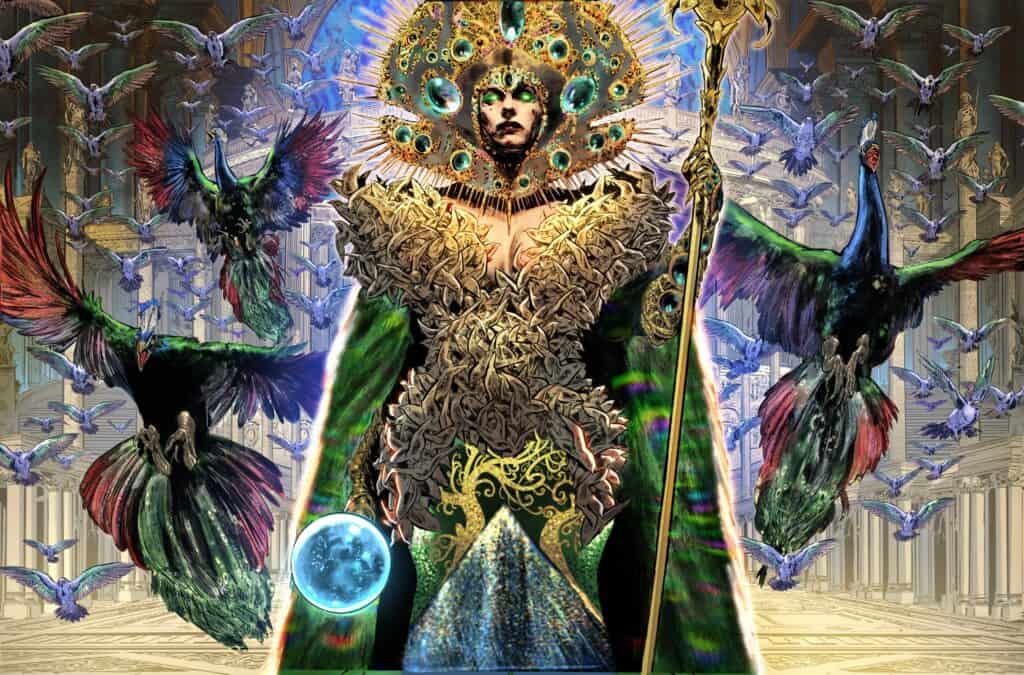 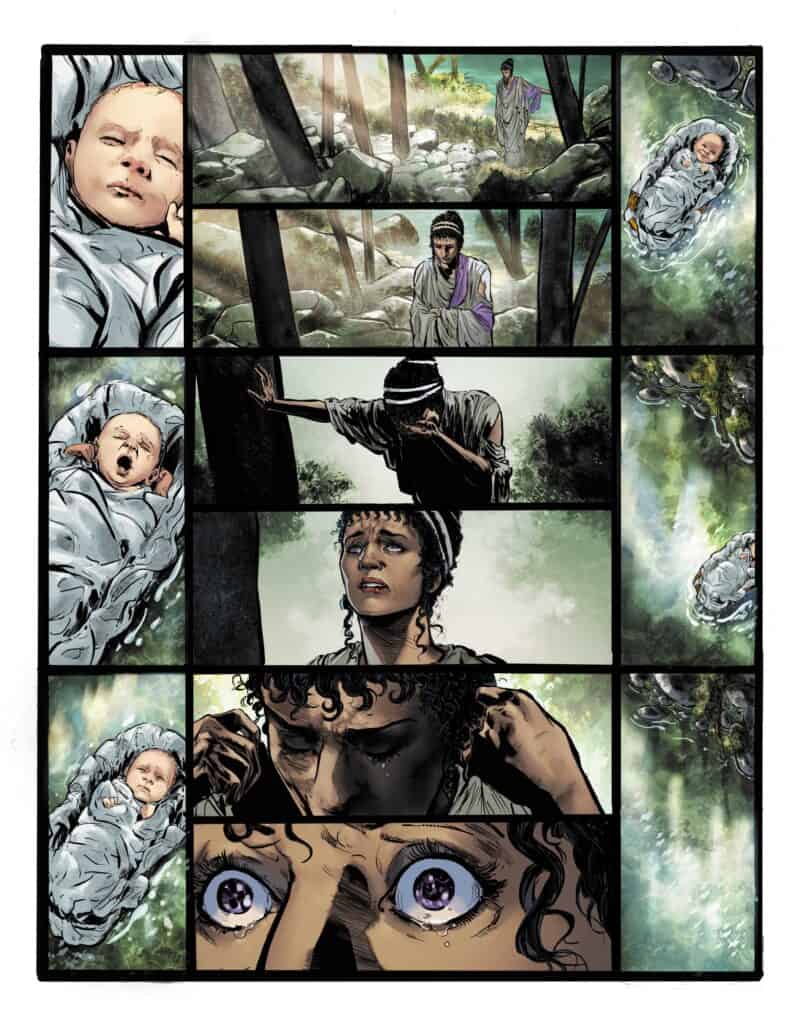 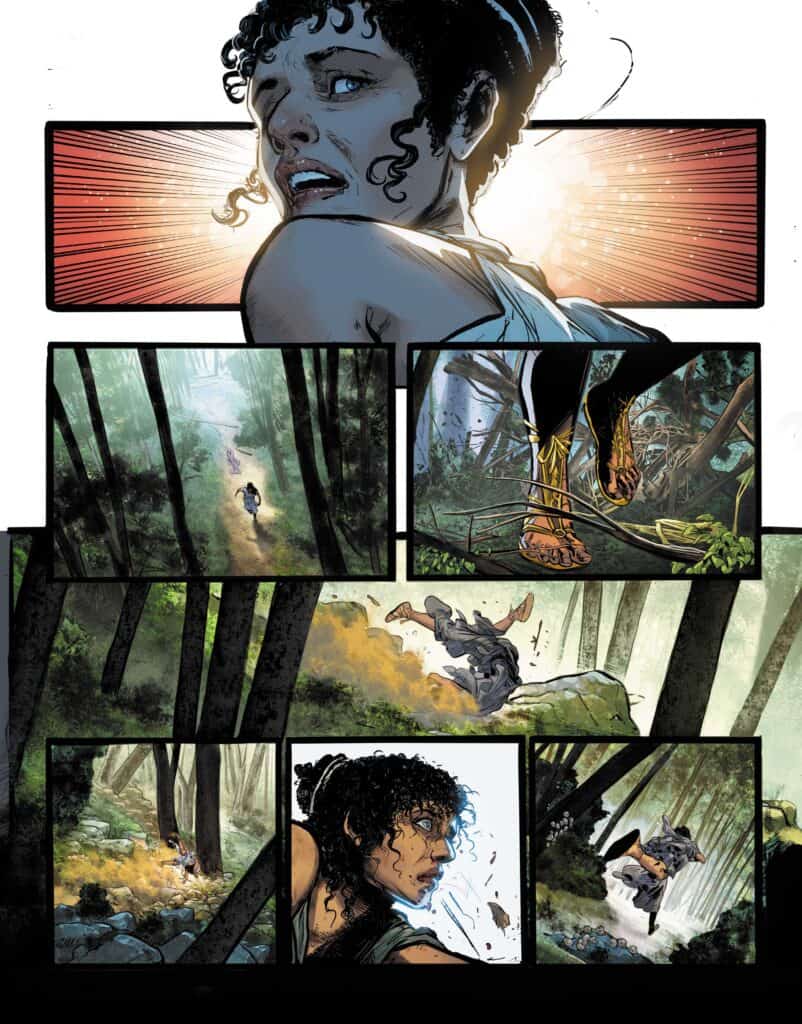 WONDER WOMAN HISTORIA: THE AMAZONS – Series Launch October 19, 2021
Best-selling DC talent Kelly Sue DeConnick (Aquaman) and Phil Jimenez (Wonder Woman By Phil Jimenez Omnibus) launches one of the most highly-anticipated releases of the year. Millennia ago, Queen Hera and the goddesses of the Olympian pantheon grew greatly dissatisfied with their male counterparts… and far from their sight, they put a plan into action. A new society was born, one never before seen on Earth, capable of wondrous and terrible things, but their existence could not stay secret for long. When a despairing woman named Hippolyta crossed the Amazons’ path, a series of events was set in motion that would lead to an outright war in heaven—and the creation of the Earth’s greatest guardian! One of the most unforgettable DC tales of all time begins here, with subsequent issues featuring art by modern masters Gene Ha and Nicola Scott releasing in the spring and autumn of 2022. 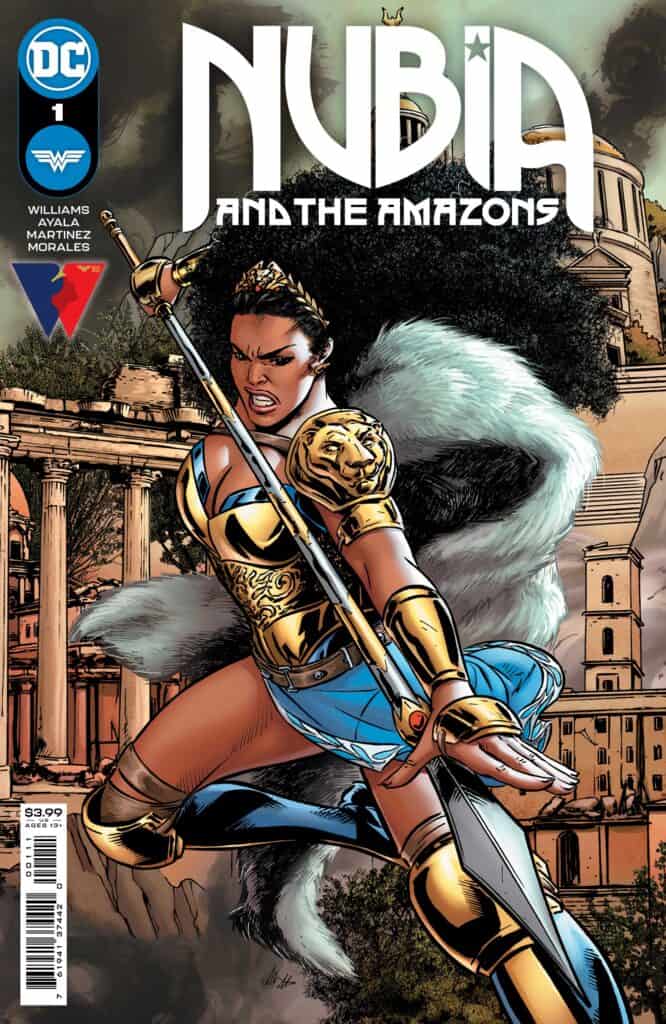 NUBIA & THE AMAZONS – Series Launch October 5, 2021
The world will know her name! Follow the ongoing adventures of Nubia with this unforgettable miniseries written by Vita Ayala and Stephanie Williams with art from all-star artist Alitha Martinez (Future State). After the thrilling events of Infinite Frontier, Nubia becomes queen of Themyscira, but the new title also brings challenges. With the unexpected arrival of new Amazons, our hero is forced to reckon with her past and forge a new path forward for her sisters. Little does she know, a great evil grows beneath the island and it’s up to this former guardian of Doom’s Doorway to unite her tribe before paradise is lost forever! 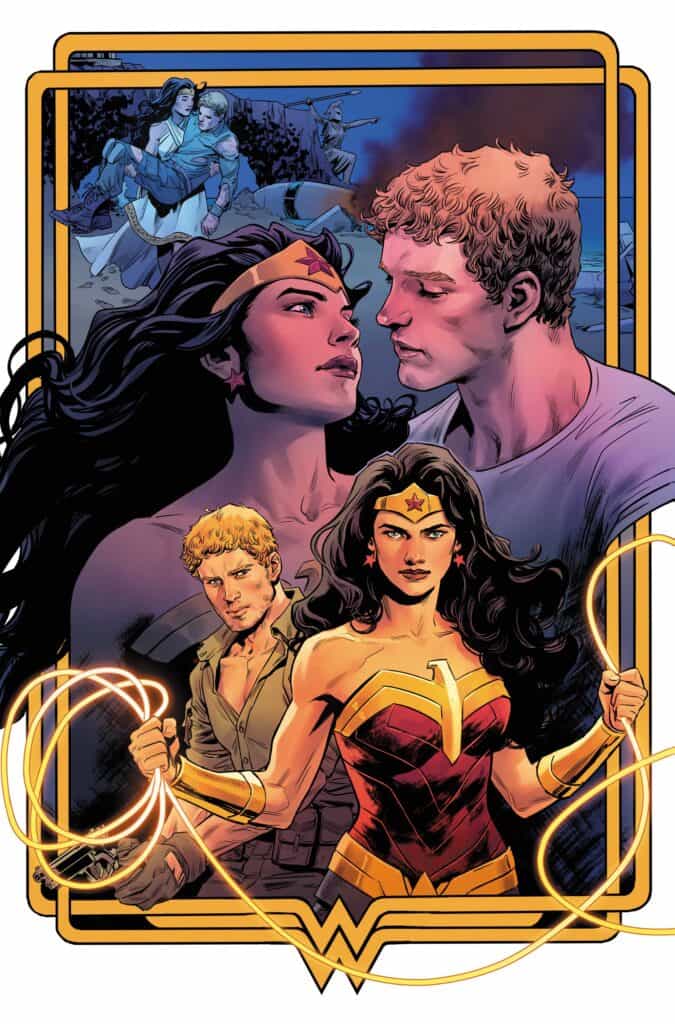 WONDER WOMAN #780 – Out October 12, 2021
The iconic Super Hero returns in the ongoing Wonder Woman series featuring writers Becky Cloonan and Michael W. Conrad and art by Travis Moore. After the events of Death Metal, Diana finally makes it back from her unforgettable odyssey through the Sphere of the Gods! Has the world moved on without her? This special oversize story paves the way into an exciting new future for the greatest hero of them all. 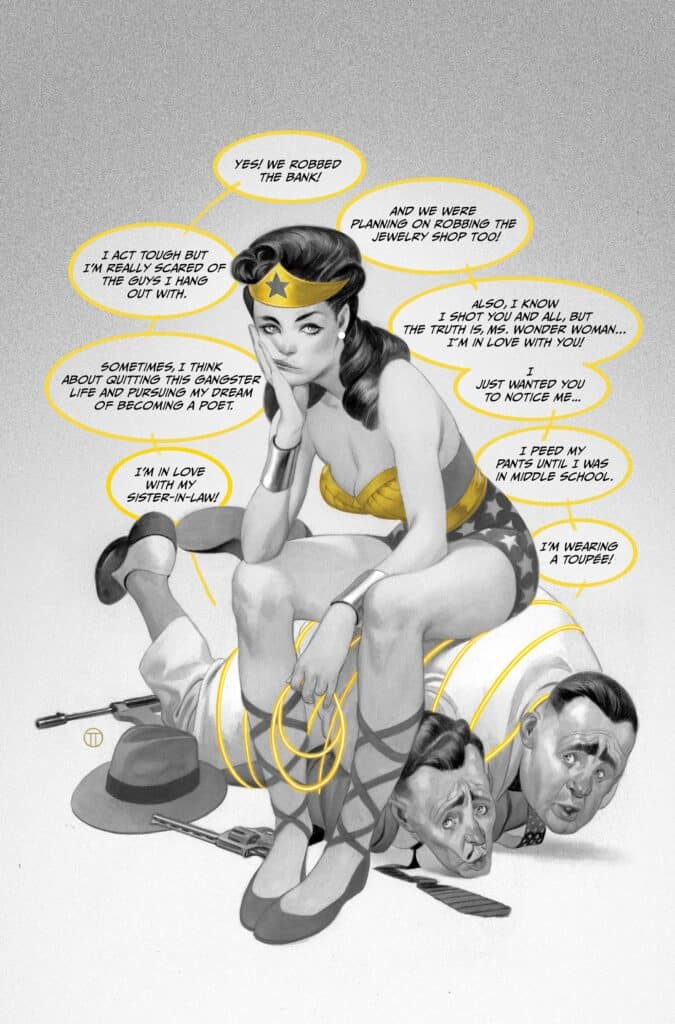 WONDER WOMAN BLACK & GOLD #5 – Out October 26, 2021
Prepare to be whisked away with an Amazon fairy tale, flown back to World War II, swept up in a nautical ghost story, and blasted by a bitter space princess! Don’t miss the penultimate issue of this golden moment for Diana and her legacy written by Peter J. Tomasi, Kurt Busiek, Sanya Anwar, Trung Le Nguyen, and Josie Campbell, with art by Christian Alamy, Ben Dewey, Sanya Anwar, Trung Le Nguyen, and Carlos D’anda. 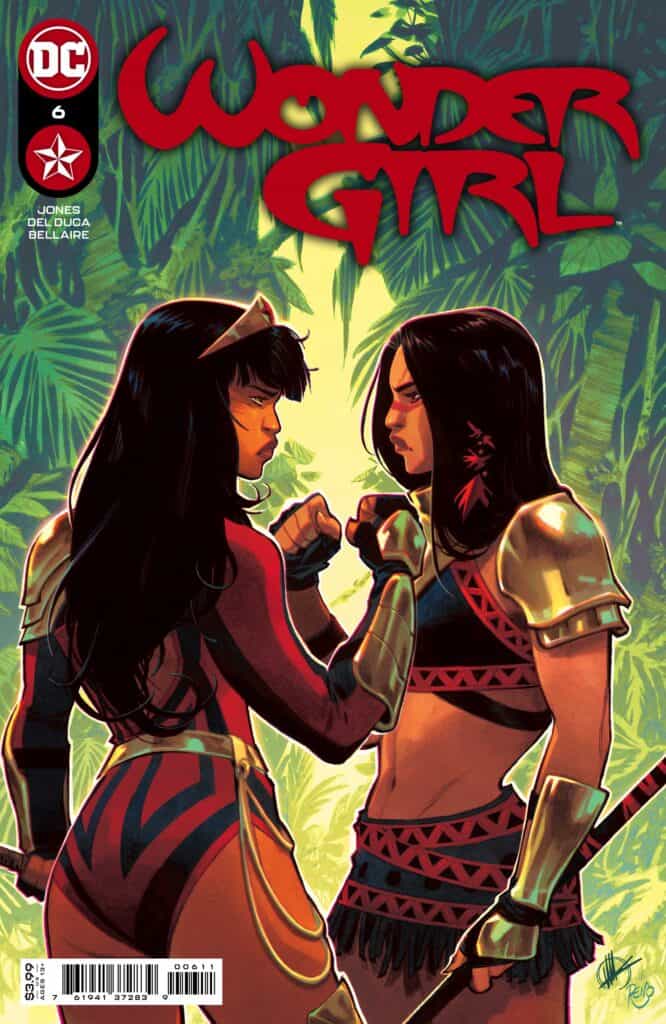 WONDER GIRL #6 – Out October 26, 2021
In the latest issue written by Joëlle Jones with art by Leila del Duca, after encountering Wonder Girl and Artemis, Yara believes now more than ever that she needs to find her lost sisters. Only they hold the answers to the trauma of her past and fear of the future. Is Yara a hero? Or is she a weapon of the gods wielded to destroy all Amazons? 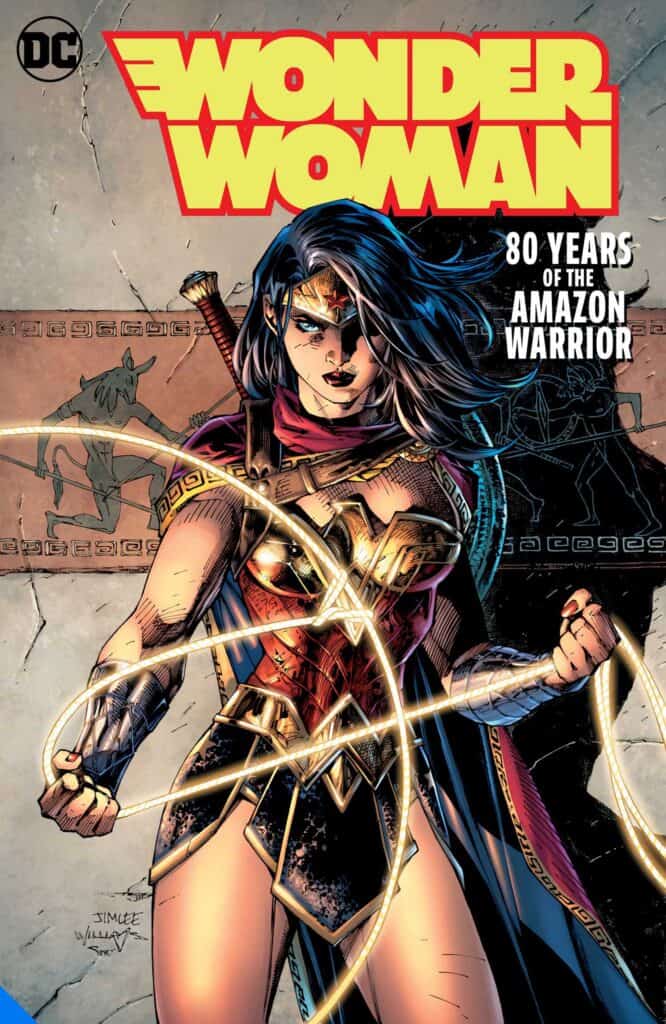 WONDER WOMAN: 80 YEARS OF THE AMAZON WARRIOR– Out September 14, 2021
Featuring acclaimed DC writers and artists like George Pérez, Phil Jimenez, William Moulton Marston, Harry G. Peter, Joye Hummel, Jill Thompson, Greg Rucka, Nicola Scott, Becky Cloonan, and Jen Bartel, this hardcover special edition spans over 400 pages and follows the famous Amazon Warrior in her enduring fight for justice. Starting from the first appearance of Wonder Woman through some of her most incredible battles against foes like the Cheetah and Ares, this can’t-miss collection of Wonder Woman through her eight decades of heroism. It includes new essays and interviews about the enduring legacy of the iconic Super Hero from Gal Gadot, Lynda Carter, Patty Jenkins, and Trina Robbins as well as never-before-collected stories. 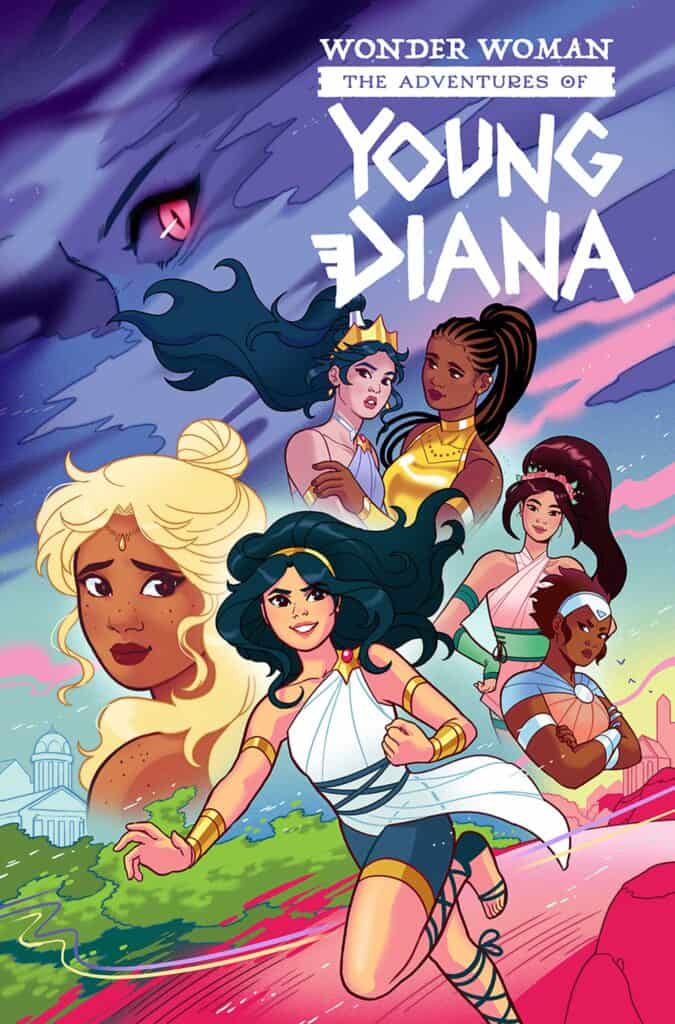 WONDER WOMAN: ADVENTURES OF YOUNG DIANA SPECIAL – Out October 12, 2021
Collected together for the first time, these backup stories by Eisner Award-winner Jordie Bellaire and rising star Paulina Ganucheau provide an intimate look into Wonder Woman’s upbringing and the dangerous secrets of her past. The young princess of Themyscira struggled to find her place on an island deemed paradise by many, but which is, to her, a prison. Trapped in her role as a royal and shielded from the harsh realities of Man’s World, Diana yearned for adventure, or at least a purpose. When ancient texts portraying her home’s history go missing, she gets both. How far will our hero go to find the texts and the truths they’re hiding? 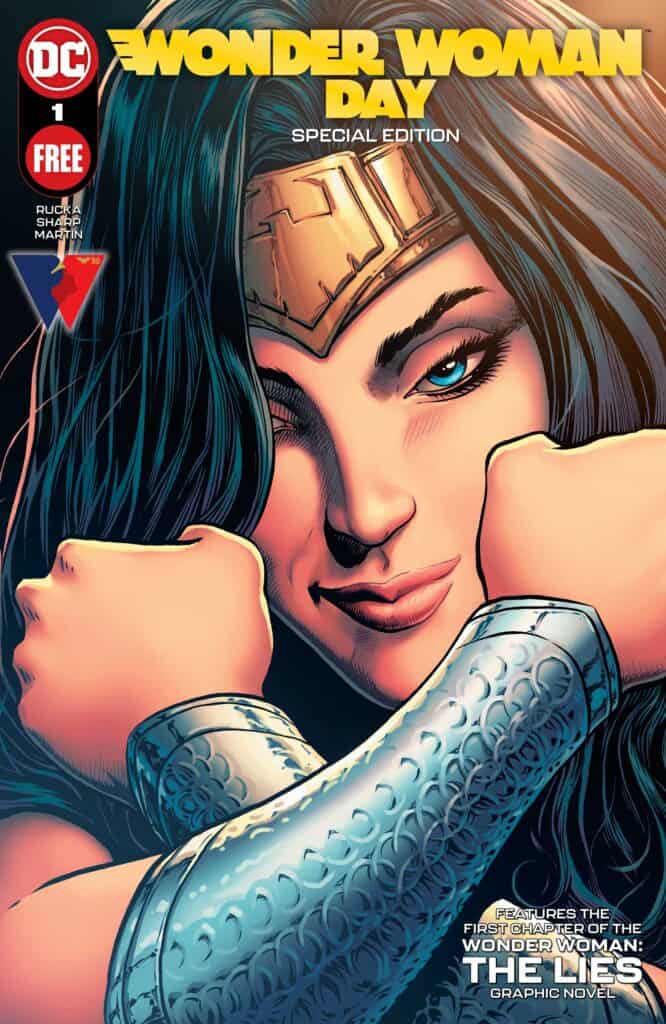 WONDER WOMAN #1 – Free Special Edition Out October 19, 2021
Celebrate 80 years of the Amazon Warrior with this special edition of the first issue of the acclaimed series by DC superstars Greg Rucka and Liam Sharp, kicking off the epic storyline, “The Lies.” Why has the lasso of truth stopped working? Start down the rabbit hole as dark secrets from Wonder Woman’s past unravel her present! 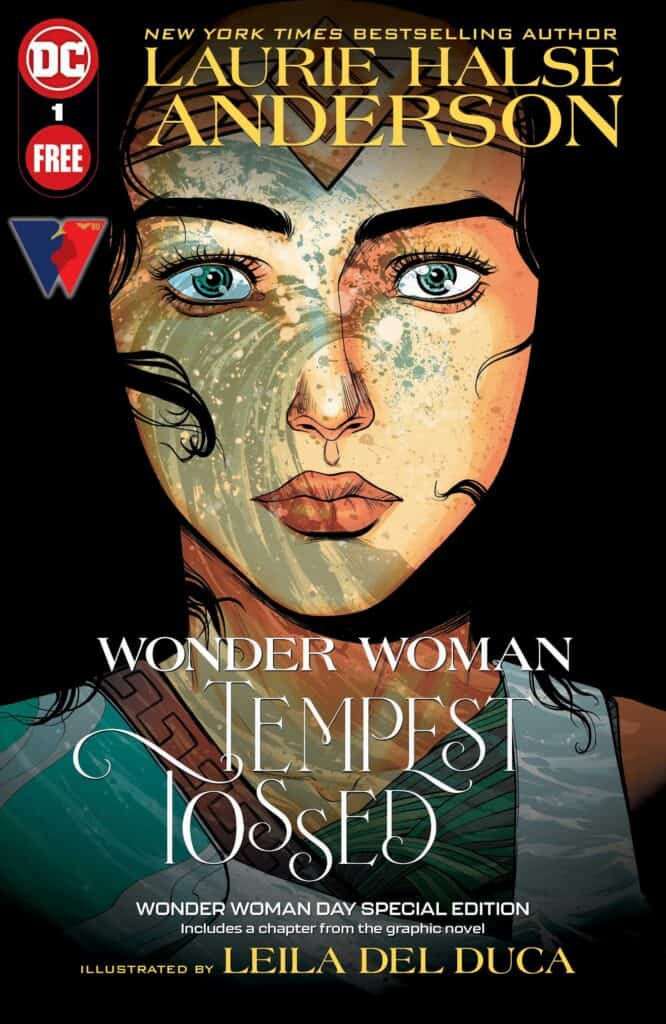 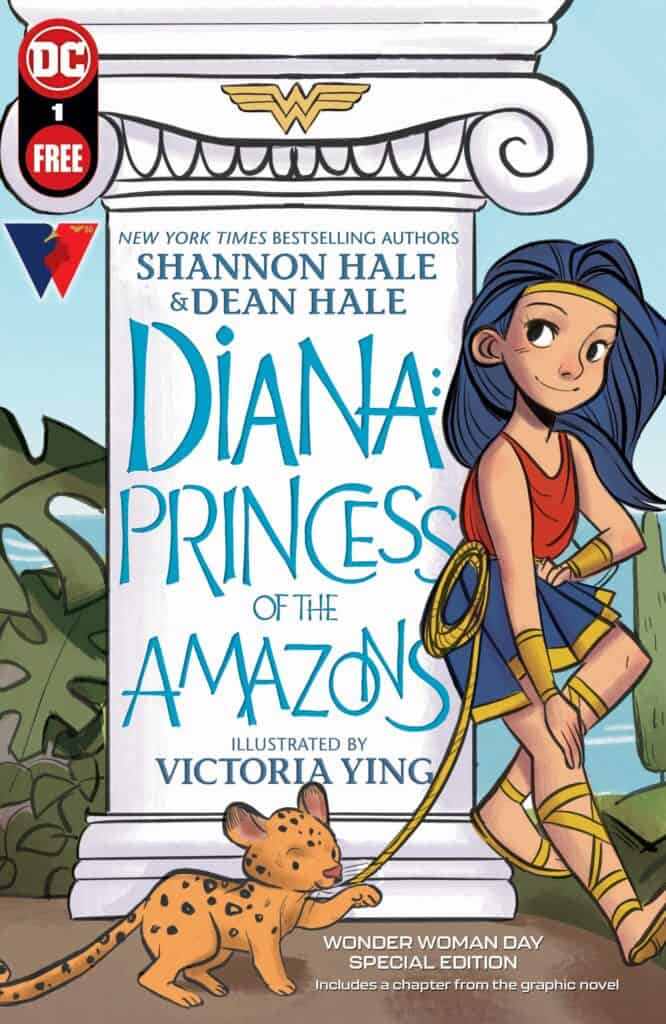 DIANA PRINCESS OF THE AMAZONS – Free Special Edition Out October 19, 2021
From The New York Times bestselling authors Shannon and Dean Hale comes a story about making mistakes, learning the hard way, and becoming a hero. Eleven-year-old Diana is the only child on the island of Themyscira. Wanting someone her own age to talk to, she takes matters into her own hands and creates a playmate out of clay. But things quickly get out of control and Diana must decide whether she’s made a new friend…or a monster! This special edition features an extended sample from the full-length graphic novel with art from Victoria Ying.

Plus, fans can delve into the history and enduring influence of the iconic character this October with the “Wonder Woman Authors & Talent Panel” on DC Community.
Follow DC on Twitter, Instagram and Tik Tok for more information Wonder Woman 80, and make sure not to miss DC FanDome on October 16 for special Wonder Woman 80th Anniversary reveals!