Image Comics has just announced that the Eisner Award-winning series Paper Girls,  the mind-bending storytelling of Lost meets the ’80s nostalgia of Stand by Me by Brian K. Vaughan and Cliff Chiang with colors by Matt Wilson will be collected in its entirety into a trade paperback compendium. Paper Girls: The Complete Story will feature new cover art by Chiang this Fall from Image Comics.

Vaughan, in a press release from the publisher, said:

“I’m so proud of this story and I think our young heroes’ complex journey through time reads particularly well in one epic binge-read, so this gorgeous new collection is the perfect way to enjoy the entire series, currently being adapted as an amazing television show for Amazon Prime!”

According to an exclusive with DEADLINE,  Always Be My Maybe star and Baby Cobra comedian Ali Wong has joined Amazon’s Paper Girls series, based on Brian K. Vaughan and Cliff Chiang’s graphic novel, from Amazon Studios, Legendary TV and Plan B. Wong will lead the series along with Sofia Rosinksy, Camryn Jones, Riley Lai Nelet and Fina Strazza. Stephany Folsom and Christopher C. Rogers will co-showrun. Vaughan, Chiang, Plan B, Christopher Cantwell and the showrunners will serve as executive producers for the series, which is set to film in Chicago this year.”

Paper Girls follows four twelve-year-old newspaper delivery girls from the year 1988 who uncover the most important story of all time. Suburban drama and otherworldly mysteries collide in this critically acclaimed series about nostalgia, first jobs, and the last days of childhood.

“We had so much fun filling these thirty issues with mystery, friendship, and giant robots, and I’m thrilled to present this hefty volume for anyone who wants to dive into the whole story.” 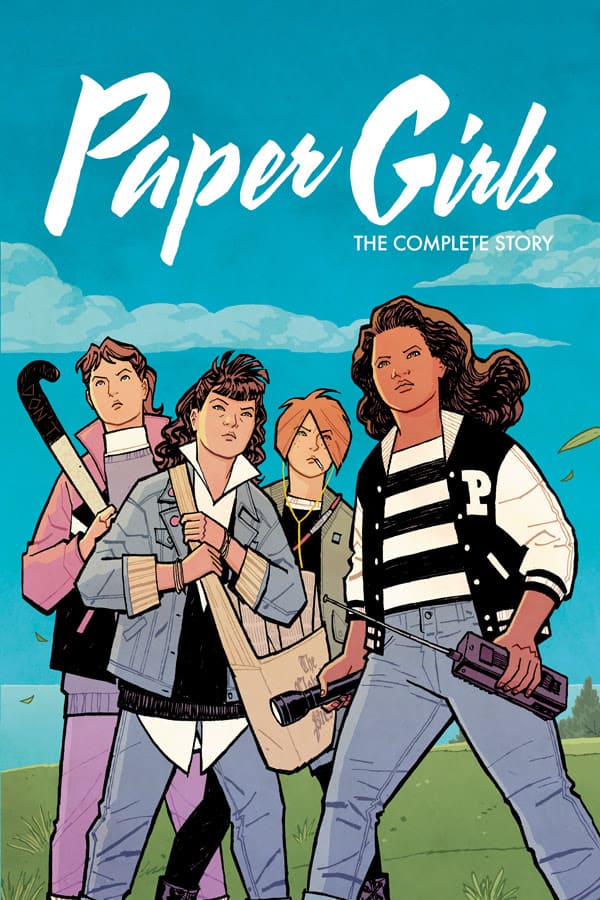 Paper Girls: The Complete Story trade paperback (ISBN: 978-1534319998, Diamond Code: AUG210107) will collect the complete series, issues #1-30, and be available on Wednesday, October 27 and in bookstores on Tuesday, November 2. It can be pre-ordered at your local comic book shop or independent bookstore via Bookshop or IndieBound, or it can be pre-ordered on Amazon, Barnes & Noble, Books-a-Million, and Indigo.