NEWS WATCH: Erica Battles the Most Dangerous Monster Yet in SOMETHING IS KILLING THE CHILDREN #25

BOOM! Studios revealed a first look at the oversized special issue SOMETHING IS KILLING THE CHILDREN #25 from GLAAD Award-winning author James Tynion IV (The Nice House on the Lake, The Department of Truth), acclaimed artist Werther Dell’Edera (Razorblades), colorist Miquel Muerto (House of Slaughter), and letterer AndWorld Design (We Only Find Them When They’re Dead). Celebrate 25 blood-stained issues with the milestone oversized special this July 2022.

With over two million copies of the series sold to date, the first arc of Erica’s mission in Tribulation reaches its shocking conclusion in this milestone anniversary issue that no Something is Killing the Children fan will want to miss! While Erica’s blades are occupied with an entity unlike anything she’s faced, she receives a phone call… with tragedy on the other end of the line. As things look dire, someone Erica once saved may have to find unexpected help to return the favor…

SOMETHING IS KILLING THE CHILDREN is the newest release from BOOM! Studios’ eponymous imprint, home to critically acclaimed original series, including BRZRKR by Keanu Reeves, Matt Kindt, and Ron Garney; Once & Future by Kieron Gillen and Dan Mora; We Only Find Them When They’re Dead by Al Ewing and Simone Di Meo; Seven Secrets by Tom Taylor and Daniele Di Nicuolo; The Many Deaths of Laila Starr by Ram V and Filipe Andrade; Basilisk by Cullen Bunn and Jonas Scharf; Faithless by Brian Azzarello and Maria Llovet; Alice Ever After by Dan Panosian and Giorgio Spalletta; Grim by Stephanie Phillips and Flaviano; and the upcoming Briar by Christopher Cantwell and German Garcia. The imprint also publishes popular licensed properties, including Dune: House Atreides from Brian Herbert, Kevin J. Anderson, and Dev Pramanik; Mighty Morphin and Power Rangers from Ryan Parrott, Mat Groom, Moises Hidalgo, and Marco Renna; and Magic from Jed McKay and Ig Guara. 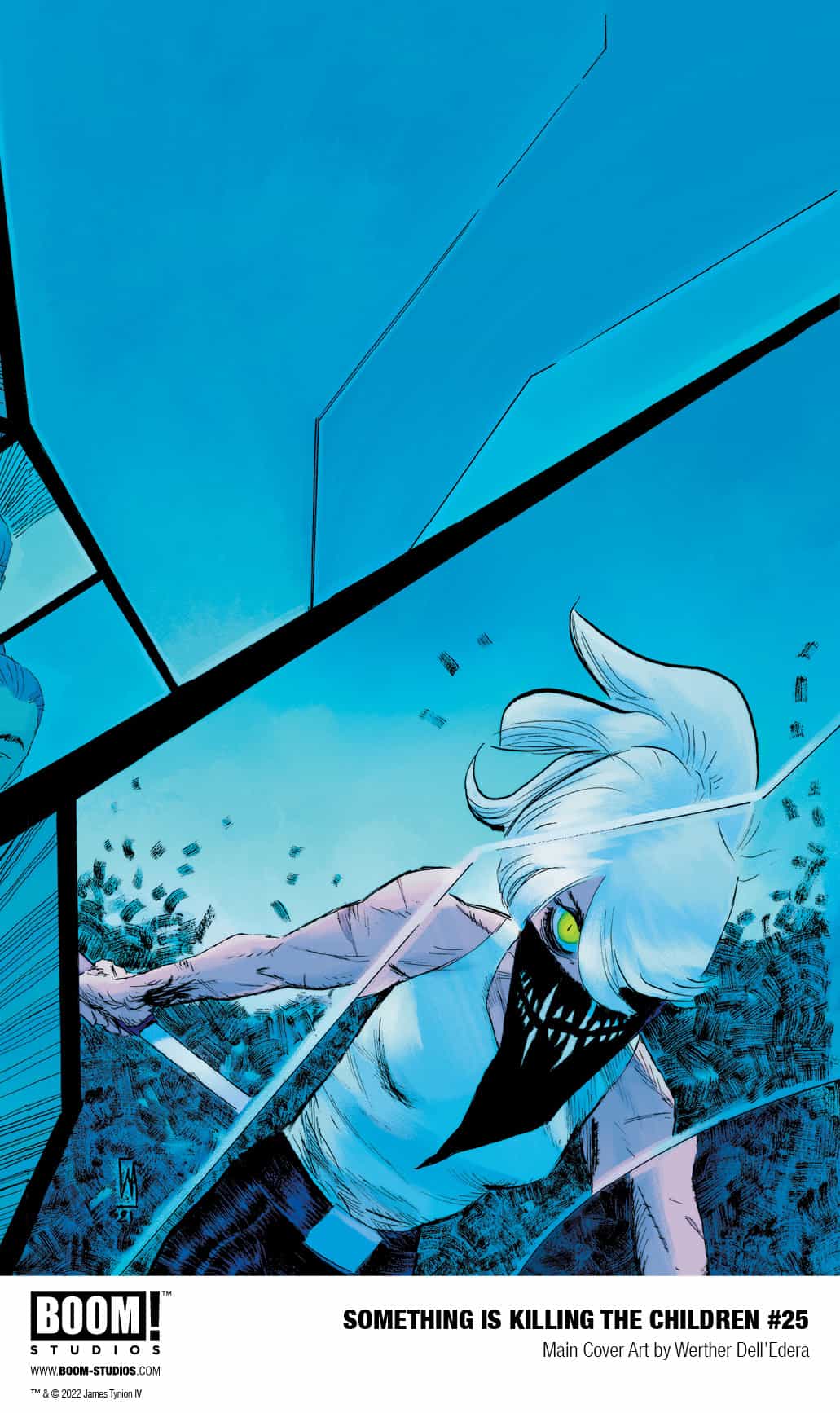 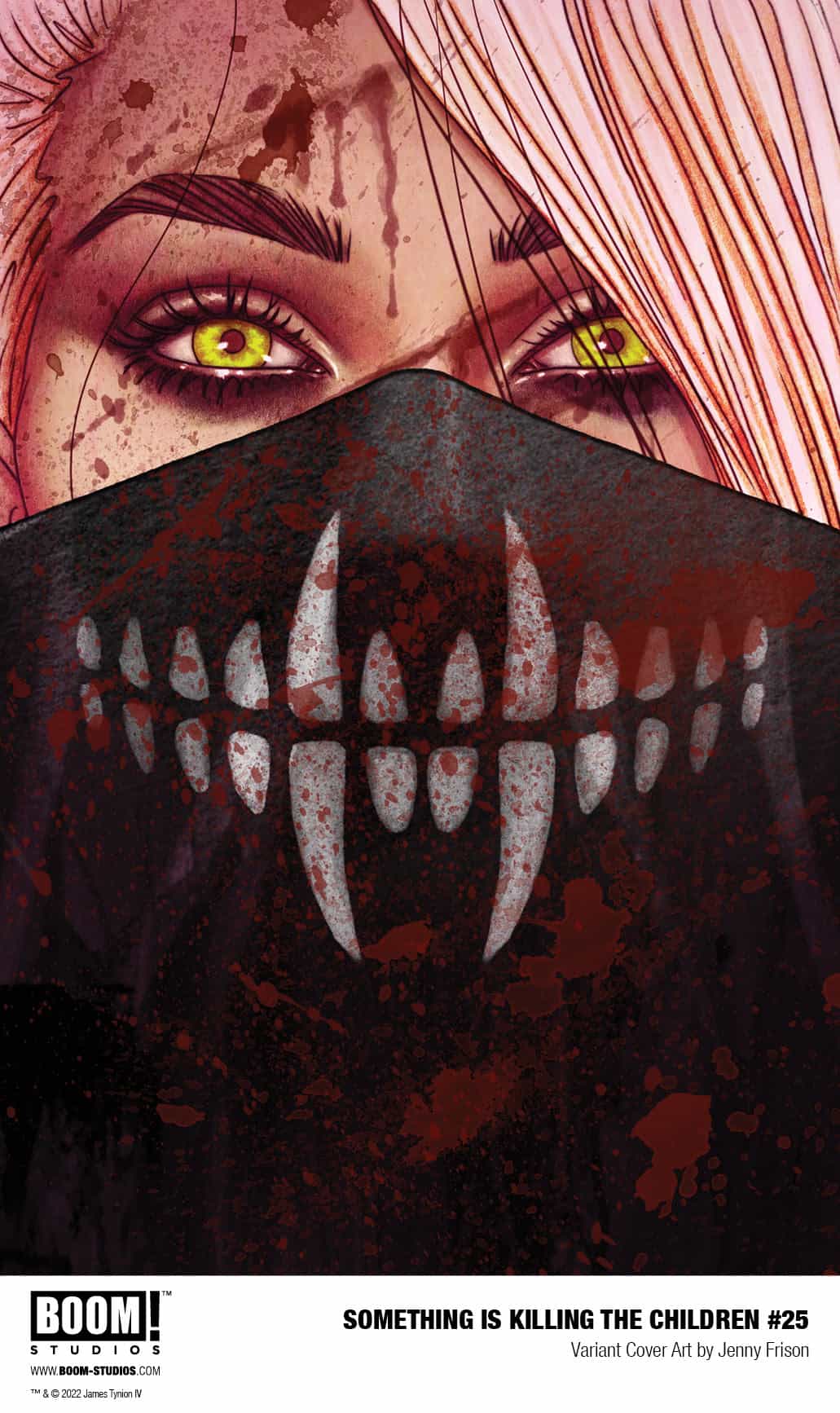 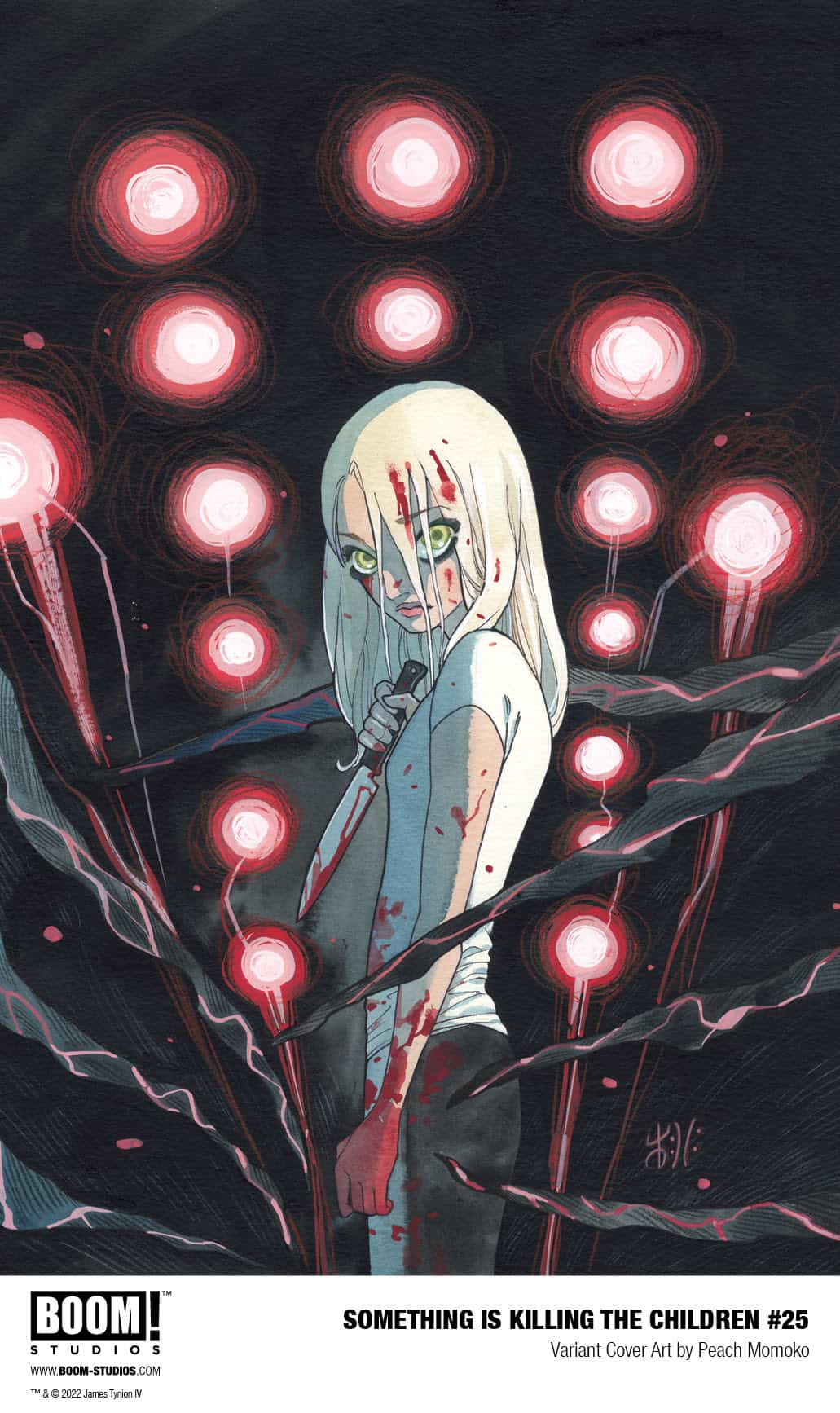 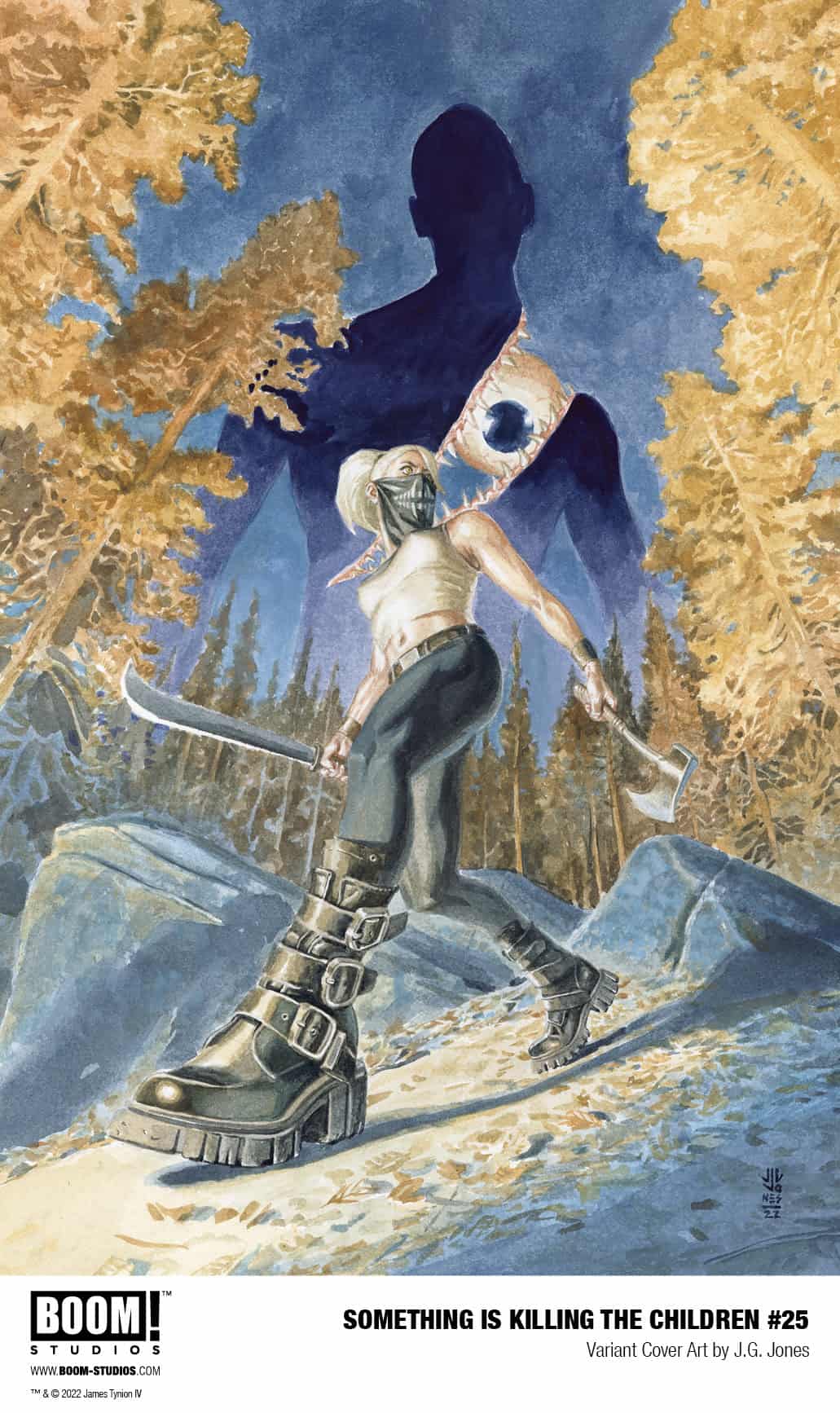 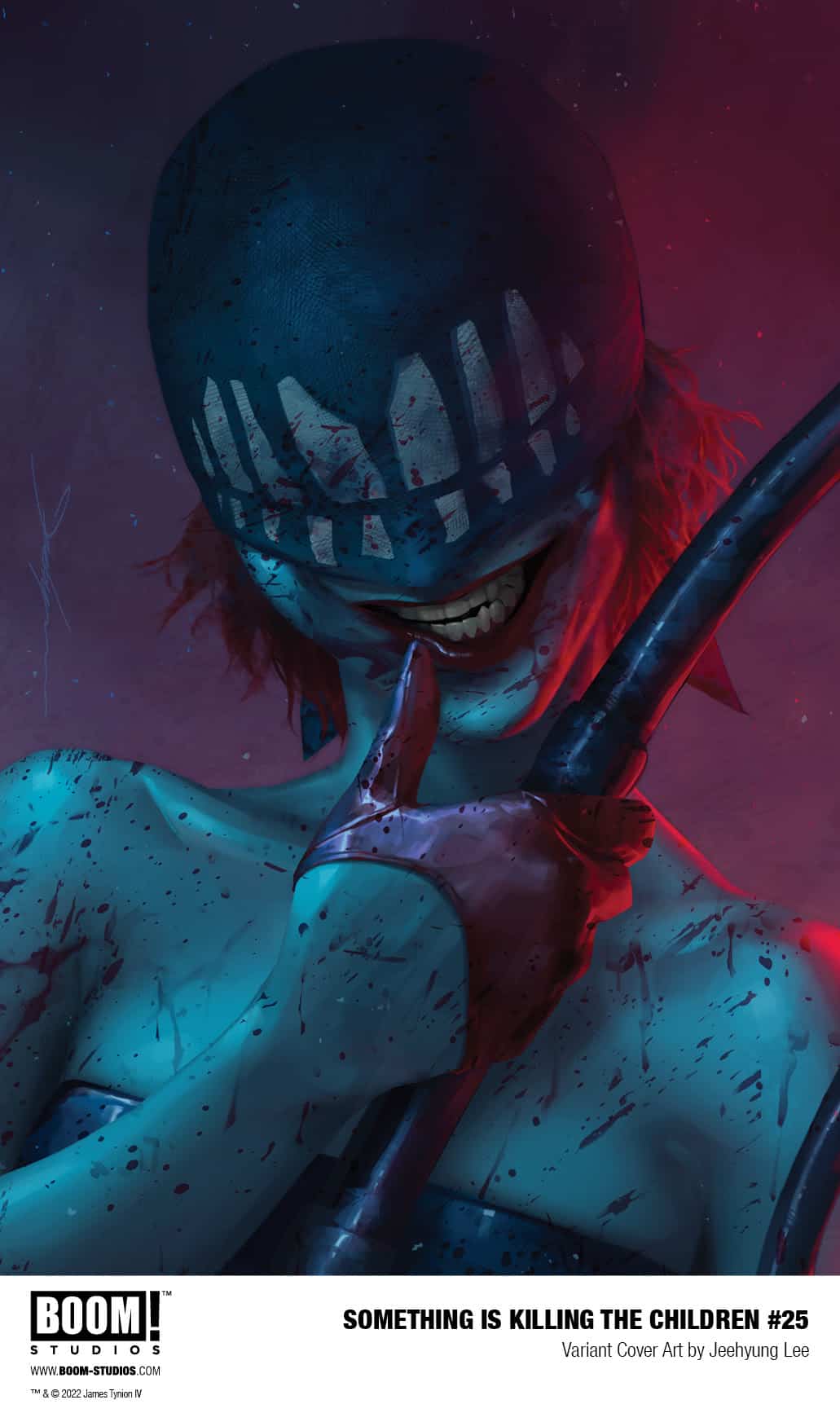 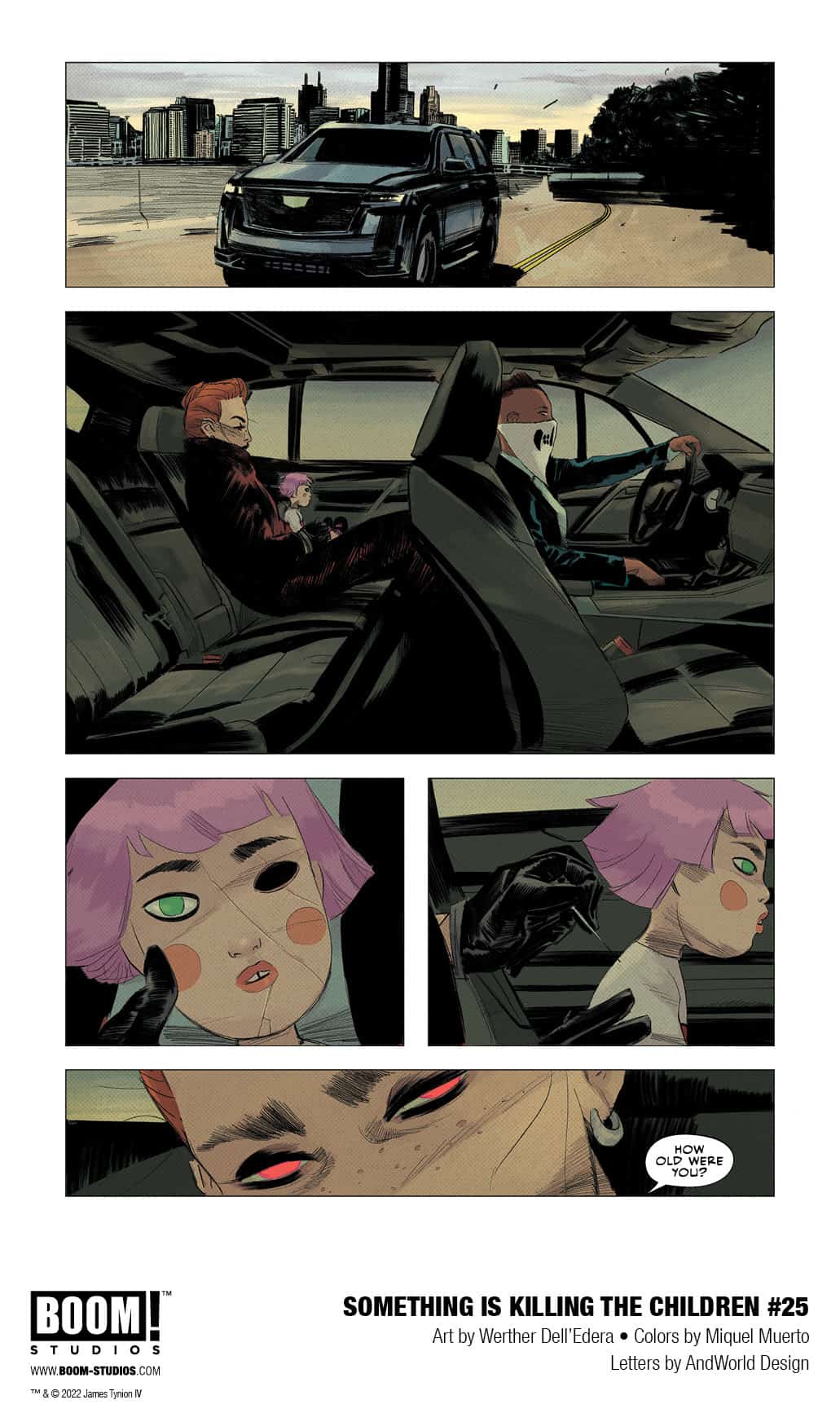 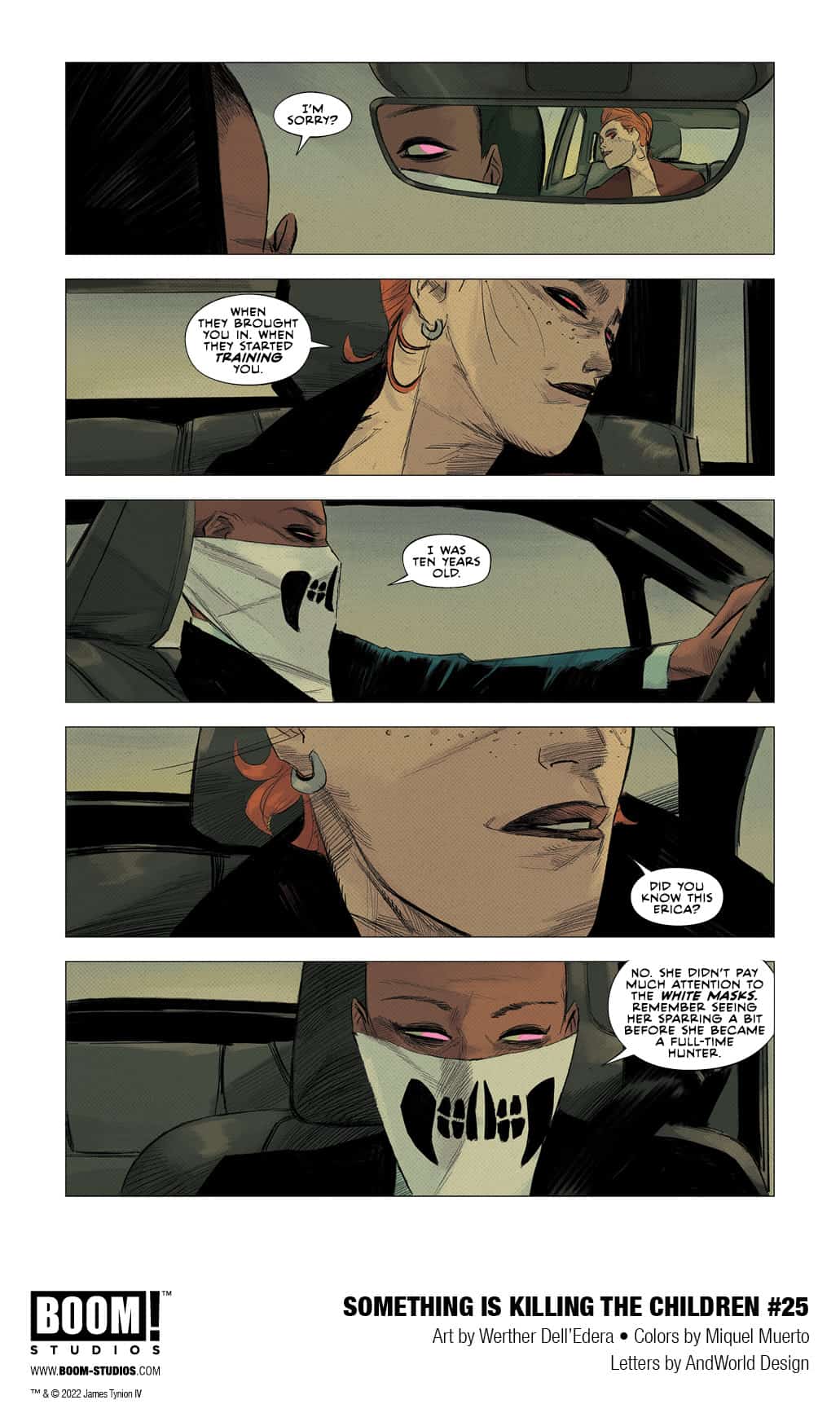 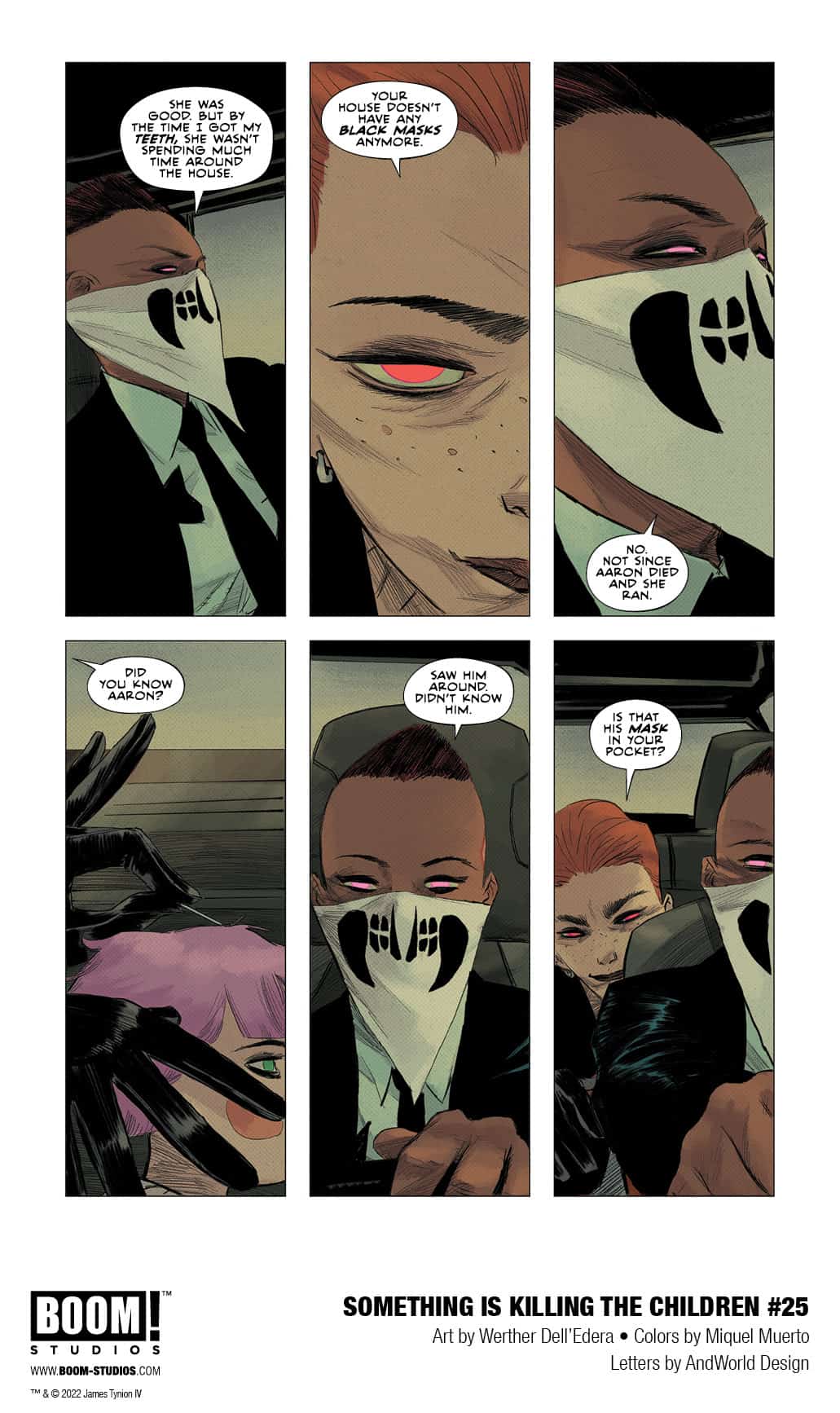 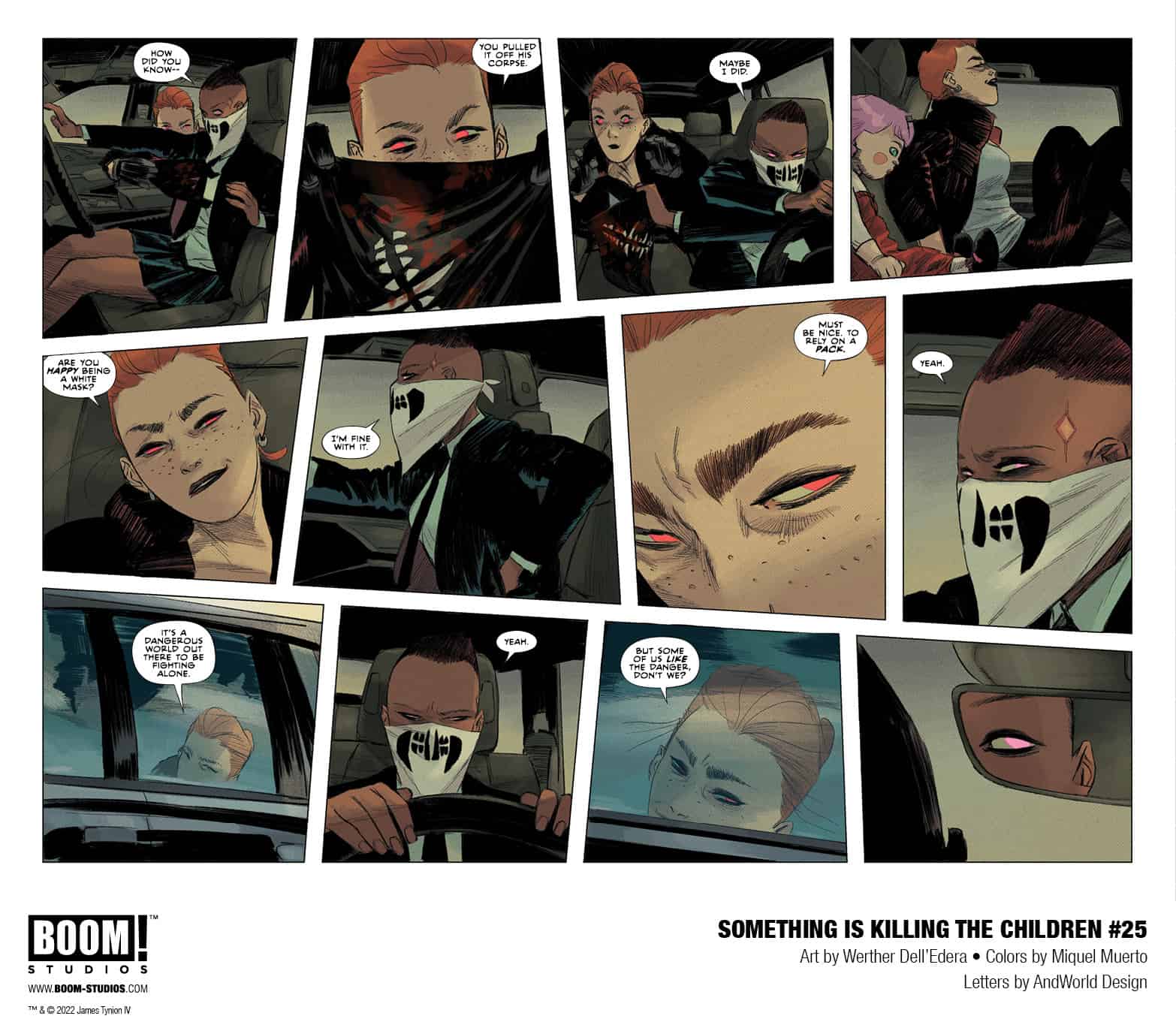 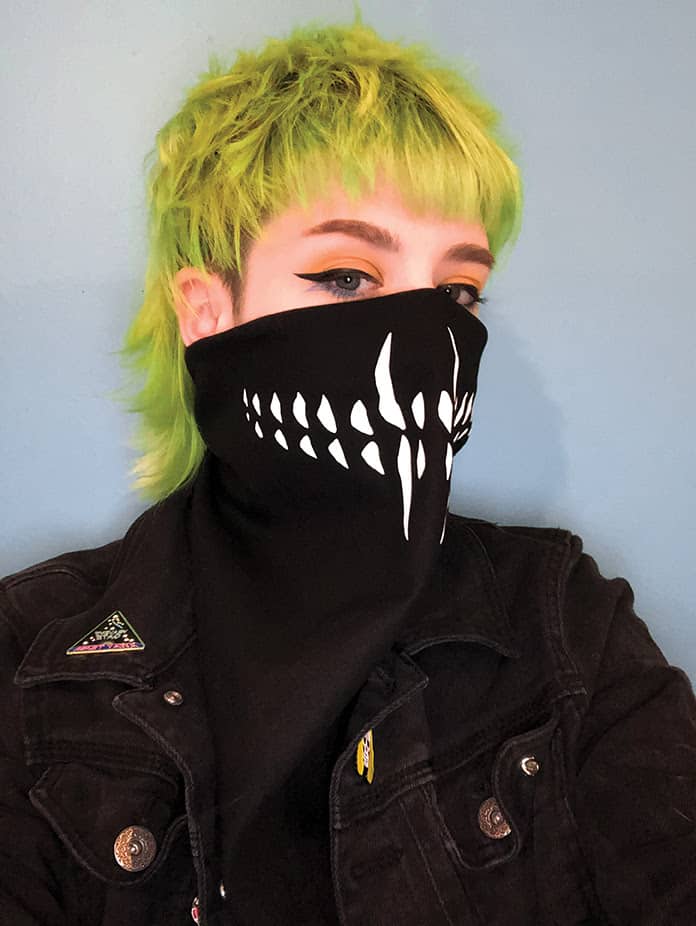 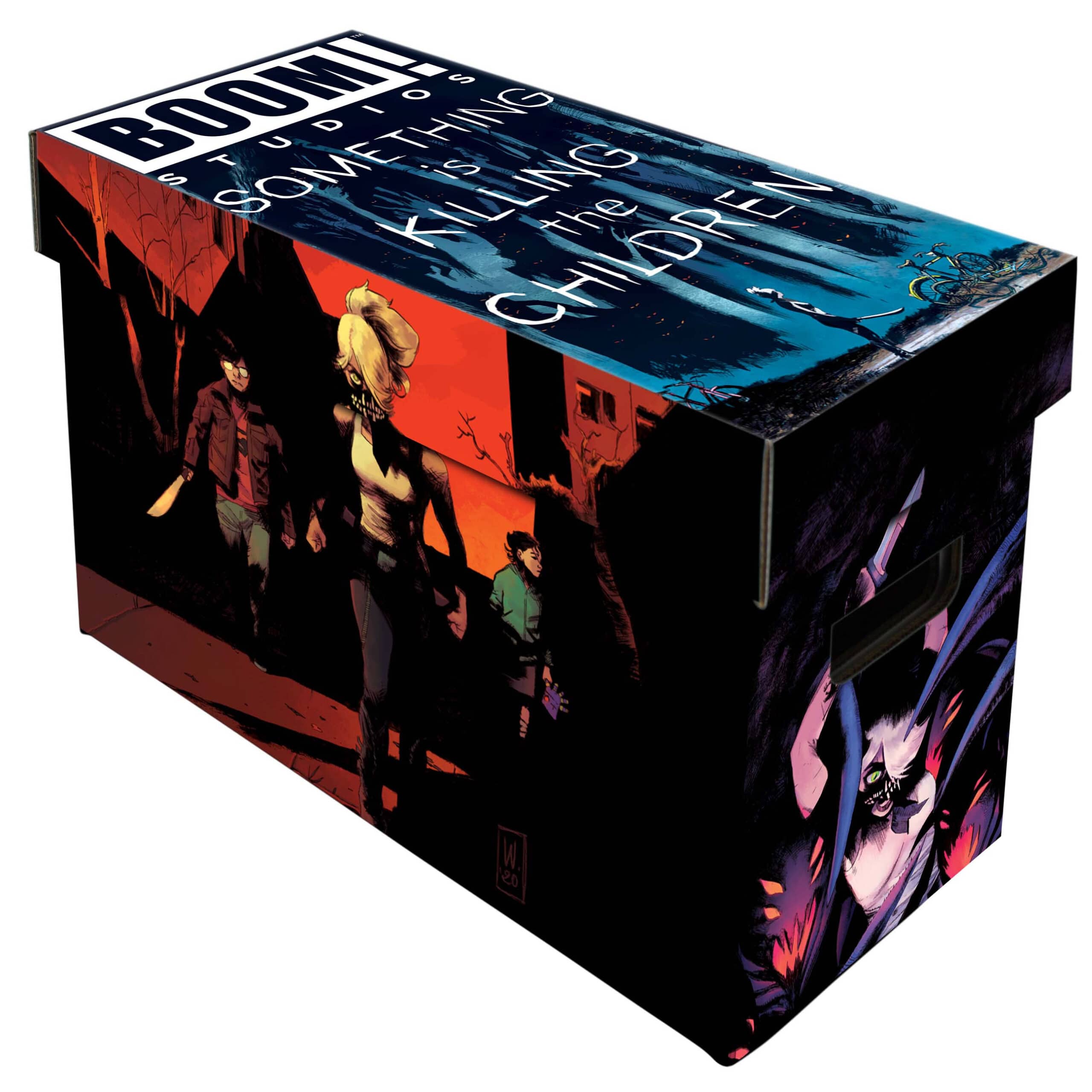 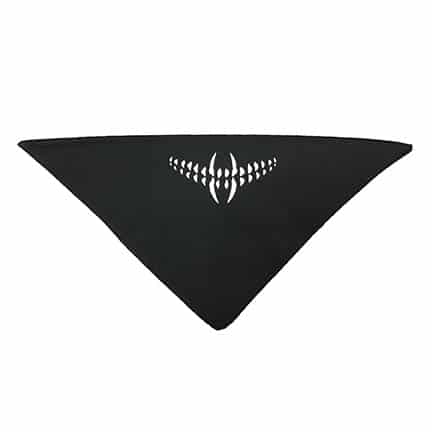 Print copies of SOMETHING IS KILLING THE CHILDREN #25 will be available for sale on July 27, 2022 exclusively at local comic book shops (use comicshoplocator.com to find the nearest one) or at the BOOM! Studios webstore. Digital copies can be purchased from content providers, including comiXology, iBooks, Google Play, and Kindle.

For continuing news on SOMETHING IS KILLING THE CHILDREN and more from BOOM! Studios, stay tuned to boom-studios.com and follow @boomstudios on Twitter.

NEWS WATCH: Erica Battles the Most Dangerous Monster Yet in SOMETHING IS KILLING THE CHILDREN #25