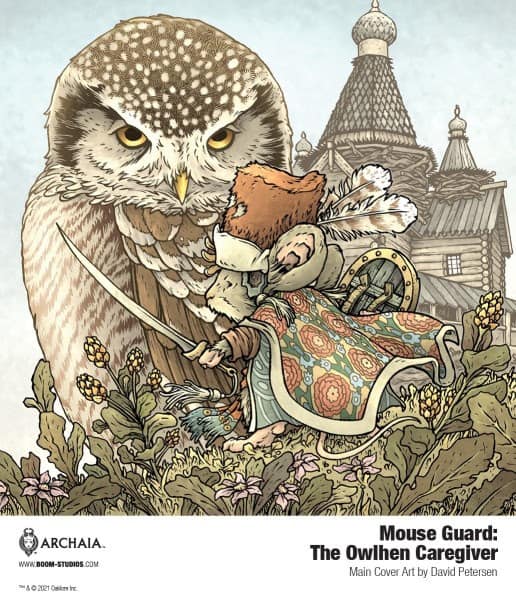 Which of life’s biggest lessons can be learned from the smallest amongst us? A young mouse learns that compassion and kindness are the great virtues in The Owlhen Caregiver. Meanwhile, Piper the Listener finds a brave mouse venturing into wild country to learn the tongues of other beasts. And finally, a grizzled oldfur shares the lesson of putting a whisker out too far in The Wild Wolf.

Mouse Guard is a New York Times Bestselling, Eisner & Harvey Award winning comic book series written and illustrated by David Petersen. Digging into his love of animal stories and medieval role playing games, David created a fantasy adventure world of cloaked, sword wielding mice who protect the common mouse against threats of predator, weather, & wilderness. The stories are released as a series of miniseries available as individual comic issues first, and then collected into hardcover volumes.

MOUSE GUARD is the latest release from BOOM! Studios’ ambitious Archaia imprint, home to graphic novels such as Bolivar by Sean Rubin; Slaughterhouse-Five by Kurt Vonnegut, Ryan North, and Albert Monteys; The Sacrifice of Darkness by Roxane Gay, Tracy Lynne-Oliver, and Rebecca Kirby; Big Black: Stand at Attica by Frank “Big Black” Smith, Jared Reinmuth, and Améziane, We Served the People by Emei Burell, and licensed series including Lev Grossman’s The Magicians by Lilah Sturges and Pius Bak, as well as Jim Henson’s The Dark Crystal: Age of Resistance and Jim Henson’s Labyrinth: Coronation. 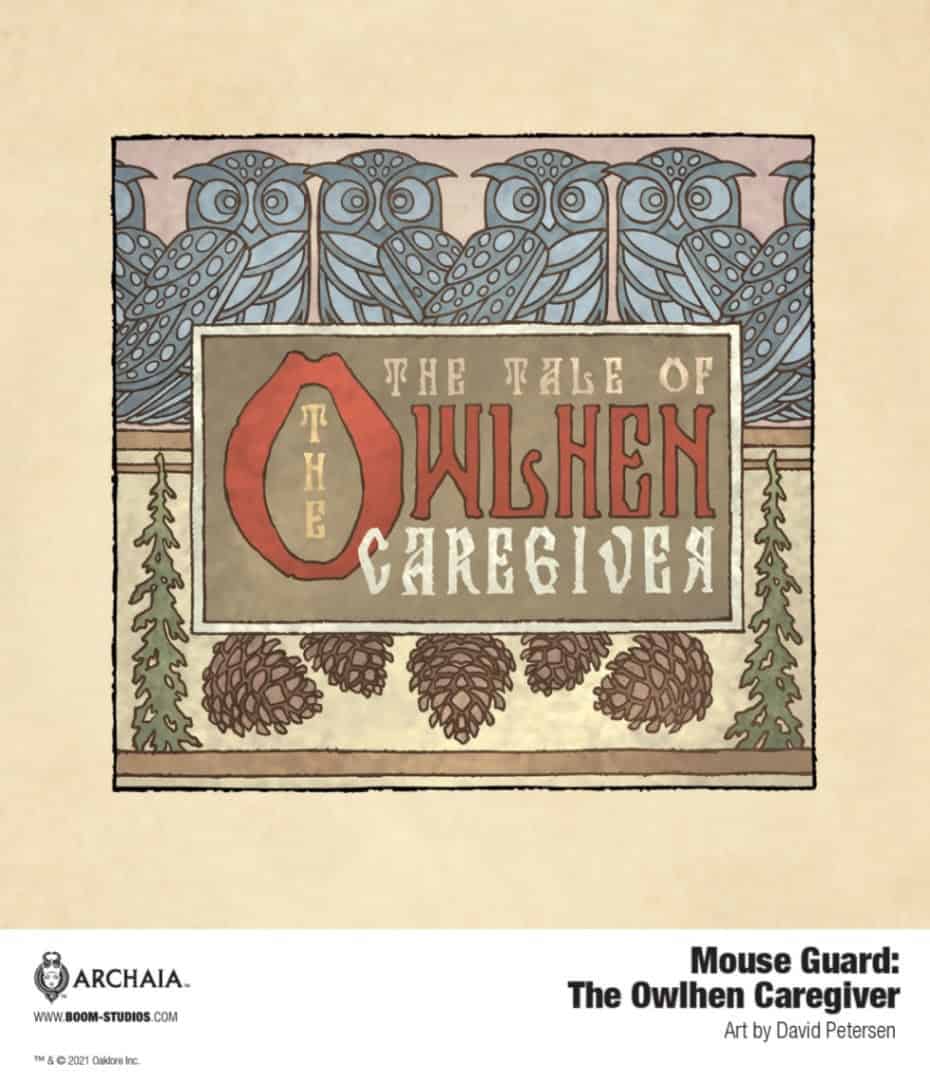 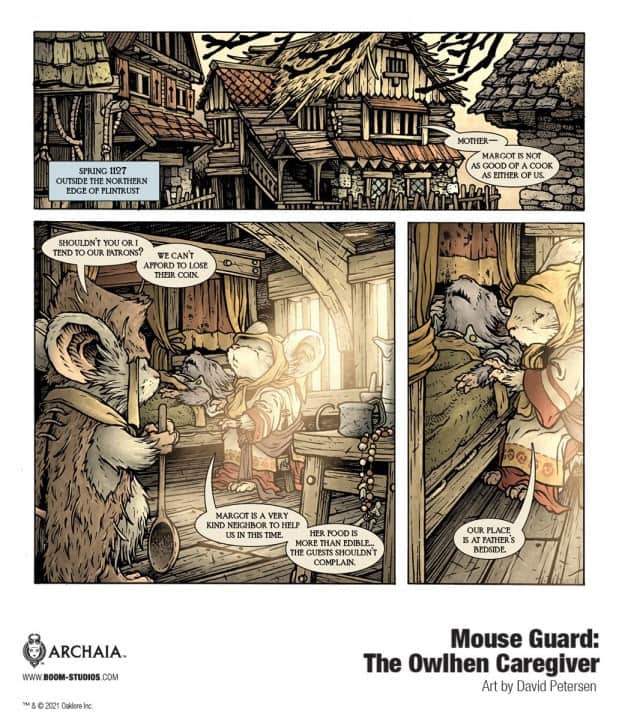 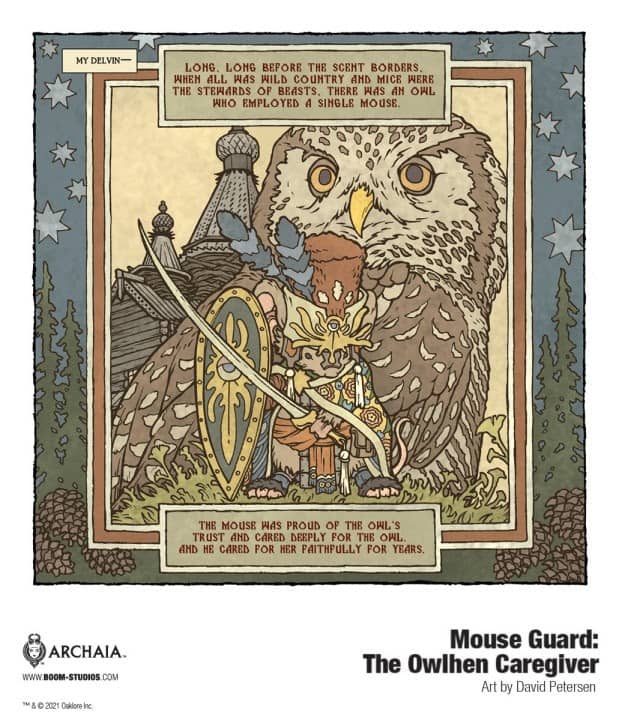 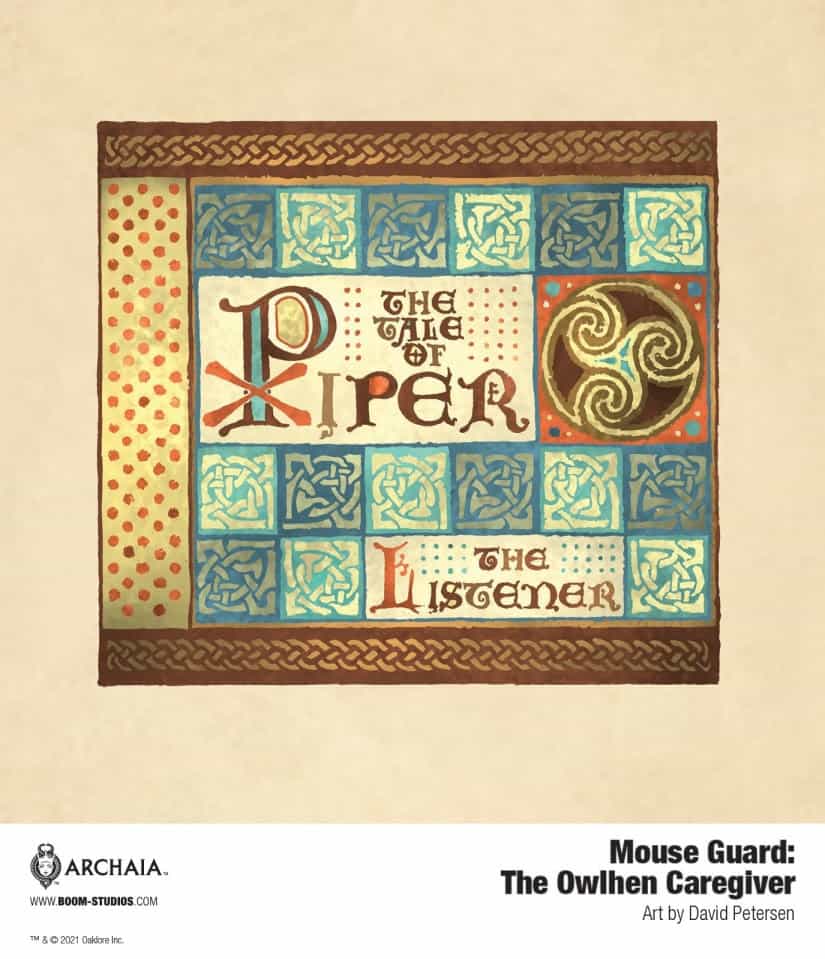 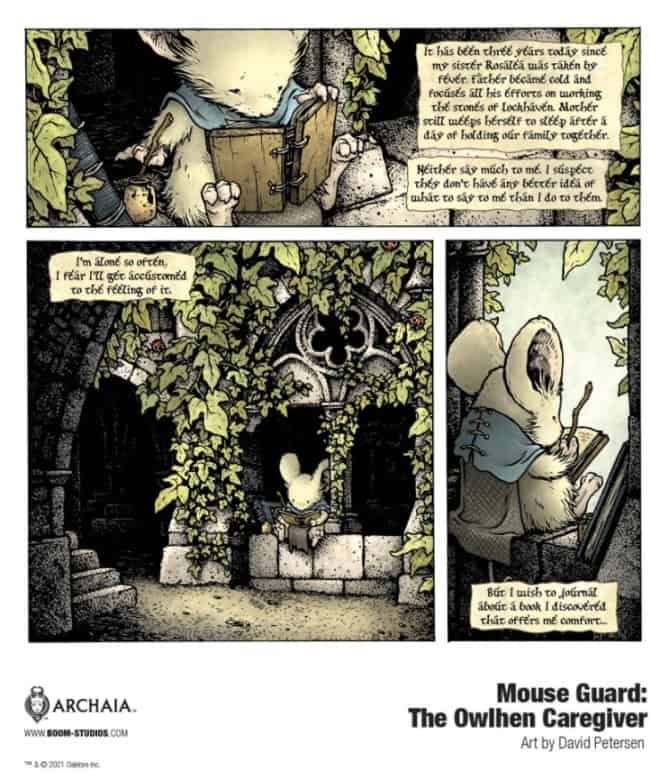 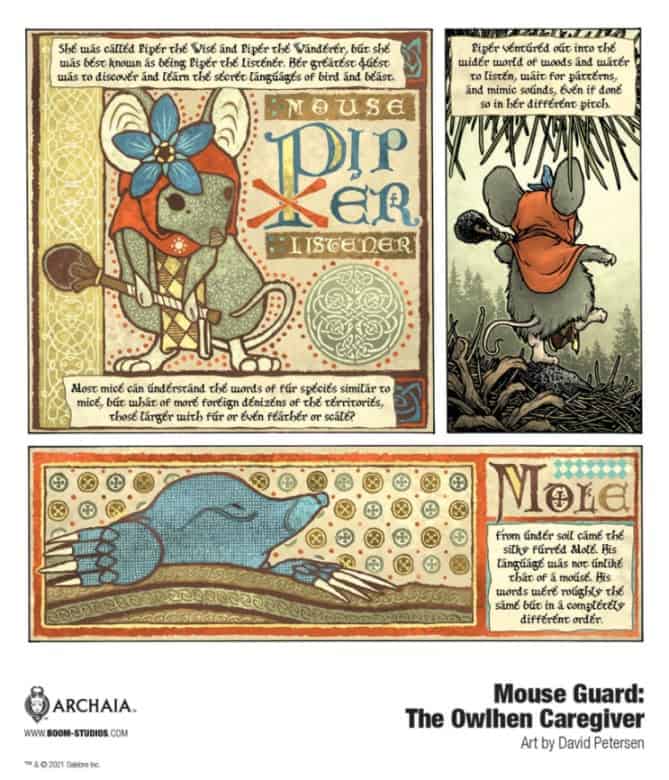 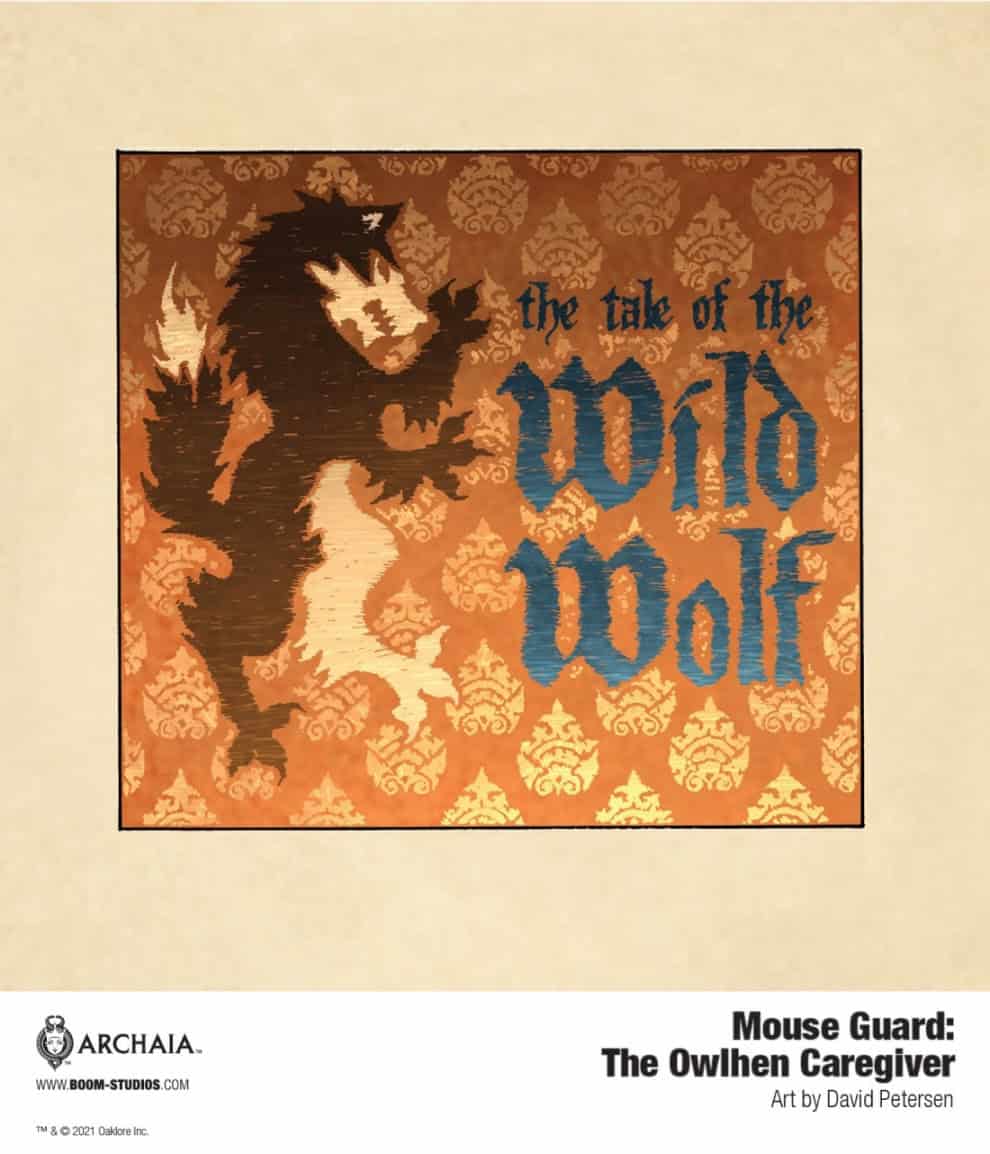 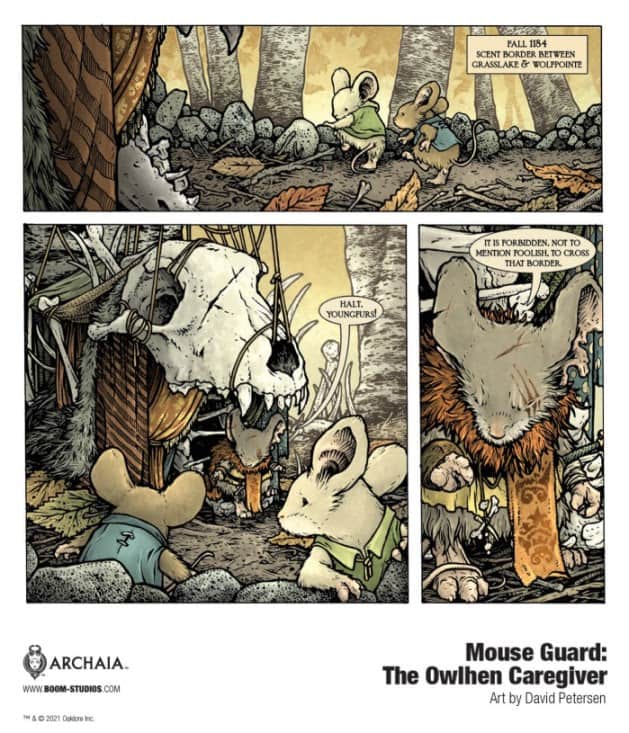 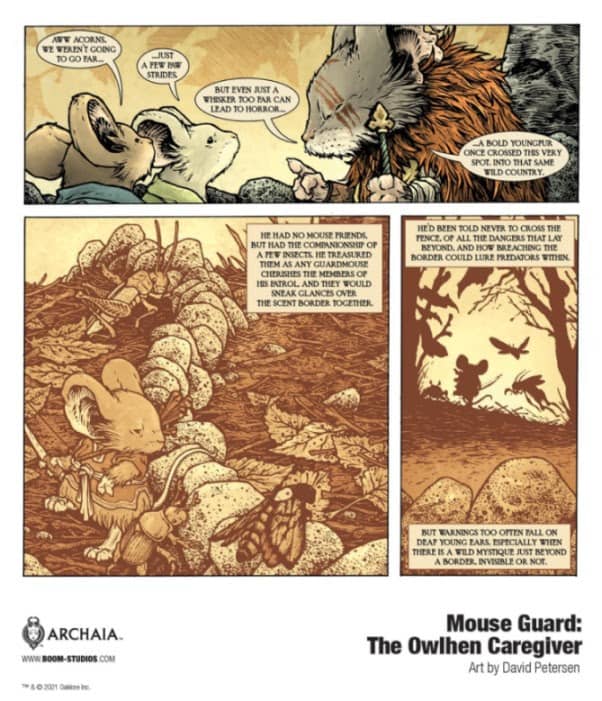 Print copies of MOUSE GUARD: THE OWLHEN CAREGIVER, featuring cover art by Petersen, will be available for sale on July 14, 2021 exclusively at local comic book shops (use comicshoplocator.com to find the one nearest you) or at the BOOM! Studios webstore. Digital copies can be purchased from content providers, including comiXology, iBooks, Google Play, and Kindle. For continuing news on the MOUSE GUARD series and more from BOOM! Studios, stay tuned to boom-studios.com and follow @boomstudios on Twitter.