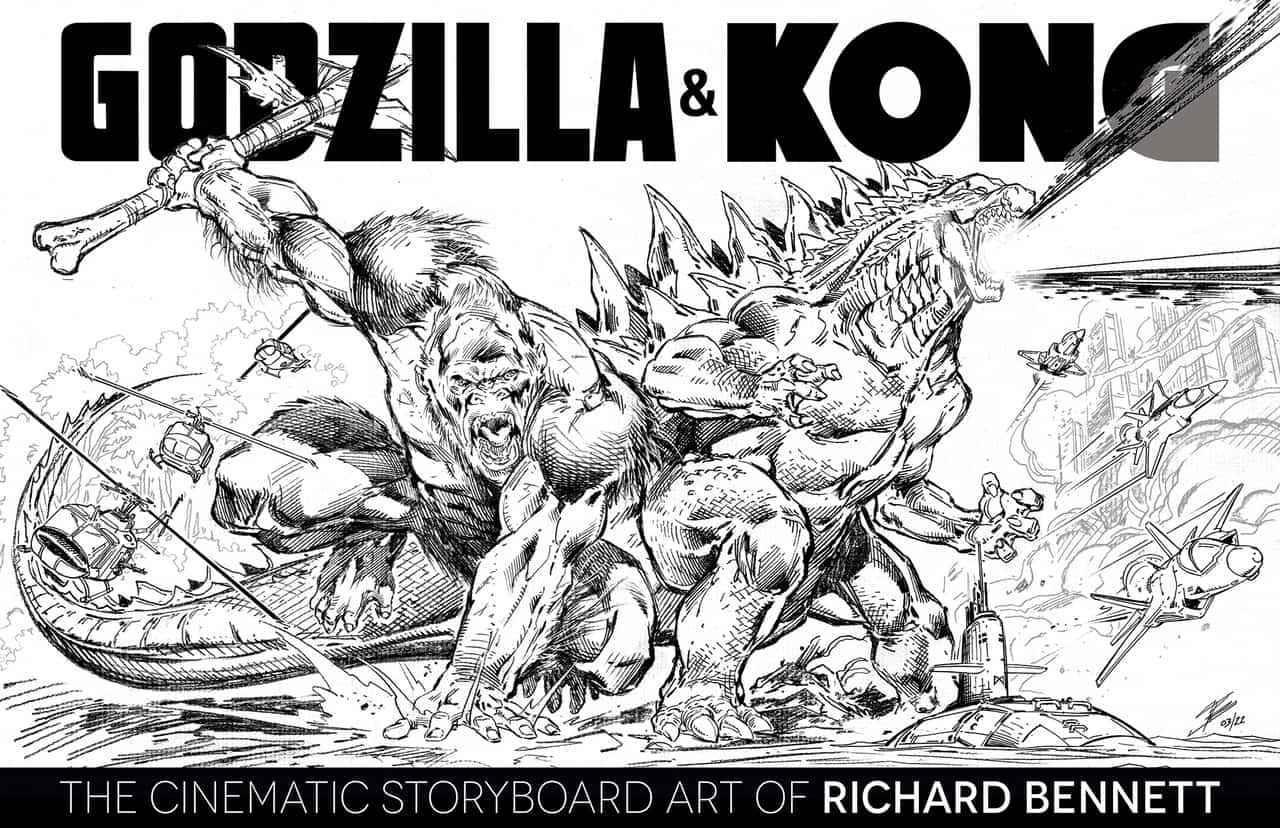 Richard Bennett is one of the most respected storyboard artists working today, having collaborated with directors David Fincher, Christopher Nolan, Brad Bird, and JJ Abrams, among others. Now, Bennett and Clover Press are launching a Kickstarter campaign for a stunning hardcover coffee table book which showcases Bennett’s storyboard storytelling and two of the biggest stars in the history of cinema with Godzilla & Kong: The Cinematic Storyboard Art of Richard Bennett. The stunning new book is the result of a licensing deal between Legendary Comics, Toho Co., Ltd., and Clover Press.

Godzilla & Kong: The Cinematic Storyboard Art of Richard Bennett features storyboard art from a selection of the best sequences from Warner Bros. Pictures and Legendary Pictures’ blockbuster trio of hits Godzilla vs. Kong, Godzilla: King of the Monsters, and Kong: Skull Island, along with some never-before-seen deleted scenes. Featuring full color stills reflecting the final shots in the film, the book is sure to be a must-have for movie buffs, film students, industry professionals and, of course, all Kaiju aficionados!

“This book is an opportunity to both spotlight the process of making a Hollywood blockbuster and the craft of storyboard storytelling,” said Bennett. “It will showcase lots of material displaying the early planning for each scene and will also give fans a chance to peek into some of the deleted scenes that never made it onto the big screen. I started out as a comic book artist, and fans of both comics and films will see how that experience informs my work.” Bennett has worked on over 60 major motion pictures, including Zodiac, The Curious Case of Benjamin Button, The Social Network, Star Trek, Mission: Impossible — Ghost Protocol, Avengers, Captain America: Winter Soldier, Captain America: Civil War, TRON: Legacy, Dunkirk, Tenet, and Spider-Man: No Way Home.

Presented in a deluxe 11.75” x 8.5” widescreen hardcover coffee table book with over 200 pages, Godzilla & Kong: The Cinematic Storyboard Art of Richard Bennett features an introduction by Godzilla vs. Kong director Adam Wingard and an afterword by Oscar-Nominated production designer Stefan Dechant, who writes, “Within these pages we find the imagination and artistry of Richard Bennett. He brings to life the Kaiju of cinema’s yesteryear through the modern retelling of Legendary’s Monsterverse.”