NEWS WATCH: HARKER: THE BLACK HOUND PART ONE Out This January from Time Bomb Comics

Harker: The Black Hound Part One out this January! The cult comic series starts its second storyline!

“Harker is a welcome reappearance of an accessible mature British comic series that knows not
just what it wants to pastiche but why it wants to do it.” ? Tripwire Magazine
Since coming to Time Bomb Comics in 2019, dark comedy crime series Harker has quickly become a
favourite of the British Indie comic scene. This new storyline is the second in the series and will be published January 2022, launching Time Bomb’s 15th anniversary year.
DCI Harker is enjoying a holiday in Whitby, and the last thing he wants is to be drawn into solving a murder. So when a famous novelist is killed right in front of him, he decides he’s a suspect and relaxes on the dodgems. DS Critchley, however, needs his help, especially when another body washesin with the tide. Who is the murderer, what does it have to do with this spooky old coastal town, and how does it involve the huge dog seen on the Moors?
Following on from the huge success of the previous story, Harker: The Book of Solomon, Time Bomb Comics and creators Vincent Danks (Gravestown, Doctor Who Magazine, Red Dwarf Magazine) and Roger Gibson (Torchwood, Gravestown, Mad Girl), and colourist Andrew Richmond (Gravestown, Dead by Dawn) are excited to bring this new chapter to fans. Like the previous Harker books, this graphic novel is part one of two: a full colour, sixty?eight page perfect bound volume of this thrilling crime series ? a unique homage to classic tv detective shows, filled with humour, wit, adventure and mystery.
DCI Harker is a homage to the classic tv detectives: he hasthe shabby dresssense of Columbo, drives a car Morse would love, has the grumpy demeanour of Gene Hunt from Ashes to Ashes, possesses the quirky oddness of Monk and displays the dazzling brilliance of Sherlock Holmes. He’s a classic hard?boiled English copper in his late fifties: moody, antisocial and almost incapable of functioning in the modern?day police force. DS Critchley, hisfaithful assistant, is hisfoil ? modern and smart with an eye for the girls, but equally strange and eccentric.

Time Bomb Comics chief, Steve Tanner spoke about what makes Harker such a unique series, and why he thinks the series resonates with readers in the UK and worldwide:
“Much of what makes Harker such a great read is because Gibson & Danks aren’t trying to reinvent the wheel or pander to perceived trends. Instead, they’re concentrating on telling brilliant crime stories, using the familiar detective tropes everyone has seen time after time on the TV screen to create a thoroughly engaging and entertaining comic. The tone of it, the style of it, the absolute sheer British?ness of it ? It’s a delight to be publishing it under the Time Bomb Comics banner!” Praise for Harker:
“A thoroughly enjoyable story, beautifully written and illustrated, this one for anyone who likes
detective fiction, and may yet get Aunt Doris into comics.”
? ComicScene, https://comicscene.org/2021/01/17/harker?the?book?of?solomon?review/
“It’s not damning with faint praise to say that we could see this series on a Sunday night on ITV, it
just hits those genre notes perfectly.”
? Alex Thomas, Pipedream Comics, https://pipedreamcomics.co.uk/review?harker?the?book?
of?solomon?books?1?and?2?time?bomb?comics/
“Harker’s a great detective thriller with intriguing story, wonderful art, cracking dialogue and
moments of laugh out loud comedy… an absolute triumph of a comic. The first book really does
have everything you could ever want in great genre writing.”
? Forbidden Planet International
Book Details:
68 Pages, Full Colour, Perfect Bound 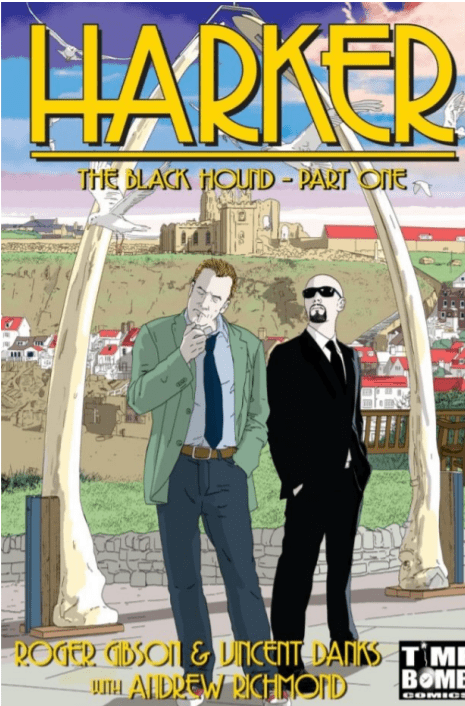 NEWS WATCH: HARKER: THE BLACK HOUND PART ONE Out This January from Time Bomb Comics