NEWS WATCH: Hawkeye: A “Do Not Miss” Trailer For Fans

The news of a Hawkeye trailer first hit social media the night before when Jeremy Renner, the actor that portrays Clint “Hawkeye” Barton in the series, posted in his Instagram stories that it would be dropped on September 13th. It appears that the actor did not mislead the fans since that is exactly what we got today.

I only recently became a fan of the Hawkeye characters (both Barton and Bishop) when I read a few of their comics about two years ago when I read that Clint, at one point in the comics, went deaf and had to use hearing aids and learn ASL. As someone with a hearing disability, this immediately intrigued me. So, of course, I dove right into the comics and immediately fell in love with the friendly, banter and jabbing, mentor/mentee relationship that Barton and Bishop had. So I personally had high expectations that they have to aim for (pun intended). So when the trailer dropped today, it was a bullseye (okay, I’m done with the cheap puns).

So let’s dive into what the trailer revealed to us and a working theory I have after watching it.

As a recent fan of the Barton/Bishop Hawkeye comics, I appreciate how this trailer focuses on the mentoring, bantering, brother/sister-like relationship that they have. It did a great job of capturing how Bishop first starts on her journey as someone who is a fan of Hawkeye from a young age and showed how much she looked up to him while quickly working alongside him and even putting him in his place in the car chase scene towards the end of the trailer (and yes, readers – we ARE getting the Tracksuit Mafia in this series!). As a Marvel and MCU fan, this is a great way to potentially pass on the baton and mantle of Hawkeye by having a fun series that gives the comic fans a cinematic experience of what they love while also letting those who are not well-versed in the storyline that this is going to be one hell of a ride.

Speaking of comics, the trailer is very reminiscent of the Hawkeye comic series. If you need a refresher or want to read up on the comics before the series comes out, check out Hawkeye (2012) series and All-New Hawkeye (2015) series. 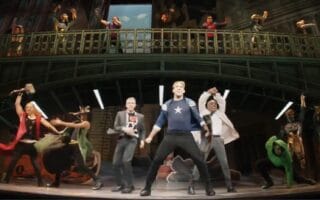 A feature that the trailer does not hide at all is the fact that we’re going to have an MCU where there is a Broadway musical about Steve Rogers. I am not sure why, but I do know that I want to see Disney give it the full Hamilton treatment some time and give the fans a chance to see the production on Disney+!

Right now, it doesn’t seem like it is pivotal to the storyline other than letting us know that Barton is in New York City, having dinner with his kids and going with them to watch the show (and yes, Hawkeye is a character in the musical, it appears!). But one thing we did notice from these establishing scenes is that Laura Barton is missing. Could this be a sign that the show opens with their marriage at a rocky start, or is it simply clever editing for more Marvel buzz? We’ll just have to wait and watch.

One of the most beloved characters from the Hawkeye comic series is Lucky, who is a dog that Clint saved from the Tracksuit Mafia then later goes with Kate Bishop to Los Angeles. This dog is already a hit with viewers, and you can bet that Disney will capitalize on this and make stuffed Lucky dogs to sell, just in time for Christmas (and let’s be honest – who’s not going to get one?). It is interesting in this picture that it doesn’t seem like Lucky has lost his eye (one of his signature features is wearing an eye patch). You can still clearly see an eye here, so maybe they decided not to have this dog lose its eye for this story. Either way, we’re getting Lucky!

Hawkeye and his hearing aid

As I mentioned before, I got into the Hawkeye series because Clint’s hearing loss was a way I could connect with my own disability. You can bet that I freaked out when I watched the trailer, and I saw that Clint would be wearing a hearing aid in this series! It’ll be interesting to see why he ends up wearing hearing aids in the show since we have not received any indication in the movies that he had hearing loss. Still, either way, I’m excited that Marvel has brought this into the show as a great way to have representation and potentially dialogue about this. (There is also another character that will bring this conversation into full view that I will get to in a minute).

That’s right – the trailer opens because Clint is pursuing someone dressed in his Ronin costume and (supposedly) tracking down criminals. Being haunted by his past, Clint is clearly out to stop this and make sure that this doesn’t catch up to him. When Clint confronts Ronin, we find out it is Kate donning his outfit.

Now, here is where I will start on my theory. Later in the trailer, we see Barton ask Kate, “Are you one of them?” to which Kate responds with a nod. It is not clear who he is referring to here, but…

We do get our first glimpse of Maya “Echo” Lopez in the series. If you are unfamiliar with this character, she is a superhero from the comics who is of Cheyenne descent and is also deaf (which is another reason I am excited about this show). Her powers are that she is a skilled fighter and weapons expert and has great photographic reflexes where she can mimic people’s actions and fighting styles (similar to Taskmaster). What some of us may not know is that Echo was actually the first Ronin in the comics. And in this trailer, she doesn’t seem too happy. So taking it back to full circle, when Clint asked Kate if she was one of them, my theory is that we may see a group of vigilante/criminals who call themselves Ronin and that Kate was recruited by Echo, who may either be the leader or one of the top fighters in the group. Although we do know we have the Tracksuit Mafia, it wouldn’t be surprising to see a second, more powerful antagonist in the show.

Back to the Daredevil theories…

One other thing about Echo and the comics: in her origin story, her father was killed by Kingpin, and then he raised her as her adoptive father (twisted, yes, but it’s Kingpin). And we heard rumors about Vincent D’Onofrio being in an episode of Hawkeye, reprising his role as Kingpin. Knowing the character history of Echo and the fact that this series is going to take place in New York City, this is possible, especially with all of the rumors surrounding Spider-Man No Way Home having Charlie Cox reprising his role as Matt Murdock/Daredevil. But let’s not forget that Marvel has a well-documented history of misleading people as well:

and so on. But if this truly is a ruse, then it seems like they went out of their way to throw us off in a way that doesn’t have many dividends in the end.

Coming off the heels of the newly released Spider-Man trailer and Shang-Chi released, Hawkeye has just got the Marvel fandom buzzing again for a show that has the most potential to be a big, surprising success. So far, Marvel doesn’t seem to be slowing down with these successes this year.

Hawkeye: A “Do Not Miss” Trailer For Fans!