BOOM! Studios revealed a first look at HOUSE OF SLAUGHTER #8, the next issue in the new ongoing original series set in the world of the Eisner Award-winning Something is Killing the Children, written by Something is Killing the Children co-creator James Tynion IV (The Department of Truth, The Nice House on the Lake) and co-writer Sam Johns (Punchline, The Joker), with art by rising star artist Letizia Cadonici and co-creator Werther Dell’Edera (Razorblades), colorist Francesco Segala (Firefly), and letterer AndWorld Design (The Many Deaths of Laila Starr), the continuation of the story about a Scarlet Mask who steps up to a terrifying task, available in August 2022.

The SCARLET arc of House of Slaughter continues as Edwin’s search for a legendary monster goes horribly amiss. Adrift on Lake Michigan, can Edwin survive with only the torn pages of his journal as makeshift S.O.S. notes? And what memories of his past cases will surface as he clings to life?

Fans can also collect a special Bodybag variant cover by renowned artist Chris Burnham (Batman: Urban Legends) with colors by Miquel Muerto that will be polybagged and not publicly previewed. Each Bodybag variant cover will be limited to its initial print run and will not be reprinted or collected in any subsequent formats.

Something is Killing the Children is the bestselling, Eisner Award-winning hit series created by acclaimed comics writer James Tynion IV and illustrator Werther Dell’Edera. It has sold over one million copies worldwide, has been nominated for Eisner, Harvey, and Ringo Awards, and garnered widespread critical acclaim. Readers and fans can find the first four volumes collecting the first fifteen issues of the ongoing series in bookstores everywhere.

HOUSE OF SLAUGHTER is the newest release from BOOM! Studios’ eponymous imprint, home to critically acclaimed original series, including BRZRKR by Keanu Reeves, Matt Kindt, and Ron Garney; Something is Killing the Children by James Tynion IV and Werther Dell’Edera; We Only Find Them When They’re Dead by Al Ewing and Simone Di Meo; Once & Future by Kieron Gillen and Dan Mora; Basilisk by Cullen Bunn and Jonas Scharf, Grim by Stephanie Phillips and Flaviano and the ; and the upcoming series Briar by Christopher Cantwell and Germán García; Stuff of Nightmares by R.L. Stine and A,L. Kaplan; The Approach by Jeremy Haun, Jason A. Hurley, and Jesus Hervas; Damn Them All by Simon Spurrier and Charlie Adlard; Behold, Behemoth by Si Spurrier and Charlie Adlard; Specs by David Booher and Chris Shehan; and Once Upon a Time at the End of the World by Jason Aaron, Alexandre Tefenkgi, Leila del Duca, and Nick Dragotta. The imprint also publishes popular licensed properties, including Dune: Waters of Kanly from Brian Herbert, Kevin J. Anderson, and Francesco Mortarino; Mighty Morphin and Power Rangers from Ryan Parrott, Marco Renna, and Francesco Mortarino; and Magic from Jed McKay and Ig Guara. 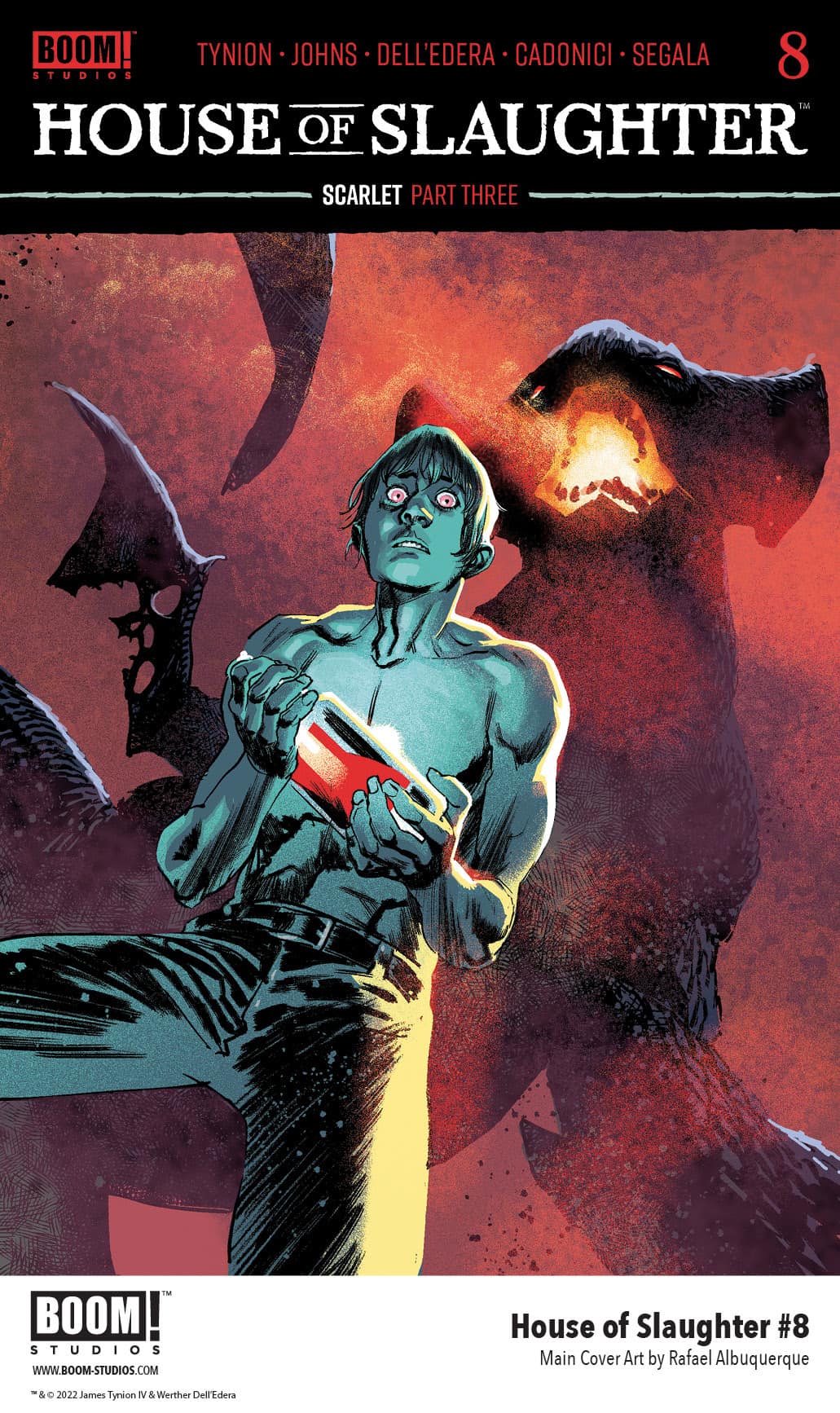 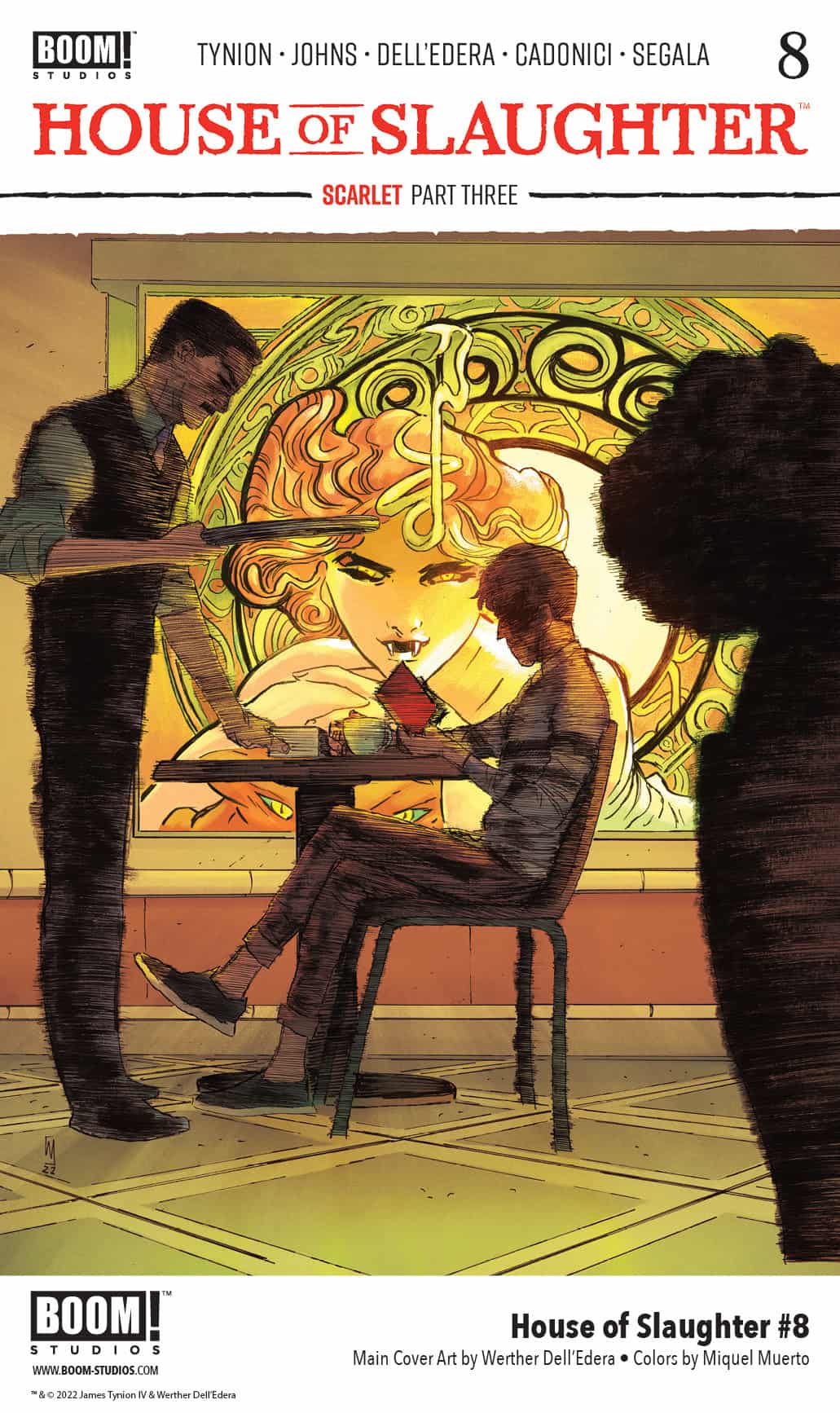 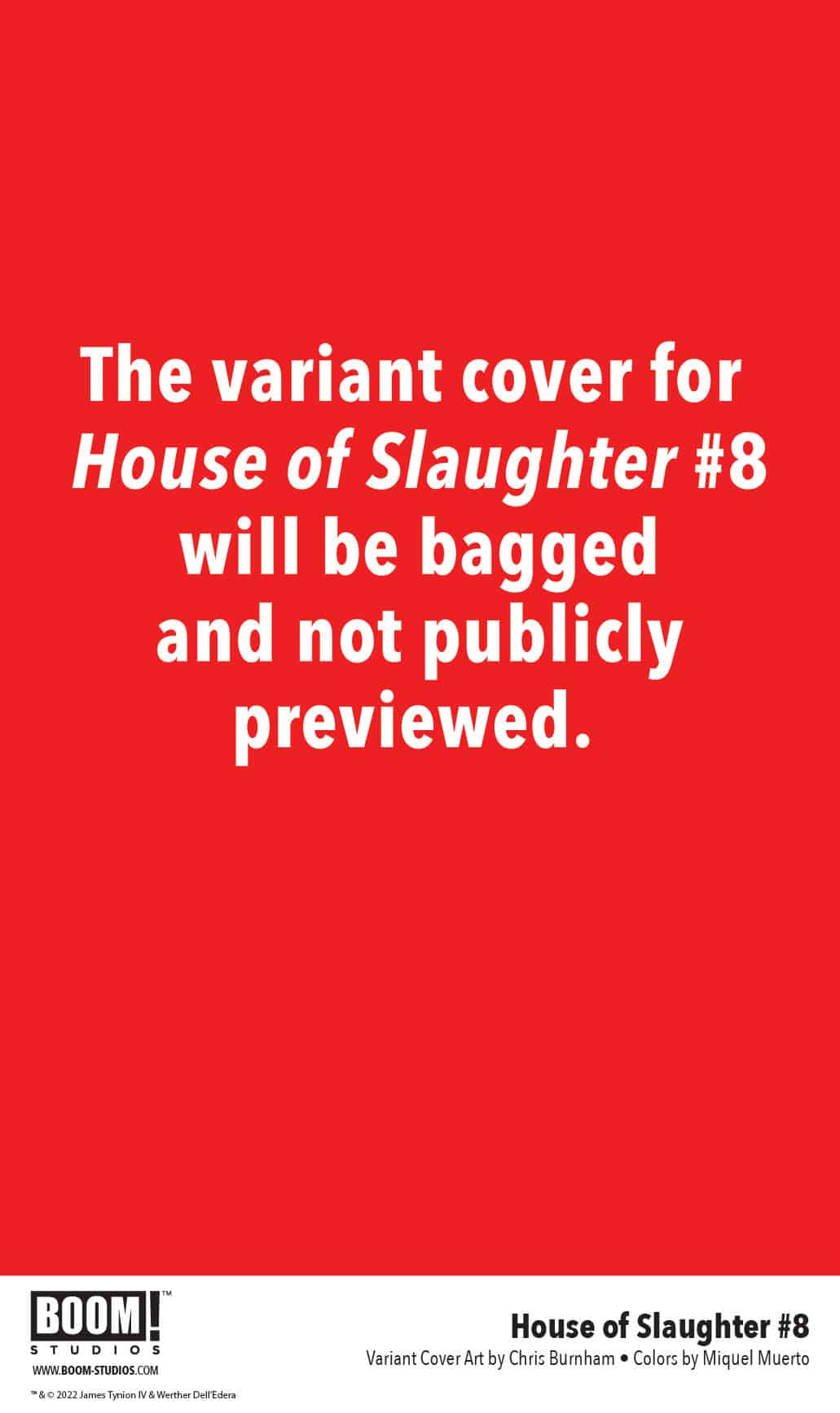 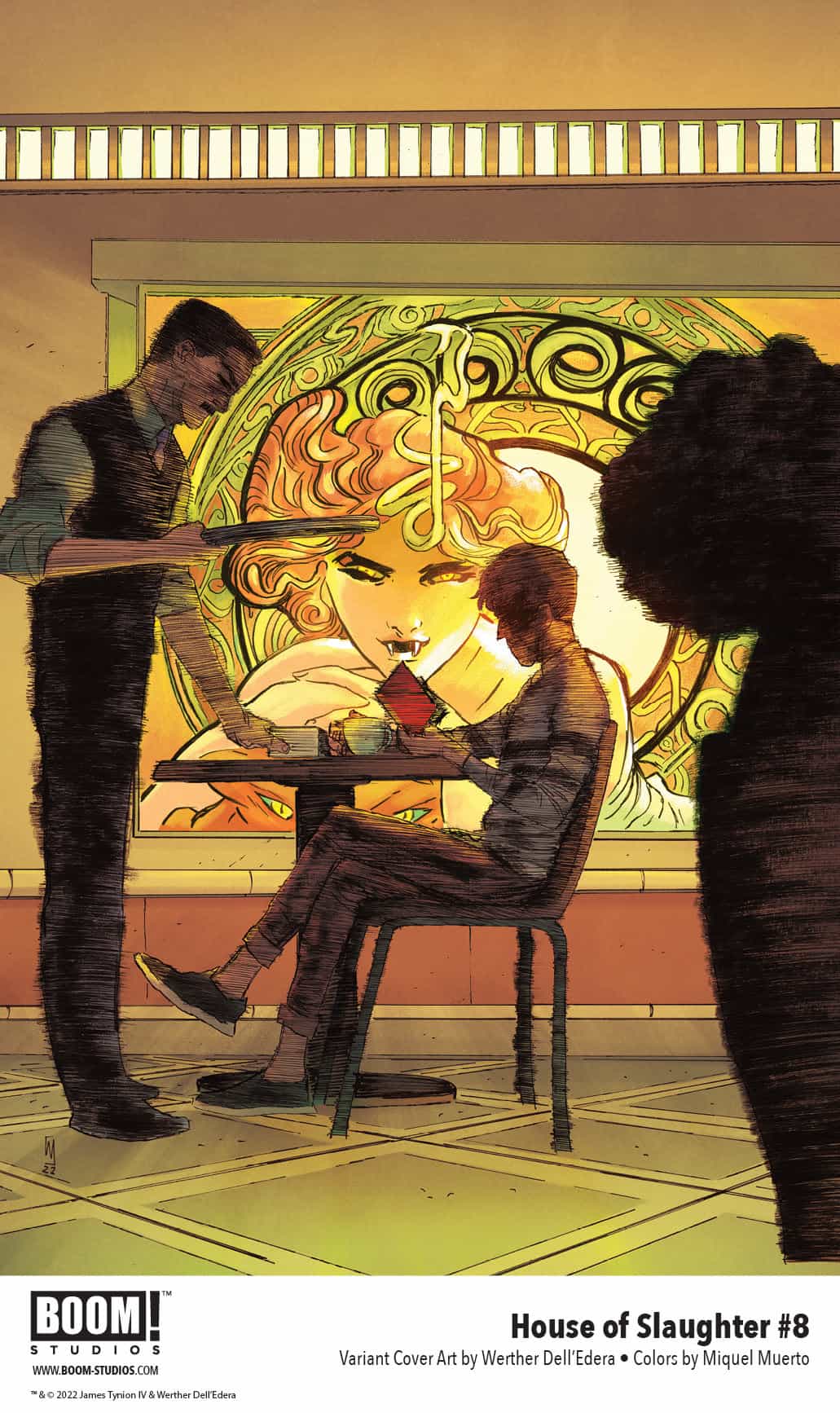 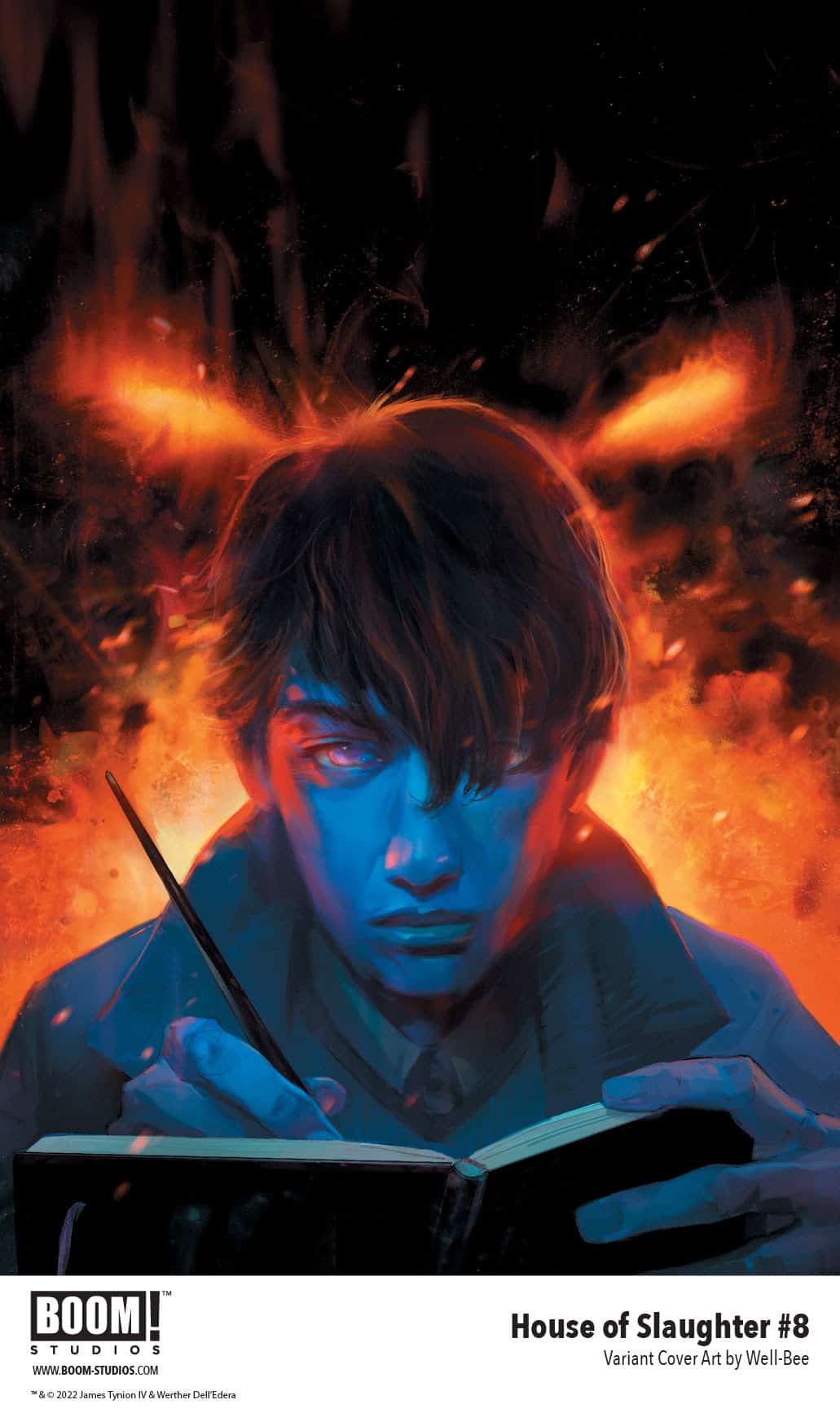 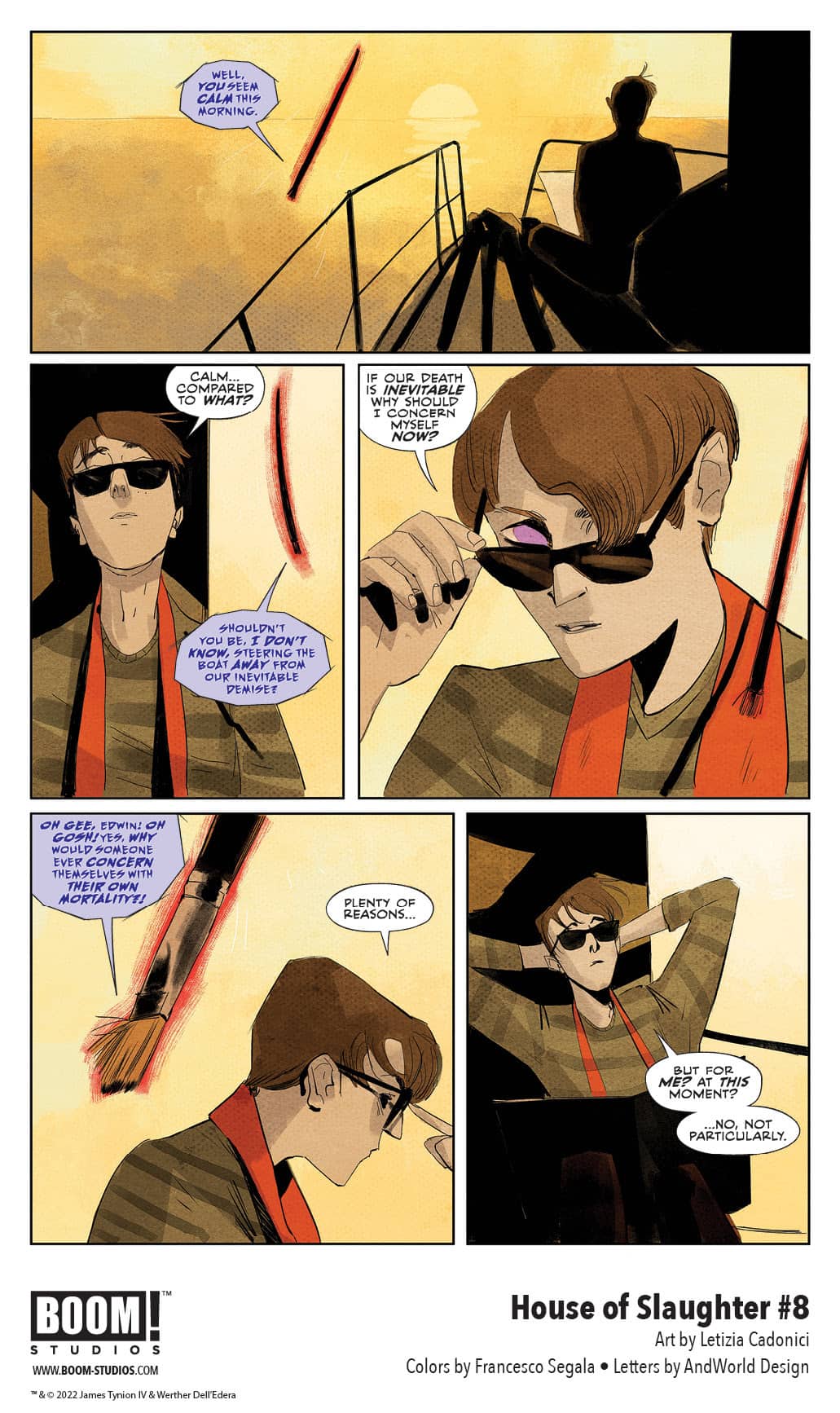 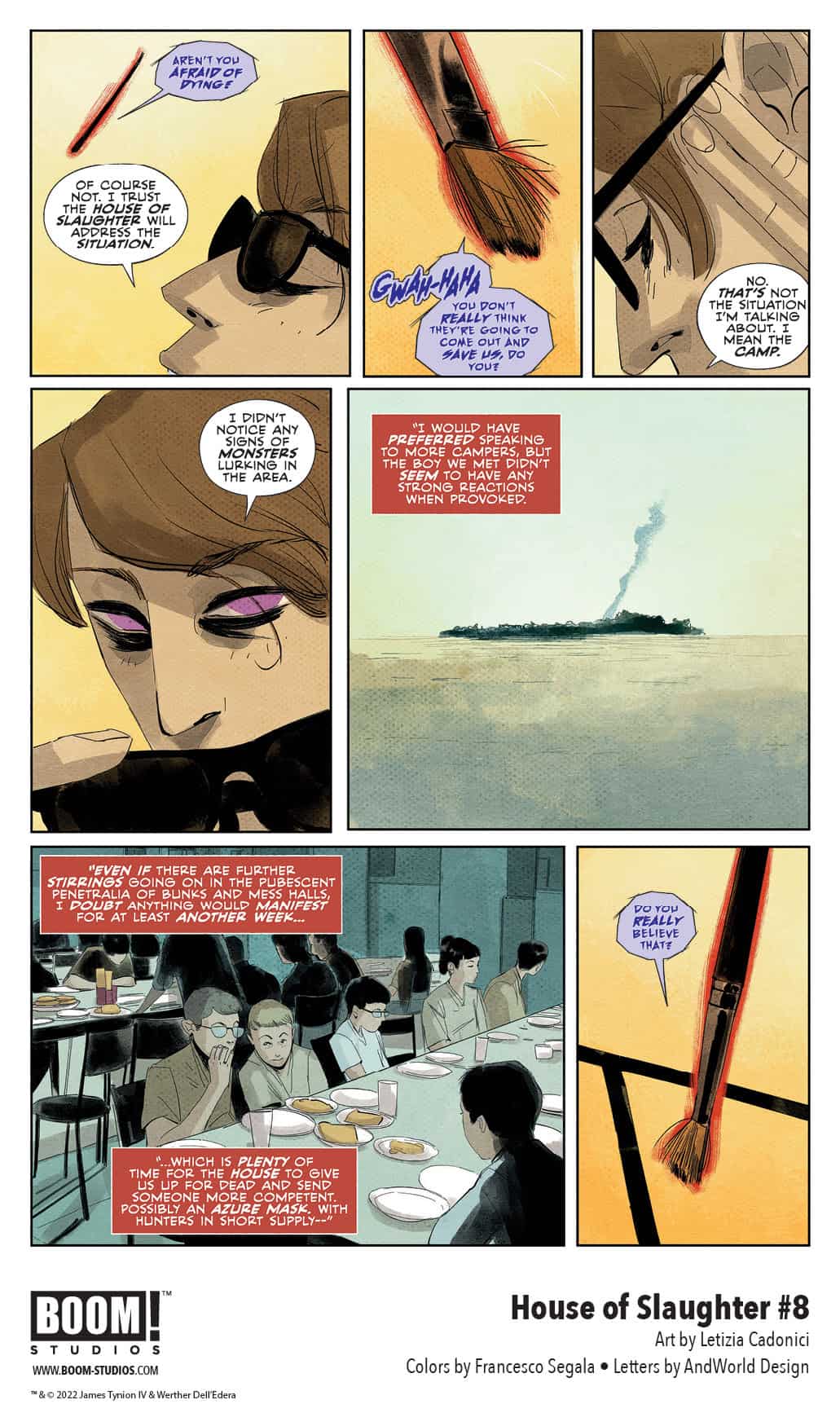 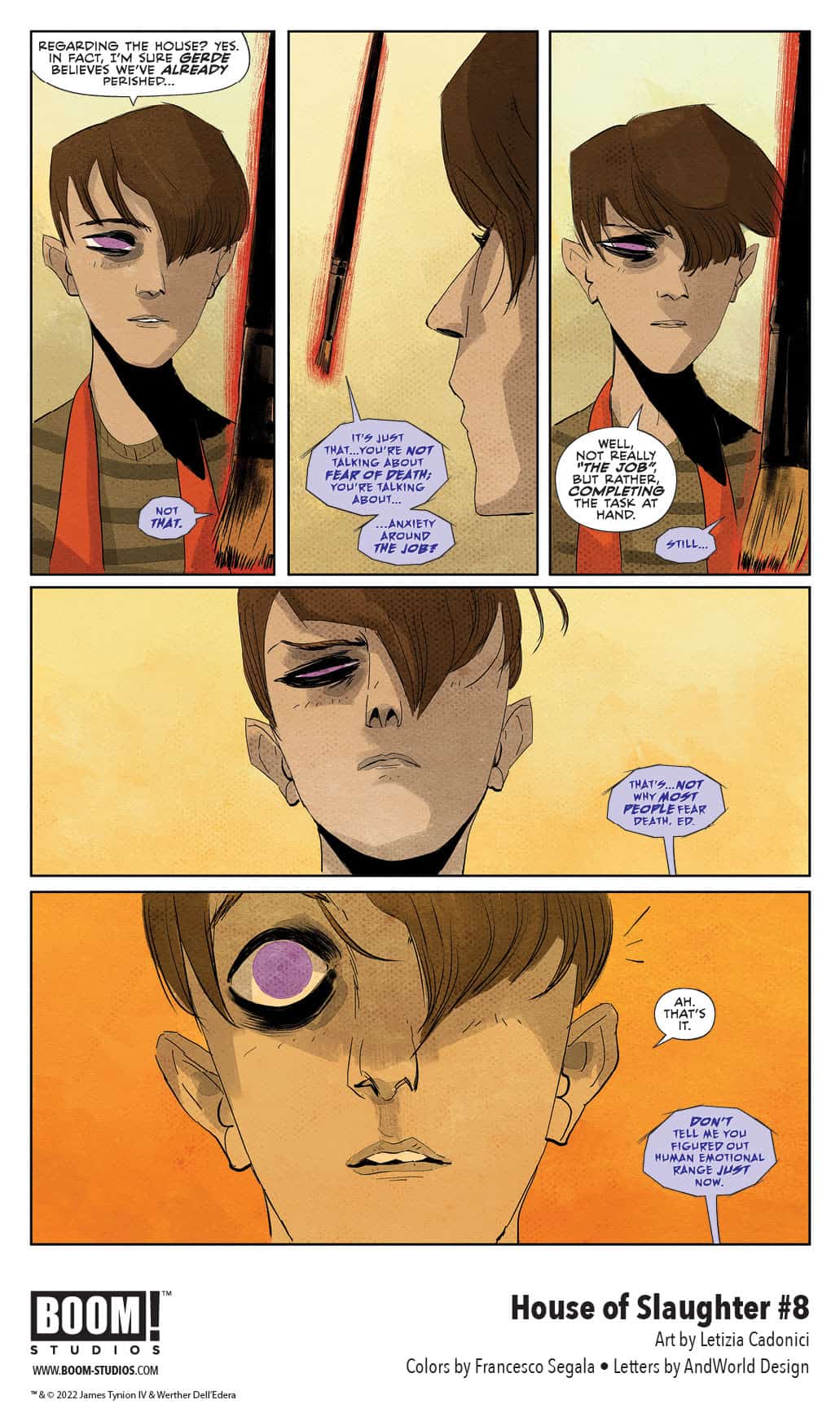 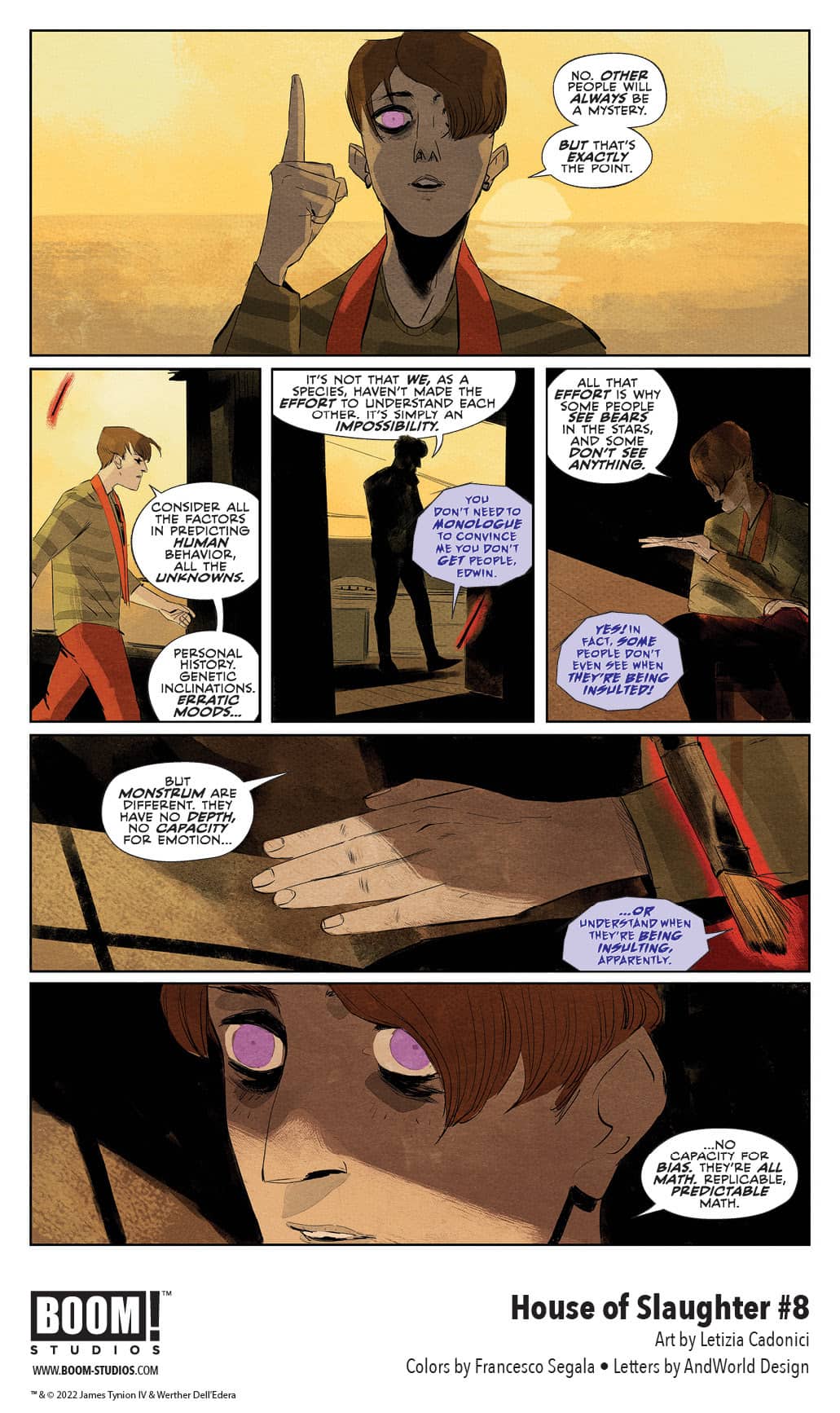 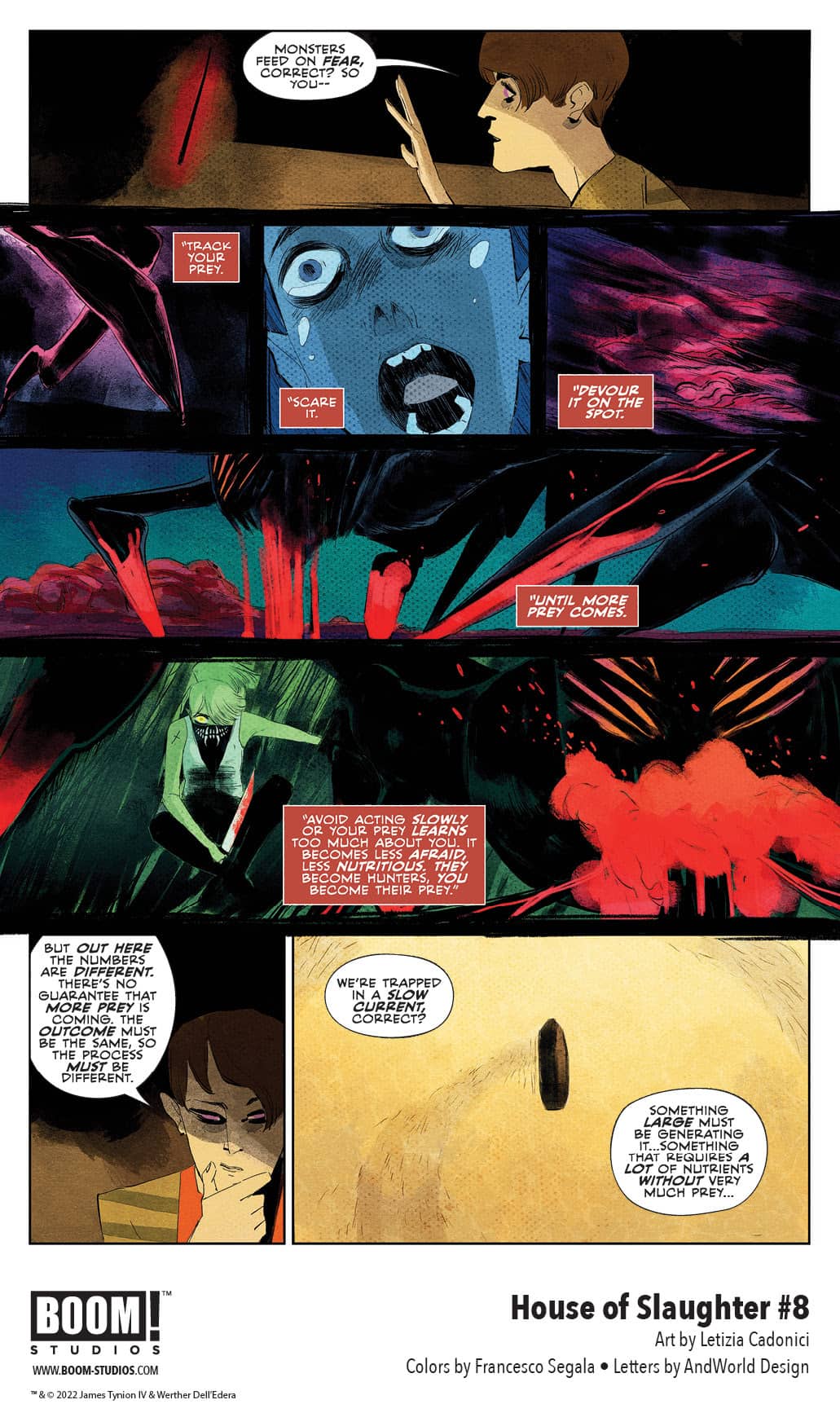 Print copies of HOUSE OF SLAUGHTER #8 will be available for sale on August 31, 2022 exclusively at local comic book shops (use comicshoplocator.com to find the nearest one) or at the BOOM! Studios webstore. Digital copies can be purchased from content providers, including comiXology, iBooks, Google Play, and Kindle. Readers can purchase HOUSE OF SLAUGHTER VOL 1, collecting the first five issues, wherever books are sold.

For continuing news on SOMETHING IS KILLING THE CHILDREN and more from BOOM! Studios, stay tuned to boom-studios.com and follow @boomstudios on Twitter.