Image/Skybound has announced that they have formed a new original graphic novel imprint, Skybound Comet, aimed at Young Adult (ages 12+) and Middle Grade (ages 8-12) audiences, set to launch next year.

Skybound Comet officially takes flight in July 2022 with Clementine Book One, beginning a trilogy set in the world of Robert Kirkman’s The Walking Dead, from award-winning writer/artist Tillie Walden (Spinning, On A Sunbeam). This will be followed by original graphic novel Everyday Hero Machine Boy from rising star voices Tri Vuong and Irma Kniivila in September 2022, and then Sea Serpent’s Heir Book One, kicking off a fantasy trilogy from acclaimed creators Mairghread Scott (Star Wars: Resistance, Guardians of the Galaxy) and Pablo Tunica ?(TMNT Universe), in October 2022.

“The goal of Skybound has always been to create the best comics that bring new readers to the medium we love so much, and Skybound Comet is the next step in that mission. We’ll be not only exploring pop culture phenomenon like The Walking Dead from a whole new perspective, but also bringing you entirely new worlds and new characters that we know will capture the hearts of readers of all ages.”

“These three launches are only the beginning of our long-term graphic novel plan,” said  “We’re committed to igniting the imaginations of young people with exciting new genre adventures from diverse storytellers for many years to come.”

To kickoff the imprint, Clementine Book One, featuring Clementine, the star of the bestselling video game franchise TELLTALE’S THE WALKING DEAD, is back on the road, looking to put her traumatic past behind her and forge new path all her own. But when she comes across an Amish teenager named Amos with his head in the clouds, the unlikely pair journeys North to an abandoned ski resort in Vermont, where they meet up with a small group of teenagers attempting to build a new, walker-free settlement. As friendship, rivalry, and romance begin to blossom amongst the group, the harsh winter soon reveals that the biggest threat to their survival…might be each other.

Tillie Walden, the Eisner Award-Winning Author of On A Sunbeam, will be taking Clementine or her new journey:

“Starting out with a character like Clementine is both a huge responsibility and joy. Clementine is a person who brings adventure with her everywhere she goes, and the more I thought about it, the more I wanted to take her beyond the world of the games, to somewhere new and thrilling (like the top of a mountain!). She is a force and drawing and writing her story has been one of the best experiences in my cartooning life.”

Clementine makes her first comic book appearance in Skybound X #1, available in comic shops and at digital providers on July 7, 2021. 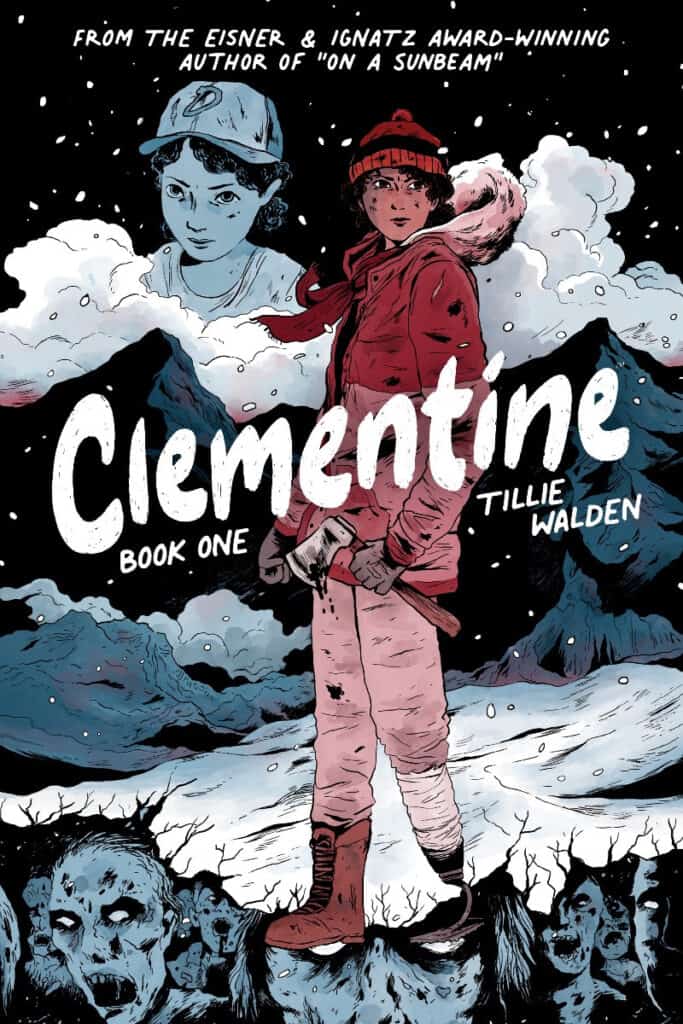 The second title from the new imprint is Everyday Hero Machine Boy, the titular hero falls from the sky to the domed city of Mega 416, leaving a wake of destruction in his path…until Karate Grandpa is able to turn on his heart. Now, Machine Boy wants nothing more than to become a hero! Whether he is fighting giant bugs in the school’s basement, rescuing cats from trees, or making the perfect spaghetti sauce, Machine Boy is always looking for the best way to help others. But when his heart begins to interact dangerously with other debris from space, Machine Boy wonders if he can be a power for good after all.

Tri Vuong, the artist, explained the series as the following:

“Machine Boy was initially inspired by ’80s anime, 16-bit video games, and kung fu movies but as Irma and I delved deeper into his world, we found ourselves telling a story about the pain and joys of growing up. Hopefully it touches on those collective childhood memories and experiences that we all seem to share.”

“The world of Everyday Hero Machine Boy kept getting more ludicrous as we worked on the story, but somehow more real. I wanted to live in Mega416 and could relate to the characters, even though that character might be a chicken jock. We had a lot of big feelings while working on this story, and hope that it inspires big feelings too!” 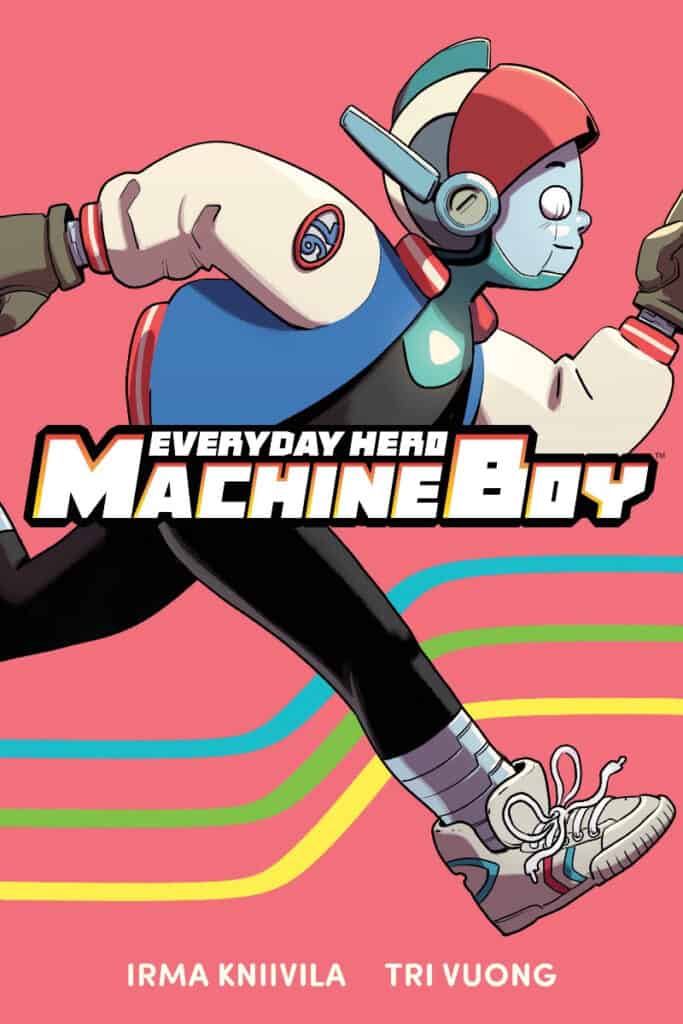 The end of the world is coming in Sea Serpent’s Heir Book One as a teen named Aella on Kinamen Isle spends her days fishing and minding her aunts, dreaming of life beyond the horizon. Everything changes, however, when she awakens an ancient evil within herself as it’s revealed that she’s the reincarnation of Xir, the serpent that almost destroyed the world. Worse yet, a fanatical religious organization has arrived on Kinamen Isle in search of Xir.

Mairghread Scott had this to say:

“In this strange world, with its stormy nights, tropical islands and ruthless magical pirates, I see echoes of the darkest Jim Henson or Arthur Rackham but I also see the mystery of the first kisses and the tenderness of mythological beasts. And if I mention the horror of the dark and the curiosity about magic, it is because that is precisely the feeling of growing up.”

Aella makes her first comic book appearance in Skybound X #4, available in comic shops and at digital providers on July 28, 2021. 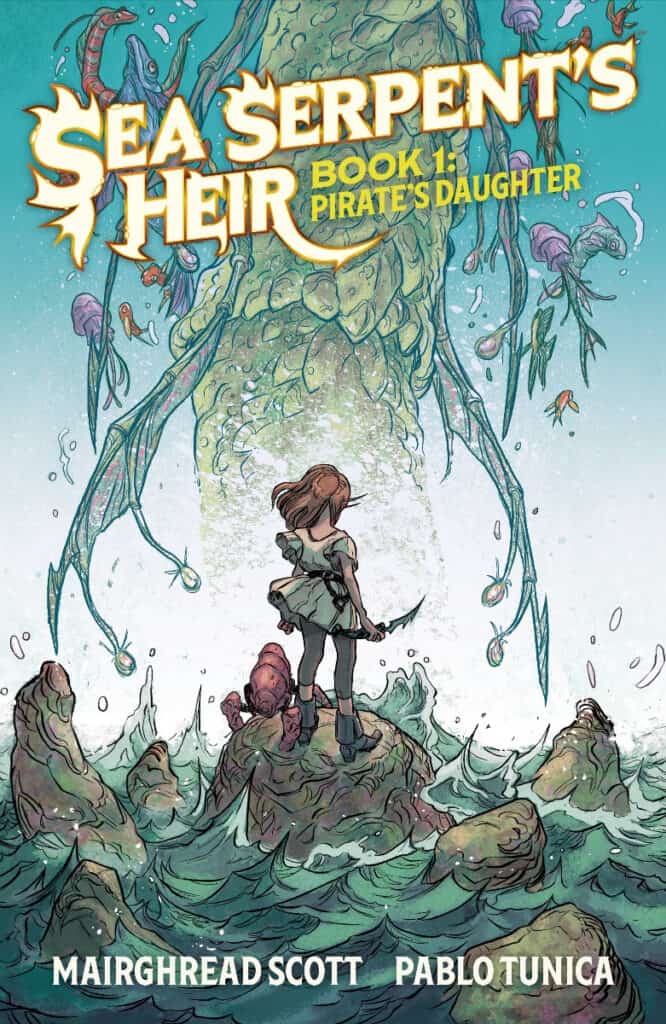 All Skybound Comet releases will be available at ?comic book shops, bookstores and digital platforms including Amazon Kindle, Apple Books, comiXology, and Google Play in 2022.