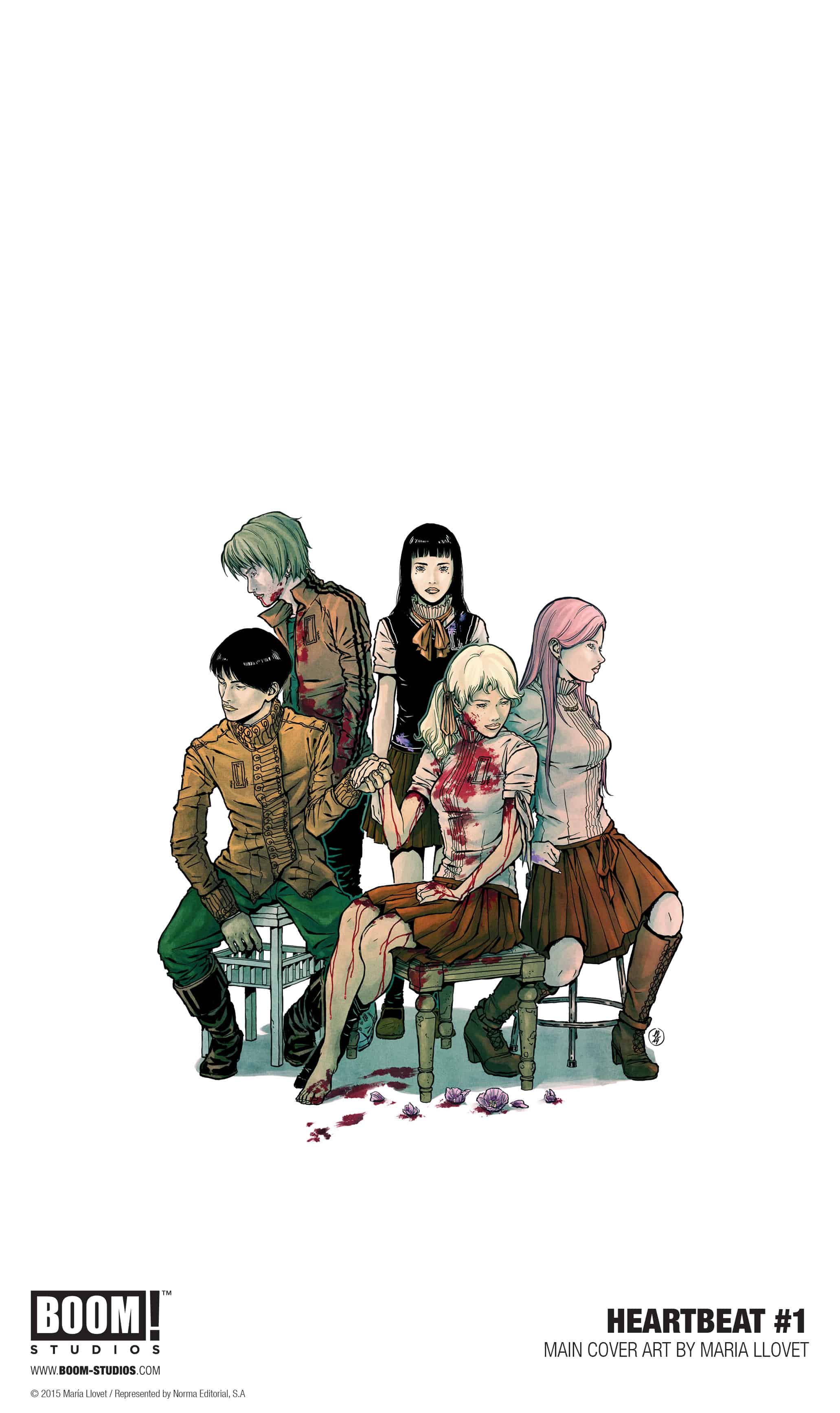 Eva, a high school outcast, finds herself witness to a horrible secret: the most popular boy in school enjoys the taste of blood and will kill to get his hands on it. Horrified and intrigued, Eva lets herself be pulled into Donatien’s macabre world. He offers the escape she has been looking for…but how much is Eva willing to betray her moral code in order to find something that gives her life meaning? And will she—or Donatien—ever find redemption?

Maria Llovet is a multidisciplinary artist from Barcelona, who has published several graphic novels, including There’s Nothing There and Loud. Llovet is currently the artist on Brian Azzarello’s series Faithless from BOOM! Studios. Her illustrations have been characterized by cinematic influences in its visual narrative, with sex and death as central themes permeating her work.

“The idea for HEARTBEAT came from seeing the Japanese movie Kokuhaku(Confessions). In this movie, they mentioned a pair of girls that were fans of a psycho-killer, and the concept made me think, what if my main character was to see the person she liked doing something terrible, what would happen? Which values would be put above others?” said cartoonist Maria Llovet. “HEARTBEAT was also a point of inflection in my career. After I finished it, I reconsidered absolutely everything about my art so I’m very excited that HEARTBEAT is going to be published by BOOM! Studios and will be able to reach so many new readers!”

HEARTBEAT is the newest release from BOOM! Studios’ eponymous imprint, home to critically acclaimed original series, including Once & Future by Kieron Gillen and Dan Mora; Something is Killing the Children by James Tynion IV and Werther Dell’Edera;Faithless by Brian Azzarello and Maria Llovet; Abbott by Saladin Ahmed and Sami Kivelä;Bury The Lede by Gaby Dunn and Claire Roe; Klaus by Grant Morrison and Dan Mora; and Folklords by Matt Kindt and Matt Smith. The imprint also publishes popular licensed properties including Joss Whedon’s Firefly from Greg Pak and Dan McDaid; Buffy The Vampire Slayer from Jordie Bellaire and David López; Angel from Bryan Edward Hill and Gleb Melnikov; and Mighty Morphin Power Rangers from Ryan Parrott and Daniele Di Nicuolo.

“This series lives in the space between dark secrets and longing desires, and is absolutely addictive with each page turn, as we wonder just how deep Eva will be pulled in,” said Amanda LaFranco, Editor, BOOM! Studios. “Maria has entranced readers with her stunning and sensuous illustrations in Faithless, and she continues to impress in HEARTBEAT, with the characters, designs, and a twisted original story of her own.”

Print copies of HEARTBEAT #1 will be available for sale November 20, 2019 exclusively at local comic book shops (use comicshoplocator.com to find the nearest one) or at the BOOM! Studios webstore. Digital copies can be purchased from content providers, including comiXology, iBooks, Google Play, and the BOOM! Studios app.