NEWS WATCH: Jason Aaron Debuts ONCE UPON A TIME AT THE END OF THE WORLD with BOOM! Studios! 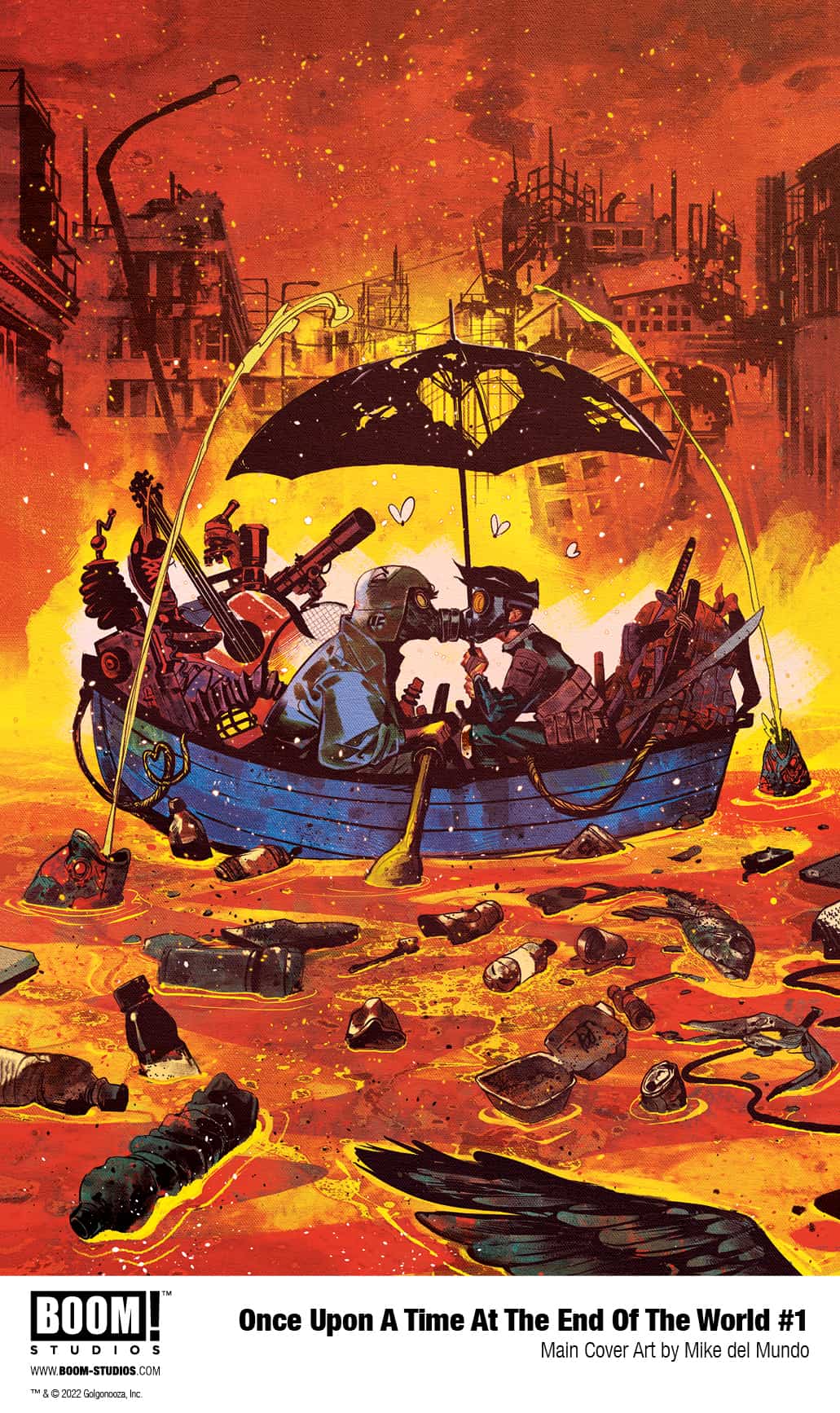 LOS ANGELES, CA –  BOOM! Studios announced today an epic post-apocalyptic series from New York Times bestselling and Eisner and Harvey Award winner, writer Jason Aaron (Thor, The Avengers, Southern Bastards) who launches his most ambitious creator-owned series to date with three unique artistic teams to take on a vision of the end of the world that’s brutal and nostalgic, whimsical and grounded… and ultimately, timeless.

Maceo and Mezzy have never met anyone like each other, and they’ll need all the help they can get to survive a planet ravaged by environmental catastrophe.  This epic trilogy–each issue overflowing with 30 story pages–spans a lifetime as the dark mysteries of a ruined world and their own stark differences tear at the threads holding Maceo and Mezzy together.. Will they, and the earth beneath their feet, ultimately be torn apart?

Jason Aaron is an award-winning comic book writer best known for his work with Marvel Comics, including a landmark seven-year run on Thor that introduced Jane Foster as the hammer-wielding Mighty Thor. He’s also had celebrated stints writing Wolverine, Doctor Strange, Ghost Rider, Conan, and the 2015 Marvel relaunch of Star Wars that was the best-selling American comic book in more than 20 years. Aaron is the current writer on Marvel’s flagship Avengers book and its spinoff, Avengers Forever, along with a brand-new, character-defining Punisher series. His critically acclaimed creator-owned work includes the Eisner and Harvey Award-winning Southern Bastards from Image Comics and the New York Times best-selling crime series Scalped from Vertigo Comics. Aaron was born and raised in Alabama and currently resides in Kansas City.

“A love story should be more than just one kind of story. More than just a first act. Especially when it’s the kind of epic, unbridled love that carves a trail across two lifetimes, leaving behind moments of joy and suffering, pleasure and horror, healing and scarring. Even more so when those lives are being lived in a post-apocalyptic wasteland,” said Aaron. “This is the story of two lost kids who find each other at the very end of days. Like if Wes Anderson had directed ‘Road Warrior.’ But that’s only the beginning of their journey of survival and of the world’s last great love story.”

ONCE UPON A TIME AT THE END OF THE WORLD #1 features main cover art by highly acclaimed illustrator Mike Del Mundo (Thor), and variant cover art by famed artists Alexandre Tefenkgi (The Good Asian), Junggeun Yoon (Something is Killing the Children), Jenny Frison (Wonder Woman), and more.

“Jason and three uniquely distinct and original artists weave a story that feels close to home—whether it takes you back to your own childhood and the unjaded attempts at first love, first great heartbreak, or first steps into the unknown—ONCE UPON A TIME AT THE END OF THE WORLD hits a nerve, reminds you of a forgotten time, and sweeps you up into the lives of this unlikely duo navigating a dying world,” said Sierra Hahn, Executive Editor, BOOM! Studios. “Each artist will weave in and out of each other’s respective chapters taking readers on a journey forward and back in time. It’s a comic reading experience that you won’t want to miss.”

ONCE UPON A TIME AT THE END OF THE WORLD is the newest release from BOOM! Studios’ eponymous imprint, home to critically acclaimed original series, including BRZRKR by Keanu Reeves, Matt Kindt, and Ron Garney; Something is Killing the Children by James Tynion IV and Werther Dell’Edera; Once & Future by Kieron Gillen and Dan Mora; We Only Find Them When They’re Dead by Al Ewing and Simone Di Meo; Seven Secrets by Tom Taylor and Daniele Di Nicuolo; The Many Deaths of Laila Starr by Ram V and Filipe Andrade; Basilisk by Cullen Bunn and Jonas Scharf; Grim by Stephanie Phillips and Flaviano; and the upcoming series Briar by Christopher Cantwell and Germán García, Stuff of Nightmares by R.L. Stine and A,L. Kaplan, The Approach by Jeremy Haun, Jason A. Hurley, and Jesus Hervas; and Damn Them All by Simon Spurrier and Charlie Adlard. The imprint also publishes popular licensed properties, including Dune: House Atreides from Brian Herbert, Kevin J. Anderson, and Dev Pramanik; Mighty Morphin and Power Rangers from Ryan Parrott, Mat Groom, Moises Hidalgo, and Marco Renna; and Magic from Jed McKay and Ig Guara.

Print copies of ONCE UPON A TIME AT THE END OF THE WORLD #1 will be available for sale in November 2022 exclusively at local comic book shops (use comicshoplocator.com to find the nearest one) or at the BOOM! Studios webstore. Digital copies can be purchased from content providers, including comiXology, iBooks, Google Play, and Kindle.

For continuing news on ONCE UPON A TIME AT THE END OF THE WORLD and more from BOOM! Studios, stay tuned to boom-studios.com and follow @boomstudios on Twitter.

NEWS WATCH: Jason Aaron Debuts ONCE UPON A TIME AT THE END OF THE WORLD with BOOM! Studios!