DESTINY OF X, the next era of X-Men storytelling launches the Second Age of Krakoa as new titles emerge and existing ones undergo exciting status quo changes as the endless possibilities that await mutantkind are explored! And today, fans can learn more about one of March 2022’s launches–Kieron Gillen and Lucas Werneck’s IMMORTAL X-MEN!

IMMORTAL X-MEN will focus on the current leaders of mutantkind known as The Quiet Council in an X-Men series ripe with backstabbing, shady alliances, and chilling revelations that will put everything you thought you knew about Krakoa’s future into question! Already proven to be a master of the mutant mythos on books like UNCANNY X-MEN and GENERATION HOPE, Gillen makes his grand return to the franchise with an ambitious series unlike anything that’s come before in X-Men history. And fresh off his work on TRIAL OF MAGNETO, Lucas Werneck is ready to use his acclaimed talents to bring all the high-stakes action, heated clashes, and intense DRAMA to life in this first-of-its-kind X-Men title.

The Quiet Council rules the Krakoan age, for better… or worse. Now, shaken by INFERNO and X LIVES / X DEATHS OF WOLVERINE, they strive to hold together—no matter how much they want to tear each other apart. Take a seat in the room where it happens. “It” being “the most powerful people on Earth deciding the fate of the whole planet.” Prepare for sinister secrets to be revealed and learn that some secrets are more sinister than others…

Here’s what Gillen had to say about the new series in a Marvel press release:

“So, the match is lit, and IMMORTAL X-MEN is a book about the burning. To speak in a Hickmanian idiom, this is the New Avengers to Gerry’s Avengers. This is the book about Krakoa, and the Quiet council, with all its muffled screams. It’s about a group of people, some of whom are convinced they’re in the West Wing, some who have designs to be in House of Cards and at least one who knows they’re in Veep. It’s big ideas, politics, fights and fashion, lies, creation and destruction, all told across the widest possible canvas, in time and space. It’s some characters I’ve written before, with the volume turned up. It’s me falling in love with some characters I’ve never touched. It’s me somehow talking Marvel into paying me for having this much fun.

“Returning to the Inferno nod, Lucas Werneck is basically fire on the page. He’s someone who absolutely nails the tone of the book. When we do quiet and real, the characters have so much charisma it feels like stars are on the page. When we do big and impossible, he makes it real, and takes your breath away. Mark Brooks on covers is another treat. His gifts in creating form and charisma are obvious, but he’s throwing ideas at the page with a huge velocity. People are going to be poring over his first cover like it’s a piece of art at the heart of a conspiracy, as if every line means something. Which is lucky, because it does.” 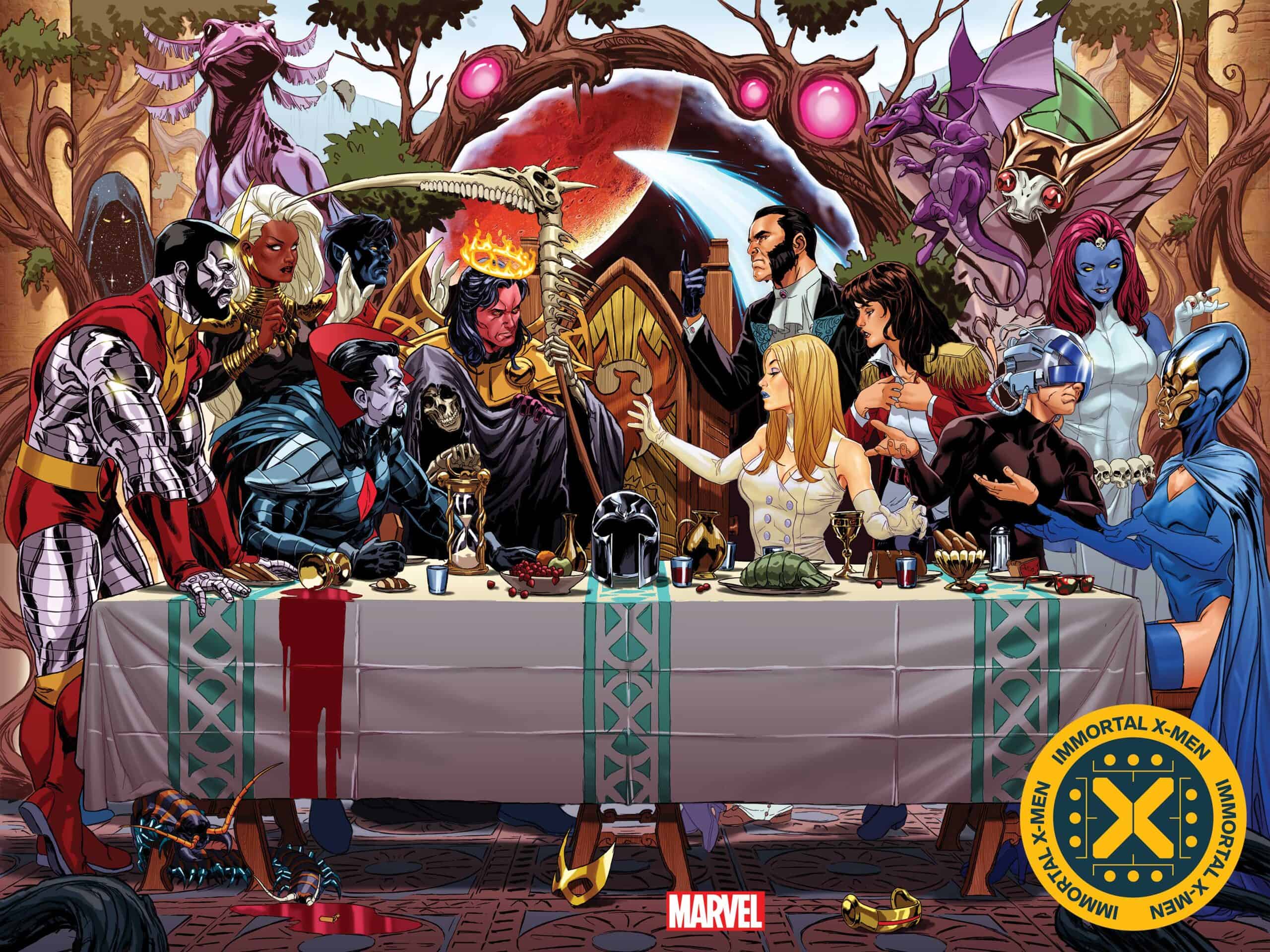 Professor X. Emma Frost. Destiny. Mystique. Storm. Nightcrawler. Kate Pryde. Colossus. Sebastian Shaw. Exodus. Mister Sinister. Each of them has their own vision for Krakoa and they’re willing to do whatever it takes to achieve it. Will mutantkind survive the experience? Find out when IMMORTAL X-MEN #1 hits stands on March 30. For more information, visit Marvel.com.