Of course on the day Kelly Castleton decides to be spontaneous on ONE LITTLE THING, she stumbles upon ancient magic with the power to change everything! What to do – world peace? Win back her oh-so-perfect ex? Well, if underthinking got her into this mess, her habitual overthinking should be able to get her out of it! When the fairy king Oberon is released from his enchanted imprisonment, he offers Kelly the simplest of gifts: THREE LITTLE WISHES. That’s all, no need to think too hard about it. Just wish for what you’ve always wanted, and he’ll give you exactly that. Exactly, to the T… what could possibly go wrong?

“I’ve been a fan of Paul since Doctor Who, and I jumped at the chance to work with him. When I first heard the pitch for Three Little Wishes, I loved his snappy dialogue and Kelly’s desire to change the world for the better. It’s been a blast working with this creative team and bringing the story to life, and I hope readers enjoy following Kelly, Oberon, and Annie on their hilarious chaotic adventures!”

“It’s been a delight to work with this incredibly talented team on a proper magical rom com that asks some big questions about the modern world. 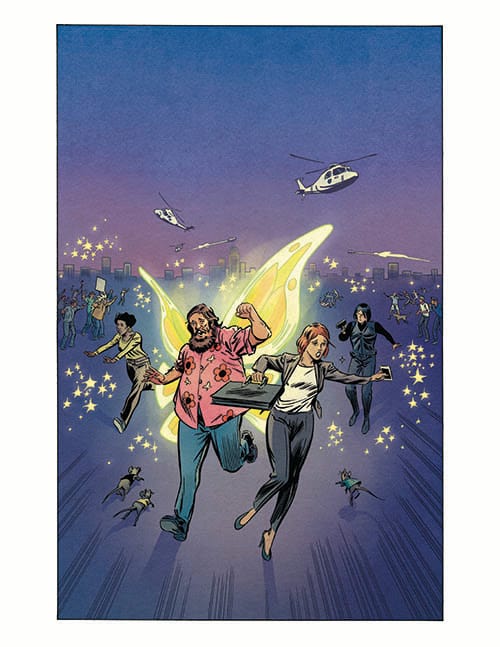 In addition to announcing Three Little Wishes, fans were treated to a sneak peek at how Legendary selects and creates stories for the screen and page during today’s C2E2 virtual panel. Napton was joined by Jennifer Breslow (EVP of Television and Digital Media) and Barnaby Legg (SVP Creative Strategy) as they discussed their roles at Legendary and what they look for when choosing projects for development. Cornell and Legendary Comics’ Senior Editor Nikita Kannekanti then discussed creative pitches that have inspired them and were joined by the full Three Little Wishes creative team—Yeowell, Pippa Bowland (colorist), and Simon Bowland (letterer)—as they divulged details about the new graphic novel. To access the full C2E2 panel, visit C2E2.com.

Three Little Wishes, the fantasy romcom original graphic novel following a contract lawyer, who upon discovering a fairy that grants three wishes, attempts to fix the world, will be available to readers in stores and online on July 12, 2022.