ALL-OUT AVENGERS DROPS READERS RIGHT INTO THE ACTION OF THE AVENGERS’ MOST EXHILIRATING EXPLOITS!

Coming this fall, Derek Landy and Greg Land team up to deliver an Avengers ongoing series like none other in Marvel Comics history

ALL-OUT AVENGERS will be written by award winning novelist Derek Landy, known for his outstanding work in the recent CAPTAIN AMERICA & IRON MAN limited series. Landy will be joined by Greg Land, the superstar artist who over the years has brought some of Marvel’s most memorable battles to life. Together, Landy and Land will throw readers into the middle of some of the Avengers’ most pulse-pounding adventures to date! From page one, panel one, the Avengers will be knee deep in the action with no setup, no explanations, and no time for questions! Beware of whiplash as you discover more with the flip of each explosive page!

The opening issue will star all your favorite A-List Avengers–Captain America, Iron Man, Thor, Spider-Man, Captain Marvel, Black Panther, Blade, and Spider-Woman—as they overcome the odds and struggle to diffuse a chaotic situation caused by a deadly new Marvel villainess… They’ll have to perform feats like never before as each breathtaking issue raises the stakes higher and higher for an overarching and truly unpredictable saga.

Here’s what Landy had to say about the upcoming series:

“When Tom Brevoort approached me with this concept, I thought it was an inspired idea, a slice of creative genius, and also totally unworkable…! But the chance to launch a new Avengers title, and the chance to write any character who’d ever BEEN an Avenger, was impossible for this particular Marvel fanboy to resist. Add in the fact that Tom wanted to get Greg Land on art and my fate was pretty much sealed.

“The trick was to work within the confines inherent in the concept, but also to find a way to deliver what everyone would expect: a continuity of ideas and the development of an overarching storyline. I needed to find the hook that drags the reader from issue to issue, and I figured the best way to do that was to put the Avengers in the exact same situation as the reader: they are aware that this is happening, but they don’t know why…

Greg Land, Jay Leisten, and Frank D’Armata–it’s such a thrill to be working with a team like this, a team responsible for making ALL-OUT AVENGERS the best-looking book you’ve got coming your way.”

“Having just finished up a nice run on the awesome Symbiote Spider-Man series of books, I wasn’t sure what would be next. Getting All-Out sounded like it would be good but I got really excited when I read the synopsis,” Land added. “After reading Derek’s script for #1, I knew it was going to be a fun and challenging project. All of the scripts so far have been full of interesting and cool scenes for our changing roster of Avengers. Hitting each issue in the middle of the action is a terrific story vehicle and gets us off running from the start. I hope everyone can see the excitement in the artwork and all-out action( pun intended). Along with my very talented buddies Jay Leisten and Frank D’Armata, we hope to give readers something to enjoy!”

Get your first glimpse at interior artwork below and prepare for an unforgettable experience with ALL-OUT AVENGERS this September! Get your first taste of what’s to come in FREE COMIC BOOK DAY: SPIDER-MAN/VENOM #1 on May 7! For more information, visit Marvel.com. 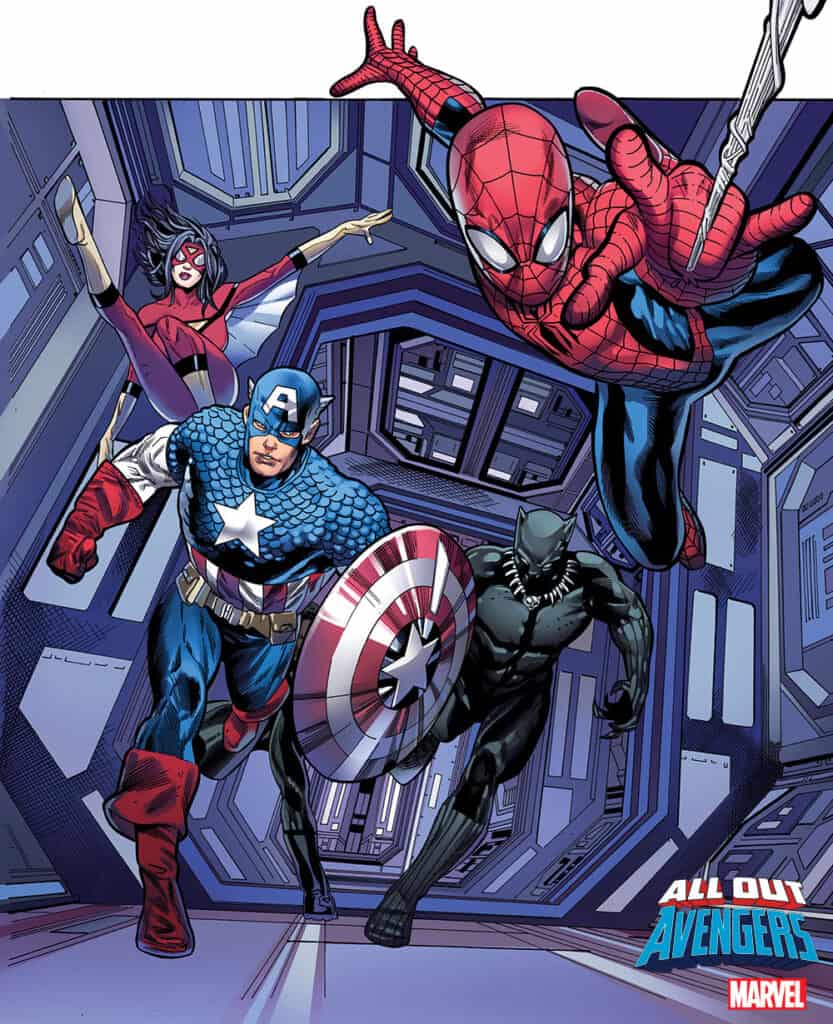