Marvel’s first Latino superhero was White Tiger, created by writer Bill Mantlo and artist George Pérez in 1974’s DEADLY HANDS OF KUNG FU #19. Since then, Marvel has introduced many new Latino-descent heroes from a multitude of different backgrounds including current stars such as Miles Morales, America Chavez, and Reptil. 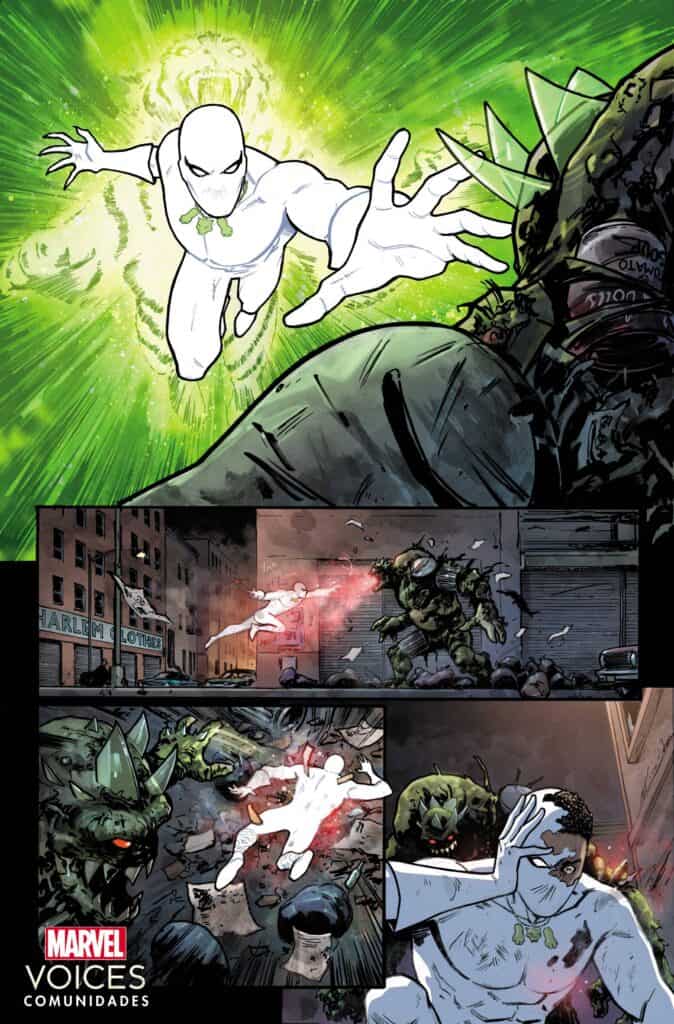 “As Marvel’s first Latinx Super Hero, White Tiger holds such an integral and iconic status in comic book history, and it was an incredible honor and privilege to be able to write a story about him and the legendary Young Lords, revolutionary activists from the same era. I’m thrilled to be part of this amazing project along with so many incredible creators.” 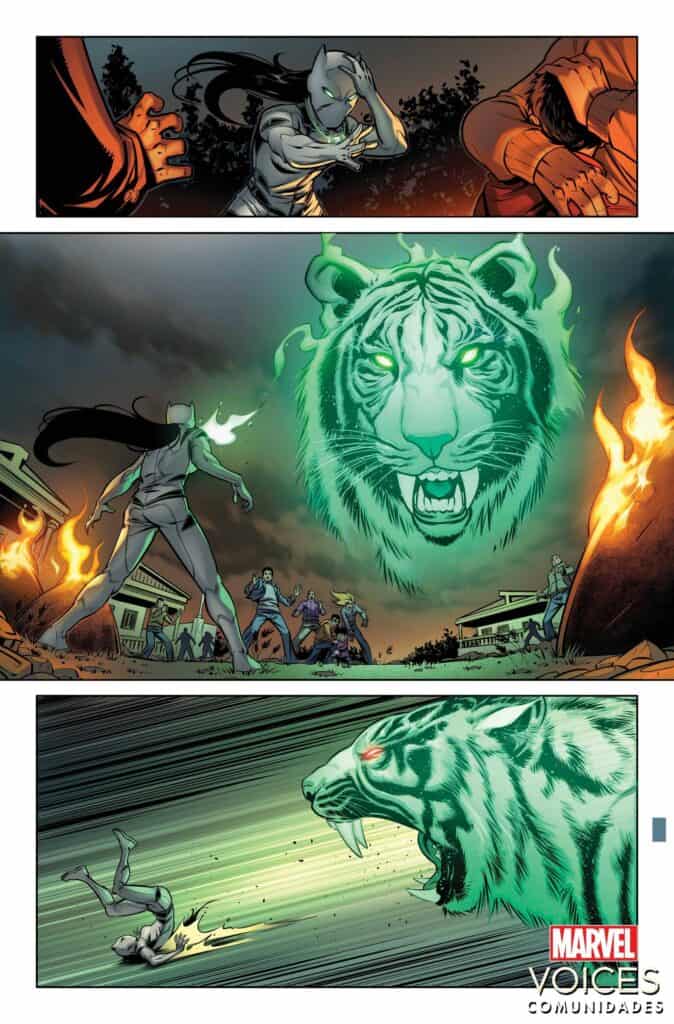 Another story will feature White Tiger (Ava Ayala) written by Amparo Ortiz, who had this to say about the project:

“Writing a story for Marvel was already a dream come true, but to slip into Ava Ayala’s shoes in Puerto Rico is an honor I’ll cherish forever. I wanted to redefine what she considers strength and reinforce her commitment to the island her family calls home.” 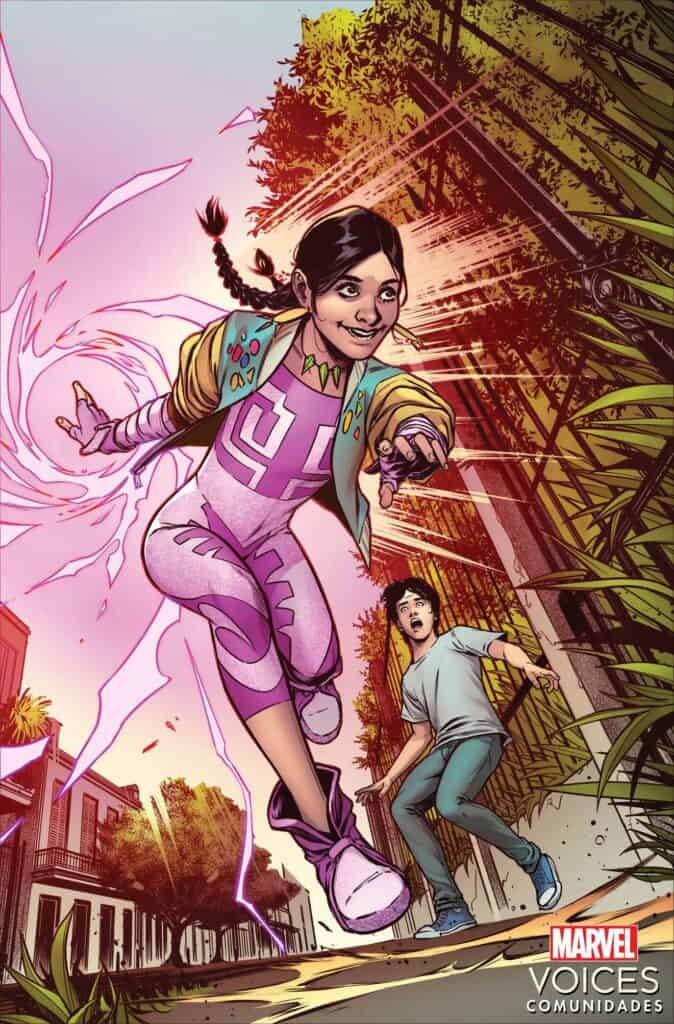 Writer Terry Blas had this to say about his contribution:

“It’s important for me that Latinas see themselves reflected back as smart and resourceful and brave and adventurous. Eva’s character is very much informed by that and sending her to Strange Academy and off on an adventure with fellow Mexican student, German Aguilar was such a fun way to showcase both of their powers and the possibilities they hold. She made a promise to Humberto/Reptil that she wouldn’t stop learning magic until she knew how to find his parents and Comunidades kicks off the beginning of her journey to do that.” 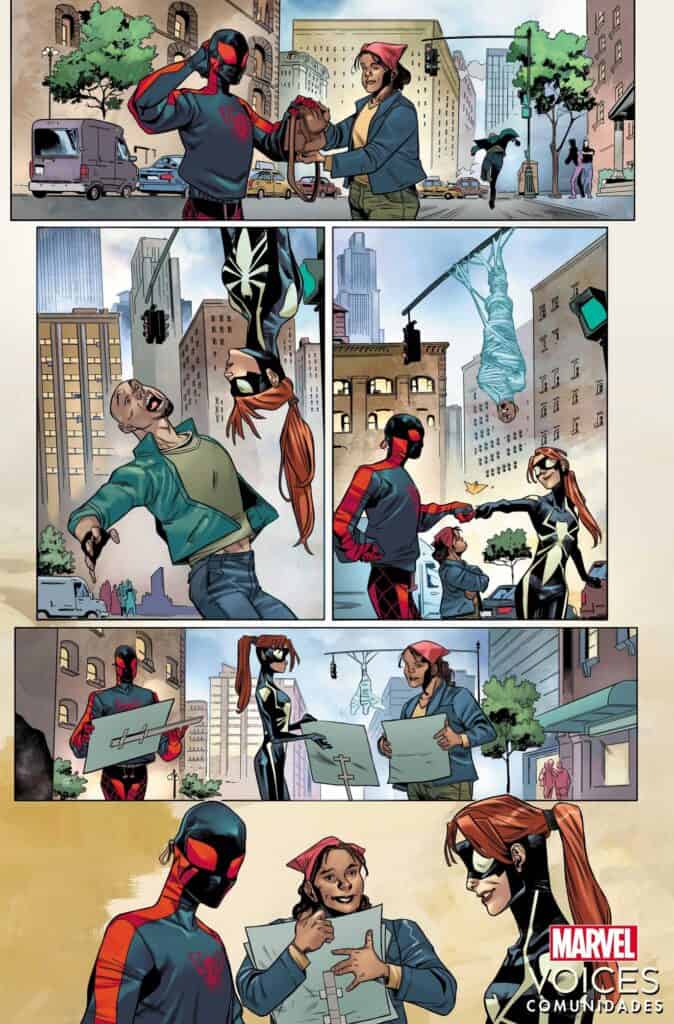 Julio Anta, who is pairing Miles Morales and Spider-Girl Anya Corazon discuss the term Latinx and what it means, said about his story:

“I’m so proud to participate in this MARVEL VOICES anthology, and honored to have the opportunity to tell this story–a multi-generational conversation between Anya Corazon, Miles Morales, and his mother Rio about the term ‘Latinx. While this is no doubt a contentious topic within our community, I hope that this comic helps to explain it, and makes a case for inclusive language and respecting each other’s personal identities.” 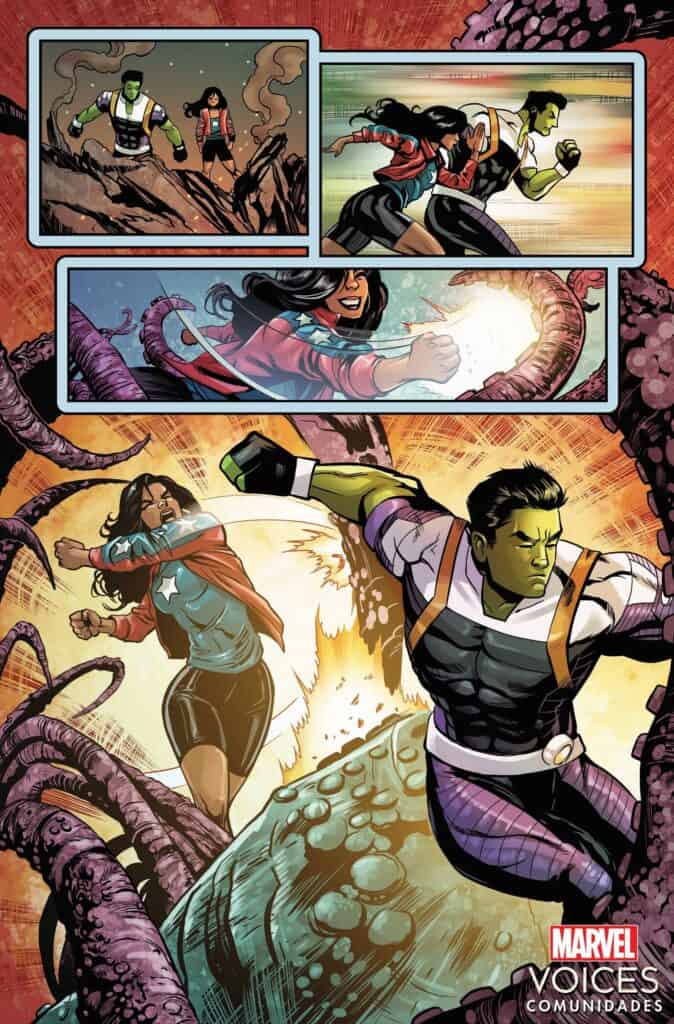 Claribel A. Ortega, whose contribution features America Chavez, said about her experience:

“I am honored to be featured among so many amazing creators. America Chavez is an iconic character and getting to continue a small part of her story was a dream come true for me as a Marvel fan.”

“Fate and the Sorcerer Supreme” Starring Nina the Conjuror 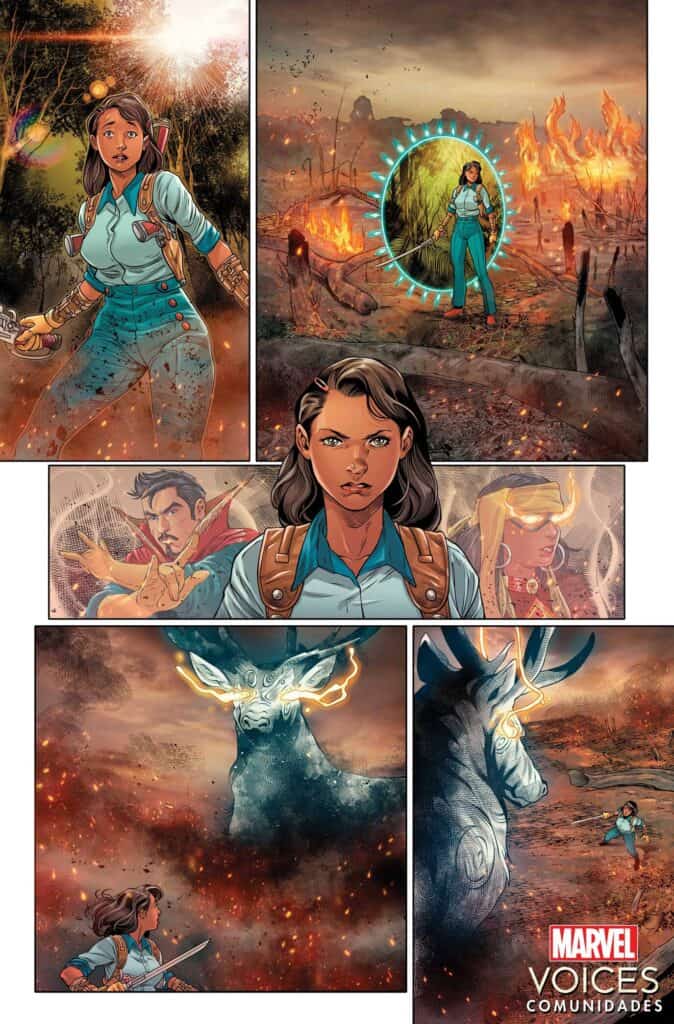 Writer Juan Ponce said about his experience on the book:

“It’s truly an honor to take part in such an important book–in my wildest dreams, I couldn’t imagine this. Nina the Conjuror is the Brazilian Sorcerer Supreme of the 1950’s, her world is so unique, I knew early on I just had to tell a Nina story, because she’s truly one of a kind.” 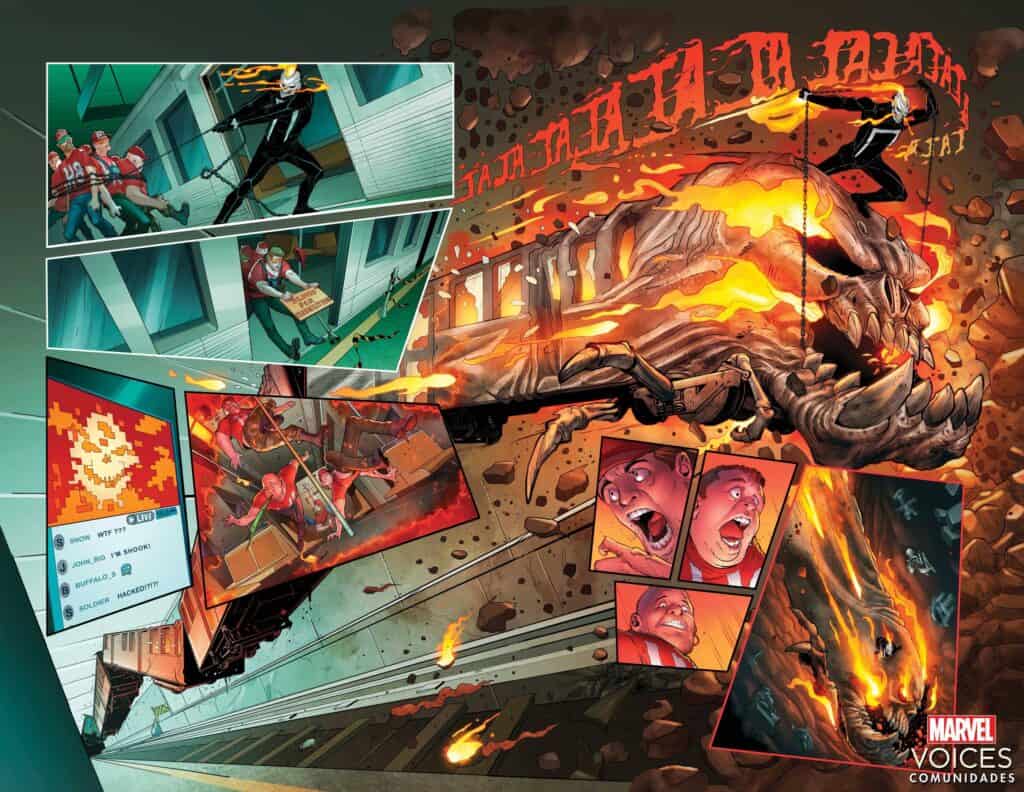 “I was absolutely thrilled to be able to play in the world of Ghost Rider, especially with Robbie Reyes. I’m a huge fan of Felipe Smith and Tradd Moore, the original creators, and I love putting car chases in my books. I think it’s more important than ever to highlight strong, heroic Latinx characters. My one-shot is definitely not subtle, but we live in very unsubtle times.” 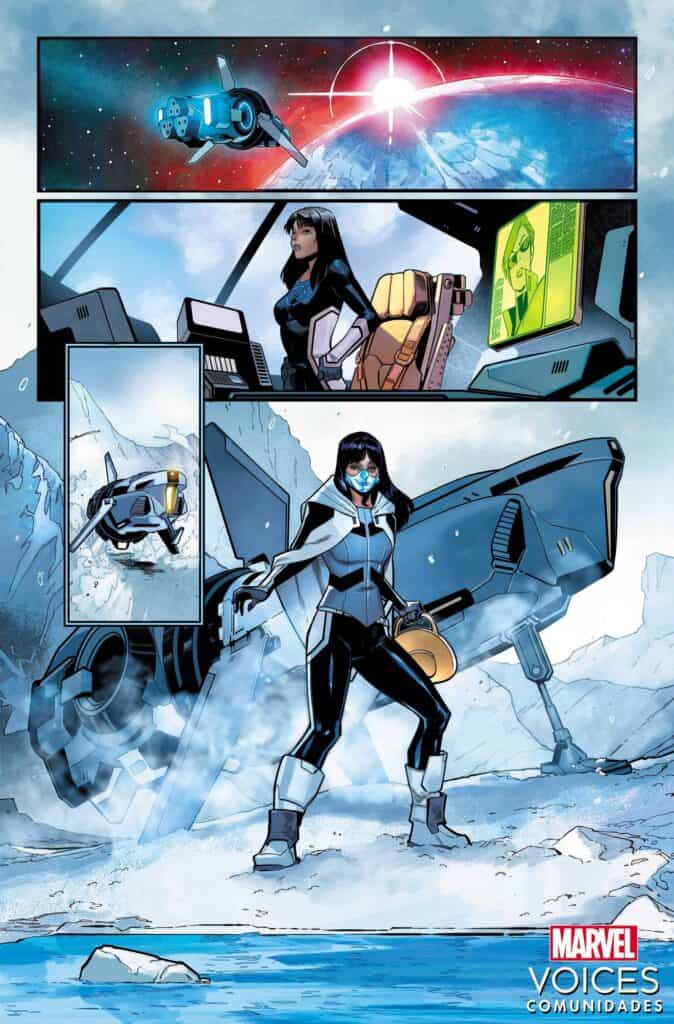 Desirée Proctor & Erica Harrell, who feature the X-Men’s Risque, had the following to say:

“With the X-Men expanding their territory beyond Krakoa, we thought Risque would have an interesting point of view on this as both sides of her family (Cuban and Seminole) were oppressed by foreign colonizers. We’re so excited Marvel let us tell this story, and to work alongside Paco Medina, Frederico Blee, and Ariana Maher.” 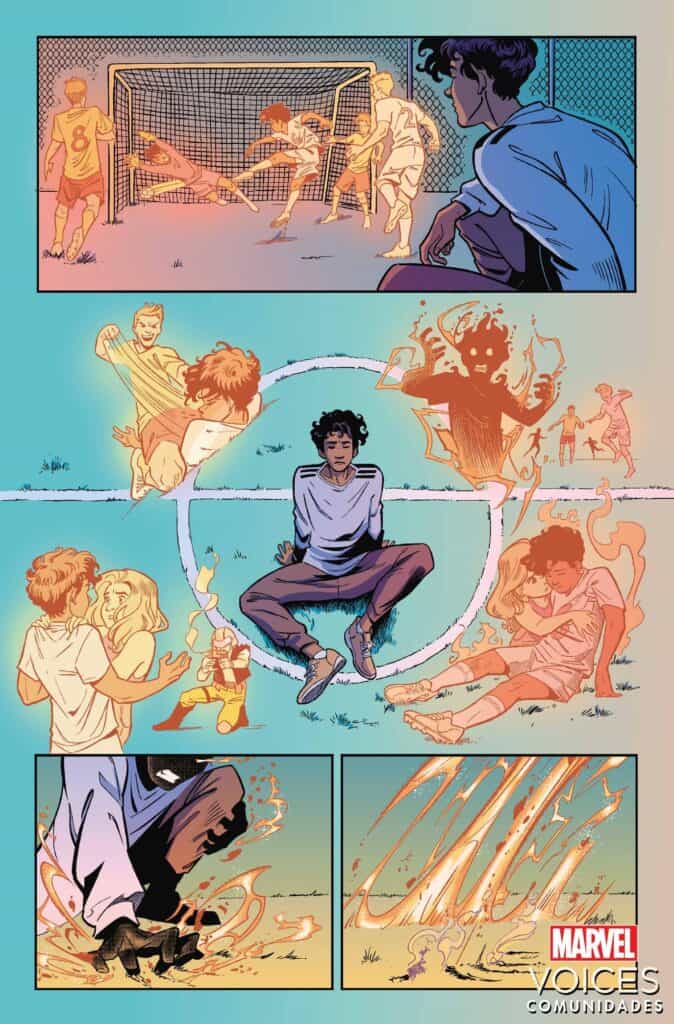 Segura had these words about his contribution, featuring the mutant Sunspot:

“I grew up reading X-Men and New Mutants and have a love for the Claremont/Sienkiewicz run, so being able to add to that mythos through one of my favorite X-characters, Sunspot, was a huge honor  hope fans enjoy our story.” 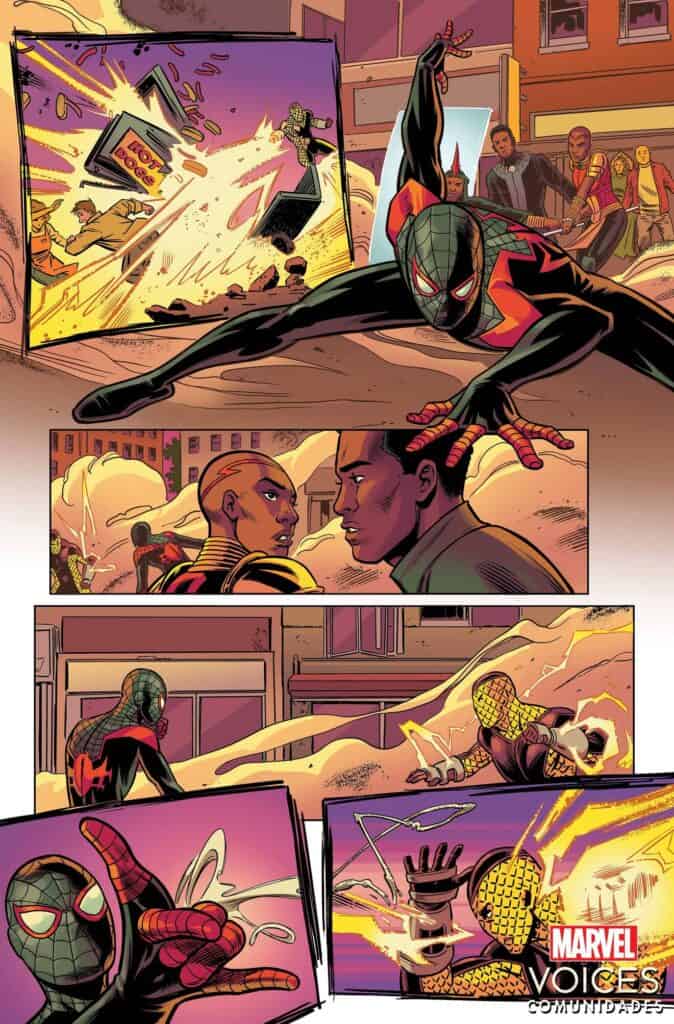 Betancourt said the following about the opportunity to tell a Miles Morales story:

“The chance to be the first writer that is both Puerto Rican and African American to craft a story for Miles Morales was an opportunity I could not pass up. There isn’t a Super Hero in all of comics that means more to me and I’m excited to have contributed to this Spider-Man’s mythos.”

Along with these stories, the issue will feature a variety of variant covers: 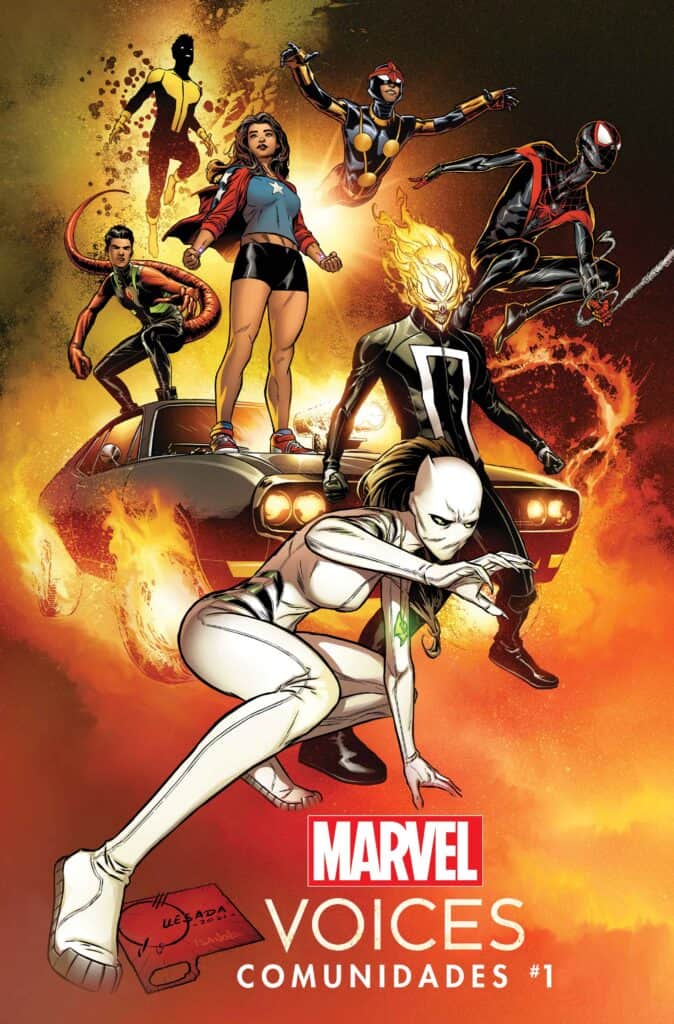 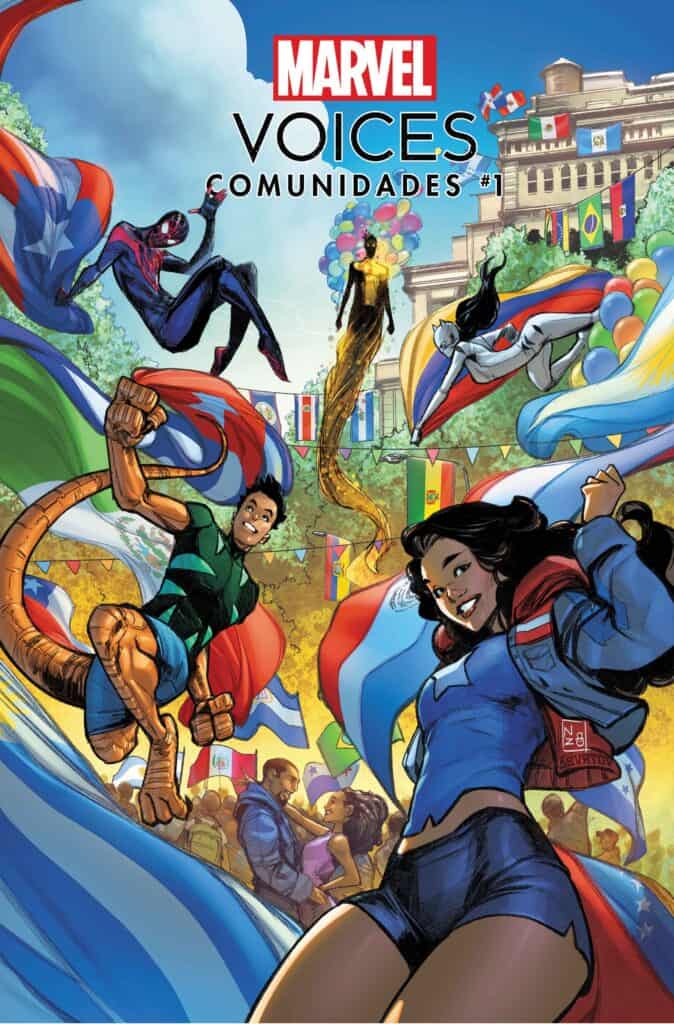 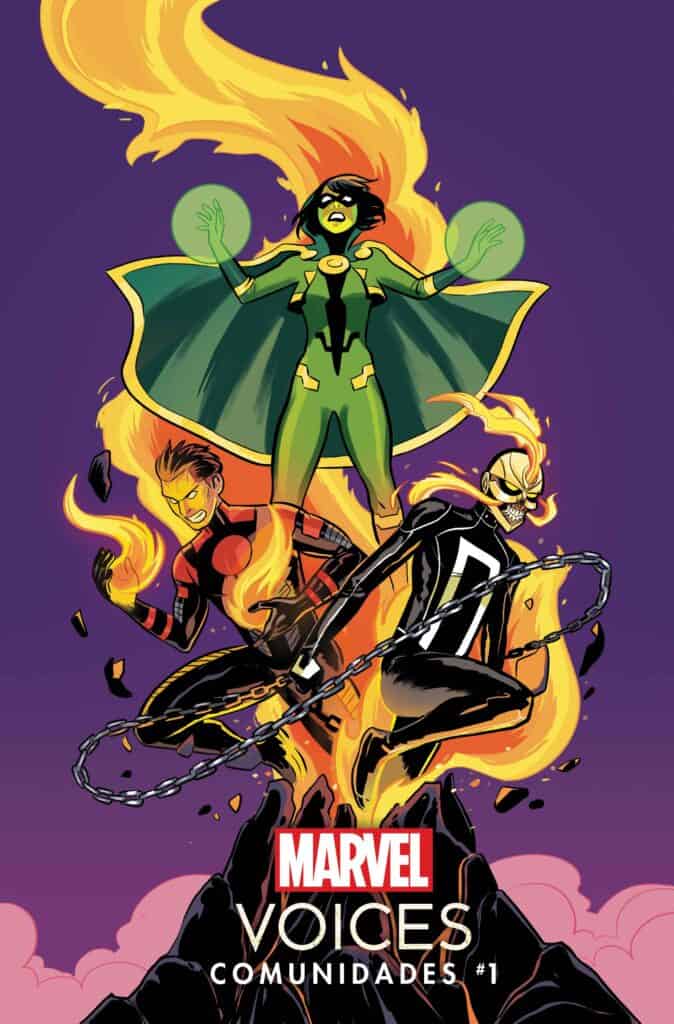 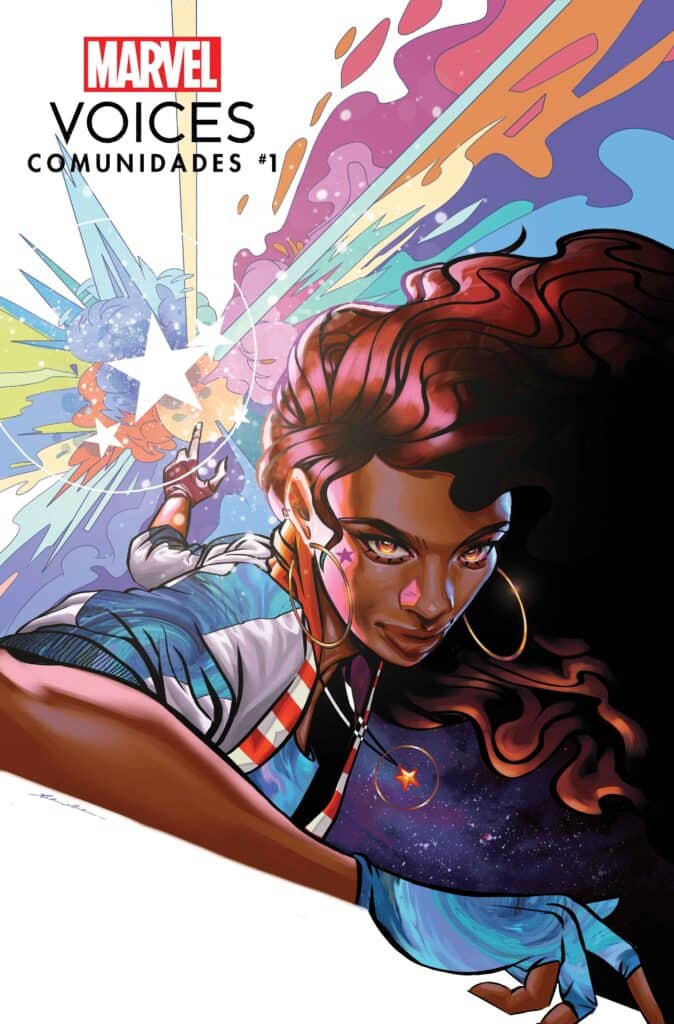 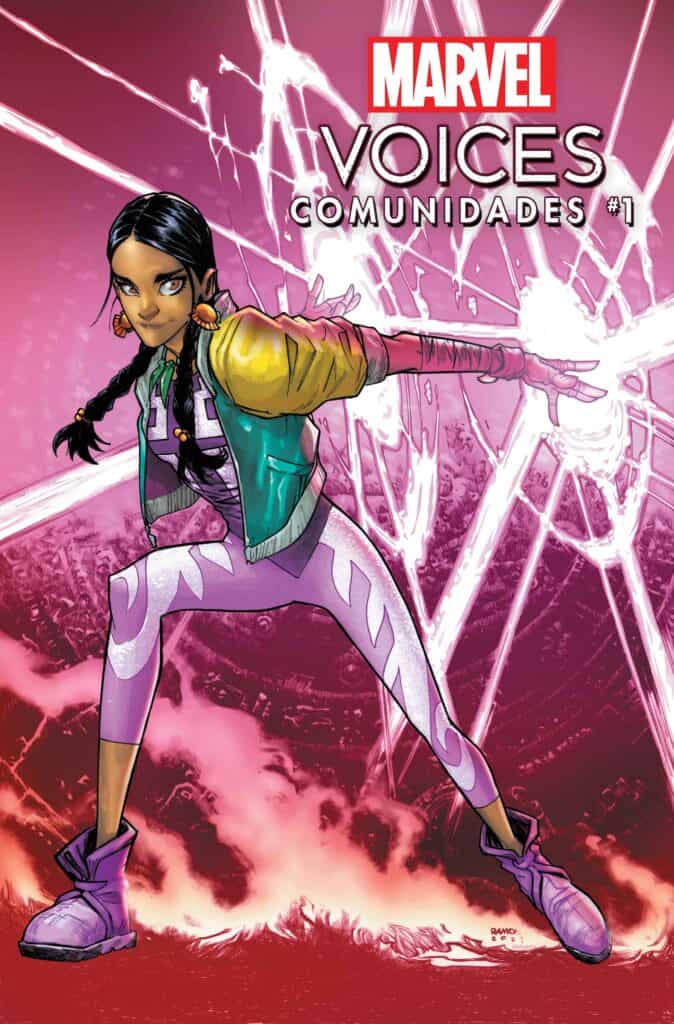 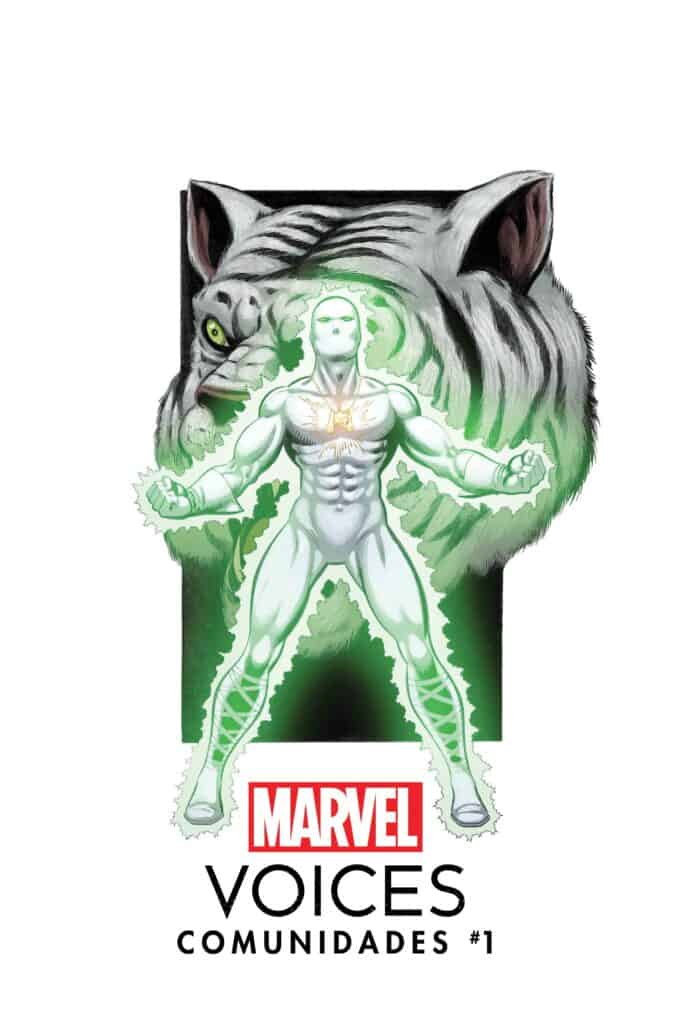 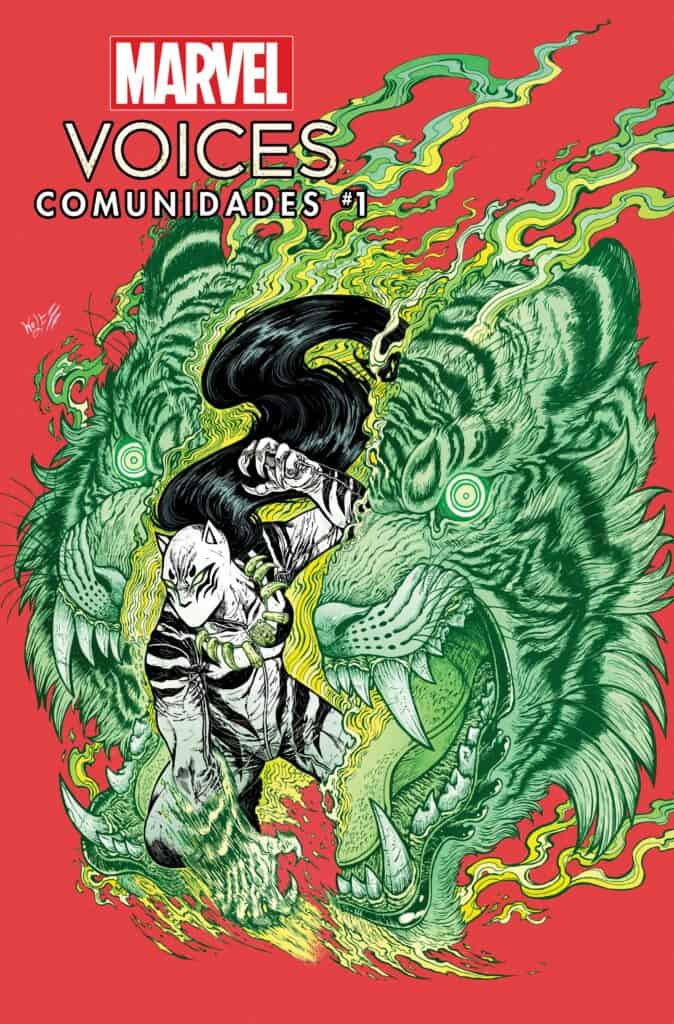 MARVEL’S VOICES: COMUNIDADES, the latest one-shot in the groundbreaking Marvel’s Voices series will continue the tradition of highlighting the cultural richness of the Latino/ Latinx voices in from Marvel Comics on November 10, 2021.