Riding the coattails of the highly successful film, Marvel announced earlier today that Miles Morales will be getting a six-issue limited series, aptly named: Spider-Verse.  The title will feature the talents of writer Jed Mackay and artists Juan Frigerim Arthur Adams, Stuart Immonen, Stacey Lee. You can read the synopsis and check out art for the first issue below. Make sure you keep your browsers pointed to comic-watch.com/ for all your San Diego Comic-Con news!

Miles Morales finally feels like he GETS this Spider-Man stuff… and then falls through a portal! But isn’t the WEB OF LIFE & DESTINY destroyed? Maybe not, True Believer. But who spun this new web? Regardless, Miles finds himself at the center of a multiversal adventure that will feature a who’s who of creators and characters as the series spins forward! And with a main cover by INTO THE SPIDER-VERSE character designer WENDELL DALIT!!! And each issue features #SPIDERSONAS from some of the biggest Spidey fans and comic creators both! 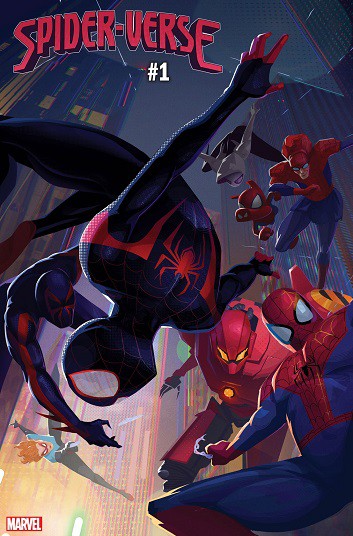