Fan-favorite writer Chris Condon and artist Jacob Phillips return to the popular crime series That Texas Blood for an all new story arc with issue #7 June from Image Comics, picking up the story after volume one’s traumatic and bloody conclusion and drop readers straight into a harrowing new chapter.

In a press release from Image Comics, writer Chris Condon said about returning to the series:

“Returning to Ambrose County and these characters is like going home in many ways. They feel like old friends more than old creations and none more so than Sheriff Joe Bob Coates. I’m beyond excited to explore a bit of Joe’s past in this next story arc as we travel back in time to 1981. We’ll see new places, meet new people, and explore ideas we haven’t before. I’ve always believed that the beginning years of any decade are the hangover of the previous one, and I am absolutely thrilled that we are allowed to dissect this over the next six issues with our merry band of Ambrose Countians, but don’t be fooled, we aren’t viewing the past through rose-colored glasses. I’ve said before that Texas is America’s mystical land, but every fantasy world has a minotaur lurking in the dark or a dragon breathing through smoking nostrils over armor-clad corpses. Our Texas is no different. The shadows there stretch to the horizon, devouring all light. But there are some who see the darkness and strike a match to light the way. I hope that you’ll join us on our trip down Highway 90, into the heart of Ambrose County and into the dark depths of the past. But don’t you fret, we’re not out of matches yet.”

In That Texas Blood #7, Joe Bob reminisces about one of his first cases: a haunting and bizarre evening that left a boy dead, a girl missing, a cult on the loose, and introduced a mysterious man called Harlan Eversaul.

Phillips added: “We are taking a deeper dive into the world of Ambrose County, blowing off some of that desert dust and seeing what lurks beneath.” 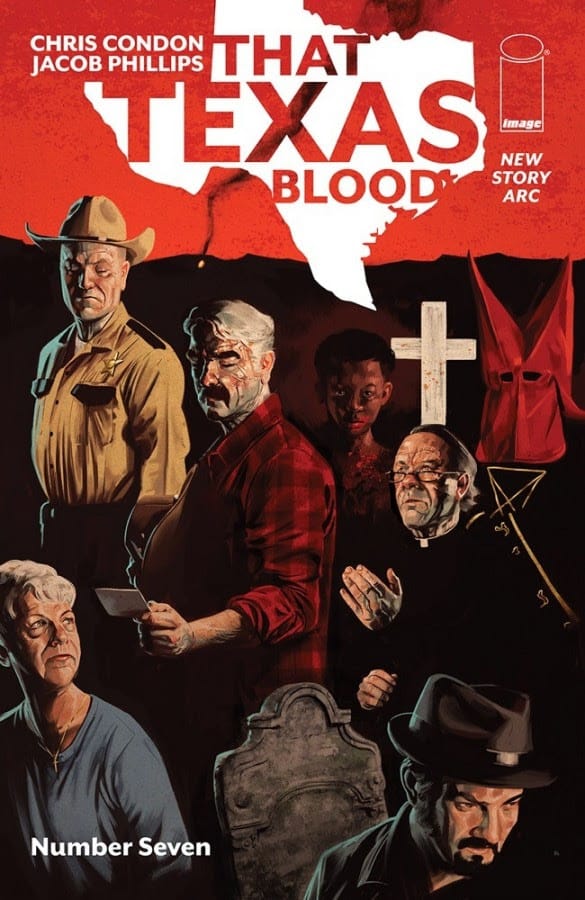 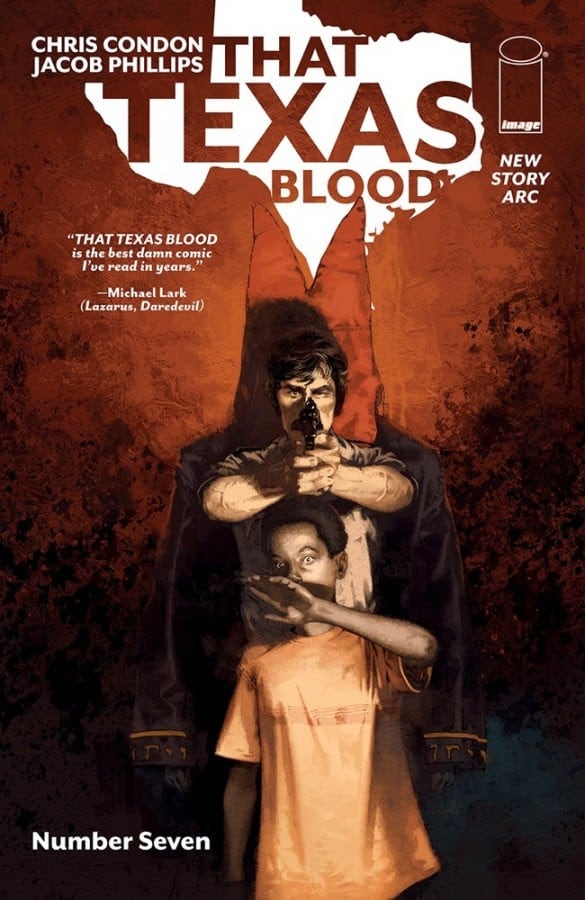 “Chris and Jacob pull off something remarkable here. A vivid and bright story that nails a thorough sense of foreboding and darkness. A shocking amount of talent for a duo so fresh to comics!” —Chip Zdarsky, Sex Criminals, Daredevil

“Blood and cruelty spill into the kindness and manners that provide Coates’ town a quaint, charming appeal… That Texas Blood is a ghost story and a Western, and it questions whether there is a difference between the two. As it builds upon the legacy of other modern Westerns, which raised similar questions, it’s not difficult to see how the series may stand comfortably upon the shoulders of giants.” —ComicBook.com

“What starts as a slice-of-life comic set in the heart of Texas, with Western undertones, quickly shifts more towards horror, with Phillips delivering gruesome imagery as Condon reveals cracks in their protagonist’s inner psyche. This turn hints at a more contemplative and cerebral approach on a familiar story; there is horror to be had in That Texas Blood.” —Comic Book Resources

“Immersive and bold, That Texas Blood will resonate with anyone thirsting for a full bodied, neo-western noir.” —Multiversity Comics

“A great comic that holds up as one of the best examples of crime noir in years.” —Monkeys Fighting Robots

That Texas Blood, Vol. 1 is available now and can be purchased from your local comic book shop or independent bookstore via Bookshop or IndieBound, or it can be pre-ordered on Amazon, Barnes & Noble, Books-a-Million, and Indigo and also available for purchase across many digital platforms, including Amazon Kindle, Apple Books, comiXology, and Google Play.