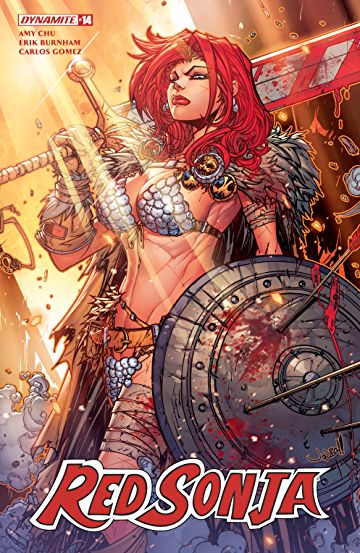 The Millennium films “Red Sonja” project that had been slated for last years America Film Market was to be a big-budget, action-fantasy movie expected to start shooting in Bulgaria this year, even though it had no cast to speak of, is now on permanent pause. “Red Sonja” was to be a film adaptation of the comic book of the same name about a strong warrior woman with a dark past set in the sword and sorcery Hyborian age world of Conan the Barbarian. The movie has been on The Expendables outfit’s slate for more than ten years is no longer happening according to the prolific U.S. Mini-studio.  “The project is not on the slate at the moment and is not for sale at the EFM in Berlin.” in an exclusive with DEADLINE.com.

Bryan Singer, best known for directing and producing X-Men movies and X-men related TV shows, also most recently directed Bohemian Rhapsody which is nominations for five Oscar’s including Best Picture. His next project was “Red Sonja”  now appearing dead in the water. Singer who has yet to be formally removed from the “Red Sonja” project is under scrutiny for multiple sexual misconduct allegations including some that detail the director as having sex with underage boys as written in a expose done by the Atlantic.

As Singer adamantly denies any misconduct and has yet to be charged with any crimes. His career has been affected as many entities in the film community have begun to distance themselves from the director. This year BFTA awards removed the filmmaker from contention in its Outstanding British Film Category in response to the allegations and the U.S. GLAAD awards went as far as to remove the Queen biopic from its nominees.

When asked about comments he had recently made about praising Singer, Millennium Films CEO Avi Lerner, said “they came out the wrong way” and went on to say “I think victims should be heard and this allegation should be taken very, very seriously.”