Scout Comics’ longest-running comic series SOLAR FLARE, about a large x-class solar flare that hits Earth, wiping out all electricity and most modern technology, is in development as a live-action television series with John Baldecchi’s Digital Riot Media. Written and created by James Haick III, this series follows Jake Clifford and his small group of friends as they begin their dangerous journey from Florida to Tennessee after the world goes dark. Their initial goal is to help reunite Jake with his young daughter Mazzy, but the group begins to realize that they are instrumental in helping restart the world. Meanwhile, a militant group known as the New Americans are after the top-secret information that they possess and are hot on their heels.

From Creator James Haick III:
“Knowing just how driven and passionate the team at Digital Riot Media is about putting out exciting and entertaining stories that the fans love, it makes me incredibly excited to have them leading the charge in developing SOLAR FLARE for television.” From Scout CEO Brendan Deneen:
“James has created a very exciting and emotional series that the Scout team loves presenting to our fans issue after issue. We look forward to working with Digital Riot Media to develop SOLAR FLARE for the small screen.”

John Baldecchi is an accomplished movie and television producer with a successful string of high-profile projects and hundreds of millions of dollars in box-office revenue. His film, ‘Happy Death Day,’ a $5 million feature, grossed $125 million worldwide. Other projects include Happy Death Day 2U, Point Break ($100 million remake) for Alcon Entertainment & Warner Bros., based on the seminal action film, ‘The Mexican’ (starring Julia Roberts and Brad Pitt), Simon Birch (starring Jim Carrey & Ashley Judd), and Odd Thomas (based on the Dean Koontz novel). John was also President of Laurence Mark Productions, which produced Jerry McGuire and As Good As It Gets, and has produced films for Disney, Sony, Warner Bros. and Twentieth Century Fox. 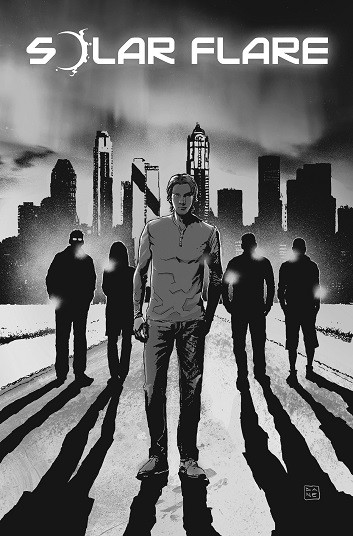