THE DeMULTIVERSE consists of four new #1 issues for four new titles, each one different in genre, style,  and tone. There’s ANYMAN, a classic superhero comic with a contemporary twist. LAYLA IN THE  LANDS OF AFTER, an all-ages fantasy. WISDOM, a supernatural Western. And GODSEND, a mind-warping mystery with hints of Jack Kirby’s New Gods, The Matrix, and Philip K. Dick.

The four DeMultiverse titles will be available separately as single comic books or collected in a 100+ page trade paperback featuring a bevy of bonus material, such as introductory essays for each title by J.M.  DeMatteis, behind-the-scenes art extras, script pages, and a foreword penned by former Marvel Comics Editor-in-Chief, Tom DeFalco. The single issues will also be offered with variant covers by some of the industry’s top artists, among them JH Williams III, Dustin Nguyen, Liam Sharp, and Kevin Maguire. 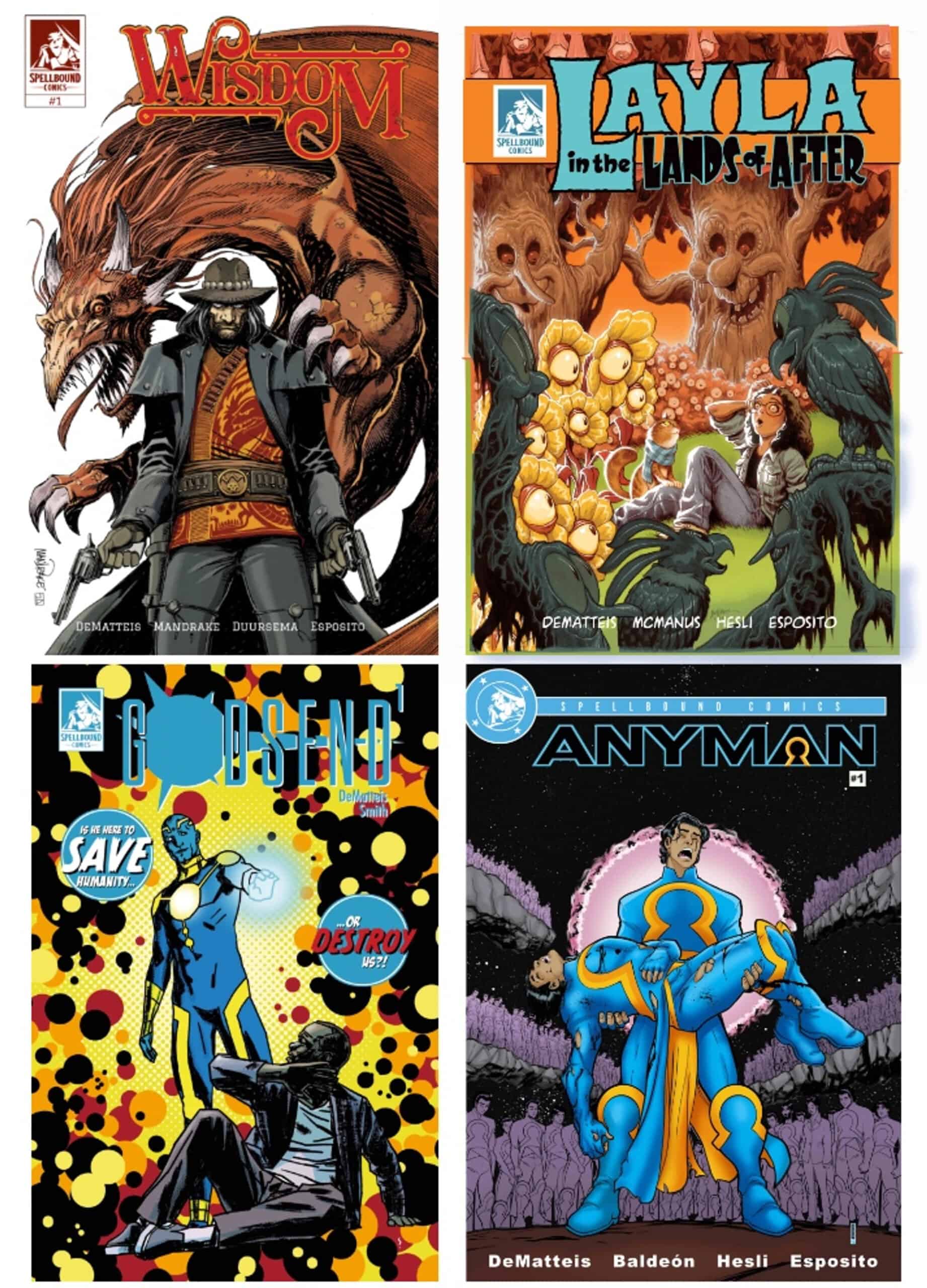 The full campaign can be found on SpellboundComics.com, and the Kickstarter campaign will run for 30 days, starting at 12:00 pm EST on October 11th and ending on November 10th at 12:00 pm EST. All books are estimated to begin shipping in Spring 2023.

“Unlike many companies who use Kickstarter to raise funds to produce their projects, our books are already completed and ready to send to the printer,” said David Baldy, Publisher & Founder of Spellbound Comics, as well as a writer/producer on such television shows as Wilfred on FX, Deadbeat on Hulu, and Lewis Black’s  Root of All Evil on Comedy Central. “In today’s comic book marketplace, a boutique publisher like Spellbound would have a hard time getting noticed in the textbook-sized Previews catalog. Rather than rely on the traditional comic book distribution model to reach the readers, we are bringing it to them directly. It’s my dream to produce top-notch, professional comic books featuring surprising stories and original characters and to get them into the hands of readers who appreciate that level of quality as much as I do. We’re hoping the  global reach of Kickstarter, plus audience interest in industry icons like J.M. DeMatteis, Tom Mandrake,  Shawn McManus, Matthew Dow Smith, and David Baldeón, plus the near-infinite entertainment value of  THE DeMULTIVERSE, will combine to achieve a level of success that will allow us to continue this dream  for the foreseeable future.”

“I’ve been a professional writer for more than forty years,” DeMatteis adds, “and the DeMultiverse is one of  the most exciting projects I’ve ever been involved in. These are ideas I’ve been nurturing for years, and seeing  them come to visual life in the hands of our extraordinary creative teams has been a dream come true.”

As an added bonus to THE DeMULTIVERSE launch, every customer who buys all four single-issue comic books or the collected edition, will be given the opportunity to vote for which of the four titles continues to the series first. Spellbound’s second campaign is tentatively scheduled to launch in Fall 2023 with issues 2-5 of the winning series.