NEWS WATCH: Start Your New Year with Bylines in Blood and Fearbook Club

When the series was announced in October, Schultz described it as being “about the death of truth, and how one former journalist regains her humanity,” as well as “crime, corruption, and how many people…but not everyone…can be bought.” Jensen called it “a feminist riff on noir,” and “a mystery with a big hook. Our hero’s old friend has been murdered, but video makes it seem like the killer was invisible. So who killed him, and why?”

A former reporter himself, Jensen cited Ann Nocenti and David Aja’s The Seeds, Blade Runner, and Sam Spade as influences on the book. Artist Aneke said, “I wanted a style where I could feel comfy and be myself. We were thinking in a gritty city but neon-wise, part Transmetropolitan, part Blade Runner, part The Deuce, that’s how I imagine Satya’s world. One thing I do is assign a color or set of colors to each character, so I get in the mood of it and it makes sense to me and gives a differentiation to the scenes and the places.” 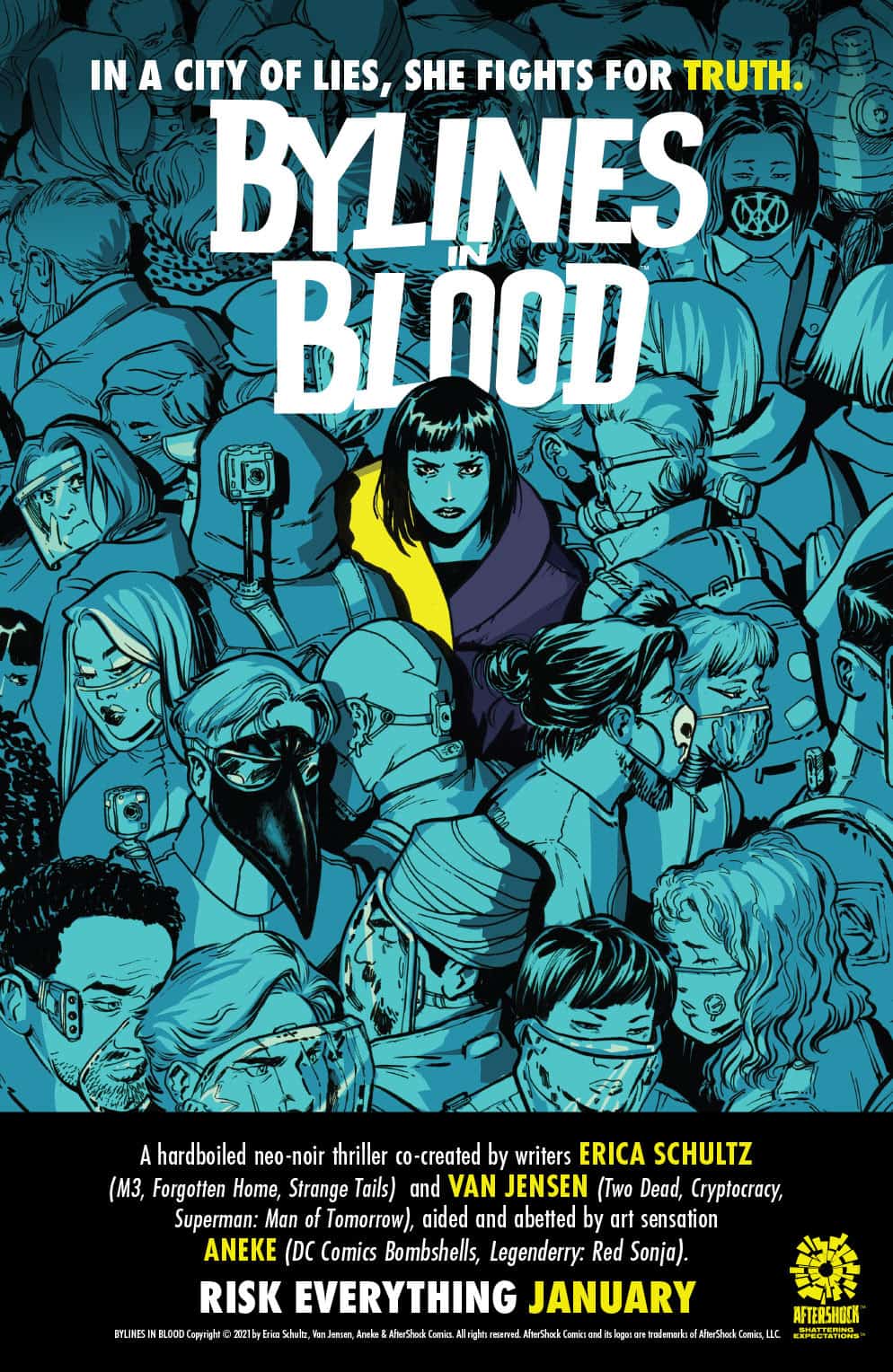 The future. The very concept of truth has died. Politicians invent their own facts, and independent newspapers no longer exist. In this world, private detectives serve as ronin, searching out the hard truths that people are desperate to keep hidden.

The best of these is Satya, a former journalist turned gumshoe who runs every lead to ground. But Satya has just received her hardest case yet: her old editor has been murdered. Someone wanted him silenced, and the trail points toward the highest bastions of power. To find justice for her friend, she’ll have to put everything – and everyone – she knows at risk. 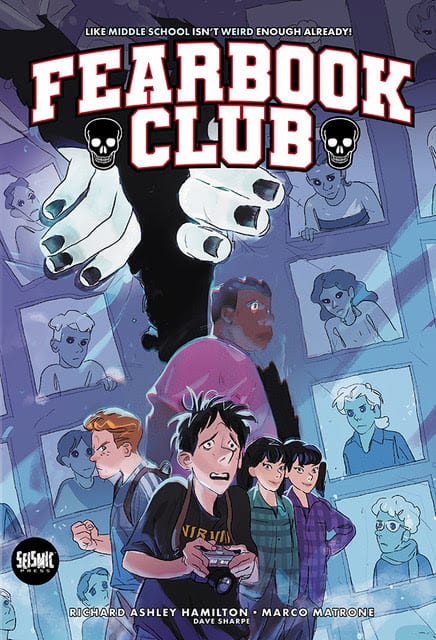 When shy 6th-grade shutterbug Whit Garcia starts middle school, he’s forced to join a yearbook club with three other weirdos who will never be voted “most likely to succeed.” But after the ghosts of missing students start haunting them, Whit, Hester, Hillary and Press must solve the supernatural secret behind these spirits — or their yearbook club will be voted most likely to join them.

But are these ghostly students the real bad guys? Or are they just warning Whit and his friends? Warning them about a darkness beyond their schoolyard…a darkness that threatens to swallow the school – and its occupants – whole.

The sophomore offering from AfterShock’s Young Adult imprint, Seismic Press, FEARBOOK CLUB is a story all about fitting in, fighting ghosts, and forming friendships with other misfits, especially when you’re a misfit yourself. 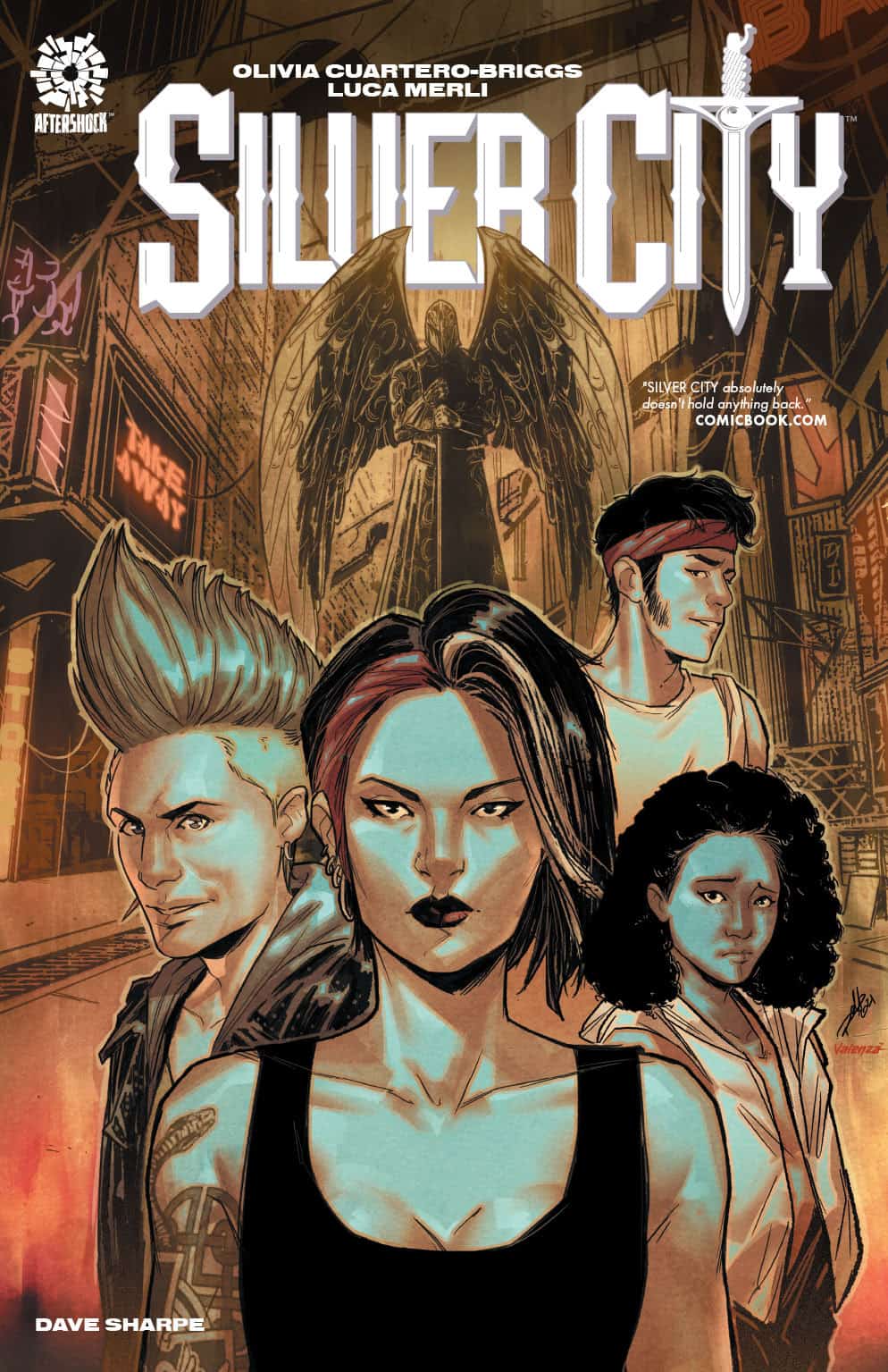 Her Death Was Just the Beginning.

When a young roughneck lands in Silver City, the gritty, purgatorial metropolis of the afterlife, she must adapt to her new existence, while attempting to uncover how and why she died. Her mission is derailed, however, when she rescues a newly dead girl from a mysterious kidnapping attempt, and discovers powerful, kinetic abilities.

Welcome to Silver City, where the sun never rises and nothing ever changes…until now. 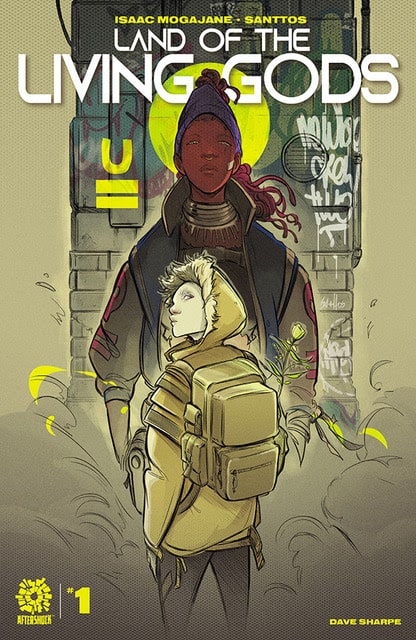 LAND OF THE LIVING GODS #1
IN SHOPS: February 2nd

The end was just the beginning. 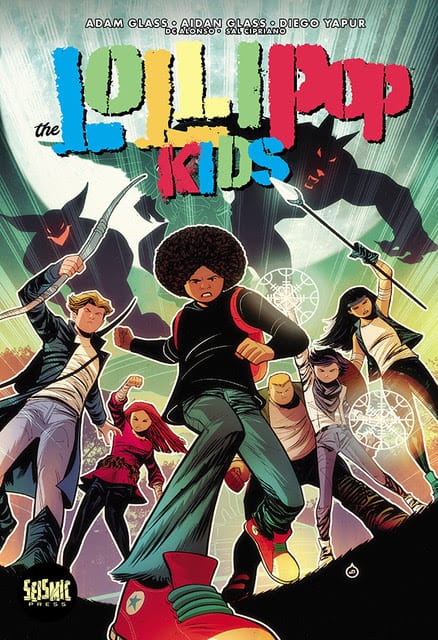 Things that go bump in the night are about to get THUMPED!

NEWS WATCH: Start Your New Year with Bylines in Blood and Fearbook Club