The next Marvel Comics epic is here! From the brilliant mind of superstar writer Kieron Gillen and the incredible talents of acclaimed artist Valerio Schiti comes JUDGMENT DAY, a Marvel Universe spanning event launching in July.

Already redefining the Eternals mythos in ETERNALS, and soon to be shepherding in the next age of mutantkind in IMMORTAL X-MEN, Gillen will take his work on both titles as well as recent storylines in Jason Aaron and Javier Garron’s AVENGERS run for an odyssey that will usher in dramatic developments for these three core Marvel teams. And Schiti, already proven to be a masterful event storyteller in books like EMPYRE and INFERNO, will deliver the breathtaking action and high-stakes thrills that transpire when Super Hero titans clash. Together, these iconic creators have crafted an intense saga that’s destined to take its place among the most impactful events in Marvel Comics history.

The X-Men have achieved immortality and mutants have taken their place as the dominant species on the planet. The Eternals have discovered long hidden knowledge about their species, including a devastating truth about mutantkind. The Avengers have come into direct conflict with the Celestials and are currently using a fallen Celestial as their base of operations, slowly unlocking its secrets… When the Eternals brazenly target the mutant nation of Krakoa, the Avengers try desperately to de-escalate a potentially apocalyptic war. But this is no simple conflict. The Eternals’ purpose cannot be denied and mutantkind’s future will not be threatened. And after the opening battles, new players and revelations for both sides will emerge as the inhabitants of the Marvel Universe are JUDGED by the greatest power they’ve ever come into contact with.

“There’s a classic metaphor to describe the Marvel Universe – a toybox, which creators take toys out of, play with and put back. I get it, but it’s never quite how I’ve seen it – I think ‘play’ in another way. I think of a music shop, with all these instruments with their different qualities suggesting different songs, different stories,” Gillen explained. “For all the Marvel instruments I’ve played, I’ve never written an event. Writing an event is something different. It’s not like playing an instrument. It’s having all the instruments in the Marvel music shop. That’s not like writing a song. That’s like writing a symphony.

“I looked at everything in ETERNALS and IMMORTAL X-MEN and everything else all the X and Avengers writers have done and thought… yeah, this is an event. In fact, an event is the only way to do justice to this. The Beach Boys’ Brian Wilson described the music he was reaching for as Teenage Symphonies to God. I think that’s what the best Marvel Events aspire to be, and it’s what we’re aspiring to here. I want the scale. I want the heartbreak . I want a book that wears its heart on its sleeve even as it puts a fist in your face. I want something Wagnerian in its volume as emotional as God Only Knows.”

“It is great to have the opportunity to draw another Marvel event after Empyre,” Schiti added. “The difference is that last time I was just excited, but now I know how high the expectations are, so now I am both excited and a bit scared! Luckily for me I have the great Kieron Gillen and Marte Gracia watching my back and together we can face any cosmic threat!”

Be sure to pick up FREE COMIC BOOK DAY: AVENGERS/X-MEN #1 on May 7 for your first taste of the action. Stay tuned in the coming weeks for more information, including cover reveals, and witness the buildup to JUDGMENT DAY in upcoming issues of ETERNALS, IMMORTAL X-MEN, X-MEN, and AVENGERS. For more information, visit Marvel.com. 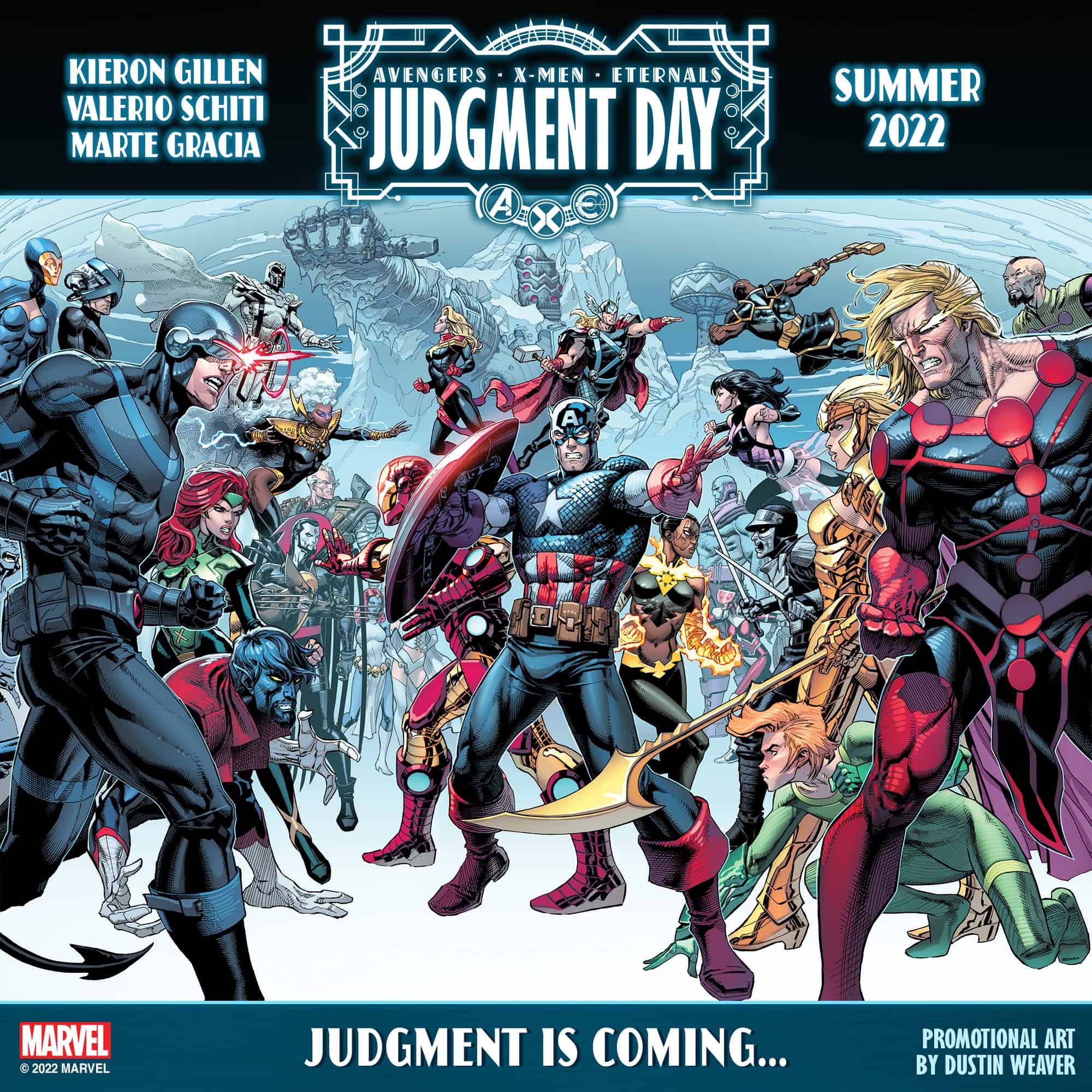