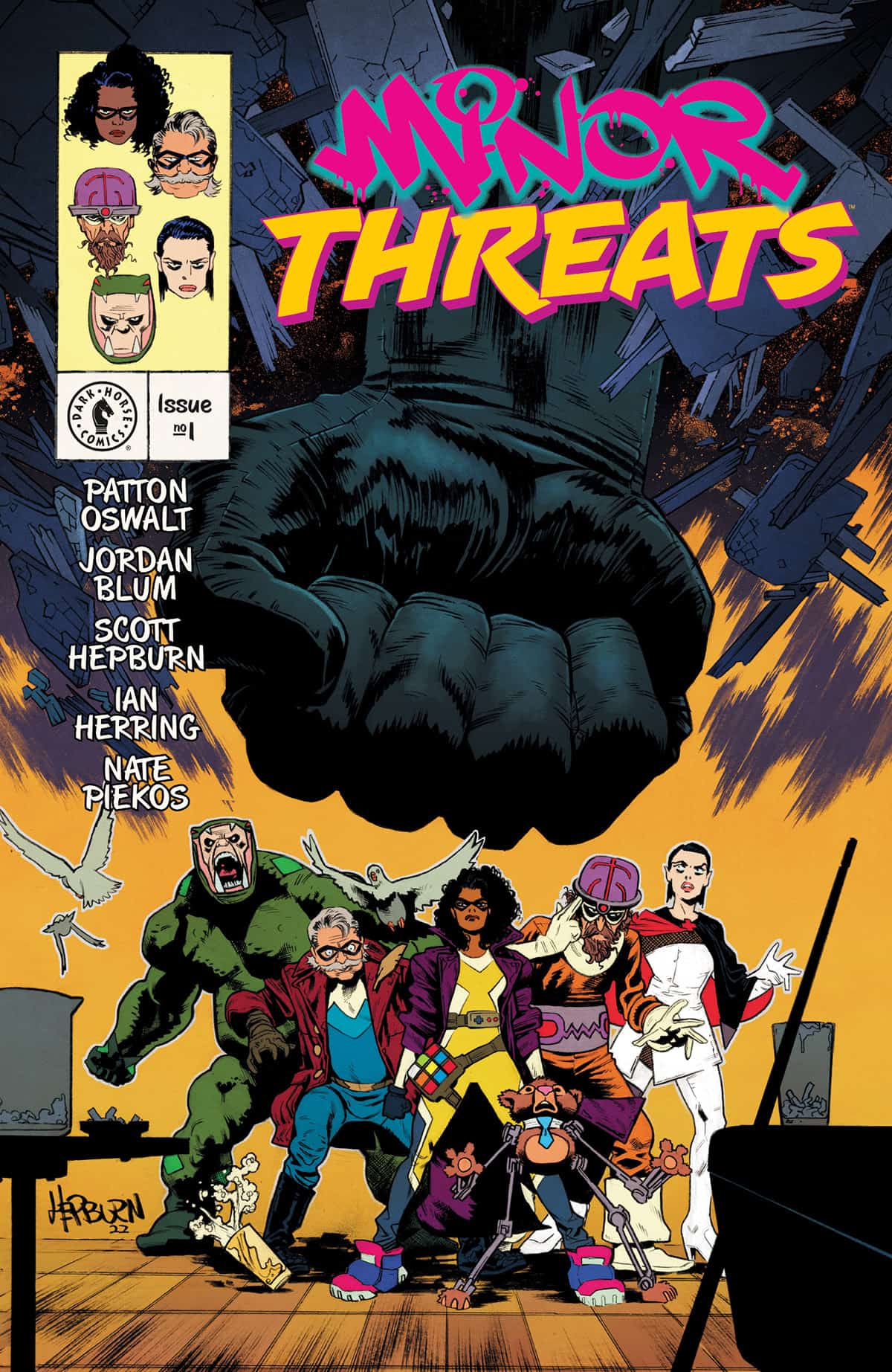 From Patton Oswalt and Jordan Blum, the showrunners behind the hit Hulu series Marvel’s M.O.D.O.K., comes their first creator-owned series Minor Threats. Featuring superstar artist Scott Hepburn (M.O.D.O.K.: Head Games), with colors by Ian Herring, and letters by Nate Piekos, Minor Threats is a genre-bending crime drama about superheroes and villains and the last gasp of the colorful innocent days of the silver and bronze era of comics before they are dragged into the grit-soaked modern times.

It’s hard out there for a supervillain. Not the world conquerors, chaos engines, or arch-nemeses… but the little guys, the career criminals. The ones who put on uniforms, knock over jewelry stores, and get tied to telephone poles before the hero swings off to face the actual big bad. Times are tough for costumed crooks… and they’re about to get much worse. The psychotic Stickman has done the unthinkable and murdered Kid Dusk, sidekick to Twilight City’s premier crime-fighter, The Insomniac. The Insomniac’s teammates, The Continuum, are tearing Twilight apart, turning it into a terrifying police state–desperate to capture the Stickman and stop the Insomniac from “crossing that final line” in which he may never come back from. Caught in the middle are the small-time c-list villains, finding it impossible to pull jobs or even walk down the street without being harassed by these heroes. With a bounty on the Stickman’s head, former villain Playtime decides to put together a ragtag team of equally disgruntled supervillains to take down the Stickman and kill him themselves. Leading her on a dark journey into the criminal underbelly she’s tried so hard to escape.

“Every comic book fan dreams of creating their own universe,” said series co-writer Patton Oswalt. “This one is mine and Jordan’s. There is fun and danger and violence and sadness just like in real life, but with WAY brighter colors. I can’t wait to see you guys experience it.”

Said co-writer Jordan Blum, “This is our love letter to superhero comics and crime fiction. An underdog story of inept costumed criminals in over their heads, trying to survive an unforgiving city filled with caped gods, fallen kaiju, and traffic causing time vortexes. Everyday crooks in a fantastical world trying to get theirs.”

“Work like this is why I’ve always wanted to be a comic book artist,” added series artist Scott Hepburn. “Patton, Jordan, and myself are in a three-way battle of one-ups-manship to prove who loves this book more.”

Minor Threats #1 (of four) will be in comic shops August 24, 2022. It is available for pre-order at your local comic shop. Minor Threats will have a standard cover by Scott Hepburn, a special foil variant of the standard cover, and a variant by Hellboy’s Mike Mignola and Dave Stewart! 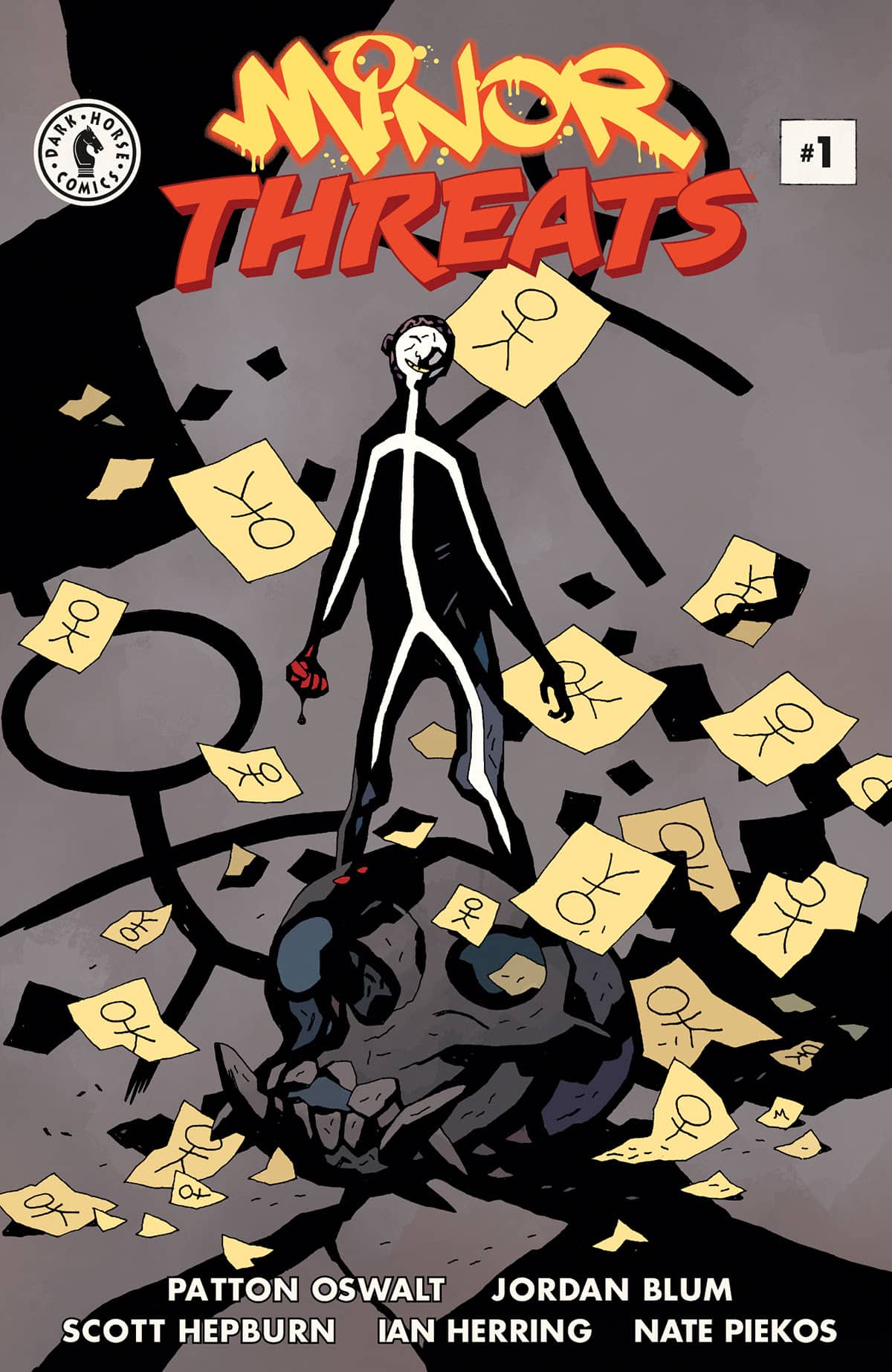 “I was hooked from the first page! Minor Threat is delicious, villainous dark pop that churns up the world of the marginalized and serves up a decadent and dangerous feast, all presented in glorious bombastic visual eye-fuckery that has reignited my love of comics. At last, something cool in a world were nothing is cool.”–Taika Waititi (Director—What We Do in the Shadows, Thor: Love and Thunder)

“Minor Threats is a hardcore blast from the bad brain of Patton Oswalt. I love the full-on collision of his grimy, superhero underworld; with eye-poppingly gorgeous splash pages of art by Scott Hepburn. A naughty peek under the cape that you’ll devour like contraband.” –Edgar Wright (Director—Last Night in Soho, Shaun of the Dead)

“Minor Threats is exactly what one would expect from Patton Oswalt—it’s intelligent, funny, and twisted. I’m also worried about him.”–Judd Apatow (Director—The 40-Year-Old Virgin, The King of Staten Island)