NEWS WATCH: The Legacy of The Heroes Union Continues When Diamond Comics Distributes The BLUE BARON “EVERYTHING OLD IS NEW AGAIN!” #1

Following up the recent premiere of The Heroes Union #1, which reunited legendary artists Roger Stern (The Avengers, Captain America) and Ron Frenz (Thor, The Amazing Spider-Man), Binge Books will release The Blue Baron “Everything Old Is New Again!” #1 on October 27, 2021, distributed by Diamond Comics.

Exploding from the pages of The Heroes Union, Binge Books proudly presents the sensational solo adventures of The Unbeatable Blue Baron! Since 1776, The Blue Baron has battled alien invaders, super-powered psychopaths, and megalomaniacal mutants. Still, his greatest challenge awaits him inside this groundbreaking, extra-length, standalone epic from Darin Henry, Ron Frenz, and Sal Buscema and featuring a jaw-dropping jumping-on point over 200 years in the making.

Written by Emmy-nominated TV writer Darin Henry (“Seinfeld,” “Futurama”), along with celebrated artists Ron Frenz (Spider-Man, Thor) and Sal Buscema (Captain America, The Defenders), this book features the first solo adventure of The Unbeatable Blue Baron after his explosive debut in The Heroes Union. Published in the unique Binge Book format, The Blue Baron “Everything Old Is New Again!” #1 is 68 pages in length and will be available for $4.99 at retail.

In a press release Darin Henry said about the project:

“Everything that makes The Heroes Union such a crowd-pleasing, family-friendly superhero epic is back in The Blue Baron and multiplied by a thousand. The body-swap premise makes it a perfect jumping on point for readers of all ages because the reader and the main character are both learning the history and secrets of The Blue Baron simultaneously.”

This release marks The Blue Baron’s Diamond Comics debut, offering readers around the world the chance to dive deeper into their new favorite superhero universe.  The Blue Baron “Everything Old Is New Again!” #1 is a body-swap comedy with superpowers that shows what happens when a 300-year-old hero switches bodies with a 13-year-old zero. For more than two centuries, The Blue Baron has conquered alien invaders, maniacal mutants, and super-powered psychopaths, but now he has to take on his trickiest mission to date…the 8th grade.

Diamond Comics is the distributor for current and future Binge Books, including the previously solicited stories, The Heroes Union #1 and Super ‘Suckers #1. To learn more, please visit www.BingeBooks.fun 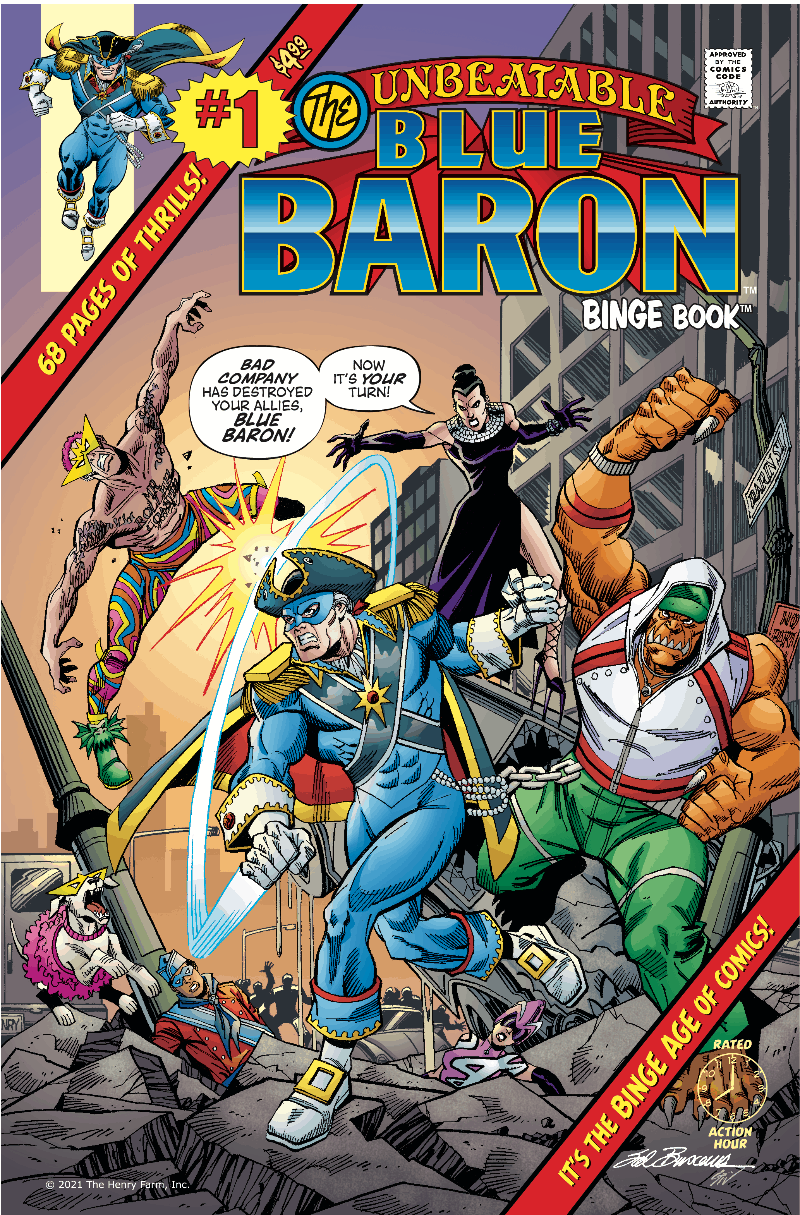 The unbeatable Blue Baron explodes into stores on October 27, 2021

NEWS WATCH: The Legacy of The Heroes Union Continues When Diamond Comics Distributes The BLUE BARON “EVERYTHING OLD IS NEW AGAIN!” #1