CLOAK AND DAGGER ARE BACK TOGETHER as a team of super police consultants! However, TANDY and TYRONE are another story, as each find themselves embroiled in new relationships… Will they finally be able to move on or will the tension of watching their ex with someone new be enough to break their newly reformed team apart? PLUS, something strange is occurring in L.A.’s underground reservoir system and when Tandy goes to investigate she finds herself face to face with an old nemesis! A DOUBLE-SIZED Marvel Digital Original you don’t want to miss! 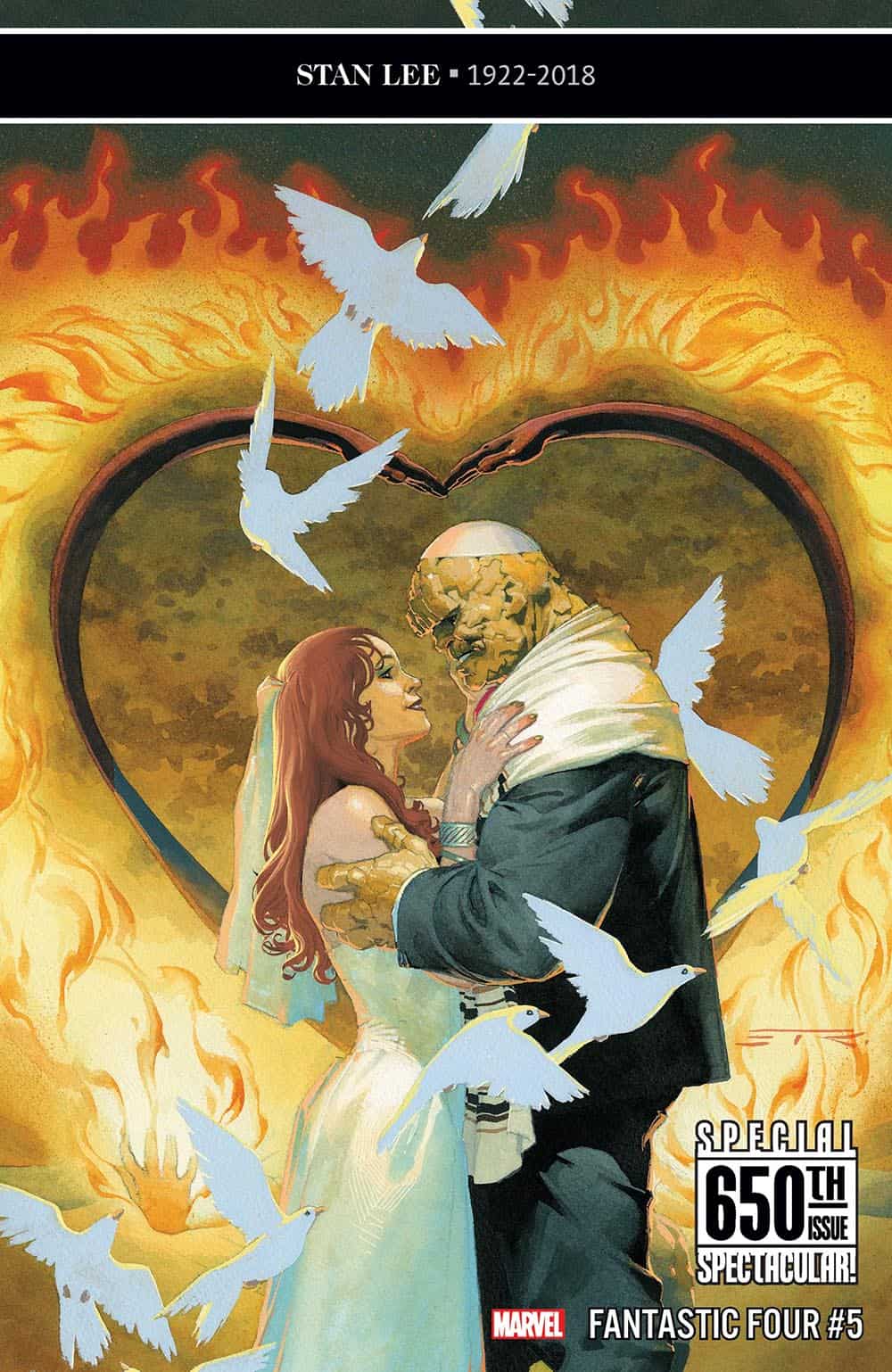 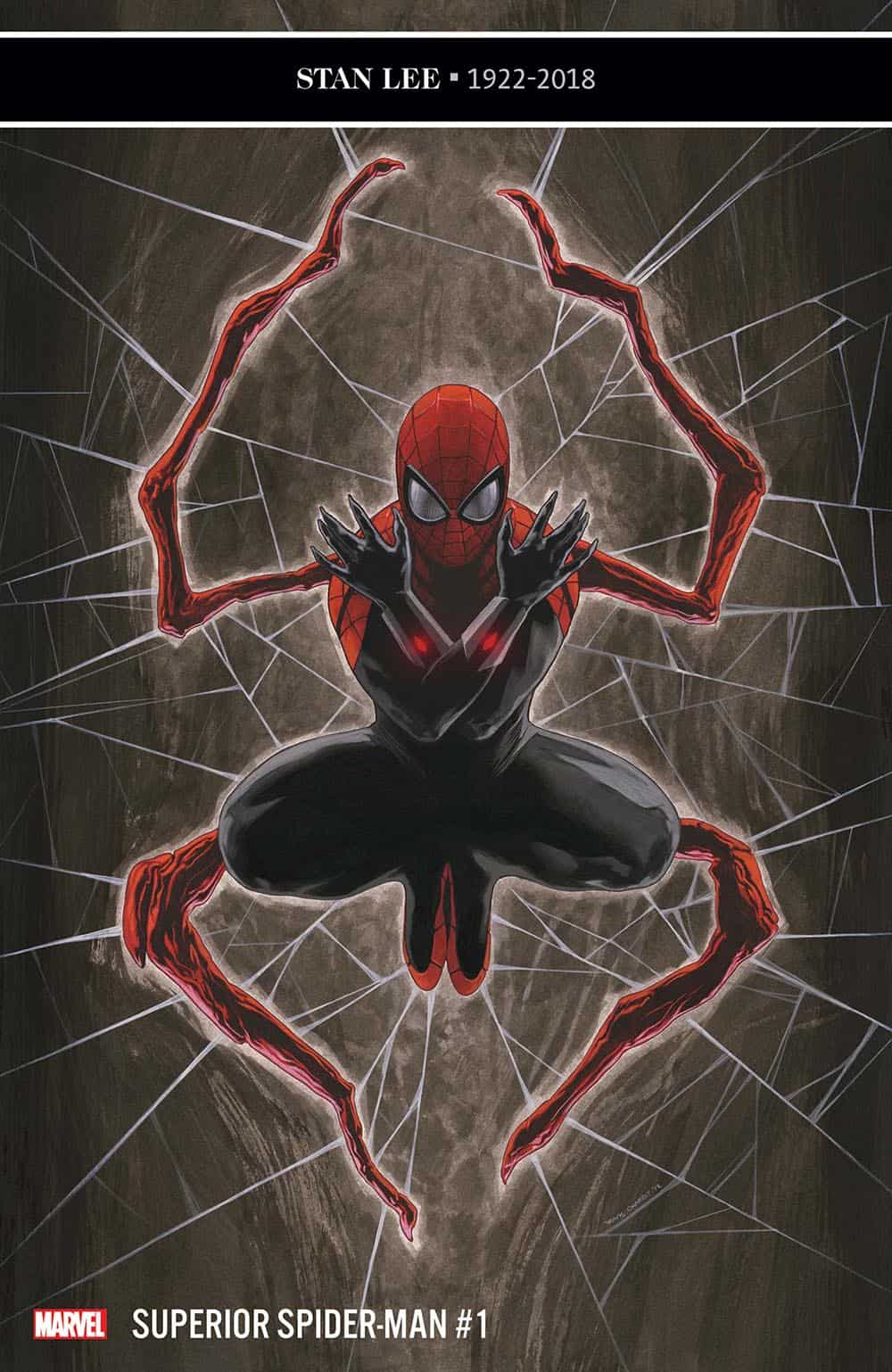 Otto Octavius leaves the moniker of Doctor Octopus behind and once again becomes THE SUPERIOR SPIDER-MAN! If you think you’ve already read the most intense and surprisingly heartbreaking Superior Spider-Man story, prepare to be wrong. Otto is going to prove to the world that he’s the most effective and (to him at least) the best super hero in the world. But when a villain that overpowers him by so much shows up in San Francisco, there’s no way Ock can win, right? Can you see Otto smirking from where you’re reading this?

FROM THE ASHES OF EXTERMINATION! Cable is dead…and now, the original X-Force team of Domino, Cannonball, Shatterstar, Boom Boom and Warpath. must hunt down the murderer of their former leader! The mutant militia are hot for blood…but when their target is the time-traveling younger version of their fallen mentor, is there a line they absolutely cannot cross? And what does Deathlok have to do with all of it? From Ed Brisson (EXTERMINATION, OLD MAN LOGAN) and Dylan Burnett (COSMIC GHOST RIDER), comes an all-new, high-octane mutant adventure! A reckoning will come!

THE WORLD STILL NEEDS HEROES – AND THERE ARE HEROES ALL OVER THE WORLD! The Champions have gone global! The team has seen explosive growth under Ms. Marvel’s leadership, with super-powered members ready to answer the call in a dozen different countries. They’re saving people and improving lives across the planet while they inspire the next generation… but something sinister lurks beneath the surface of their expanded mission. It’s a dark secret that could destroy the team and everything they stand for! Jim Zub (AVENGERS: NO SURRENDER, UNCANNY AVENGERS) and Steven Cummings (Wayward, Legends of the Dark Knight) ignite a new era of CHAMPIONS, filled to the brim with action, adventure and drama in the Mighty Marvel Manner!

What comes AFTER Infinity?

THE EARLY DAYS OF OBI-WAN KENOBI, JEDI KNIGHT! Following the wishes of his master, OBI-WAN has taken on ANAKIN SKYWALKER as an apprentice. Will his mission alongside his young Padawan bring them closer together, or sow the seeds that will drive them apart? And who else is after the ancient holocron that they seek?

Following a string of mysterious deaths in Burns, Alaska, Special Agents Sally Pierce and Tad Marshall arrive to investigate. They soon find there’s more going on than meets the eye… Marvel’s hit scripted podcast, “Wolverine: The Dark Night,” comes to life on the page! Chilling twists and turns, brought to you by the original author of the podcast, Benjamin Percy, and the art talents of Marcio Takara!

ALL THE STARS ALIGN AS KELLY THOMPSON AND CARMEN CARNERO TAKE ON MARVEL’S PREMIER FEMALE SUPER HERO! As Captain Marvel, Carol Danvers has spent months in space protecting Earth from alien threats big and small, but now it’s time for Earth’s mightiest hero to come home. New York City has never looked so good. But every re-entry comes with the unexpected, and Carol is about to hit a whole lot of unexpected. It’s a fresh start and an oversized, star-studded welcome home for a hero who’s been punching the glass ceiling since the 1970s — and just in time for the first female-led film from Marvel Studios! The next 50 years of Captain Marvel starts here! 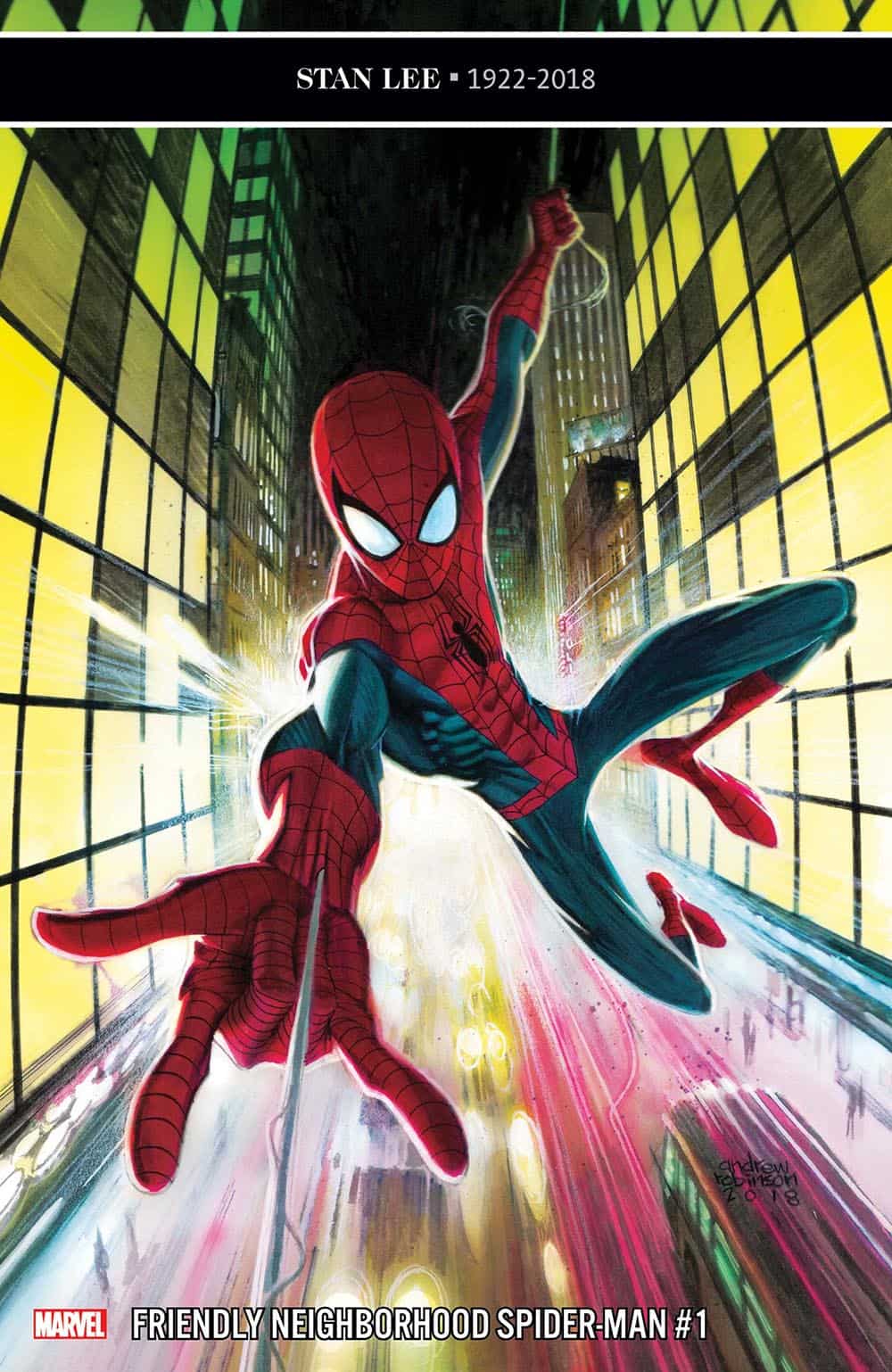 Spider-Man is the worst neighbor EVER! There are always crazy villains and property damage and drama and…and he CATCHES the villains. And he tries to fix the damage and he helps carry your groceries and actually that property damage keeps the rents down. You know what? Spider-Man is the best neighbor ever and this book will give you a closer look at Spider-Man’s (and Peter Parker’s) neighborhood than any book ever. Also, it wouldn’t be a Spider-Man adventure without a threat that could destroy not only Spider-Man, but all his neighbors.

THE MOST FEARED BOUNTY HUNTER IN THE GALAXY! JANGO FETT’S reputation precedes him as joins a crew for what seems like a simple job. Wait, is that a KID with him?! Will his fellow bounty hunters be foolish enough to betray Jango and his son, BOBA FETT?

From the illustrator of the blockbuster series of the summer comes the next epic installment in the WEB OF VENOM — a journey from the symbiote’s perspective through Eddie’s old haunts in San Francisco. It might not like what it finds…

ASGARDIANS OF THE GALAXY #5

…AND HELL FOLLOWED WITH HER. Natasha Romanoff was trained to kill. For years now she’s tried to overcome that programming, to side with the angels…to be a hero. And where’d that get her? Killed. By one of the few true friends she allowed herself to have. Now she’s back from the dead, angry as hell and finding those better angels harder and harder to hear. Jen and Sylvia Soska — the Twisted Twins of horror — join rising artist Flaviano to weave a web of vice, violence and vengeance that will net Natasha the biggest bad men she’s ever faced…or put her back in the ground for good. 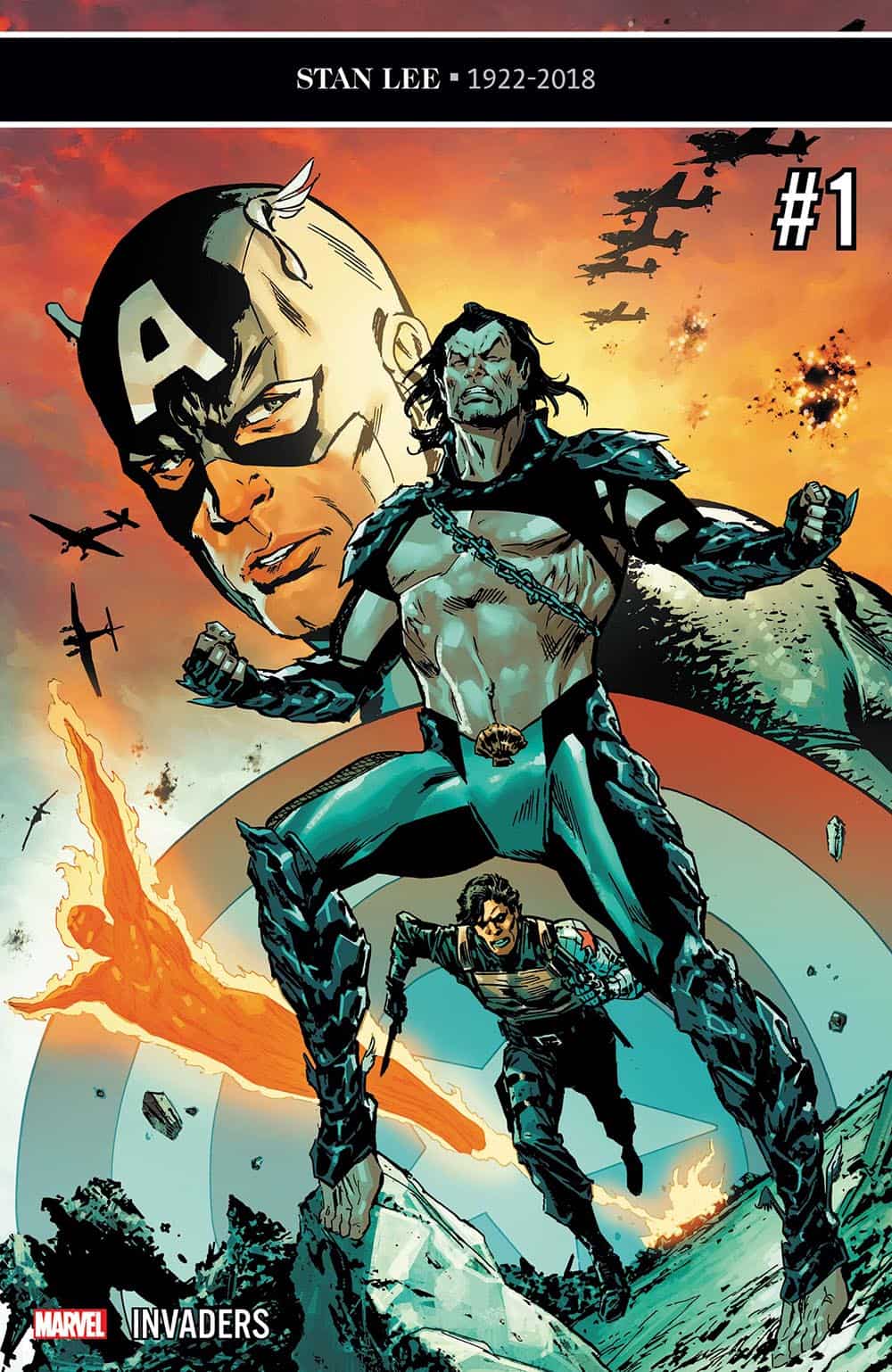 THE GREATEST GENERATION OF MARVEL HEROES IS BACK – TO STOP ONE OF THEIR OWN! In commemoration of Marvel’s 80th anniversary and springing from events in the pages of AVENGERS and THE BEST DEFENSE, the Marvel Universe’s first super-team is back! CAPTAIN AMERICA. THE HUMAN TORCH. THE WINTER SOLDIER. NAMOR. They fought in WORLD WAR II together as THE INVADERS. But now NAMOR is the enemy, a global threat more powerful than ever. His deadly plans are as deep and far-reaching as the ocean and REVELATIONS about his past could THREATEN the MARVEL UNIVERSE! It’s up to his old teammates to stop him, but what chance do they have against the man who knows their every move? ”War Ghost” begins here! 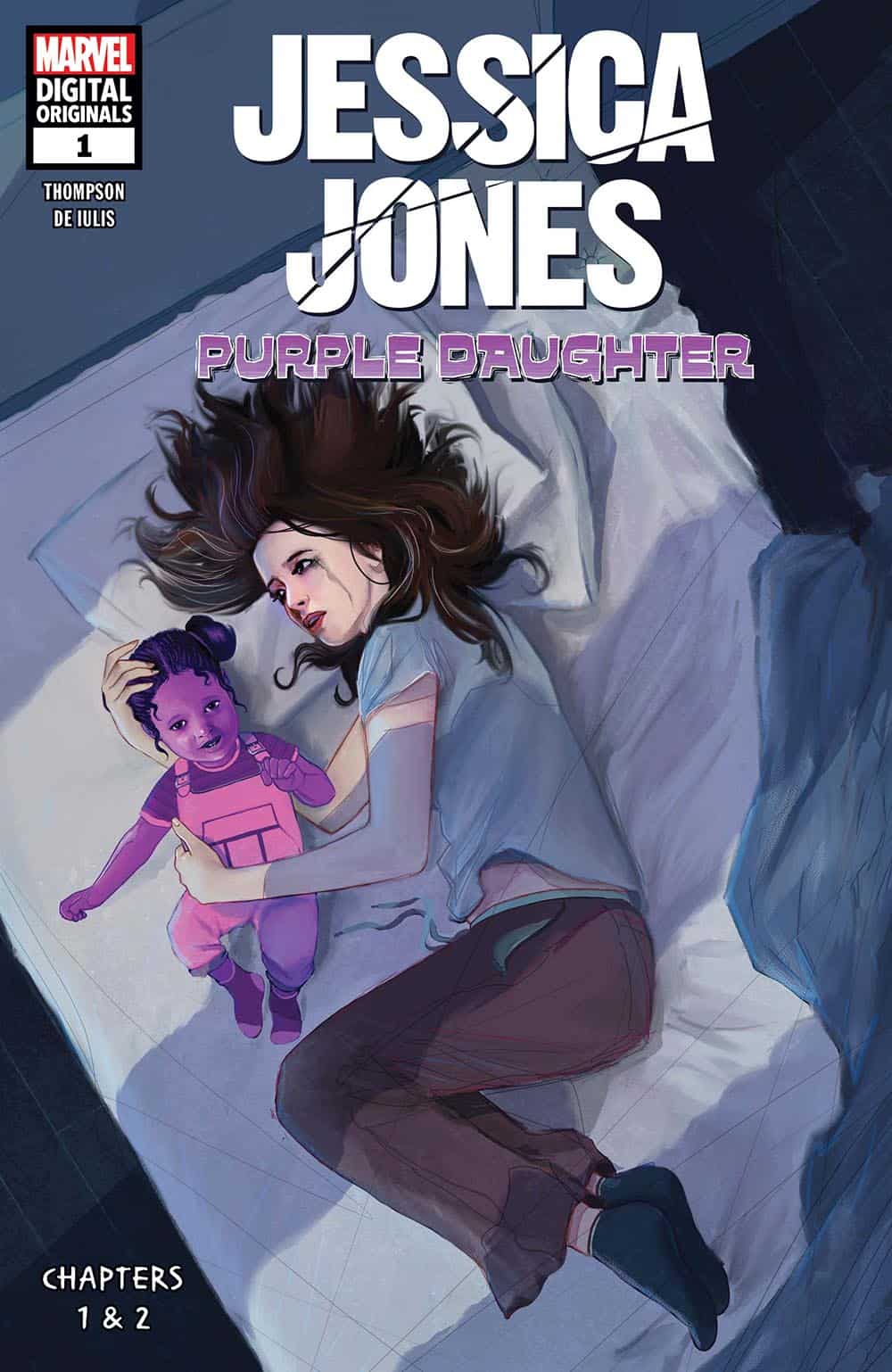 PURPLE DAUGHTER STARTS HERE! When her daughter comes home with purple skin, Jessica Jones is forced to question everything she thought she knew about her time with the Purple Man and her marriage to Luke Cage. As Jessica digs deeper than ever before into the darkness at the center of her life, will she find relief, or just another nightmare? The critically-acclaimed team that brought you JESSICA JONES: BLINDSPOT returns with another thrilling, chilling digital-first tale that will challenge everything you think you know about Marvel’s top P.I.! A DOUBLE-SIZED Marvel Digital Original you don’t want to miss! 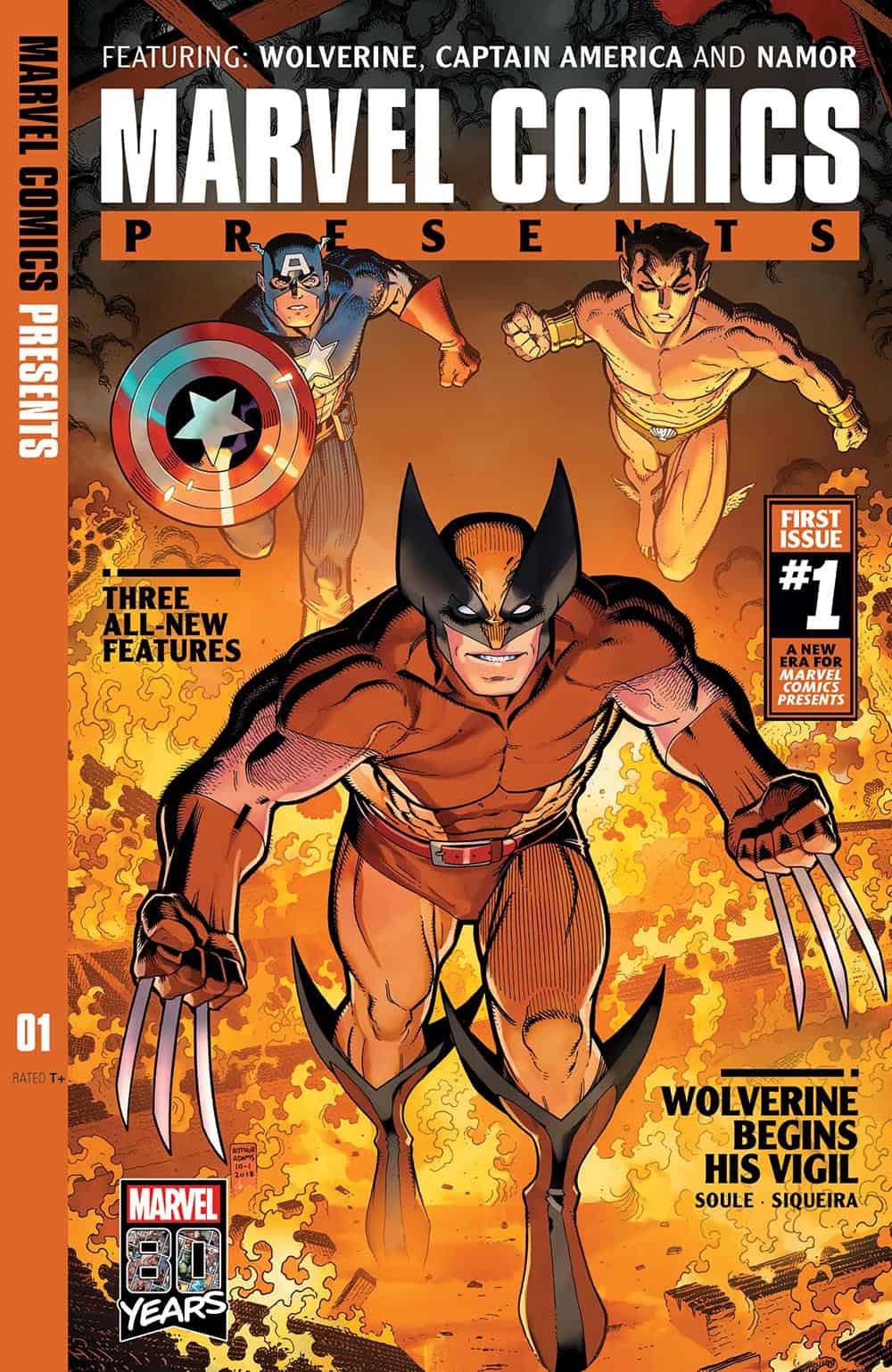 THE CLASSIC MARVEL SERIES RETURNS FOR MARVEL’S 80th ANNIVERSARY! Three titanic tales celebrating the first decade of Marvel stories! First — an all-new tale of the man they call the Wolverine begins in the 1940s! Then comes Captain America, the first Avenger of World War II still fighting for freedom today! And finally, the untold tale of Namor and the atom bomb! 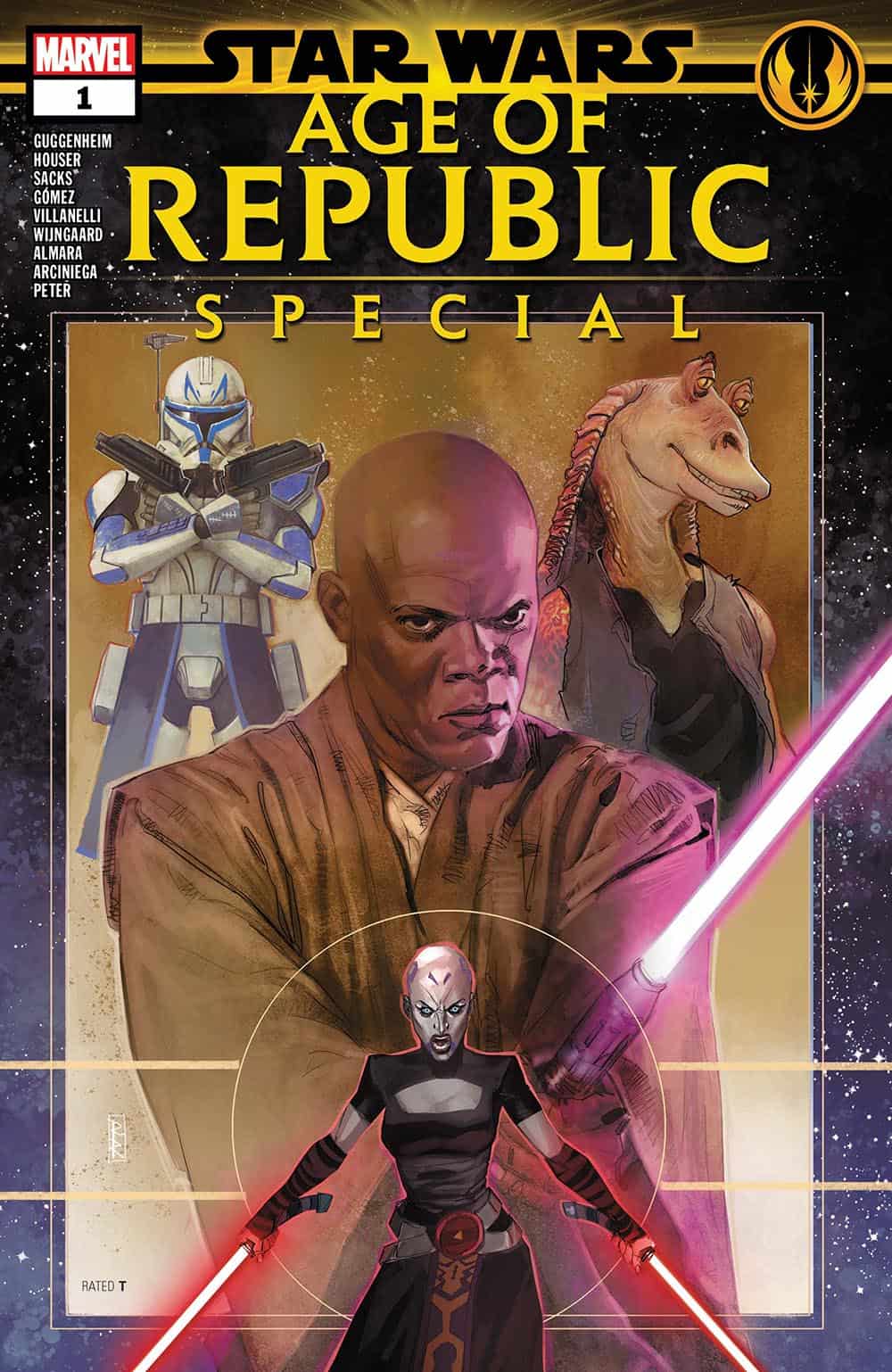 THE GREATEST HEROES OF THE REPUBLIC, THE DEADLIEST VILLAINS – AND EVERYONE IN BETWEEN! THREE CREATIVE TEAMS! THREE STORIES FEATURING YOUR FAVORITE STAR WARS CHARACTERS! The baddest Jedi in the galaxy has a score to settle — MACE WINDU returns in an action-packed adventure from OLD MAN HAWKEYE’S Ethan Sacks! You can run, but can you hide from the twin lightsabers of Sith assassin ASAJJ VENTRESS? Feel her fury in a tale expertly woven by veteran STAR WARS comic scribe Jody Houser (THRAWN, THE AMAZING SPIDER-MAN: RENEW YOUR VOWS). You can take the clone out of the war but you can never take the war out of the clone — CAPTAIN REX dusts off his blaster and enters the fray in a story by X-MEN: GOLD author Marc Guggenheim.

ALL-NEW HORROR STORY! For Marvel’s 80th Anniversary we’ve gone into the vaults to bring back some classic titles from the Marvel of yesteryear…but maybe some vaults should stay closed! Something terrifying has broken free and crawled forth from one of the most terrifying corners of Marvel-dom, the CRYPT OF SHADOWS! Prepare for terror! The shadows are deeper than you think, and horrors lurk within…

GUARDIANS OF THE GALAXY #1 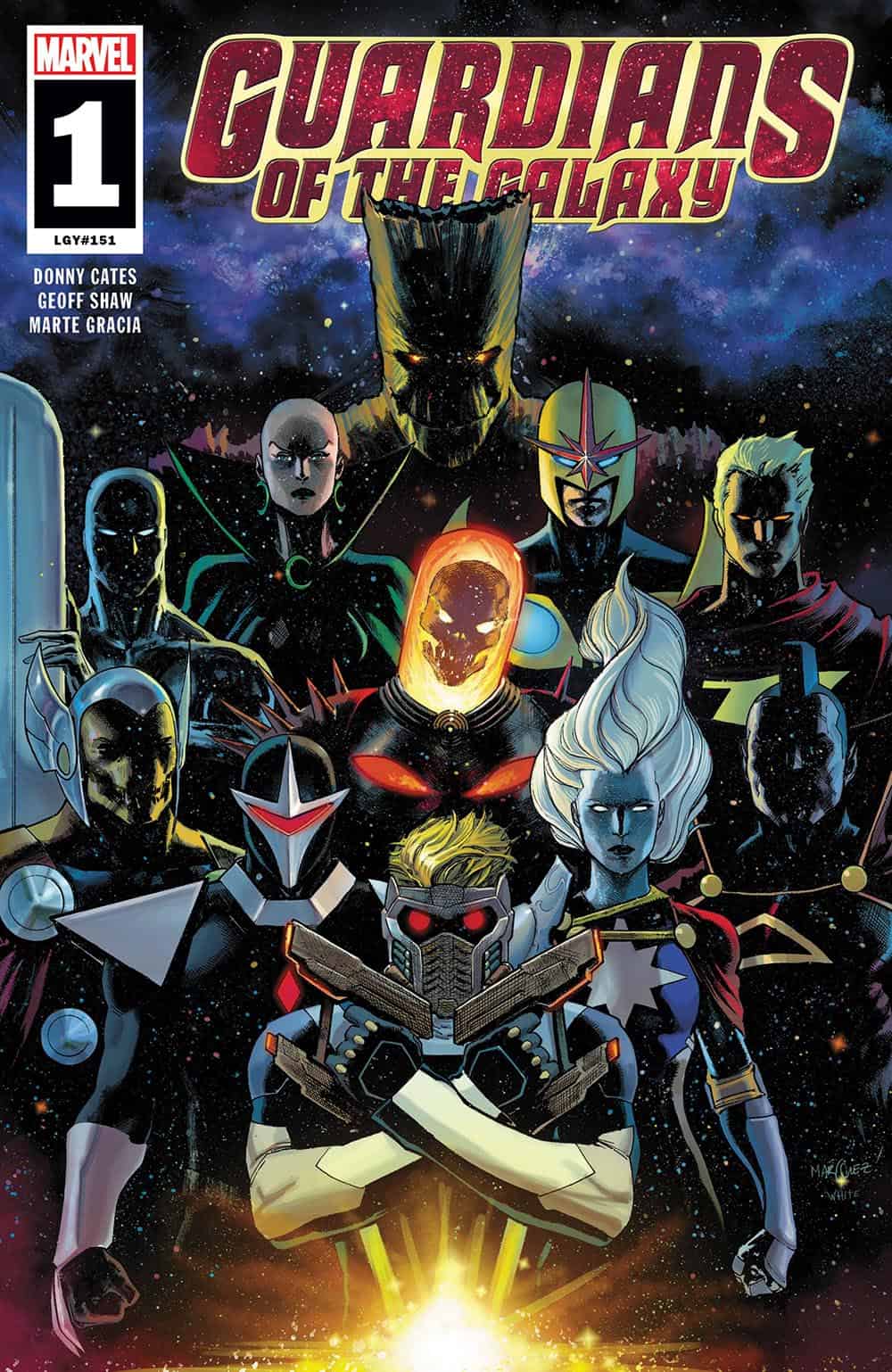 WHO WILL STAND? The universe is on fire. Hundreds of worlds are at war. Never has there been such hatred and division across the cosmos. And in spite of all this, Thanos of Titan is still dead…or is he? Now, more than ever, the cosmos need the Guardians of the Galaxy…but in the aftermath of the Infinity Wars, who is left to answer the call? Featuring every cosmic super hero in the known universe by the THANOS WINS creative team of Donny Cates and Geoff Shaw!

ALL-NEW WAR STORY! In honor of Marvel’s 80th Anniversary and history with War Comics comes a brand new edition of WAR IS HELL with two fascinating and soul-crushing tales of War. “In the Mood” by Howard Chaykin takes you to the skies as the Luftwaffe and RAF battle over the English Channel for a battle tale of bitter irony and “War Glammer” by Phillip Kennedy Johnson brings you back to Earth in modern day Afghanistan with a story that will chill you to the bone.

Marvel Unlimited members have access to some of the greatest Marvel Comics featuring The Avengers, Spider-Man, Thor, Black Panther, Captain Marvel and more! With July’s update, Marvel Unlimited will also be expanding its back catalog with the following issues: SPECTACULAR SPIDER-HAM (1985) #6-17, SPIDER-MAN (1990) #64-75, ADVENTURES OF THE X-MEN (1996) #1-6, SGT. FURY AND HIS HOWLING COMMANDOS (1963) #24-43, and much more! This amazing service is accessible through Marvel Unlimited on the web and through the Marvel Unlimited app on iPhone®, iPad® and on select Android™ devices.

New to comics, and don’t know where to start? Don’t worry! Marvel Unlimited features a curated READING LIST section to help you uncover pathways into the Marvel Universe through events, themed lists, and recommended series featuring your favorite characters and creators!

With classic and newer issues added to Marvel Unlimited on a weekly basis as early as six months after they’re in stores, you’ll definitely want to join this curated experience that lets you find new favorites to read anytime, anywhere, from the full range of Marvel’s history.