SOMNUS is the mysterious character whose backstory will be told in MARVEL’S VOICES: PRIDE #1 by critically acclaimed writer Steve Orlando (Wonder Woman, Curse of the Man-Thing) and, Eisner-nominated artist Claudia Aguirre (Hotel Dare), who will make her Marvel Comics debut.

Somnus, a mutant who possesses the ability to be in total control of people’s dreams, has already made an impact on an X-Man long ago and is now given a second chance at life and the chance to follow his own, and he’s determined to make the most out of it as part of thriving mutant nation of Krakoa!

In a press release from Marvel Comics, writer Steve Orlando had this to say about his latest project:

“Somnus, Carl Valentino, is inspired not only by my own family history, but by my experiences with past generations of LGBTQ+ folks from across the country, people I wouldn’t have met without comics. While there is still plenty of work to do, we’ve also come a long way as a community. Somnus is a chance to explore how my own late queer relatives may have felt, living in more prejudiced times. He’s also a chance to celebrate past generations as a whole and acknowledge the strides we’ve made that they may not have lived to see. And with the Krakoan era being one of relative utopia for mutantkind, Somnus will bring a fresh perspective, and respectful gut check, to the young mutants of the present who may not know just how hard some had to fight for all mutants have achieved. Within the story and without, Somnus will be a new, complex character carrying a message of respect, power, and vision.”

In the same press release, artist Luciano Vecchio, who designed Somnus’ mesmerizing costume, said about Somnus and his chance to step up in a big way and become the hero he was always destined to be:

“Marvel’s Voices: Pride is ticking so many dream assignments for me! On top of doing the cover, a frame variant, and a story that I got to write myself, I also got to design a new queer character introduced in a story written by Steve Orlando. I’m so happy to finally collaborate officially with Steve, and I fell in love with Somnus’ concept and backstory right away. I got some input from him and editor Sarah Brunstad but also a lot of liberty to propose ideas. This time the design process itself felt almost like channeling. I wanted him to have an air of ‘man of your dreams,’ very charming and human but unreachable at the same time. Some visual elements are a mix of Mod fashion, a bit of Hellfire Gala influence, and a palette based on Etruscan vase art as a nod to the god he’s named after.”

Somnus will also be the star of Luciano Vecchio’s celebratory MARVEL’S VOICES: PRIDE #1 Frame Variant cover! An homage to the iconic Marvel 25th Anniversary covers released in 1985, Somnus takes the spotlight surrounded by some of Marvel’s brightest LGBTQ+ heroes. 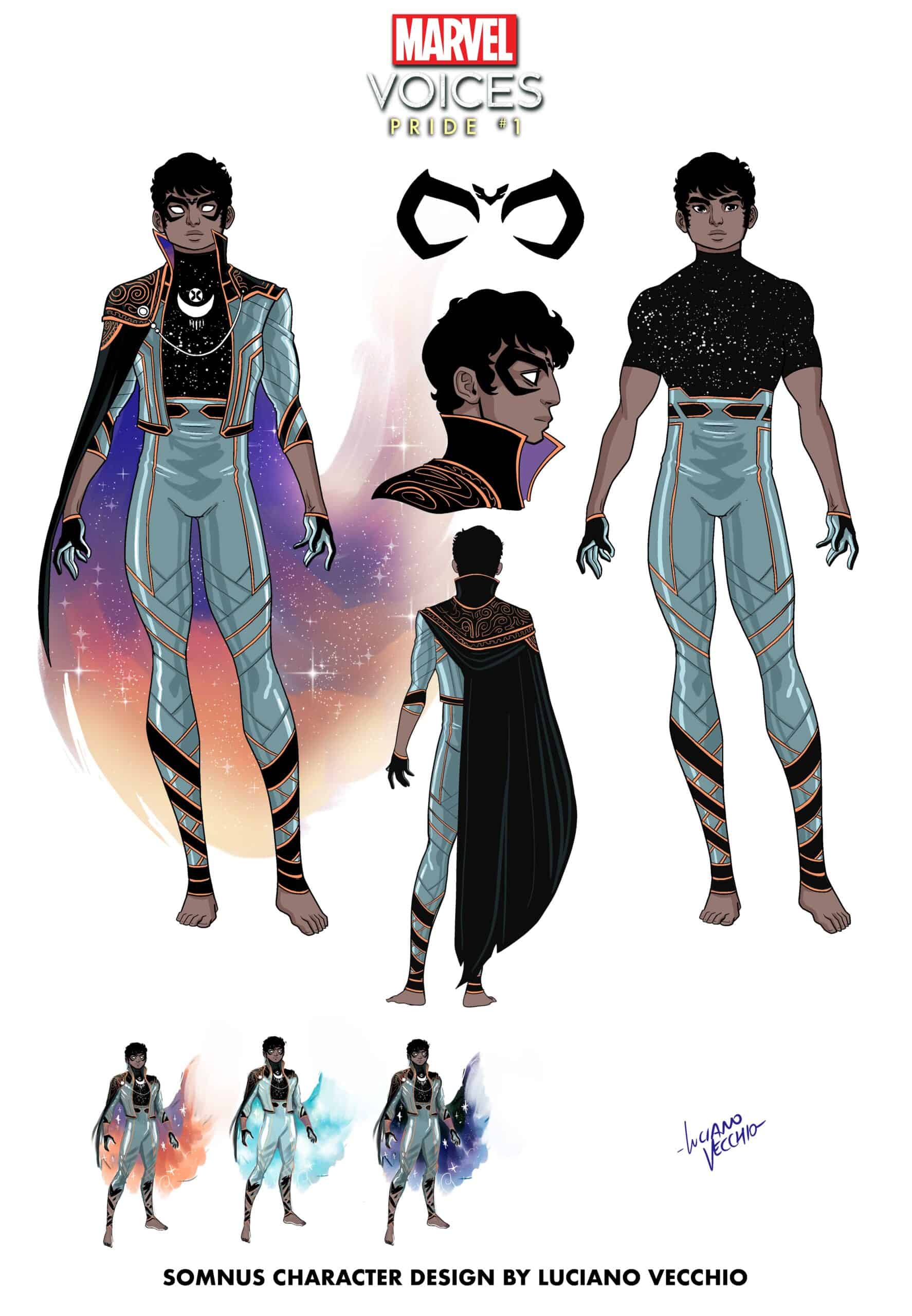 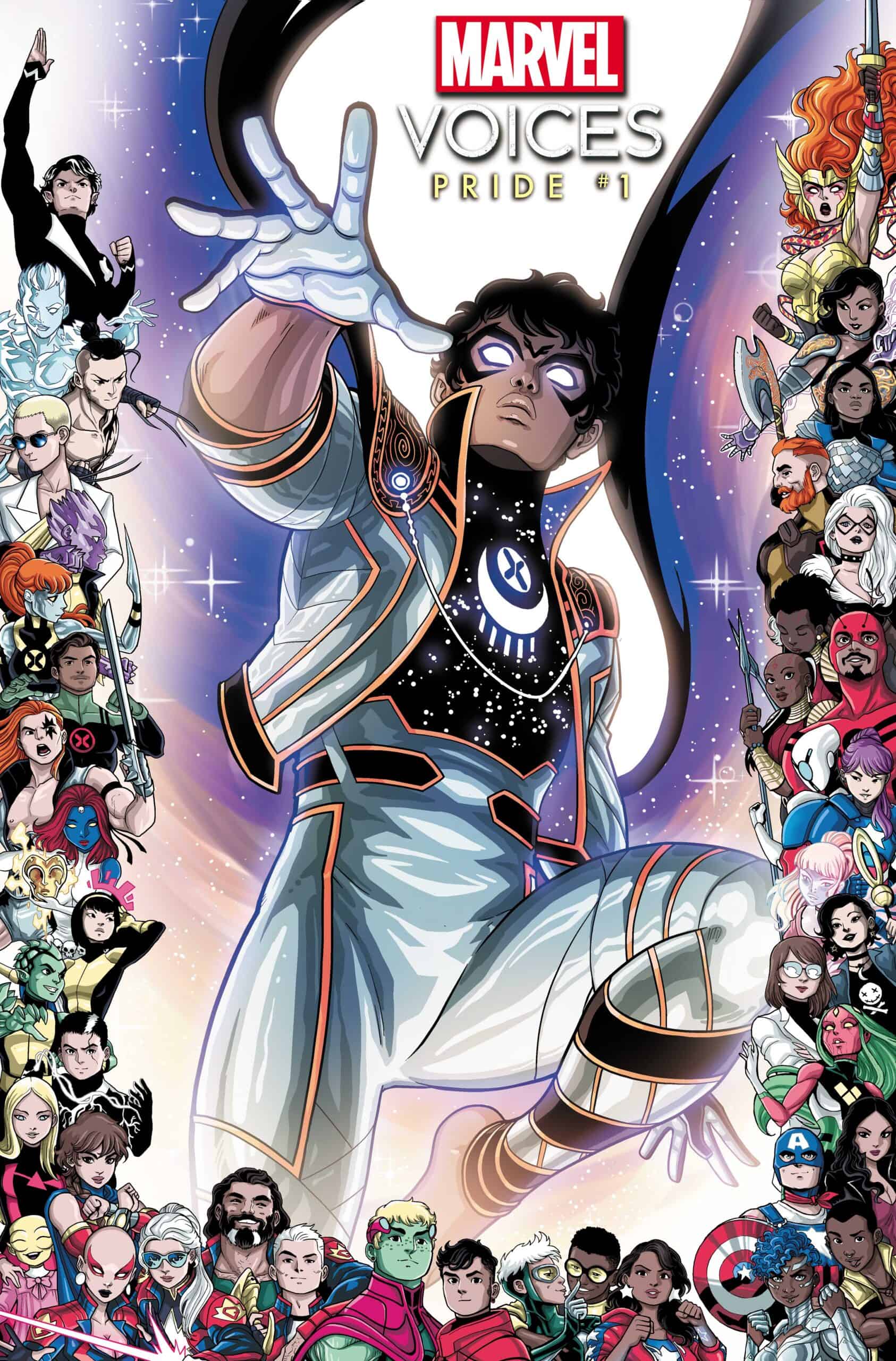