This summer, fans discovered the whereabouts of Marvel Comics’ most legendary artifacts in INFINITE DESTINIES! Unfolding over a series of epic annuals, this unpredictable story saw heroes from all corners of the Marvel Universe on a chase to prevent the powerful Infinity Stones from falling into the wrong hands. Central to the action was Marvel’s iconic thief Black Cat who walked away as the new wielder of this great cosmic power. The events of this story spun out into INFINITY SCORE, the current arc in her hit ongoing series. Now, fans will witness the stunning conclusion to this grand saga in GIANT-SIZE BLACK CAT: INFINITY SCORE. Written by BLACK CAT writer Jed MacKay with art by C.F. Villa, this oversized special will be a character-redefining one-shot with huge repercussions for the future of the Marvel Universe…

Black Cat has brought half of the Infinity Stones together, collecting a level of power that hasn’t been seen in years! But to what end? This hasn’t taken her out of the crosshairs of Nick Fury OR Nighthawk, and with the Infinity Stones involved, can Thanos be far behind?!

Here’s what MacKay had to say about bringing his Black Cat saga to its finale:

It’s a powerful phrase. Sometimes that’s how crime stories start, and sometimes that’s how they end. In this case, it’s the latter. But never fear, we’re sending Felicia and her crew off in style with GIANT-SIZE BLACK CAT #1, the 30-page finale to the INFINITY SCORE, where we see Felicia pull off the final hair-raising heist of her series, where the risks are high and the stakes are even higher. Juggling the job, the various cosmically powered misfits she’s collected, the shady movers who are after the stones and their hosts for their own reasons, and her own personal problems, Felicia’s putting it all on the line for the greatest payoff she can imagine. And when the smoke clears, will the Black Cat have landed on her feet, or will she land herself in jail– or a grave? Find out in GIANT-SIZE BLACK CAT #1 this November!

“BLACK CAT has been a gift. In the two-and-a-half years or so since we started this book, Felicia Hardy went from a character that I was passingly familiar with to my favourite, and in the course of that time I’ve been privileged enough to work with some of the best artists, colorists, and letterers in the business. For a book we weren’t sure was going to make it past #5, we’ll have wrapped up 25 issues in total and have taken Felicia all across the Marvel Universe and back. It’s a book I’m going to miss dearly, but we’ve shown the world that the Black Cat can hang with anyone and deserves her seat at the table!” 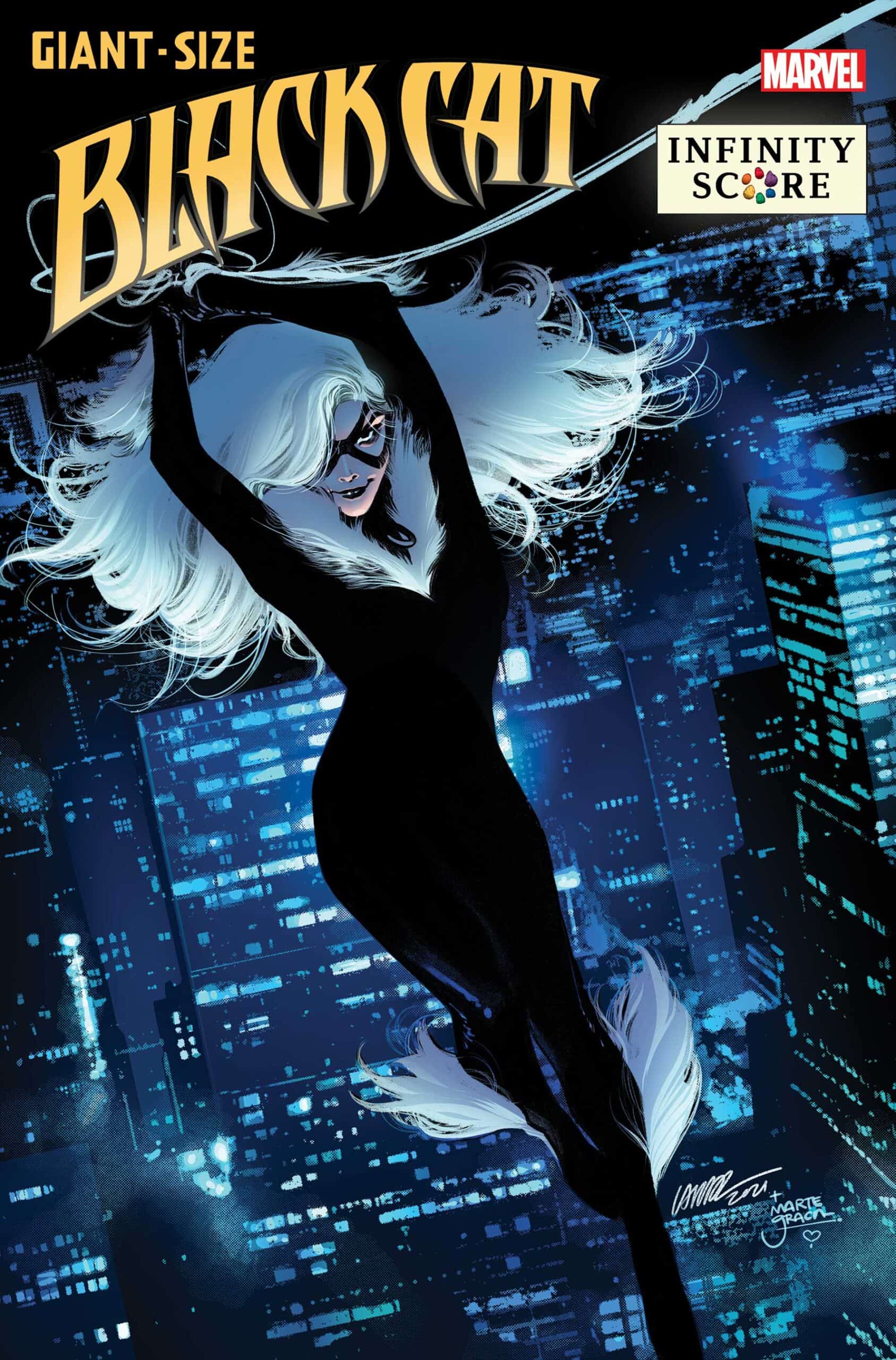 Did Black Cat get lucky or did her luck just run out? Find out in the startling climax to INFINITE DESTINIES when GIANT-SIZE BLACK CAT: INFINITY SCORE #1 hits stands in November! For more information, visit Marvel.com.