Following his 20-issue run on I HATE FAIRYLAND at Image Comics, acclaimed Eisner-winning cartoonist Skottie Young is opening the borders of his whimsical fantasy universe for new writers and artists to wreak havoc. Fábio Moon and Gabriel Bá, the acclaimed fraternal artists behind The Umbrella Academy and the creative team of Daytripper and Two Brothers, join a line of creators with their new contribution, “I Hate Gert!”—a six-page descent into madness exploring some of the mythos’ most quirky foes.

This chapter headlines just one of many guest-created comics in a new monthly series called The Unbelievable, Unfortunately Mostly Unreadable and Nearly Unpublishable Untold Tales of I Hate Fairyland—debuting exclusively for free on Young’s Substack Newsletter, Stupid Fresh Mess. These mini-comics pave the road to Young’s relaunch of I HATE FAIRYLAND at Image Comics, debuting with a new first issue in July written by Young with art from Brett Parson.

These stories further explore the comically inept, bloody journey of Gert—a young girl sucked into a world of eccentric fairy tale conventions building on the legacies of L. Frank Baum, C.S. Lewis, Lewis Carroll, and beyond. Upon failing to reach home over more than two decades, Gert (stuck in her 6-year-old body) wages a one-“child” war on her new home with a very, very large axe, aided by her exhausted bug guide, Larry.

In a press release Young explained the inspirations for the project:

“After a few years away from Gert and the gang, I was starting to miss the energy of I HATE FAIRYLAND and the stories I could tell only in that universe. I thought it was time to bring it back, but not only continue Gert’s ongoing saga, but also introduce short stories that fill in the many gaps in all the years she’s been in Fairyland. So I decided to reach out to some of my awesome cartoonist pals and invite them to join in on the fun.”

“Reading I HATE FAIRYLAND, I felt like the kid who grew up reading Sergio Aragonés’ Groo and MAD Magazine‘s ‘Spy vs. Spy’ all over again. Gert is just the perfect character to surprise the reader with absurd stories, and the ever-growing cast of supporting characters inspired us to imagine a story in this universe.”

“There was something about the ‘everything goes’ fantasy setting of the story that we felt we could explore creatively in our work in ways that we usually can’t,” Bá continues. “We could swap roles and combine roles while doing this—ink each other’s pencils, or color each other’s pages, have fun while doing it, and create a story that’s the fusion of both our visual styles and different from everything we’ve done before.”

When asked about working with Moon and Bá , Young commented:

“Fabio and Gabriel are two of my favorite people on the planet, outside of their insane amount of talent. Now, not only do I get to call them friends, but collaborators. It really is surreal to think these two geniuses jumped into my I HATE FAIRYLAND sandbox and started causing havoc. I’m the luckiest cartoonist in the world.” 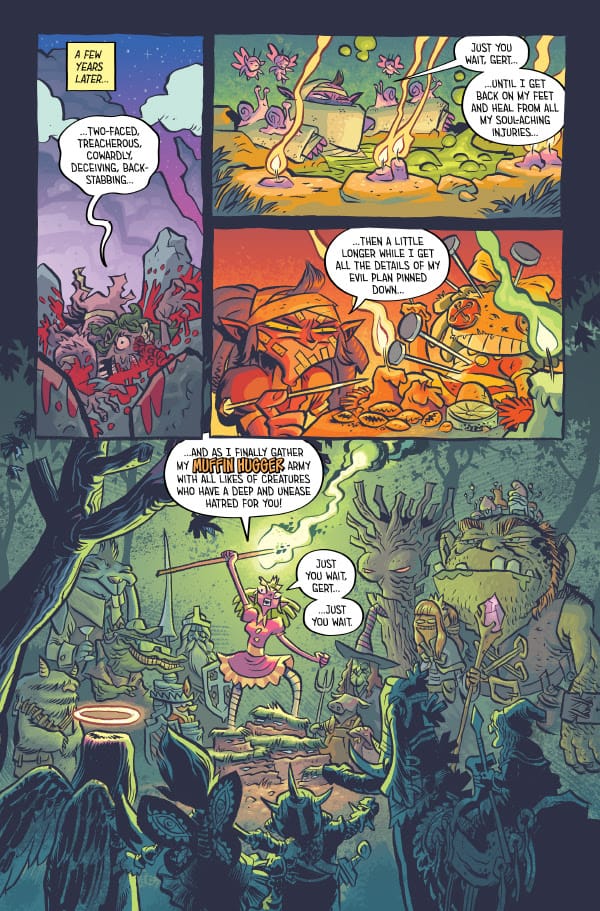 The Unbelievable, Unfortunately Mostly Unreadable and Nearly Unpublishable Untold Tales of I Hate Fairyland, “I Hate Gert“will be available on the Stupid Fresh Mess Substack Newsletter on 12/9.