NEWS WATCH: The Year of Valiant Begins in 2022

Valiant is back for another year of the thrills, action, and creativity that we know them for! 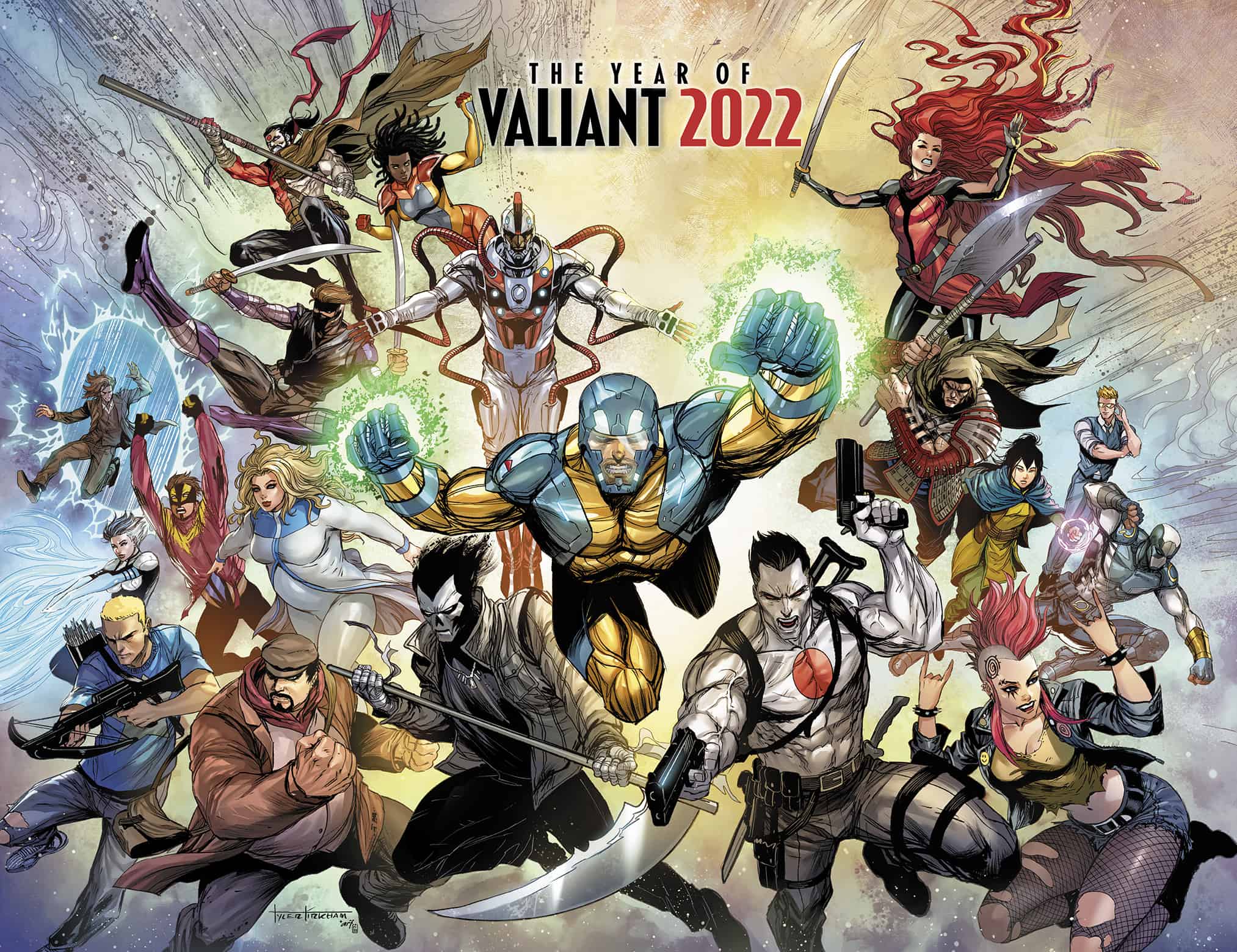 The Valiant Universe is about to expand. THE YEAR OF VALIANT will be a year-long celebration of Valiant throughout 2022, consisting of new launches with new creators, the return of fan-favorite characters, the formation of new teams, and the Valiant characters exploring beyond traditional publishing methods. To celebrate the announcement, Valiant Entertainment is incredibly proud to showcase its universe with exciting new artwork from acclaimed creators Tyler Kirkham and Arif Prianto.

“So much is happening in Valiant’s 2022 to bring our Universe forward with the return of characters that fans continue to anticipate and love,” said Valiant Entertainment Publisher Fred Pierce. “There will be sci-fi, horror, comedy, and so much action that it will be hard to sit down as they’re being read. In addition to publishing, be on the lookout for games based on our characters, like Shadowman Remastered, original graphic novels, prose novels, and perhaps items of a more cinematic nature from our great parent company DMG Entertainment. The Valiant family is happy for everyone to join the excitement.”

THE YEAR OF VALIANT will kick off with the return of the critically-acclaimed series SHADOWMAN in January. The first chapter of ‘Deadside War’, an epic horror storyline that will see the return of PUNK MAMBO and other familiar faces from the Valiant Universe, will begin in SHADOWMAN #5 on January 19th from the master of horror Cullen Bunn, rising star artist Pedro Andreo, and Eisner-nominated creators Jordie Bellaire and Clayton Cowles.

“In the new ‘Deadside War’ story in SHADOWMAN, we’re seeing Blights—tears in the fabric of reality between our world and the Deadside — opening with increased frequency and increased supernatural mayhem,” teased Cullen. “Shadowman is tasked with protecting our world, but he’s no longer sure that throwing punches and swinging scythes is the way to combat the Deadside’s ultimate plans. Plans? How can a place have plans? The answer to that question will lead Shadowman to gather allies such as Punk Mambo to his side. It will also awaken some old adversaries who might be too much even for the combined might of our heroes. All this brings us to the titular war, which could rip the entirety of the Valiant Universe apart.”

More announcements about new launches from THE YEAR OF VALIANT will arrive in the coming months. In the meantime, here is what the Valiant staff have to say about the year-long celebration of the Valiant Universe. 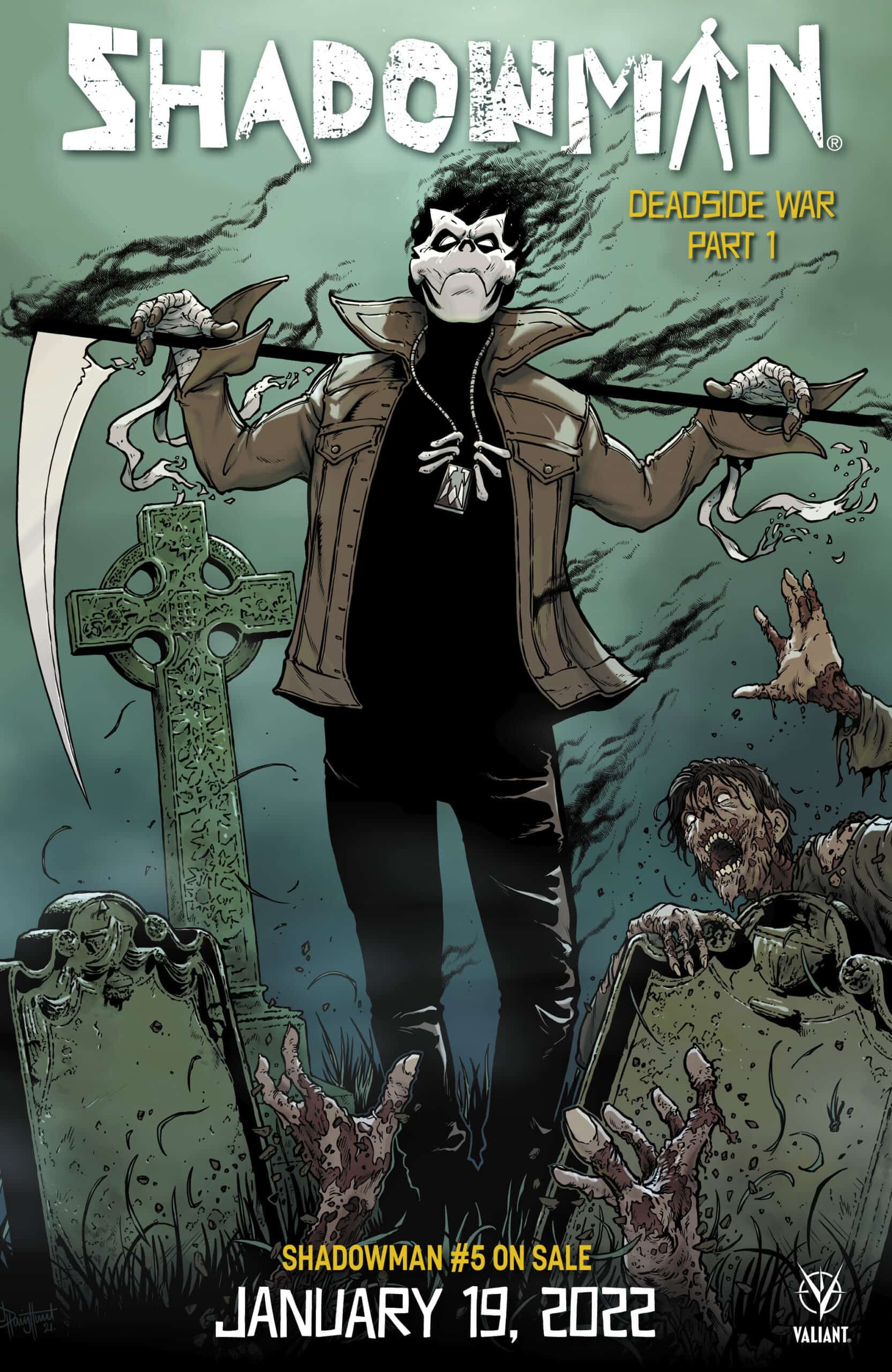 “2022 marks the start of Valiant Entertainment’s second decade since publishing resumed in 2012, and one of the reasons I joined the company this past summer is because I think we’re only just getting started. We’re building on the incredible legacy of both the original ’90s comics and the 2012 reboot, stellar characters who encompass so many different types of stories, and the tightest and most accessible shared universe in comics, and we’re bringing in new creators, characters, concepts, and titles — and of course the return of fan-favorites who have been out of the spotlight lately. This year is really the start of everything we want to do with the universe in comics and beyond, and we’ve only scratched the surface of what’s possible. I’m thrilled to be part of such an incredible team and organization, and thankful for the opportunity to help tell amazing stories with some of the best talent in comics.”

“The year starts off with the return of Punk Mambo in SHADOWMAN, Faith in THE HARBINGER, and [CLASSIFIED] to the pages of the Valiant Universe and that’s just the start! Full-on hero time comes next, coupled with mind-blowing sci-fi, bone-chilling horror, and laugh-out-loud humor. Valiant has something to offer for everyone and 2022 is the year where there is no better place and time to rediscover, or just plain discover what the Valiant Universe is all about.”

“The Year of Valiant is all about making Valiant fans proud while offering the perfect opportunity to welcome new readers to one of the most compelling shared universes in comics. With every new comic, I believe readers will be able to see it’s always a passion project for the creative team as they respect the rich history of these iconic characters and fully embrace what makes them unique. I’m proud of the road ahead for Valiant and I do hope you’ll join us for the adventure.”

“There really has never been a more perfect time to show just how much we love the characters and the universe they live in by delivering on the highest quality storytelling in comics and so much more. At its core, The Year of Valiant is all about you, the passionate and dedicated fan community. With a remarkable lineup of titles featuring flagship and fan-favorite characters, the iconic shared Valiant Universe will truly stand out as the place to be for any fan, and we are only just beginning to reveal all of the awesome surprises in store for 2022. I honestly couldn’t be more hyped for the opportunity to be a part of such a special time for Valiant.”

NEWS WATCH: The Year of Valiant Begins in 2022