Valiant Entertainment is proud to reveal an all-new way to explore the Valiant Universe with the very first Kickstarter tabletop game Valiant: FIGHT for DEADSIDE.

MASTER DARQUE has assembled his army in Deadside. Only our heroes of the Valiant Universe stand a chance at stopping him from unleashing his horrors and destroying the world, but they need your help!

Valiant: FIGHT for DEADSIDE is a co-operative 1-4 player tabletop game coming soon to Kickstarter from designers Sen-Foong Lim (The Shining: Escape From The Overlook Hotel, Legend Of Korra: Pro-Bending Arena) Jon Cohn (Ghostbusters: Blackout, Munchkin: TMNT, Grindhouse) and plays in 45-60 minutes. Featuring flagship and fan-favorite characters of the Valiant Universe such as SHADOWMAN, NINJAK, PUNK MAMBO, DR. MIRAGE, and more, it’s up to these heroes of Deadside to take on MASTER DARQUE’s army and stop them from invading our world.

The first 500 subscribers to the official Valiant Kickstarter newsletter will gain free access to an exclusive day one offer when the Kickstarter campaign goes live, giving fans a first look at digital content delving into the story behind the FIGHT for DEADSIDE! So sign up now HERE and stay up to date on all the latest announcements for the first kickstarter tabletop game directly from Valiant Entertainment! 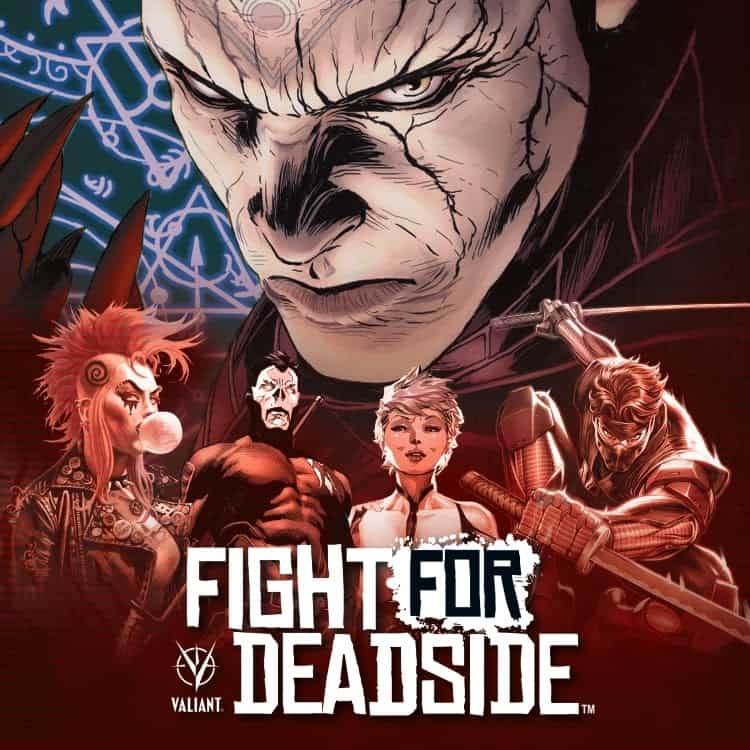 “I’ve been a big fan of comics my entire life, and what caught my attention about Valiant were the supernatural titles like Shadowman and Dr. Mirage,” said designer Sen-Foong Lim. “Working on a game where some of the coolest Valiant characters team up to prevent Master Darque’s plans from coming to fruition has been awesome! It’s been great to dive headfirst into the lore and make a game out of all the interesting things Valiant has stuck in the Deadside.”

“I’m incredibly excited to be working within the Valiant Universe to bring this experience to gamers everywhere,” said designer Jon Cohn. “For the first time, we get to jump into the shoes of our favorite Valiant heroes and tell our own story in Deadside, waging war with Master Darque himself.”

Choose your heroes to stand against MASTER DARQUE’s forces and join the FIGHT for DEADSIDE!

As the first Kickstarter tabletop game for Valiant Entertainment, Valiant: FIGHT for DEADSIDE offers the opportunity for a brand new way to jump into the iconic shared universe for longtime fans and newcomers alike with a thrilling and fast-paced tabletop gaming experience.

Be sure to sign up for the official Valiant Kickstarter newsletter HERE and stay tuned for more updates on the upcoming Valiant: FIGHT for DEADSIDE Kickstarter campaign launch date, exciting add-ons and so much more.

And, as always, Stay Valiant!