WarnerMedia Kids & Family Loads Up the Laughs and Adventures for Another Action-Packed Year with Cartoon Network’s Teen Titans Go! 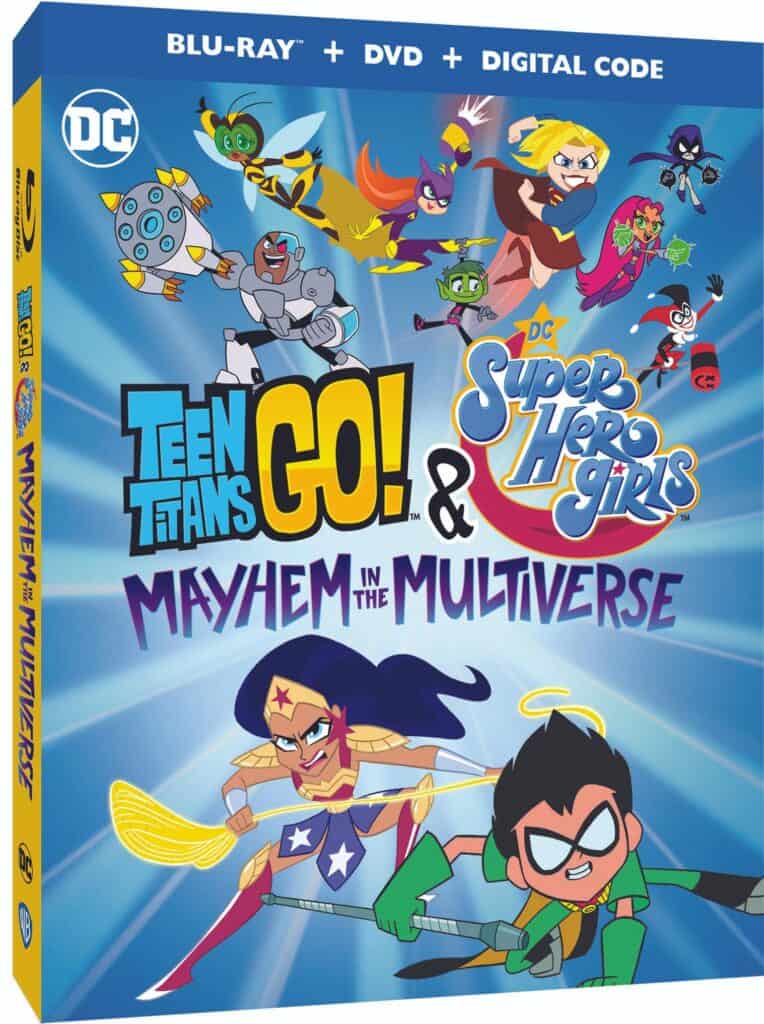 Digital, Blu-Ray™, and DVD from Warner Bros. Home Entertainment May 24,

“The undeniable success of Teen Titans Go!, with its signature blend of action and subversive Super Hero humor, is a testament to the phenomenal work of executive producer Pete Michail and the show team,” said Sam Register,  President, Warner Bros. Animation and Cartoon Network Studios. “Seven seasons, one theatrical feature film, multiple specials, celebrity cameos, and no end in sight, this show has carved out its own lane in the acclaimed legacy established by the original Teen Titans animated series.”

With the help of an ancient Kryptonian power, Lex Luthor unites the world’s Super-Villains to capture all of Earth’s Super Heroes, until … only the DC Super Hero Girls are left to stop the Legion of Doom. Our heroes must cross dimensions to rescue their fellow Super Heroes from the Phantom Zone, but a fortuitous wrong turn leads them to Titans Tower – where they find much-needed allies in the Teen Titans. The young Super Heroes discover their combined strength – and usual comic relief – are essential to save the day in this blockbuster event!

Episodes of Teen Titans Go! and DC Super Hero Girls will be included as bonus content on the Blu-ray and DVD.

From the DC Vault:

Warner Bros. Home Entertainment (WBHE) brings together Warner Bros. Entertainment’s physical and digital distribution businesses in order to maximize current and next-generation distribution scenarios. An industry leader since its inception, WBHE oversees the global distribution of content through packaged goods (Blu-ray Disc™ and DVD) and digital media in the form of electronic sell-through and video-on-demand via cable, satellite, online and mobile channels. WBHE distributes its product through third party retail partners and licensees.

Cartoon Network is the central Kids & Family brand within WarnerMedia and the #1 global animated series network. Combined with a rich legacy of characters and a deep roster of creatives with unique brands of storytelling, Cartoon Network showcases original content from across Cartoon Network Studios, Warner Bros. Animation and beyond that includes such hits as Ben 10, Craig of the Creek, Steven Universe, Teen Titans Go! and more. Under its Redraw Your World tagline, Cartoon Network’s expansive content commitment appeals to the complete spectrum of kids and families including preschoolers, all kids ages 6-11, and family co-viewing. Upcoming new series such as Gremlins, Jade Armor, Total Drama Island, Unicorn: Warriors Eternal, as well as a live-action slate are set to comprise an inclusive Kids & Family programming lineup on Cartoon Network and HBO Max offering more than 300 hours of original content. Seen in more than 185 countries and in 33 languages, Cartoon Network’s historic library can also be streamed on HBO Max.

DC, a WarnerMedia Company, creates iconic characters, enduring stories, and immersive experiences that inspire and entertain audiences of every generation around the world and is one of the world’s largest publishers of comics and graphic novels. As a creative division, DC is charged with strategically integrating its stories and characters across film, television, consumer products, home entertainment, interactive games, DC UNIVERSE INFINITE digital subscription service and community engagement portal. For more information visit dccomics.com and dcuniverseinfinite.com.

Warner Bros. Animation (WBA) is one of the leading producers of animation in the entertainment industry, producing and developing projects for multiple platforms, both domestically and internationally. WBA’s current series include Animaniacs for Hulu, Green Eggs and Ham and Wings of Fire for Netflix, Batman: Caped Crusader, Batwheels, Bugs Bunny Builders, Gremlins: Secrets of the Mogwai, Harley Quinn, Jellystone!, Little Ellen, Looney Tunes Cartoons, My Adventures with Superman, Tiny Toons Looniversity, Tom and Jerry Time, Tom and Jerry in New York, Velma and Young Justice for HBO Max, DC Super Hero Girls and Teen Titans Go! for Cartoon Network,  Dorothy and the Wizard of Oz, Scooby-Doo! and Guess Who?, The Tom and Jerry Show and Yabba-Dabba Dinosaurs! for Boomerang. WBA is also in production on a series of animated longform movie specials for ACME Night, WarnerMedia Kids & Family’s family programming block on Cartoon Network and HBO Max. Programs include Did I Do that to the Holidays? A Steve Urkel Story, Merry Little Batman and an Untitled Looney Tunes Cartoons movie.  The studio is currently in production with New Line Cinema on the upcoming original anime feature film, The Lord of the Rings: The War of the Rohirrim.  WBA’s full-length theatrical film, Teen Titans GO! to the Movies, was released in summer 2018. As home to the iconic animated characters from the DC, Hanna-Barbera, MGM and Looney Tunes libraries, WBA also produces highly successful animated films — including the DC Universe Movies — for DVD, Blu-ray® and digital media. One of the most-honored animation studios in history, WBA has won six Academy Awards®, 40 Emmy® Awards, the George Foster Peabody Award, a BAFTA Children’s Award, an Environmental Media Award, a Parents’ Choice Award, the HUMANITAS Prize, two Prism Awards and 21 Annie Awards (honoring excellence in animation).