To celebrate the 80th Anniversary of Wonder Woman, the iconic Super Hero is being inducted into the Comic-Con Museum Character Hall of Fame, in acknowledgment of her incredible legacy and influence on pop culture. Fans around the world can tune in to the Comic-Con Museum YouTube channel on October 21st and celebrate with DC and the Museum in a toast to the character, with comics creators, talent shout-outs, and more fun moments!

DC Comics superhero Wonder Woman will be inducted into the comic-con character hall of fame as part of her 80th Anniversary Campaign Will Include Character Induction to the Comic-Con Museum Character Hall of Fame in a Virtual Ceremony. Explore the Character’s Legacy as a Global Icon with ‘Wonderful Women of the World’ Releasing Today, and Other Publishing Releases Throughout October, as well as Incredible International Fashion Collabs

DC, Warner Bros. Global Brands and Experiences along with WarnerMedia have unveiled additional plans for a global celebration of the iconic Super Hero. In honor of the legacy that Princess Diana of Themyscira has upheld since 1941, the Comic-Con Character Hall of Fame will be inducting Wonder Woman virtually on Thursday, October 21 and DC will continue to honor Wonder Woman’s 80th anniversary and the character’s impact across comics, film, television with a stunning lineup of publishing pieces, partnerships, special releases and initiatives. Fans can start celebrating her legacy as a pop culture icon and inspiration to fans around the world with Wonderful Women of the World, available in bookstores and comic shops on September 28.
WONDER WOMAN’S VIRTUAL INDUCTION INTO THE COMIC-CON MUSEUM CHARACTER HALL OF FAME 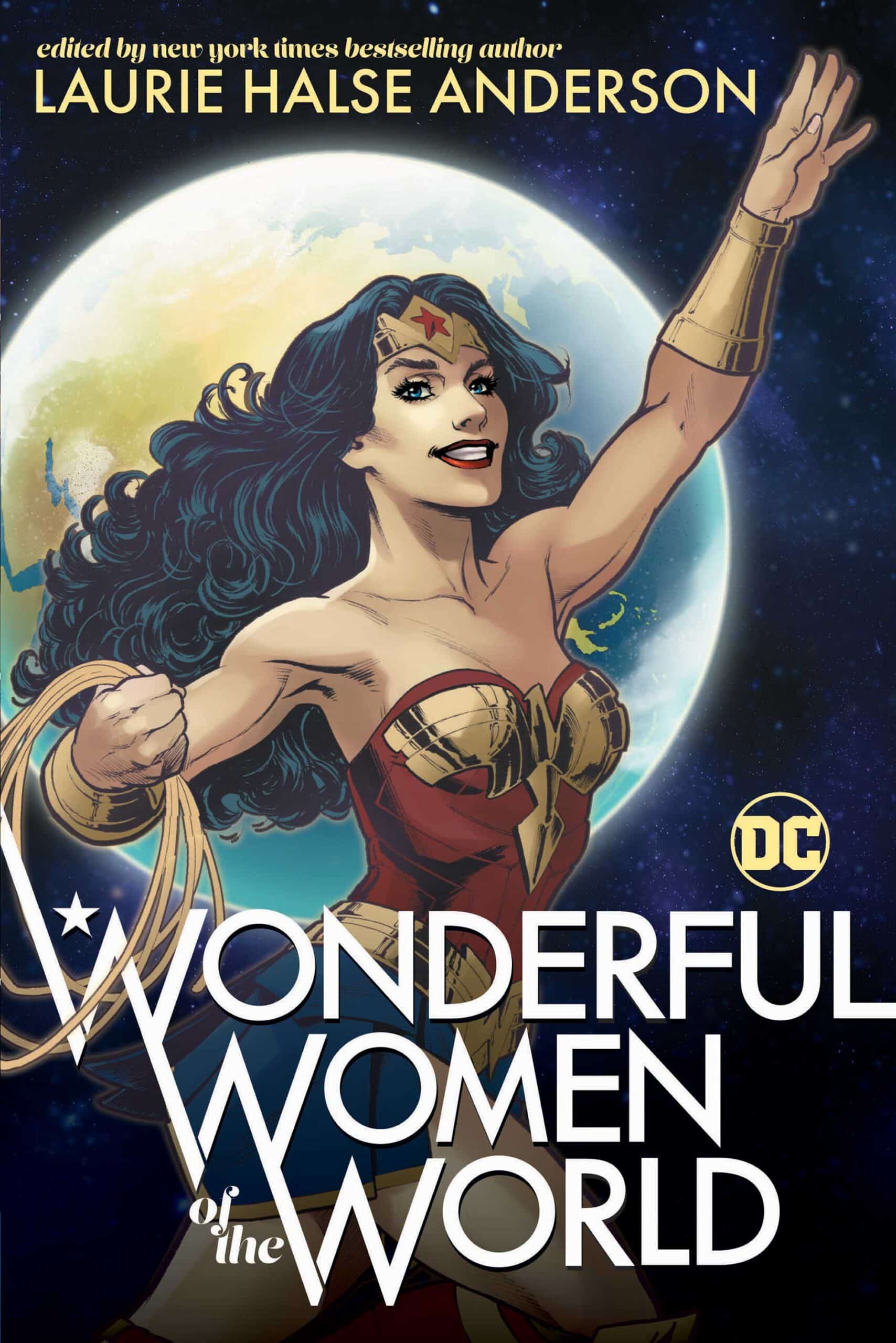 WONDER WOMAN IN COMICS
DC will honor the iconic character’s 80th anniversary with a vibrant collection of commemorative releases, free editions, and new series launches all starring DC’s Champion of Truth and Warrior for Peace—with titles to be released in time to celebrate Wonder Woman Day on October 21, and beyond.

Wonderful Women of the World is an inspiring anthology showcasing 23 trailblazing women around the world. Tales of the real-world heroes who take up Princess Diana of Themyscira’s mantle and work in the fields of science, sports, activism, diplomacy, and more include Beyoncé, Serena Williams, Ruth Bader Ginsburg, Greta Thunberg, and Malala Yousafzai, amongst others. The book is available in comic book shops and bookstores today.

Wonder Woman: 80 Years of the Amazon Warrior follows Wonder Woman from her first appearance through some of her most incredible battles in this hardcover special edition spanning over 400 pages.

Wonder Woman 80th Anniversary 100-Page Super Spectacular will bring together some of the greatest storytellers in comics and entertainment for a tribute to Wonder Woman in a collectible keepsake. Available on October 5, fans can look forward to original stories and a beautiful art montage by Eisner Award-winning artist Yanick Paquette with colors by Nathan Fairbairn.

Nubia and the Amazons follows the ongoing adventures of Nubia after the thrilling events of Infinite Frontier. The new series launching on October 19, is written by Vita Ayla and Stephanie Williams with art from all-star artist Alitha Martinez. After Nubia becomes queen of Themyscira, she is faced with new challenges including the unexpected arrival of new Amazons. As this hero is forced to reckon with her past, she must forge a new path forward for her sister.

Launching on November 16, comes the highly-anticipated Wonder Woman Historia: The Amazons. The new series by writer Kelly Sue DeConnick and artist Phil Jiminez will explore the ancient history of the Amazons. Book One will be released on November 16 with Jimenez’s artwork. Book Two and Three will be released in Spring and Fall 2022 respectively with artist Gene Ha on Book Two and Nicola Scott on Book Three. 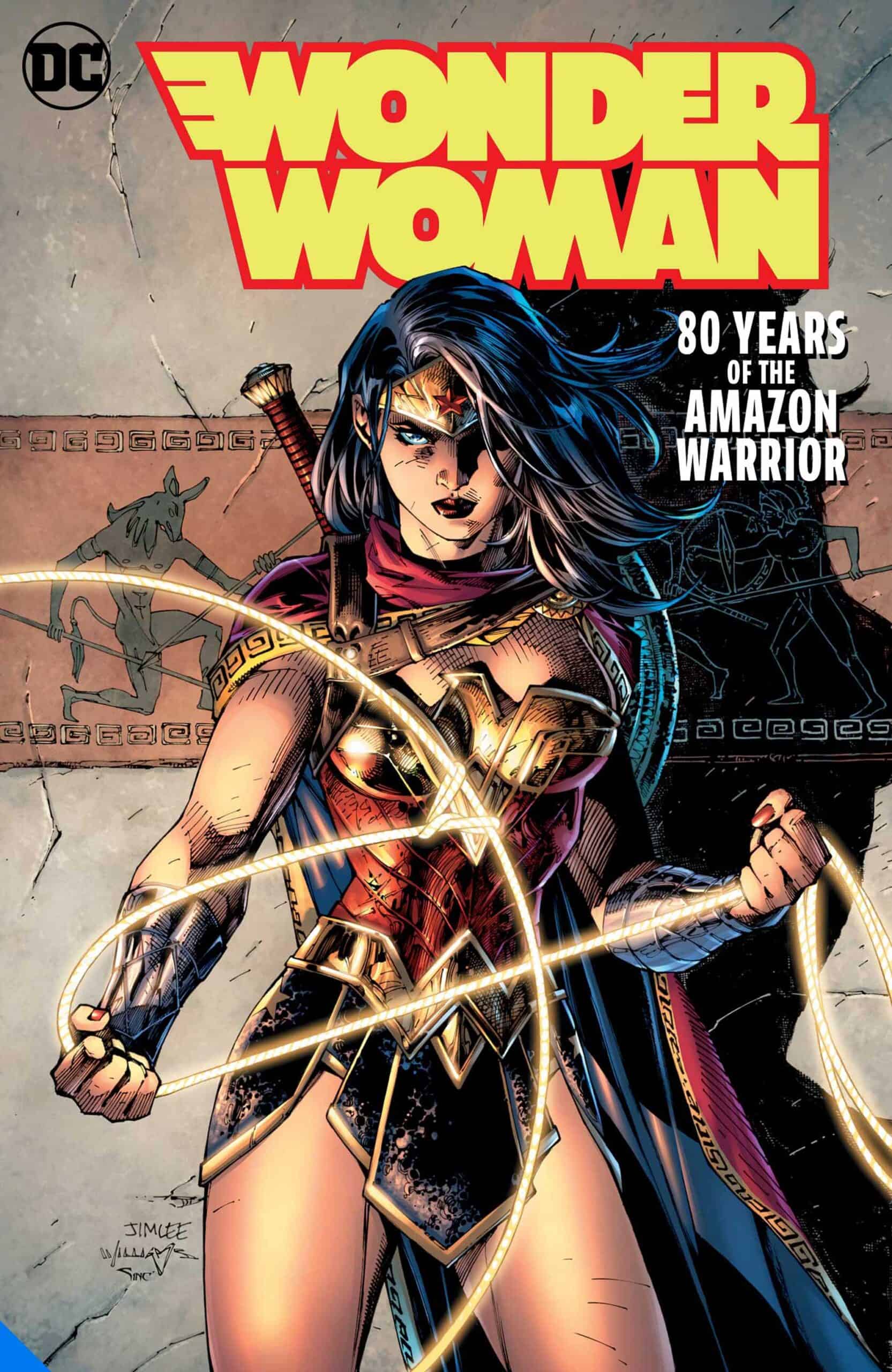 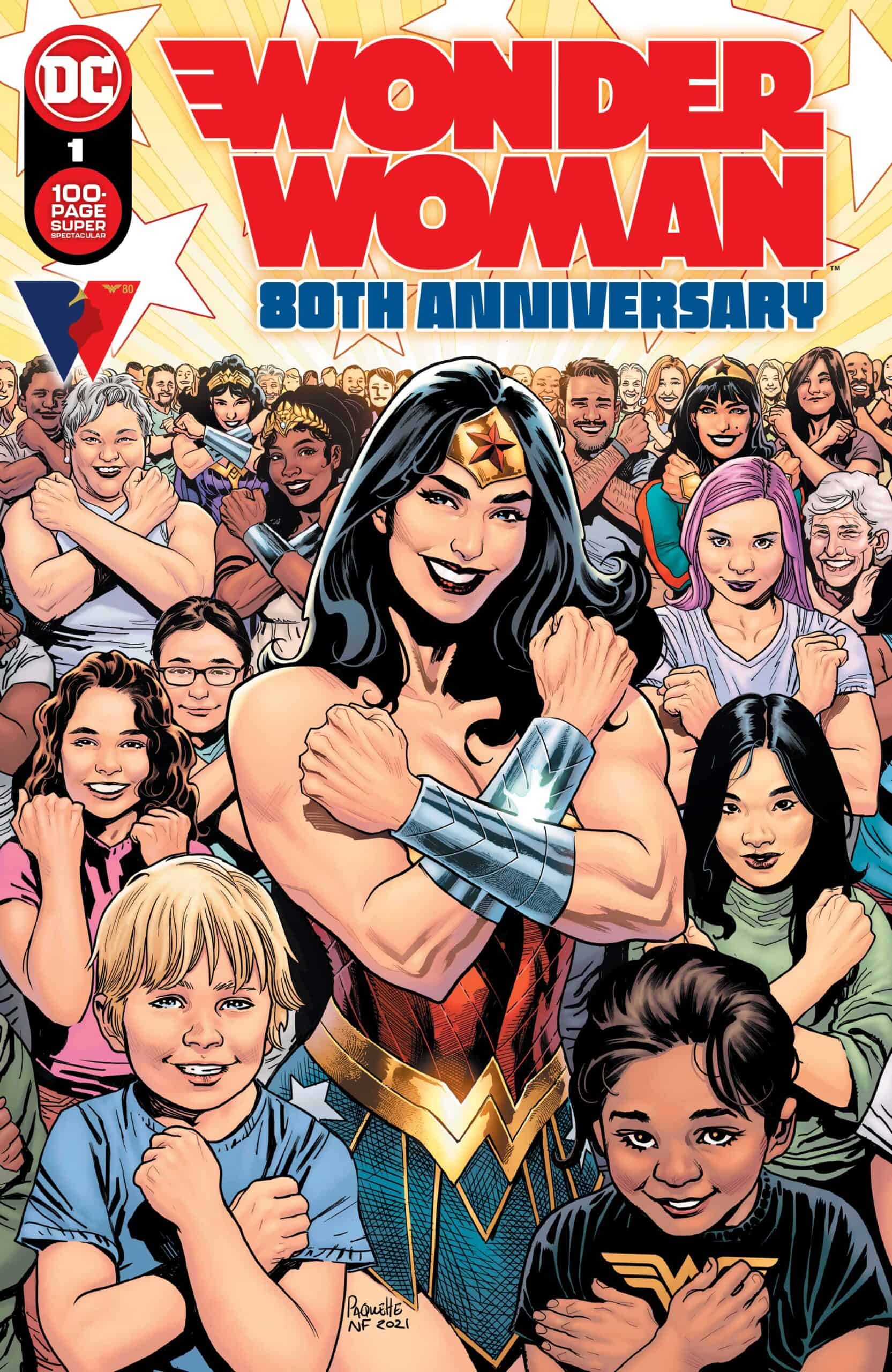 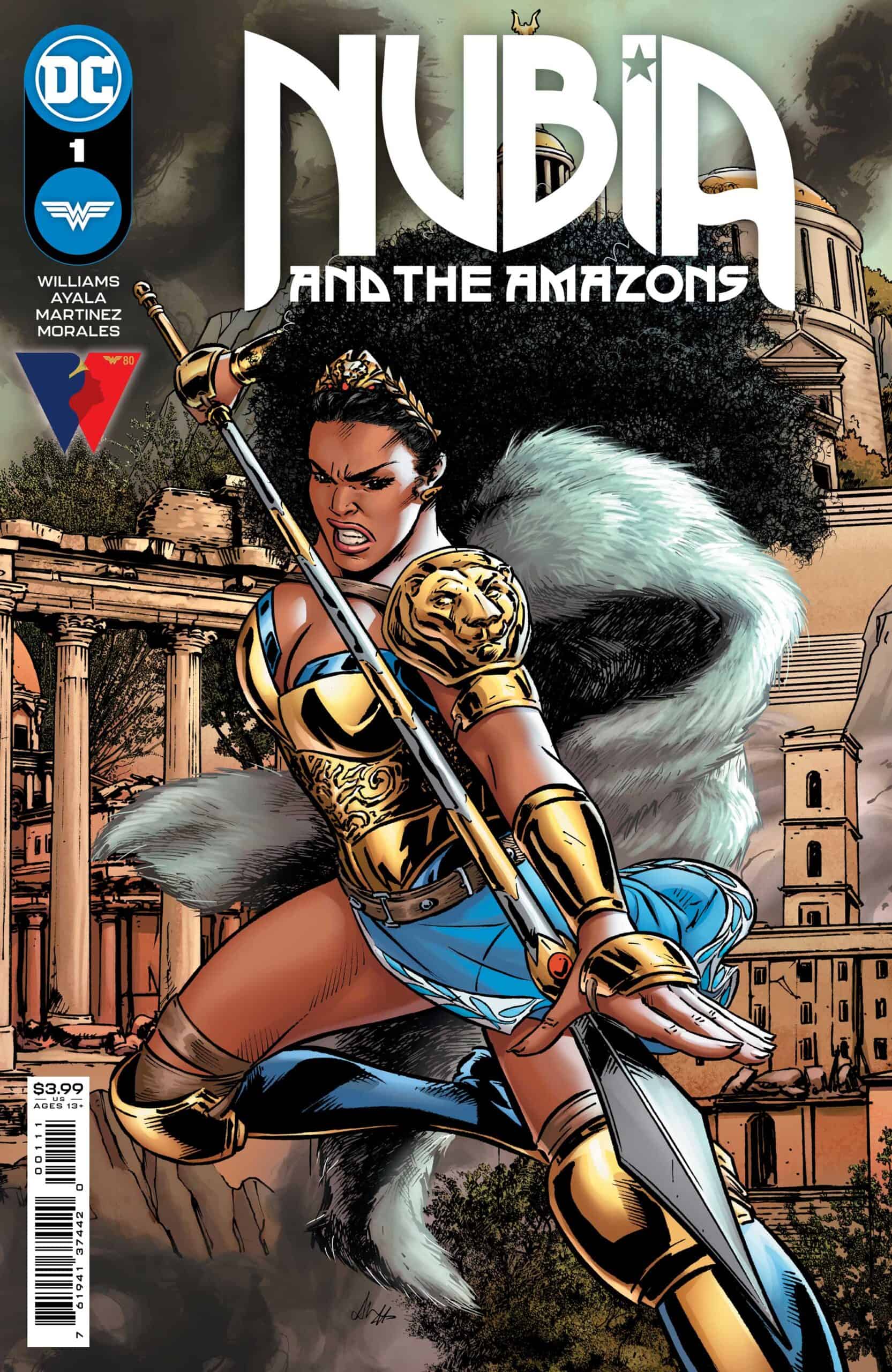 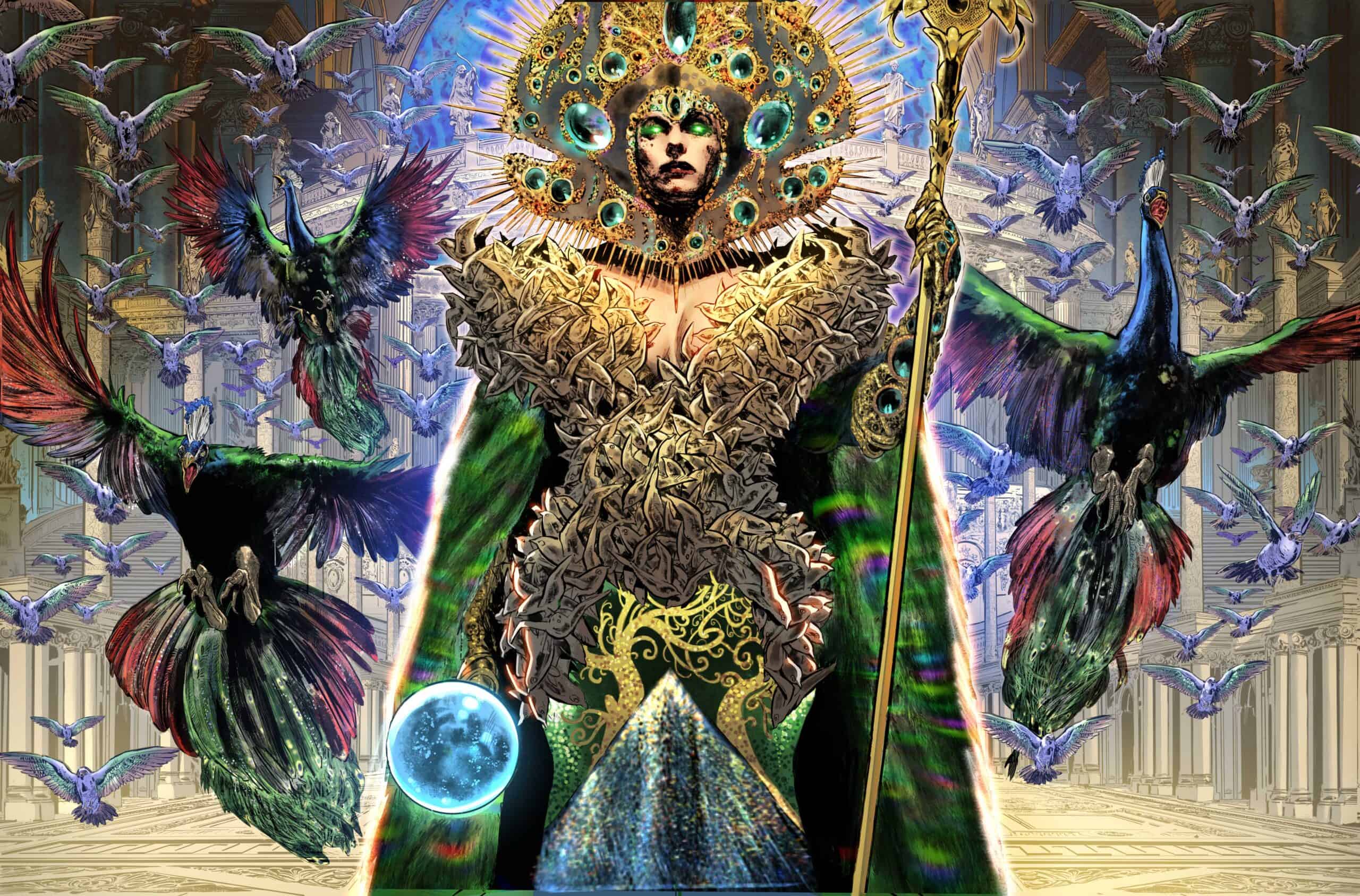 WONDER WOMAN FASHION, EXPERIENCES, AND MORE
Wonder Woman inspires fans around the world, and, to celebrate her 80th anniversary, DC and Warner Bros. Consumer Products have partnered with international designers and premier partners including:

Echelon, the connected fitness company revolutionizing the way people move, will unveil an exclusive line of Wonder Woman-branded apparel and fitness equipment in the United States—including a jump rope Lasso of Truth. In addition, Echelon will host two warrior-themed cycling and rowing classes on the Echelon Fit mobile app on Wonder Woman Day. Echelon is also a sponsor of the Wonder Woman Virtual Run Series, which fans can register for now. 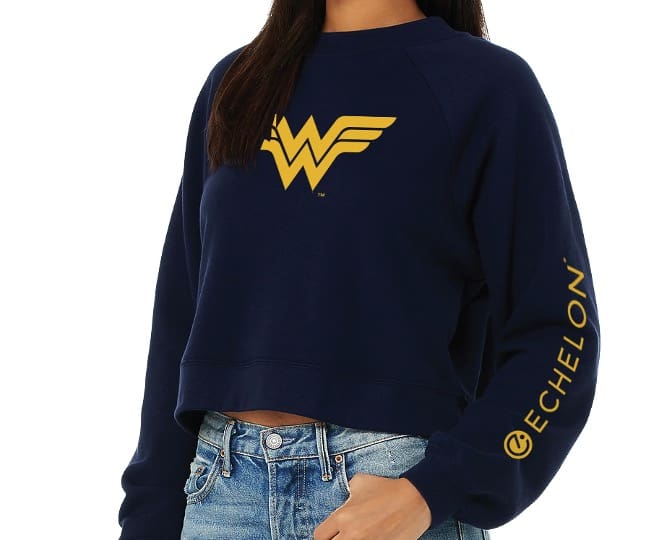 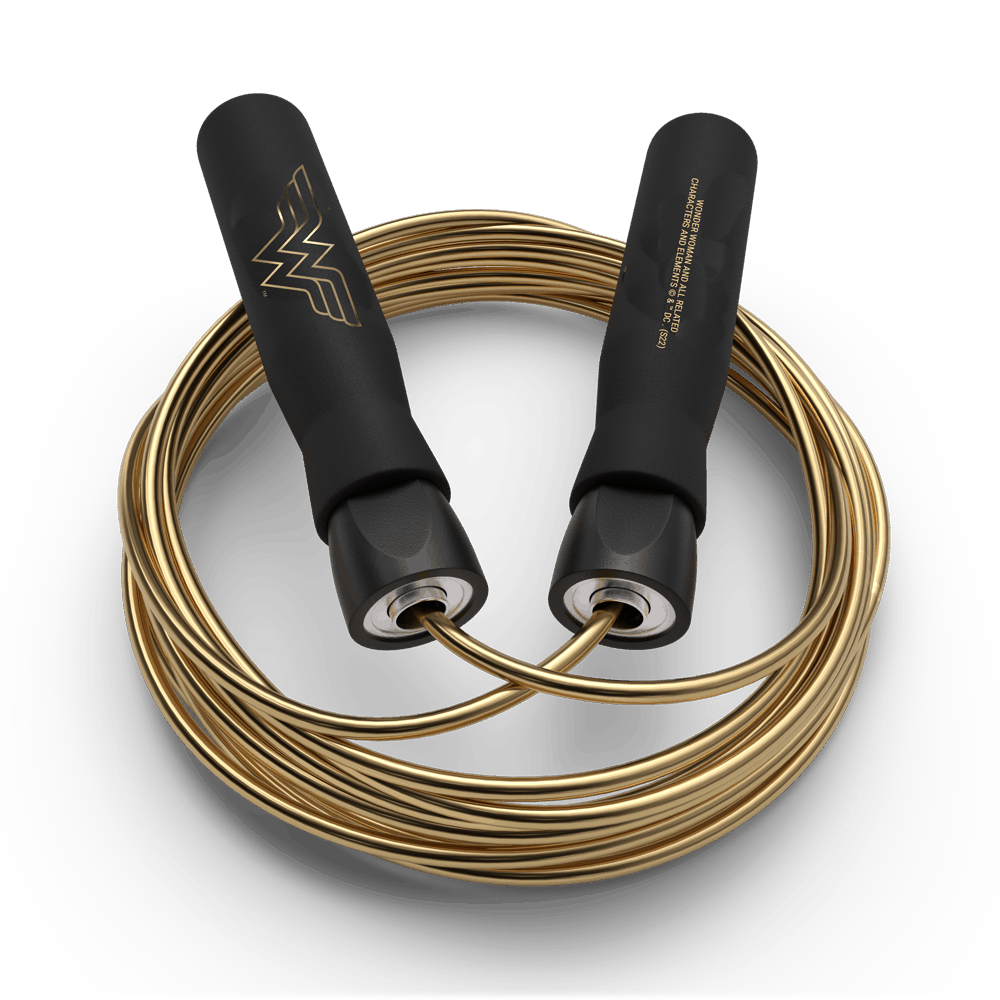 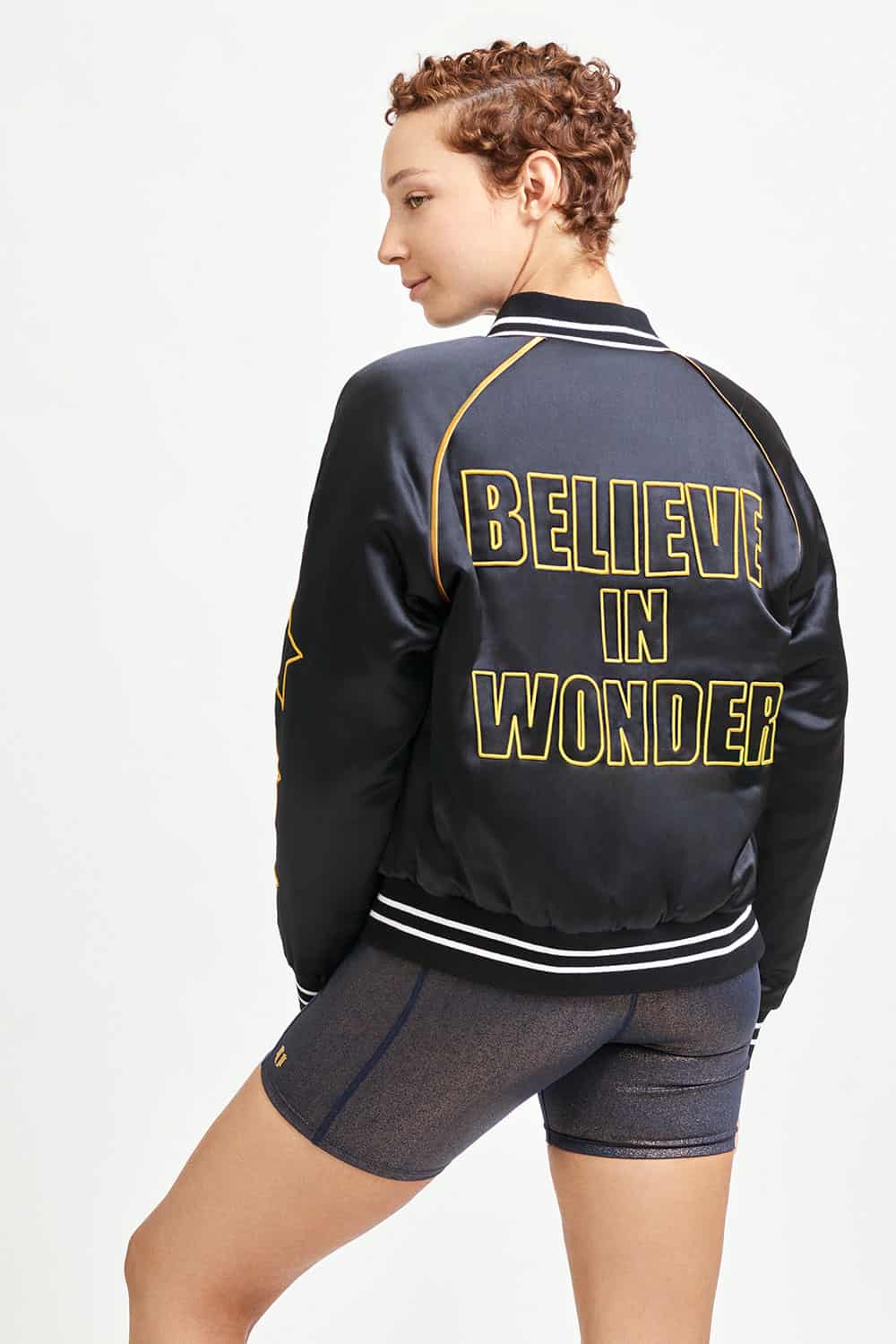 Zales crafted a stunning collection of Wonder Woman jewelry, with classic and modern pieces for the whole family to enjoy that celebrate the Amazonian princess. 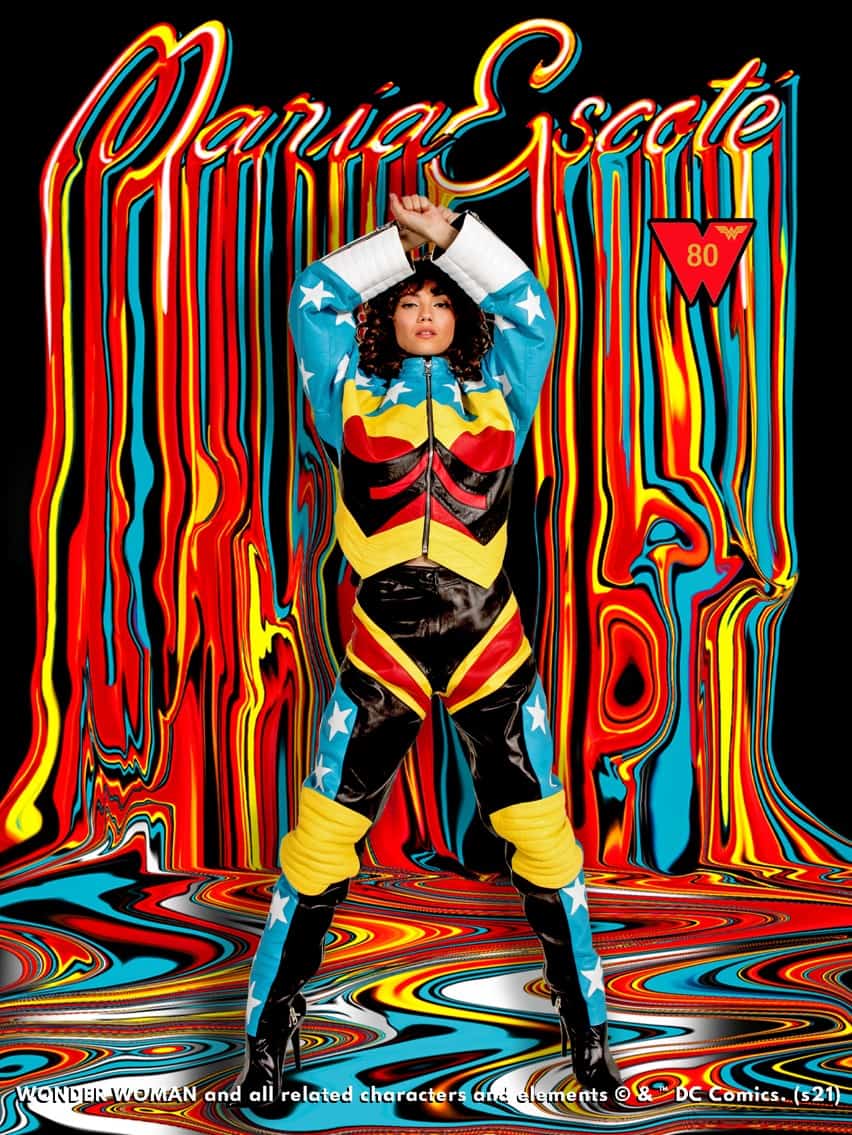 In France, La Redoute selected four unique designers (Vanessa Seward, Mossi, Sakina M’Sa, and Elise Chalmin) to create modern capsule collections, each one spotlighting Wonder Woman’s emblems/symbols as a representation of what it means to be a pop culture icon. 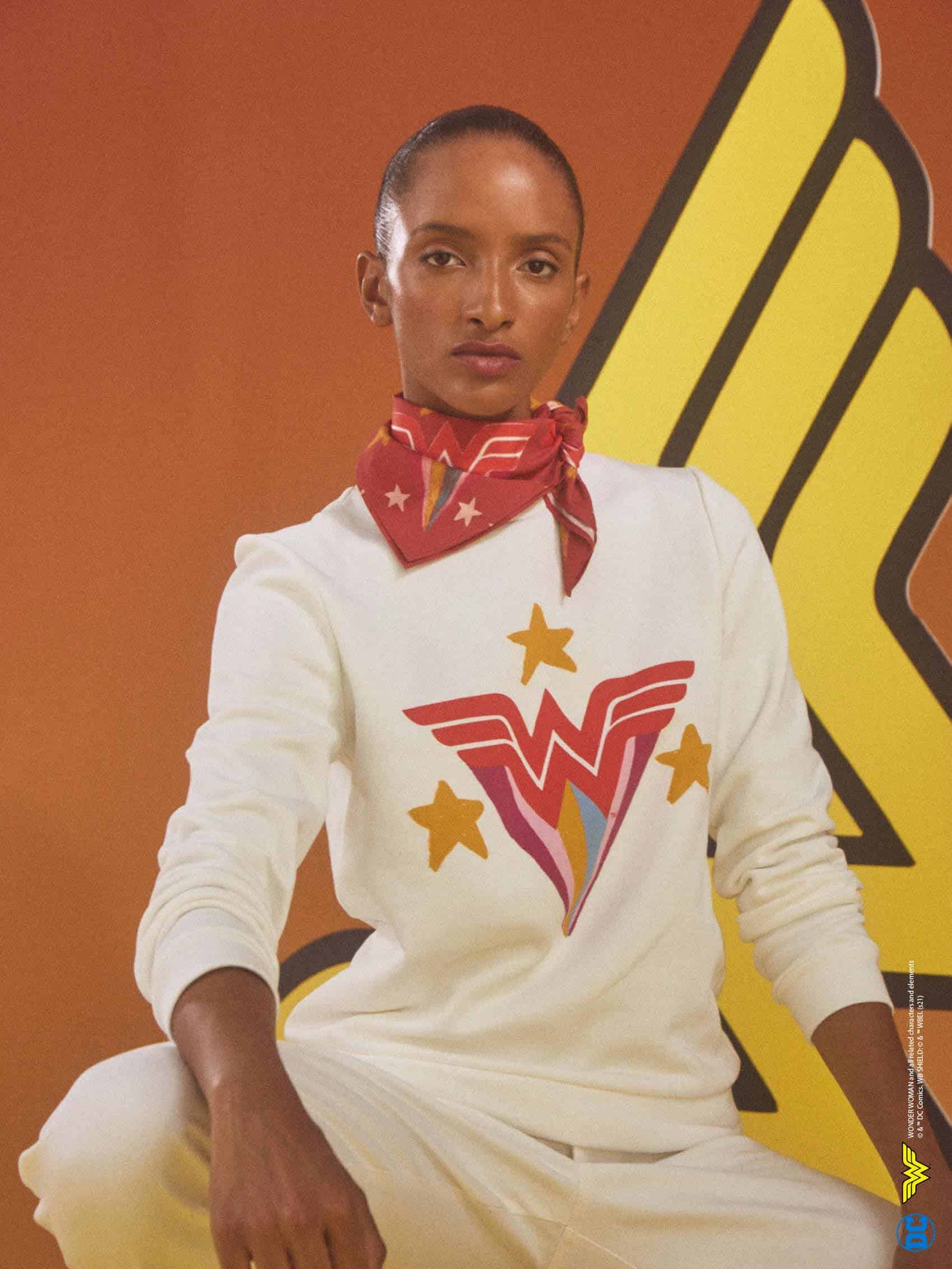 Marina Hoermanseder answered the Amazonian call in Germany, creating a collection of bespoke pieces that bring the high-end details of Wonder Woman’s warrior culture to life in a truly elegant way. 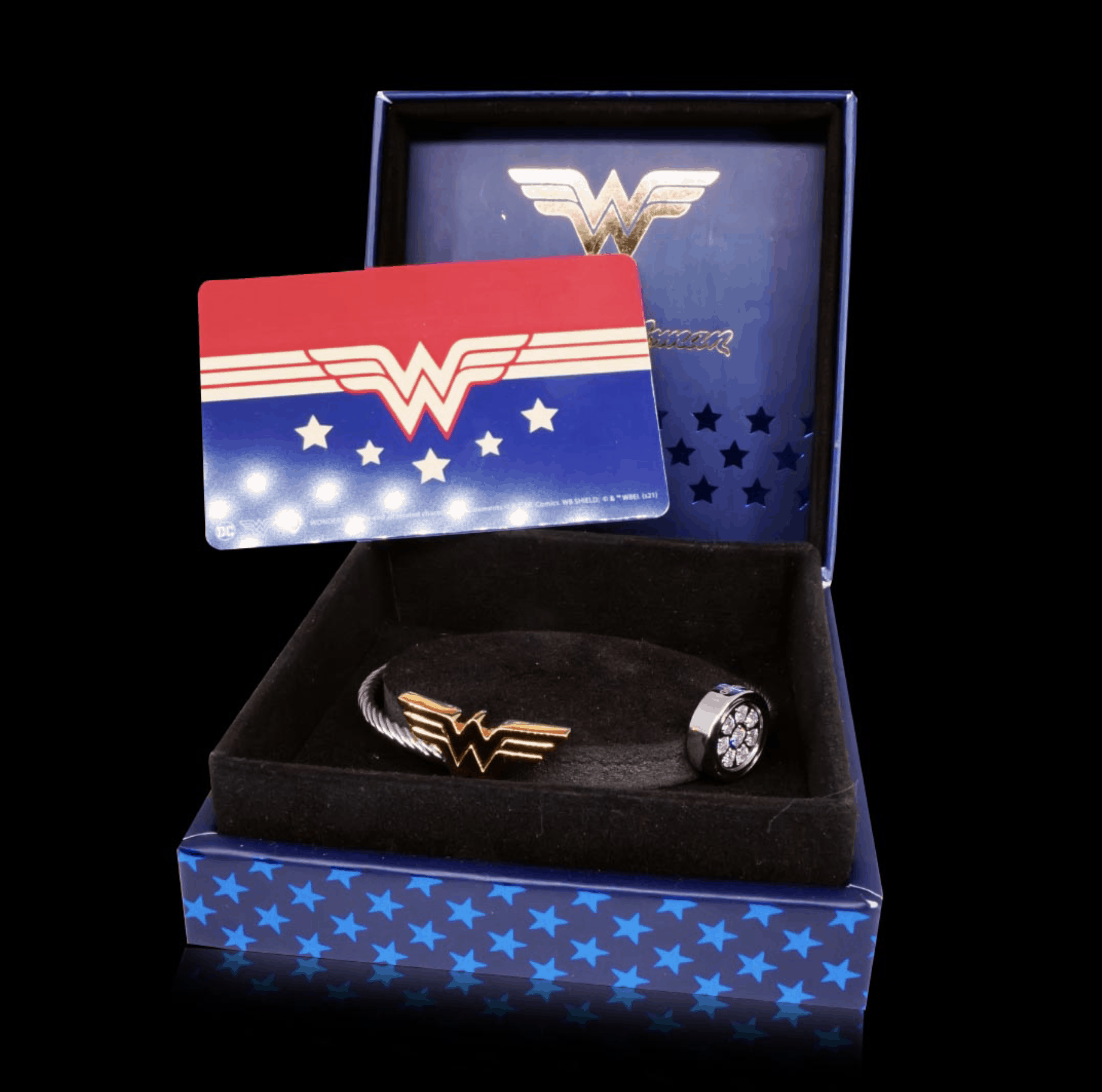 India-based designer Nivedita Saboo will release a beautiful custom couture collection in late October, which is inspired by Amazonian sisterhood and Wonder Woman’s commitment to togetherness as well as making the world a better place.

Additionally, the Brazilian DC Store will debut an exclusive suite of products to commemorate 80 years of Wonder Woman storytelling. Other official partners in the region like Havaianas, Riachuelo, and Marisa will join in the celebration too with their very own merch drops, while Yescom will bring the Wonder Woman 80th Anniversary Virtual Run to homes and neighborhoods all around Brazil in October to coincide with Wonder Woman Day.

Cartoon Network will celebrate the Princess of the Amazons with a special episode of Teen Titans Go! airing on Saturday, Oct. 23 at 9:00 a.m. ET/PT. In this special episode titled, “DC,” the Titans head to DC’s headquarters to celebrate Wonder Woman’s 80th birthday party.

In Justice Society: World War II, Stana Katic leads the cast as Wonder Woman. She meets The Flash and the team of Golden Age DC Super Heroes known as The Justice Society of America. Available now on Digital, Blu-ray & 4K.

WONDER WOMAN IN INTERACTIVE ENTERTAINMENT
In celebration of all Wonder Woman characters, Injustice 2 Mobile will introduce the newest variant – Classic Wonder Woman – in October as an all-new powerful Gold character designed based off of her early comic book appearances. Fans will also be treated to an entire slate of Wonder Woman-themed special events and free rewards.
WONDER WOMAN AROUND THE WORLD
In honor of Princess Diana of Themyscira, DC and Warner Bros. have once again teamed up with the City of Burbank, this time, to unveil a statue of the Super Hero in Burbank, CA. Based on a DC Direct statue by acclaimed Wonder Woman cover artist Jenny Frison and digitally sculpted by John Gabriel Mathews, the Wonder Woman statue will be brought to life in 2022 by Visit Burbank in partnership with DC. Stay tuned for more details!Global experiences inspired by Wonder Woman including a “Believe in Wonder” event in the U.K. Focusing on Wonder Woman’s Spirit of Strength the event will bring Wonder Woman’s legacy to life through activities for all the family to enjoy.

Wonder Woman will be celebrated in Italy through a collaboration with Gruppo 24 Ore that celebrates the anniversary of the heroine through an exhibition “WONDER WOMAN The myth” hosted at Palazzo Morando, Milan. The exhibition will open to the public on November 17, 2021 and it will close on March 20, 2022. Accompanied by the claim #wonderseitu, the project – the first of its kind in Italy – explores Wonder Woman’s character and her 80 years of history, with an interdisciplinary approach that touches on several fields, from illustration to comics and the cinema, from pop culture to fashion. The exhibition journey will be articulated in sections mixing original comics and tables, video-installations,costumes and props from the big screen universe.

Spain will feature WONDERWOMANxMARÍAESCOTÉ, a collaboration with DC and Warner Bros. Consumer Products, that is a nod to female empowerment, a very personal and colorful vision of the DC character through the creative and optimistic universe of the Catalan designer. María Escoté The collection will invite fans to see the world through the eyes of Wonder Woman and will be an ode to feminism, designed for the everyday woman who, deep down, is unique.

On October 8, fans in France will be treated to a special “Wonder Woman 80th” panel on CannesSeries.com with an exclusive digital masterclass with Lynda Carter. Additionally, Wonder Woman 1984  will make its debut in French theaters on October 21 through a one-time only screening in a secret place … Stay tuned for more!

Chilean fans can celebrate Wonder Woman in style with a special make-up kit partnership with PETRIZZIO.

Colombia, Peru and Ecuador will feature Social Media activations and will release Wonder Woman apparel for children and adults.

WONDER WOMAN ON SOCIAL MEDIA
Bringing the celebration to TikTok starting on October 16, DC and Warner Bros. will launch the #WonderWomanSpinChallenge where fans can ‘spin into their super self!’ Make sure to tune into DC FanDome to find out more!
THE HISTORY OF WONDER WOMAN
Wonder Woman first appeared in All Star Comics #8 on October 21,1941 in a back-up story meant to test her appeal at a time when female Super Heroes were rare. An instant favorite, Wonder Woman was soon headlining her own standalone title less than a year later. Subsequent generations came to know the Amazonian princess with silver bracelets on her wrists and a magic lasso by her waist via her hit 1970’s television series as well as roles in animated shows and movies. The groundbreaking 2017 film Wonder Woman by director Patty Jenkins and starring Gal Gadot was the largest grossing live action film ever for a female director at the time of release. The sequel, Wonder Woman 1984 premiered on HBOMax and in theaters globally December 25, 2020.  Warner Bros. Pictures confirmed the third Wonder Woman movie starring Gadot will also be written by Jenkins. 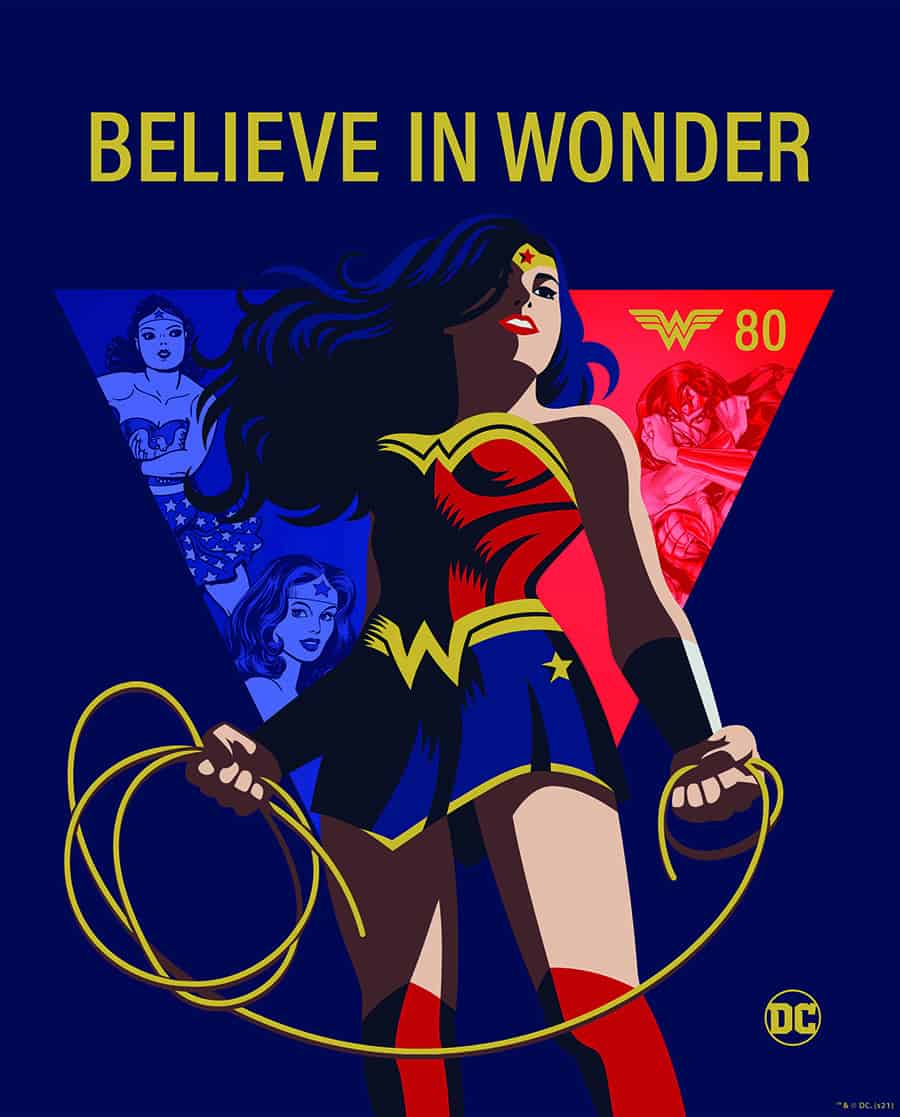 Fans can delve into the history and enduring influence of the iconic character this October with the “Wonder Woman Authors & Talent Panel” on DC Community.