With every new season that a television show goes through there are bound to be changes, which is necessary to keep it fresh and interesting. Well, Young Justice has definitely made the turn down “Interesting Street” at blazing speed, starting with Aquaman leaving the Justice League to rule Atlantis. However, transitions can prove to be a daunting task and Aquaman is seeing this first hand. Tula, an Atlantean he previously had feelings for, died in battle years ago, and Kaldur also discovered his father is the DC villain Black Manta, sworn enemy of the former Aquaman, King Orin. Recently, Kaldur has participated in a secret gathering with Batman, Wonder Woman, Nightwing, Oracle, Robin (Tim Drake), and Miss Martian to defeat The Light, manipulating his friends and teammates in the process.

Experiencing these heavy feelings, Kaldur, in “Quiet Conversations”, takes a new meta-teen girl to Atlantis. When the unnamed girl’s powers manifested in “Early Warning,” wherein her newly formed gills prevented her from breathing above water. Kaldur decides to take her to Atlantis to meet King Orin and have her live with his birth mother and adoptive father. Kaldur takes the anonymous girl and a “protégé” of sorts to meet with King Orin. Cut seen to the mysterious protégé and Kaldur embracing each other and sharing a kiss. 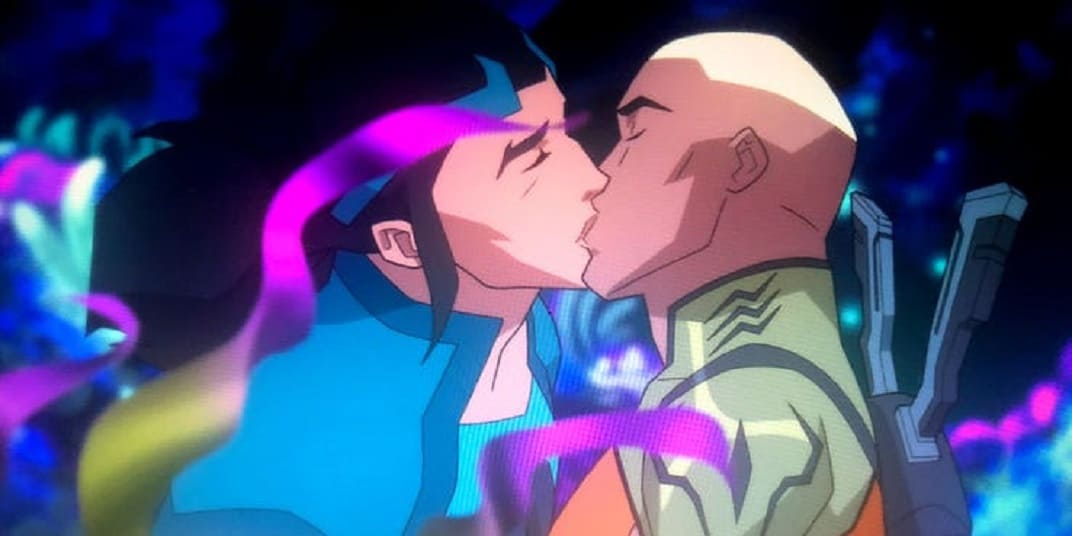 Now the Rebirth version of Kaldur in Teen Titans is openly gay, so chances are the Young Justice animated version seems to be following the established comics canon. Creator, Greg Weisman stated clearly that “there are already LGBT characters in Young Justice”.

Another response came after Kaldur’s cameo in The Flashpoint Paradox animated film, with Weisman replying, “You sure?” when someone referenced Kaldur as being straight.

With the Justice League’s leader’s confirmation as a member of the LGBTQ community, this is another great leap and statement for continued acceptance of life– all life. As kids and adults alike, comics and comic shops continue to be a haven of inclusion, acceptance, and safety. As kids, we read and dream of flying, healing quick, or being able to read minds. As adults, we still dream of those things, however getting older that whole “healing quick” thing seems really attractive. People all over the world face inequality and violence– even death– for simply loving someone else. We march, we advocate, and we vote, so people may love and live with whom they choose. It’s times like this, when shows like Young Justice take steps like these, that it is my hope that someone (of any age) can look at this and feel that much better in knowing that they are not alone, and there are superheroes in all forms in their corner, waiting for them with open, non-discriminating arms. In 2019, we are blessed with the fact that comics are bolder, more provocative, and continue to push boundaries that we as fans never thought possible. In 2019 we can enjoy our favorite characters just a little bit more because they love and feel just like we do.

NEWS WATCH: Change the Fate of the Galaxy Forever in WE ONLY FIND THEM WHEN THEY’RE DEAD #8
August 2, 2021