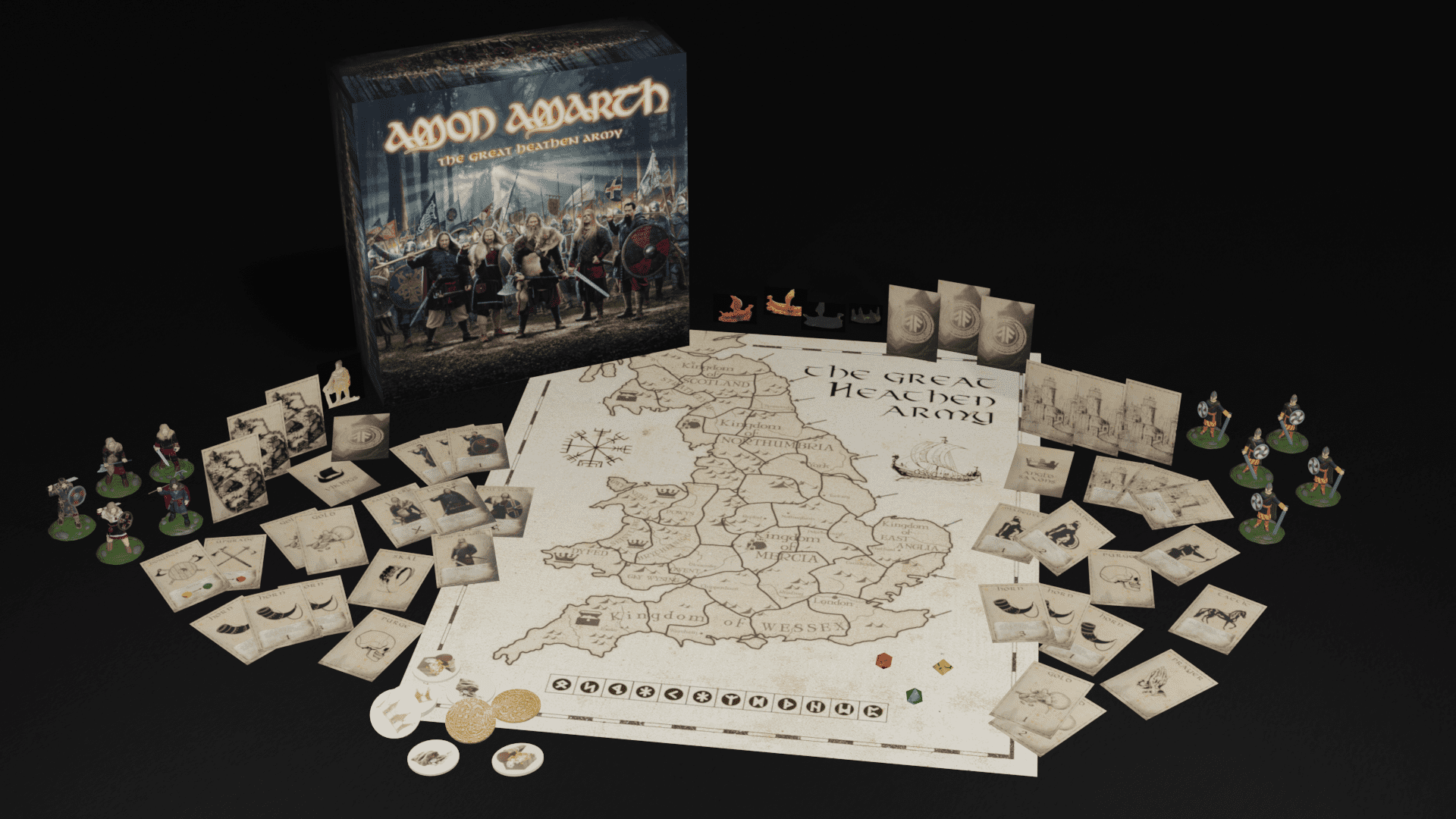 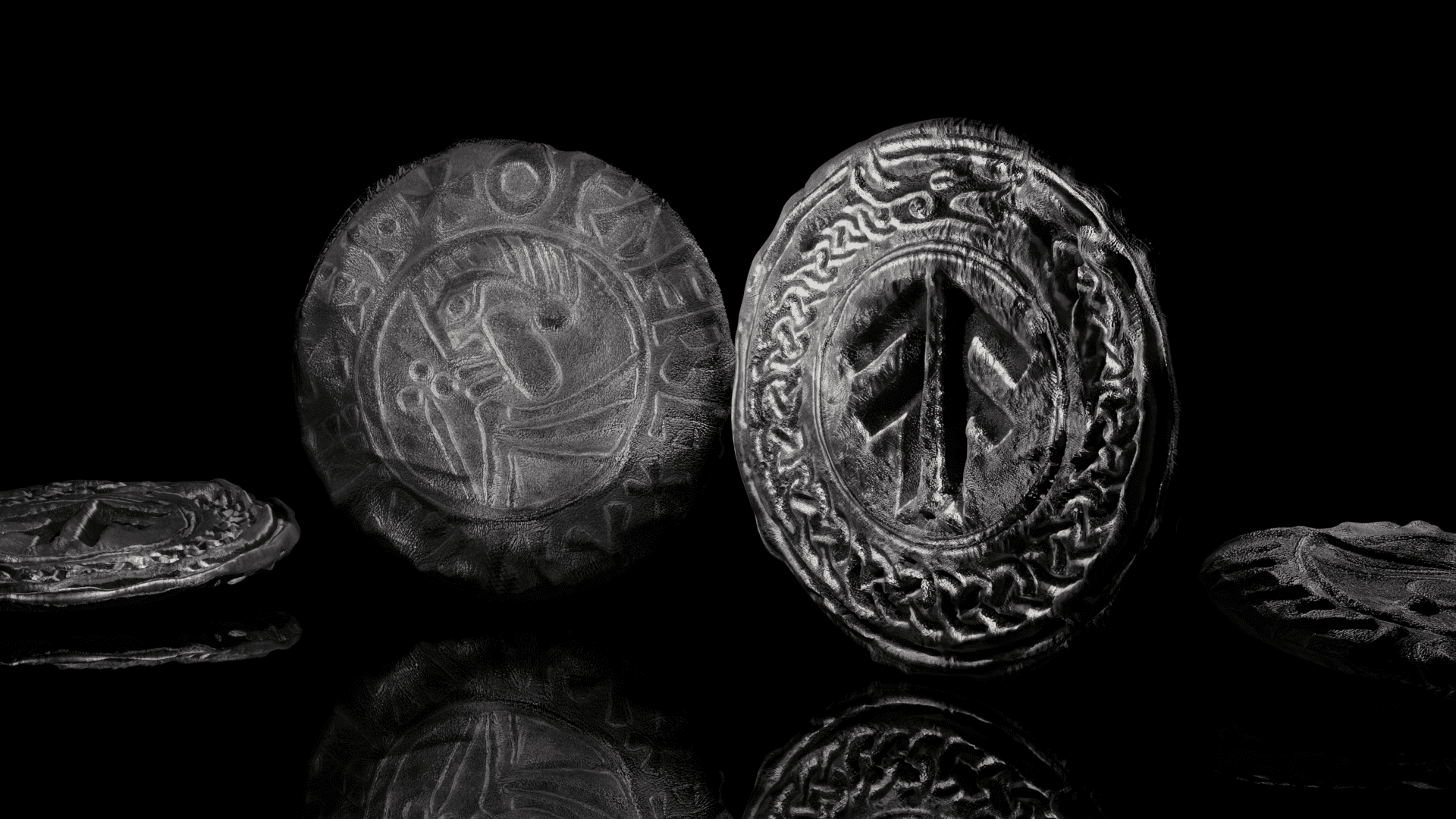 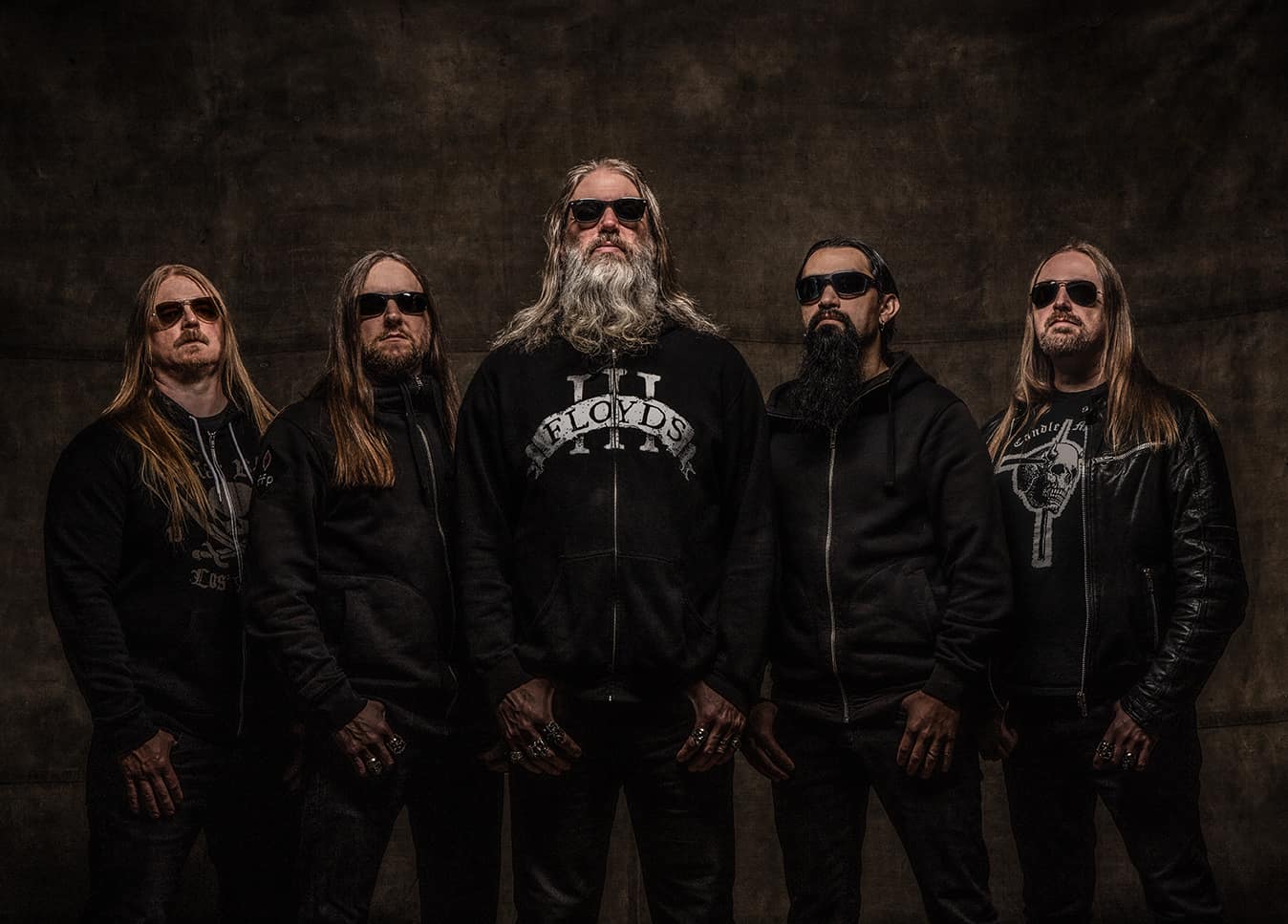 New York City—Z2 is proud to announce Amon Amarth: The Great Heathen Army, a new graphic novel and board game collaboration celebrating the heavy metal quintet’s last album of the same name. Channeling the thunderous epic poem winding through these nine tracks, the graphic novel dives into the heart of the Viking Age, as oars propel longships to shores awaiting the brutal collision of steel and bone. 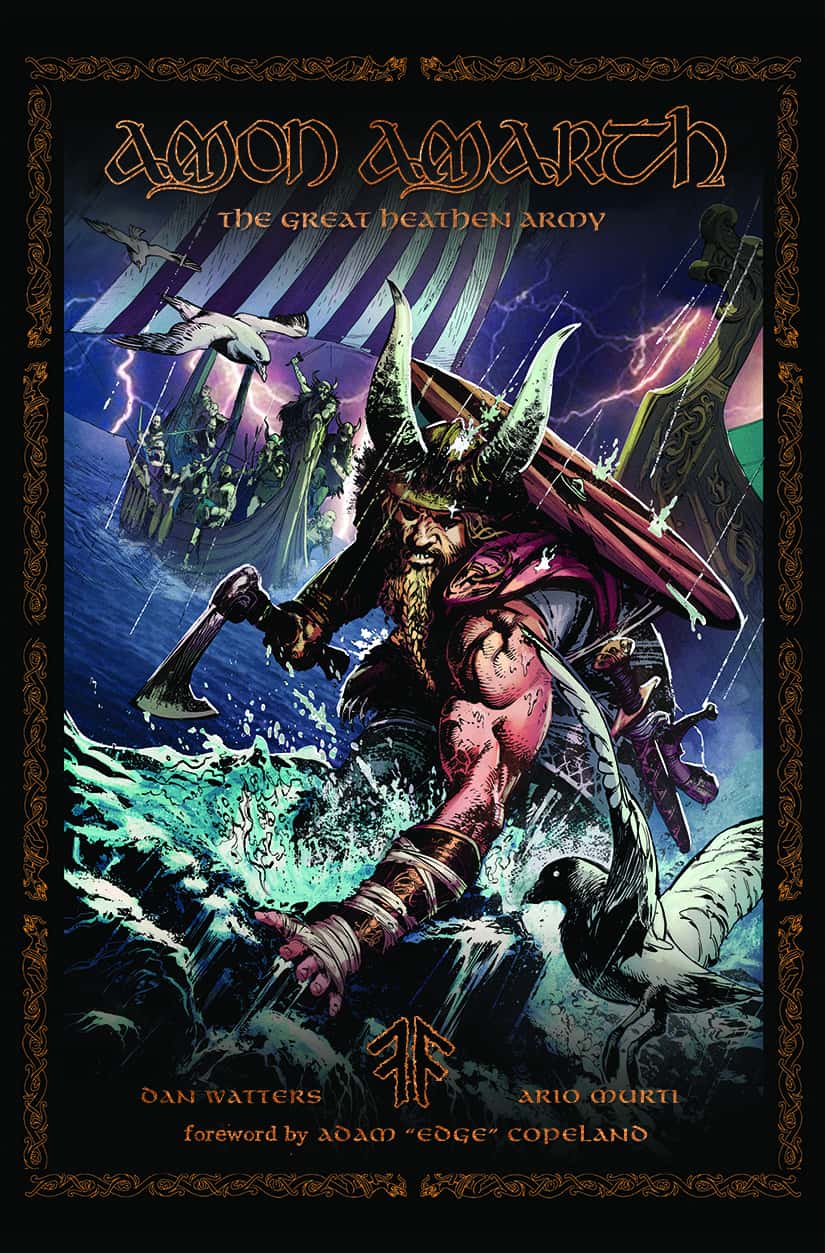 “Heathens from shore to shore! We are thrilled to announce that we’ve partnered with Z2 to bring you The Great Heathen Army as a full-length graphic novel,” Amon Amarth explains. “It’s a brutal story of war, bloodshed, and glory during the time when the Viking raids brought terror to the shores of England.  We’ve also produced an accompanying replica of The Great Heathen Army board game that you see in our music video of the album title track. We hope you enjoy it. Skål!”

The pages of The Great Heathen Army unspool throughout a 9th-century battle siege, in which a coalition of Viking warriors from Scandinavia invades England, wreaking unprecedented chaos. The tale dynamically pivots between large-scale dioramas of destruction to the lives of the men and women whose decisions leveled populations, capturing the devastating human cost to both sides of this legendary clash. The book will also include a foreword from professional WWE Wrestling Hall of Famer and Viking devotee, Adam “Edge” Copeland.

“Getting to work with Amon Amarth on The Great Heathen Army means diving into myth, history, and heavy metal, which sounds like a perfect date night to me,” Watters explains on the writing process. “Our aim with this book is to make the reader feel like they’re truly there, facing the terror of the invaders in that old world where monsters and gods lurk beneath every stone and in every bloodthirsty eye. And also to show some Vikings doing some terrible things with some very big axes.”

Since 1992, Amon Amarth has elevated metal into a primal onslaught of increasingly blistering albums. The Swedish group channels the awe and fury of a Medieval Viking raid into a horizon of bass-pedal-lined, chugging anthems destined to ignite chaos at live shows the world over. The group’s latest full album, The Great Heathen Army, punctuates 30 years of reaving hooks with a concept album about sea-ward ravagers clashing with swelling armies—and the generals who continually grind the cogs of war.

“Amon Amarth are well known for their historic epics and mythology, woven throughout the band’s history,” editor Rantz Hoseley continues. “A graphic novel inspired by their music feels long overdue. The songs of The Great Heathen Army conjure a saga in the listener’s mind, ancient and timeless and powerful, and it’s our honor to expand upon that bloody experience.”

Z2 and Amon Amarth present The Great Heathen Army in standard hardcover and deluxe hardcover editions, set to release in Fall 2023. The deluxe hardcover will come signed with three art prints illustrated by Tom Thiel, a Silver Pennigar Viking Collector’s Coin, and a limited edition board game with an oversized battle map.

The Great Heathen Army board game will also be available separately. In the deck-building war game, players assume the role of the Vikings on the attacker’s side or that of  the Anglo-Saxons on the defender’s side; each side will strategize their own goal to defeat or repel the other in absorbing, hours-long campaigns.

The Great Heathen Army Board Game

From pole to pole and sea to sea, AMON AMARTH are undisputed kings of Viking heavy metal. Formed in Tumba, Sweden, in 1992, they have forged an extraordinary legacy over three decades of thunderous, anthemic metal, all rich in the magical imagery of Viking history, folklore and culture.

From their underground smash debut Once Sent From The Golden Hall (1998) onwards, Amon Amarth have been an unstoppable creative force. With a unique and unmistakable sound that combines the best of several epic strains of metal, the quintet have become renowned for their ageless anthems and explosive, theatrical live shows. Albums like 2008’s widely acclaimed Twilight Of The Thunder God and 2016’s conceptual triumph Jomsviking, the Swedes have been consistent standard bearers for heavy metal as a life-affirming and communal experience, armed with a seemingly endless stream of instant classic songs.

Now reaping the rewards of all those years of hard work, Amon Amarth are now regarded as one of the metal world’s most vital and imperious live acts. From headlining festivals across Europe to claiming a place on Slayer’s final tour of the US in 2019, they have honored the adventurous ethos of their Viking forebears by taking their music anywhere and everywhere.

Unfortunately, as the world ground to a halt early in 2020, Amon Amarth were in the midst of a wildly successful world tour in support of their most recent album, Berserker. Disappointed but unbowed, the band decided instead to forge a new creative path, resulting in their most crushing and heroic full-length album to date, The Great Heathen Army.

“Basically, we were in South America when the shit hit the fan, so we had to cancel the last couple of shows and head home,” recalls vocalist Johan Hegg. “At first we thought we’d just see how it played out, and maybe book a couple of tours, but fairly soon we realised it was going to be a long hiatus. When it was getting close to being a year, we thought, fuck it, there’s no point in going back out on the road with an old album, so let’s just start working on new stuff instead. So that’s what we did.”

One of the best-loved metal bands in the world, Amon Amarth are firmly dedicated to aiming high when they hit the studio. Recorded with esteemed studio guru Andy Sneap at the controls, The Great Heathen Army represents another bold leap forward for the band, as their trademark sound undergoes yet another skilful, evolutionary overhaul, both lyrically and musically. From the noisily rabble-rousing Find A Way Or Make One and the pummelling, pugilistic Get In The Ring, to the evocative fury of Saxons & Vikings and the cinematic squall of the title track, The Great Heathen Army encapsulates the essence of this legendary band, while still allowing acres of space for new ideas.

“Again, The Great Heathen Army is not a concept album like Jomsviking, but I’m taking inspiration from some of the same historical elements,” says Hegg. “There were also some really cool and different ideas I wanted to explore, and they came very much from my wife, Maria, who has been tapping into the more esoteric aspects of Viking lifestyle and culture. Musically, I would say there are a couple of surprises on there, a little bit of uncharted territory for Amon Amarth. Overall it’s one of the heavier albums we’ve made. There are some dark and heavy songs that are really powerful and in-your-face, but we obviously have some trademark Amon Amarth songs on there as well, and a few surprises. It’s a really well-balanced album. It sounds great. Andy Sneap is awesome. It was great to be able to work with him again.”

Buoyed by the most dynamic and destructive set of songs Amon Amarth have written in a long time, The Great Heathen Army is an album fuelled by inspirational stories. While still rooted in times past, these tales of bravery, brutality and dogged determination have very obvious resonances amid the troubled times we live in today.

“That’s kind of what the song Find A Way Or Make One is about,” Hegg notes. “You might be facing obstacles, whether it’s the pandemic or something else, and there are no ways around it, so you have to make a way. That’s what the Vikings did. You can’t stop fighting just because there is something in your way. I often use mythology and history as a backdrop for other things I want to discuss. I’ve always done that. The Great Heathen Army is about when the invading Viking fleet arrived in England in 865 AD. The Vikings had been raiding England for a long time, but this army was something else. It was an invasion army and deadly effective against the British. It’s a massive historical event. It’s fascinating. Somehow, the English won and they defeated the heathen army, so anything is possible!”

Armed with their 12th and arguably finest album to date, Amon Amarth are poised to return to full action with a bloody, broadsword-wielding vengeance. The release of The Great Heathen Army will kick-start another relentless global campaign, commencing with a co-headlining tour of Europe alongside Machine Head and fellow countrymen The Halo Effect. Still ruthlessly devoted to the ways of the warrior, Amon Amarth have Odin’s wind in their sails like never before.

“We’ve always had the mindset to always outdo ourselves and write a stronger album than the previous one,” Hegg concludes. “We always try to do something special with each album, too. Song by song, I think this might be one of the strongest albums we’ve ever made. It was really difficult to agree on the singles for the videos, because everyone had such different opinions. I think that’s a good sign!”