Now Goldberg, Rodionoff, and Zenescope are back at it with Possessive.  “One day while I was hanging out with Hans, we came up with the absurd idea that a drunken loser is so at rock bottom that even an evil spirit takes pity on him,” recalls Goldberg, “They fall in love. And then all Hell breaks loose.”

“The key is you get a bunch of funny people who know how to tell a good story to come together.” said Zenescope’s Ralph Tedesco. “And sometimes you get some brilliantly weird sh*t. That’s Possessive.” 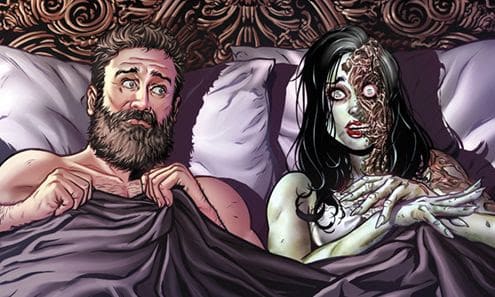 Possessive #1 is 36 pages of story for $5.99 and the first of a three-part limited series. It is currently in May’s Diamond Previews for pre-order and is slated to hit shelves July 21st.