Only pages into Proctor Valley Road, I know I would kill for these girls. About the time they tell some catcalling ass to eat shit and die.

Okeh, I would not murder for them. They are fictional kids. But, I will fight for them. I feel very certain on that.

What I saw, though, from other comics fans, even other horror fans, or Grant Morrison fans, or kid gang fans, was not love, was not a ferocious protectiveness, or half-jumping out of your skin at how cool these girls are – and they are super cool – but, instead, that the comic was childish, that the comic was half-baked, that it was not scary or threatening, even that it was unreasonable for us to believe teenagers could fight a ghostly evil that police have a hard time with.

As far as that last accusation, I ask you, when is the last time you saw police deter malignant ghosts?

I saw an argument that if bullets could not stop the monsters, how could a teenage girl flooring the gas and giving it the grill have any effect? Do the writers and artists of this comic not know physics?

I saw a lot of arguments. I do not really think I saw too many genuine beliefs.

Horror fans, and anyone who has ever seen a movie about a kid gang, knows that the power of a kid believing in themself will always be stronger than bullets from a gun in the hand of an adult. That is genre. That is story.

Proctor Valley Road was compared to any number of young children’s cartoons, and the only comparison I can find is that the comic, like the shows, might be aimed at, well, not at men. Oh noes.

Proctor Valley Road (written by Alex Child and Grant Morrison, drawn and colored by Naomi Franquiz and Tamra Bonvillain, lettered with verve by Jim Campbell) would be a solid R if it was a movie. It’s sweary, gory, violent, there’s danger and horrors and draft dodging. It’s about classism and sexism and nationalism and rock n roll.

The thirty-four year old comic book guy reading this and asking, “What is this, kindergarten?” is not expressing a genuine belief. They are fronting. That is an act. It may come from the gut, they may be shooting from the hip, but they are shooting from a gun manufactured by a culture of misogyny, loaded by the hand of patriarchal ego, and even pre-cocked for them by a lifetime of disdain for gurlz taking up male spaces by stuff like existing and being.

Even the positive reviews say things like, “Set against the idyllic backdrop of ‘70s California,” about a story that invokes the Manson cult in the first pages and the horror of the Draft right after. Pre-trained, pre-chewed responses. There is nothing idyllic about the world these kids live in and the comic makes that clear every page. It is a world of racism, politics, war, misogyny, economics and shame.

“[I]t was filled to the brim with plot conveniences and pseudo girl power,” says one reviewer, because horror movies about kid gangs are never given plot conveniences, and all girl power must be “pseudo”, right? I mean, fuckin gurlz. They continue, “The narrative beats almost made it seem like it was just written as Netflix bait”, ignoring that the comic was literally produced by NBCUniversal. Like, literally literally. 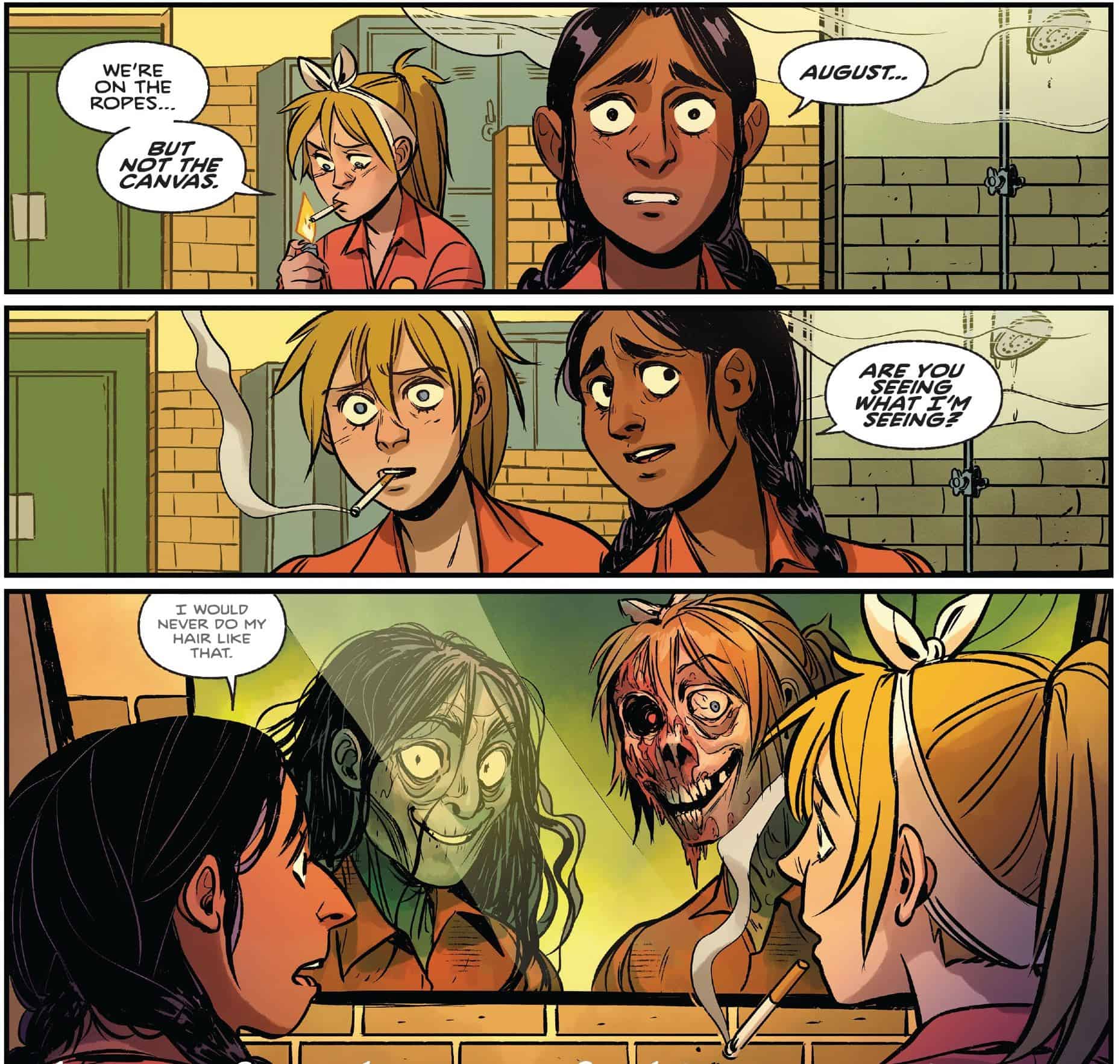 Naomi Franquiz is accused by more than one reviewer, and several social media posts, of ripping of Tales from Harrow County, which, let us be clear, she drew. She was not the only artist, but it feels pretty likely that the parts where the art style reminded these critics of Harrow County were because she drew parts of that comic in her same style.

Not every response is so bad. Loads of folks love the comic.

Mikkel Snyder of Black Nerd Problems declared, “I adore the foreboding chapter title. I adore how quickly everything moves. I adore the interactions with the cast and how the comic manages to cover so much ground so efficiently. It’s an excellent blend and execution of various tropes that make turning the page effortless. It’s a weirdly wonderful book that progressively entrenches us deeper into this world, and if you’re a fan of horror, this is a series you should be reading single issues if you’re capable.”

Some love it but wish the ending had more time. Calling for a sixth issue or a follow-up series have been frequent.

But, there was enough. Enough complaining about “pseudo girl power,” or about how cartoony and childish this comic was that set my jaw sideways. It’s the Ghostbusters drill. It’s the same annoying march they committed to for the Ghostbusters reboot, where everyone was supposed to forget that the franchise had two movies both of which have their issues, and largely built its audience instead of action figure toilets and HI-C juice boxes and Slimer, a ghost who has no name in the movie, but who we all know and love as Slimer because of everything else.

To call it, knee-jerk, is to be too kind.

But, does this explain why I feel like I would kill for these girls?

I will fight for these girls because these girls face this shit every single day, same as we do.

Like the reviews and tweeters who cannot use the correct pronouns for Grant Morrison even after it’s directly pointed out to them, so much of the response is purely numbingly, burningly cultural and cliquish. It is the geek equivalent of owning the libs. And, please, let us never pretend large chunks of geek culture are not massively conservative, if not cap-C Conservative. 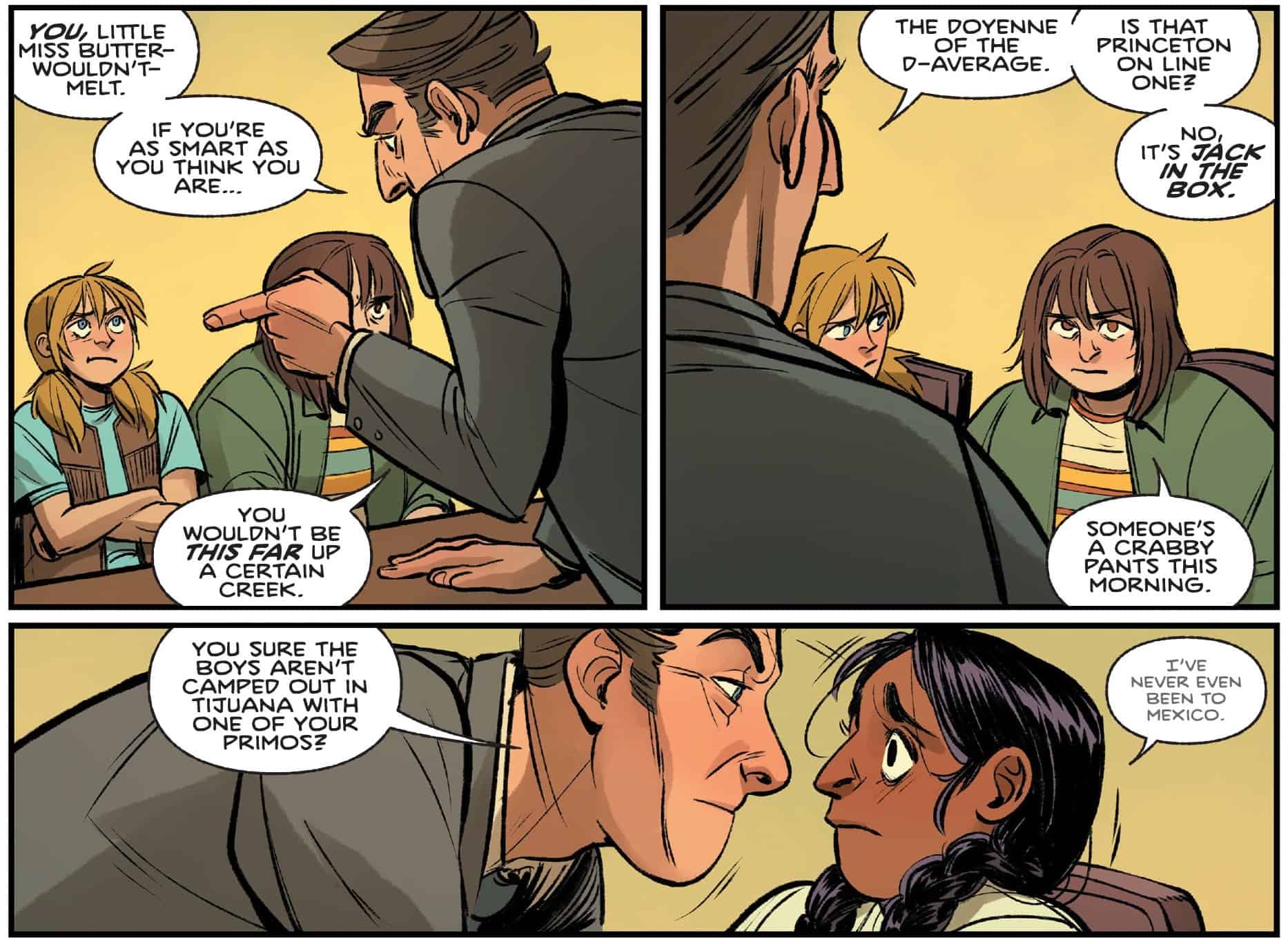 The comics community, like the horror community and anglophone communities, is thick with the sensibilities and regressions of an old boys network. The school, police, and military systems that threaten youth in Proctor Valley Road are the same which threaten youth today. The moral ambivalence and passive aggressive shifting of blame which state and politic operate under in the guise of efficacy, realpolitik, and maturity are the same that haunt the Earth and in this case, America and California in real time and right now.

There are many reasons for me to feel defensive, to feel protective of Proctor Valley Road. Identifying with the protagonists? There’s more than one awesome trans genius working on this comic? It’s scary AF? That amazing 70s Nancy Drew meets Scooby-Doo meets Jack Kirby kid gangs vibe? Because it’s another dig at systemic bigotry and colonization by Morrison? Exceptionally strong work by Alex Child? Because Naomi Franquiz can draw anything and sell it? Because Tamra Bonvillain blows up the world with her colors? The politics? The energy? The awesome and expressive lettering and the potent and engaging tone? Because fuck the Man and fuck the Man’s war? Because a bunch of small town girls scrounging money to see Janis is cool?