Rachel Pollack and New Gods in the Nineties

“How can we ever know what real and false actually mean,” asks Superman after brief and eternal odyssey with embodied ideals. 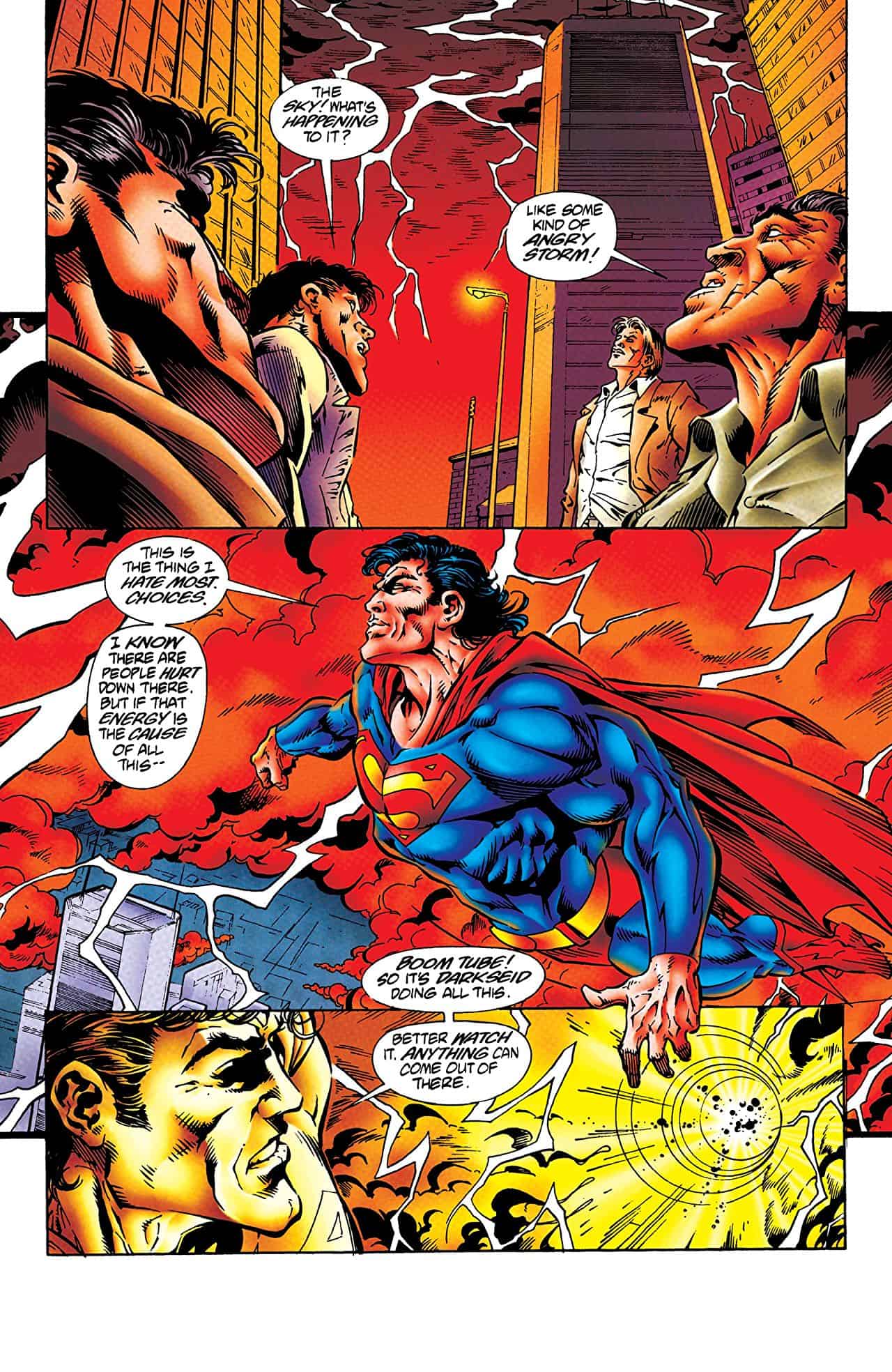 Superman is in this. Bear with us superhero fan, you’ll be alright.

My love of Jack Kirby’s Fourth World comics, his New Gods mythos, is only one part of why it bothers me so much that any time a woman has written them, the “fans” get more bent out of shape than otherwise. And, be honest, “otherwise,” is still pretty bent. New Gods fans are picky and prickly about it. The 1995 New Gods series, which would eventually be taken over by more traditional-revisionist John Byrne, launched with Tom Peyer, Rachel Pollack, and Luke Ross, with Pollack and Ross handling the most of the first eight of eleven issues. Ross’ art is heavy on grit teeth, angry eyes, and dutch angles. Peyer was notable, at the time, for a sort of hipster vibrancy, and Pollack notable for being one of the original writers of the Vertigo imprint and a successful tarot scholar and writer outside of comics. On the surface, all of this was going to rub classicists wrong (and it did). The shifting talent, always guided by Pollack, include Keith Giffen and Dean Zachary, Patricia Mulvihill.

The first issue does not shy from quiet excess, with a relatively loyal summary of three pages and then blood on a torture rack, naked children with the rare un-erased genitalia, and the quick facade of power and dominance taken off some of the evil gods, Granny Goodness, Desaad, Darkseid, to reveal cowardice and bile. Symbolism is as naked as the exaggerated emotions, characters smiling broadly, bug-eyed terrified, abounding guillotines and snakes, invocations of mothers, fathers, dark fathers and bad mothers.

Darkseid, the head evil god, rules a planet of gods and god-things, almost all horrible, evil, vile. The troops of Darkseid, in this run, are particularly obsessed with consumption, with cannibalism, with being consumed by fire, by purchase and ownership of people

Early in the run, we see Darkseid and his son, Orion, the warrior god, who has been adopted out and raised by the good gods to be their strong arm, taking on various forms. They are a thief and police (ending in the officer’s death),  good mother murdering her evil child, both within Darkseid, as Darkseid himself, which results in righteous suicide. They are tides and thunder claps. This is the first notable and clear example of these gods as, not individuated people, but first and foremost, understandings given humanoid form.

With Atinai, we see that gods are malleable even causally, even in what they represent and evoke. She was once, “the pure,” now a goddess of cities  and gentrification. And, from there, other gods want to repurpose her, again, as a goddess of asylums. Not of asylum, but of the imprisonment of the unhealthy, the unfit, the mentally and socially unwell.

Orion, on the other hand, warrior god turned beast and beast of burden and hunt, reaffirms himself as warrior, as emblem of soldier, invocation of soldier.

A traditional argument against all non-Kirby versions of Darkseid is that they are over or underpowered, and that they represent the wrong things. This take is disqualified for being about hate, this about bullying, about total evil or too specific a sort. Popular rhetoric holds that Darkseid represents fascism, only fascism, and fascism cannot be elaborated on or specified as indicative of anything else. When you look at Jack Kirby’s use of the character, comic to comic, title to title, Darkseid is not really fronting the same, specific mode or metaphor in every comic. Sometimes, he is the gangster making himself comfortable on your couch. Sometimes, Darkseid is the schoolyard or workplace bully. Sometimes, simply, Darkseid is.

In this version of New Gods, Darkseid is the bad dad, he is a religious icon, he is even an aspirational figure. “Of all the gods in the firmament,” as says Metron, god of science or examination and cataloguing, “who could bully their way into the heart of existence?!” In terms of Kirby, himself, Darkseid represents some things more clearly in Forever People and some other things in Super Powers or The Pact. Here he is bully, he is father, he is blaspheme itself.

All this is pretty particular to long-term or traditionalist fans, but the comic also introduces new levels to these god societies, including “the Primitives,” near-naked brown-skinned gods in sort of carnival-Indigenous costumes with disco-Indian–dayglo fringe and massive amounts of tattoos. They have “bound their lives to nature” and live below the good gods (the evil gods all live on another planet).

There are two ways, both valid, to approach this. It is insanely racist caricature and condescension from the lingering 90s rave and commune culture’s fetishization of Indigenous mystique and trappings. It is a representation, as all these gods are, of then-contemporary American culture, and this is how America valorizes, others, and sublimates Indigenous presence.

These characters, these dynamics and appearances have always been so affected. The hippie fallout informed every bit of the original Forever People designs, biker culture and movies and television demonstrating skewed versions of biker culture present themselves blatantly in the connected Jimmy Olsen stories. The inker on Mr Miracle has openly copped to thinning the limbs of Big Barda, but being told by Kirby to leave her face alone.

The Primitives arrive as if they have always been, but as idea-forms, “always been,” is a less causal deal than it may seem. Close on the heels of their introduction is the drunken fall of the good gods, the new gods falling into angry, spiteful drink, and then those gods must reconcile their goodness with how much they enjoyed being inebriated, how much they enjoyed being jerks.

There are women who aren’t soldiers or dancers?

While the good new gods and the new Primitives are treated as exalted sky deities and forgotten earth gods, remember that in 1995, this was the pop myth of the day, this was the explosion of cosmic christ books, self help dream time lies, DMT being dropped in conversations like the bomb it was expected to be in chemical and spiritual form.

“We are not killers,” says the good father, the hypocrite and condescender but well-meaning Highfather, as he strikes a Primitive in the head with the staff he uses to lead and guide. Male hypocrisy, even white male (American) hypocrisy is not alien or denied in these comics. Highfather, infected as he is by this drunken badness, acknowledges they are the same as he, they are equals, all, but then calls them “apes,” and “primitive.” He also finds, below, near the ground, his double, in an old-woman, nearly toothless, her staff not a shepherd’s but decorated with a snake-bird motif, almost purely ritual in ways he might not admit – we might not readily admit –  so, too, is his.

Highfather needs wisdom from this wise woman, and the wise woman of 1995 gets him high and gives to him visions. When he needs clarity, he goes to a mental hospital that is like a prison on Earth, first to speak with an uncontrollably emotional man-child, Amygdala, for the smug con artist, the Riddler, to decry and educate doctors, to be laughed at by legal representative gone bad, Two-Face.

The flip side, is Darkseid staying home. He visits, in his homelands, his “devil’s hidden paradise.” While Darkseid oversees hate and “rules decay,” there is in this hidden place of his, the small, big-eyed, innocent-seeming Pythia, the youth to the crone visited by Highfather, with her parrot and her flowers.

The smile, the eyes, the quotes nobody can see around “Lord.”

Traditionally, who would be the highest, the elder of the female gods are removed in these tales. Avia, beloved of Highfather, essentially the mother goddess, is dead, only to be resurrected at all in retellings or fairly recently in The Multiversity for a panel or two. Even young goddesses are murdered or disappeared. This oracle, or these, if there are truly two, are as radical a repositioning of power as any, and quashed from use soon after this run.

When it is revealed that Orion, son of Darkseid, raised by Highfather, has become, in viciousness, a body containing himself and his father, and that the Darkseid we have followed, in name and look, for issues, is Desaad, the god of sadism and unacknowledged masochism, wearing a kingly mask, rather than a moment of reevaluation for all involved, they stay true to their adopted, now knowingly tainted roles. There is a sickness in these representations, a bend to the mirror, a flaw in the flue, but they stick right to it. The engine produces the sick smoke it is meant to. Gods as a catalytic converter patch.

It is Highfather, himself, who stays most committed, intriguingly, no longer the emblem of fatherly good intent, but the awareness of an old man’s hypocrisy, tormented “with all the secret memories of his life,” as he attempts to lock himself away in the asylum he has had built.

It is Darkseid, like the owl of ill will in the desert, tempting Christ, who comes to the asylum and talks Highfather into opening it up a bit.  While not a superhero comic, this volume of New Gods brings in both Batman villains like Amygdala and Two-Face, and that highest and first of superheroes, Superman. Superman, so above us in power and perspective, is forced to see the world as a god might, vast time, vast life and vast death. Through Superman, we can realize how large and how embracing the concerns of these gods are. They are living and enacting not abstract ideas, but embedded ideas, concepts in play, concepts in truth.

As the gods begin to seem too big to judge, too ancient, to fresh, to all-consuming, we see them revert to form, to understandable, base, basic forms. Darkseid betrays. Highfather guides while wondering if his guidance is sufficient. Mother Herrae hopes well. Desaad quietly supplicates. The multi-limbed, green-yellow foreign monster-god, S’ivaa is put out to space and punched.

“Did you really think your spiritual surrender could equal the power,” asks Darkseid, “of pure will?”

Darkseid’s pure will is knocked like a novelty sticky-hand against the source wall, Highfather surrendering himself alongside, protecting all else. S’ivaa, ignorant, old, confused and enraged, is calcified by the very concept of wall. What do we build walls for, after all, but to keep out and to keep out monsters?

There is no justice or defense of Darkseid’s evil, of abuse, of slavery. There is no appreciable cost to freedom, to forgiveness, to moving on. Even in 1995 America, when the competing camps of enlightenment might as well have been  big doses of drugs or recent reruns of Seinfeld, cruelty is only unfairly excused and cost, overrated.

The next panel, all this is torn down.

Rachel Pollack and New Gods in the Nineties