Jessica Jemalem Ginting is a comic writer, poet, translator, essayist and editor. Creator of the Indonesian superhero webcomic ROSANA! and the zine UTOPIA: a remix zine, her poetry collection Voyages has been recently published by Bottlecap Press, and she also runs a YouTube channel where she talks all kinds of nerd and poetry stuff. Our own journalist Duna had the luck of sitting with her to chat all her work from comics to poetry to fandom, and here’s the result. 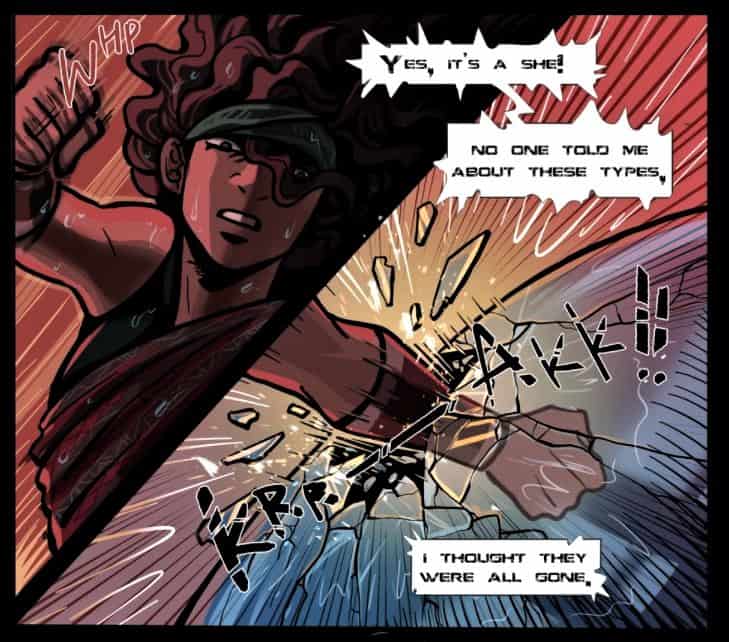 Comic Watch: Hi Jessica! Thank you so much for chatting with us at Comic Watch! First of all, can you tell us a little bit about ROSANA!, how it was born and how is the process of reaching out to and working with so many different Indonesian creatives?

Jessica J Ginting: Thanks for giving me the chance to talk about ROSANA! on Comic Watch, Duna. So, what we’ve done is create an original Indonesian superhero named Rosana – and the comic is all about building her lore and her universe from the ground up.

Indonesian superheroes have been experiencing a revival over the past few years. We have our own version of the Marvel Cinematic Universe, run by a company called Bumilangit, where all of their superheroes exist in this shared universe. ROSANA! began almost in parallel with this, around 2019. I began conceptualizing it about a year before then. I always cite Black Panther (2018) as one of my earliest influences for the comic, because the way Ryan Coogler blended the traditional African cultural elements with elements of science fiction, was something I’ve always wanted to do in an Indonesian context.

I work with a team of Indonesian artists based globally on different chapters of this comic. It’s all completely remote and it’s a great collaborative process. I remember putting out a call for applications initially on Twitter and it gained so much traction. Everyone who applied was so excited about being able to contribute to be able to work on a ‘homegrown’ superhero project, so to speak. Rosana’s story is still so new and there are still so many unanswered questions about who she is, what kind of superhero she’s going to become, because we haven’t even gotten to that part yet!

CW: Right from the start, ROSANA! deals centrally with colonialist violence and resistance, put within a sci-fi and superhero-ish element. What are the influences on how to bring these themes into the comic?

JJG: From the beginning, I knew I wanted this to be a science fiction story. Even though we’re dealing with Rosana’s everyday life and struggles that don’t seem too far removed from our reality — that’s part of the ‘speculative’ angle I wanted to explore. Even in societies where we’ve progressed to the point of being able to travel into outer space, I think we’re still likely to face a lot of the same problems we do now. Most sci-fi stories deal with colonialism, violence and resistance — just with a different galaxy in the background. With Indonesia, you don’t have to look far to see what issues are currently plaguing different communities.

In terms of influences, I’ve taken inspiration from a variety of post-apocalyptic, Western, eco-political and feminist media. All of these informed either the subject matter or the tone of the comic in some way: Mad Max: Fury Road, Marlina the Murderer in Four Acts, Logan, Edward Abbey’s The Monkey Wrench Gang, Alan Moore and Dave Gibbons’ Watchmen. 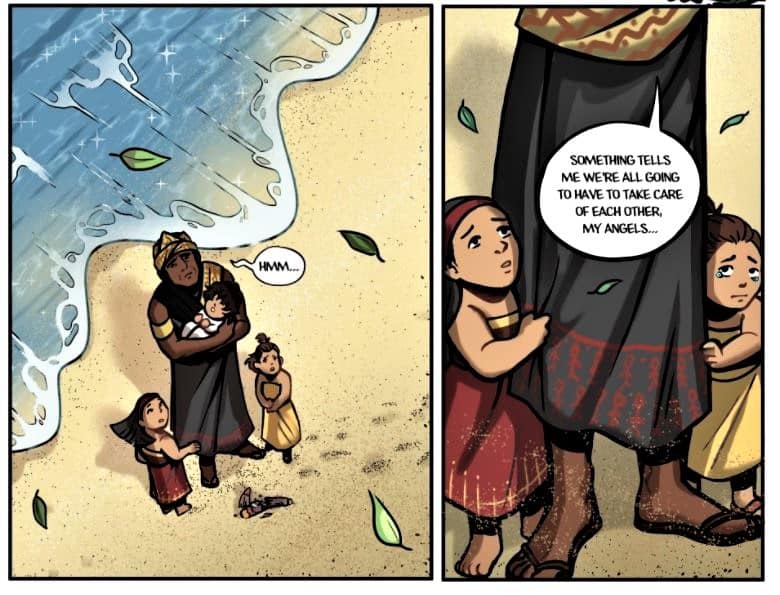 CW: Your poetry book, Voyages, revolves around mythology, religion, family, love, to end in some sci-fi apocalyptic last pages of a world we might live in. In this, the book navigates some kind of mixed zone between poetry and tale/s. Is this narrative shift on purpose? How have these poems been put together?

JJG: Voyages was initially conceptualized as an almost narrative-based poetry book — whereby it was a collection of poems told from different perspectives by these characters in a sci-fi setting. So, that became a little too complicated and it didn’t feel like I was being authentic enough.

In terms of the wide range of topics, I realized that these were the kinds of things I love writing about, even though they might not be ‘traditional’ poetic subjects. I don’t know if it feels scattered or cohesive to the average reader, but a part of that process of authenticity for me was accepting that wide range of places that my writing takes me, and maintaining the confidence to kind of say, this is exactly what it needs to be. My next job was pulling the threads together and really selecting the ones I thought would really serve the story I was trying to build in the chapbook.

Structurally, the collection is divided into three sections: part one is this kind of new-world mythos building area, where humanity’s just waking up and asking all these questions about where we are and where we’re going; part two is very much rooted in the present of my life, but I think it’s kind of the place where you forget you’re going anywhere–there’s a sense of stillness in it; part three, on the other hand, goes full-speed ahead into this almost unrecognizable, apocalyptic future, to put it dramatically.

CW: I especially adore the love poems on Voyages, as there’s an everyday/casual vibe around them that contrasts with some of the other heavier themes (like climate change, memory or trauma). Do you have any specific LGBTQ+ poets that inspire you? Or anything you wanted to convey with this mix of mundane and acute?

JJG: Thank you! That’s definitely the vibe I was going for with the way I tried to structure the poems, individually, and as a whole collection. I like zooming into intimate moments against a very chaotic, or ‘heavy’ background, as you put it, that the background itself feels kind of muted even when it shapes the context of the smaller moments.

Some of my favourite LGBT+ poets right now include: Natalie Diaz, Norman Erikson Pasaribu, Benjamin Garcia, Tom Denbigh and anyone published by fourteenpoems, a London-based publisher for queer poetry. Elizabeth Bishop is another one of my earliest influences. Her poems really do a fantastic job of drawing out little details from the mundane as she narrates these experiences or observations with an inquisitive, yet also sometimes mysterious, tone. 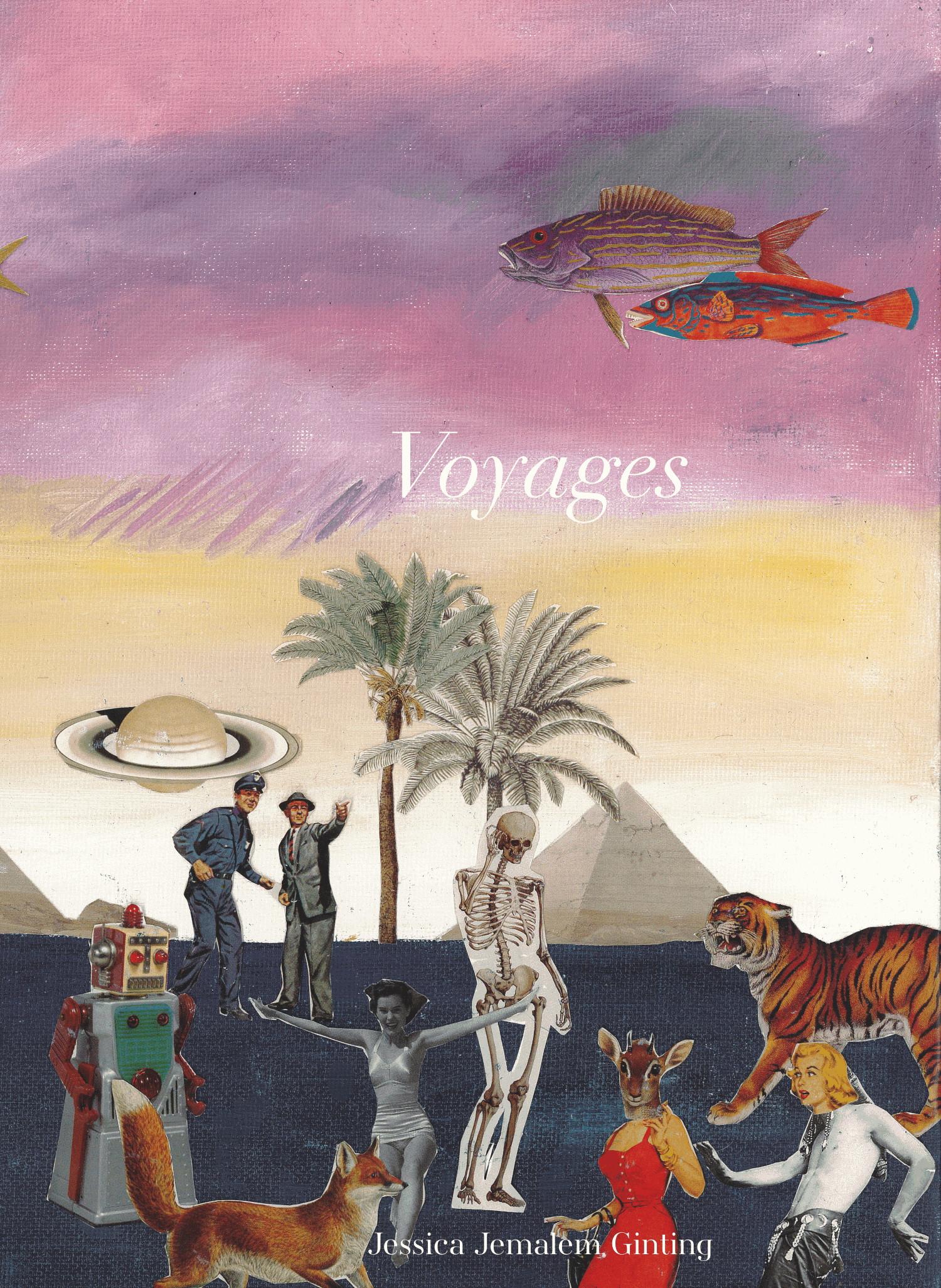 CW: In your YouTube channel, you do comics and books reviews yourself, as well as general fandom commentary, and a series of episodes talking ALL Zatanna appearances, focusing on her powers, dress designs, relationships, emotional arcs… Why Zatanna? And what does that channel bring to your creative process?

JJG:This is going to be the most biased answer I could give, but I truly do think that Zatanna is the quintessential superhero. She very outwardly embraces all of these qualities of a lot of typical superheroes and ramps it up to a hundred: the theatrics, the meta-aspect of the way she performs stage magic but does real magic, the alliterative name (!) and the fact that I think her character can work in any context, from darker comics to more light-hearted ones.

Regarding my general YouTube channel, I actually do struggle to keep up with it. It’s difficult for me to prioritize it with my full-time day job, other voluntary work and the writing I do regularly (I do spend a big chunk of my time doing it every day) — and with the whole ‘growth mindset’ that’s so pervasive on YouTube, I often feel like I don’t really belong on this platform that’s meant to encourage people to like maximize output, gain a million subscribers and monetize every little thing.

However, that being said, the Zatanna series has become kind of my anchor to the platform, because I figured out that I’d be happy to talk about her for a very long time. My goal is to cover every single comic book she’s been featured in with no time limit or real goal as to when those will come out, so I feel like it’s alleviated the stress in me being like, I have nothing to make my next video about, because then I could always talk about her! My YouTube channel was meant to be my outlet where I just had a bit of fun talking about the things I wanted to talk about. I really do love and appreciate the small community of people who have come and gone and listened to my takes on things.

CW: That’s lovely! And, last, what are you working on lately? What’s on your table?

JJG: I vowed to make myself pause on my creative projects since launching my chapbook, but the creative brain does not work that way, I have learned.

I am very excited to announce that my friend Ren and I have launched Koening Zine, a zine for Asian creatives. We opened for submissions earlier in August and submissions for our horror-themed issue, closes on September 13. We’re hoping to get the first issue ready by Halloween, so that’ll be my next major project! You can find us on @koeningzine on Instagram and Twitter.