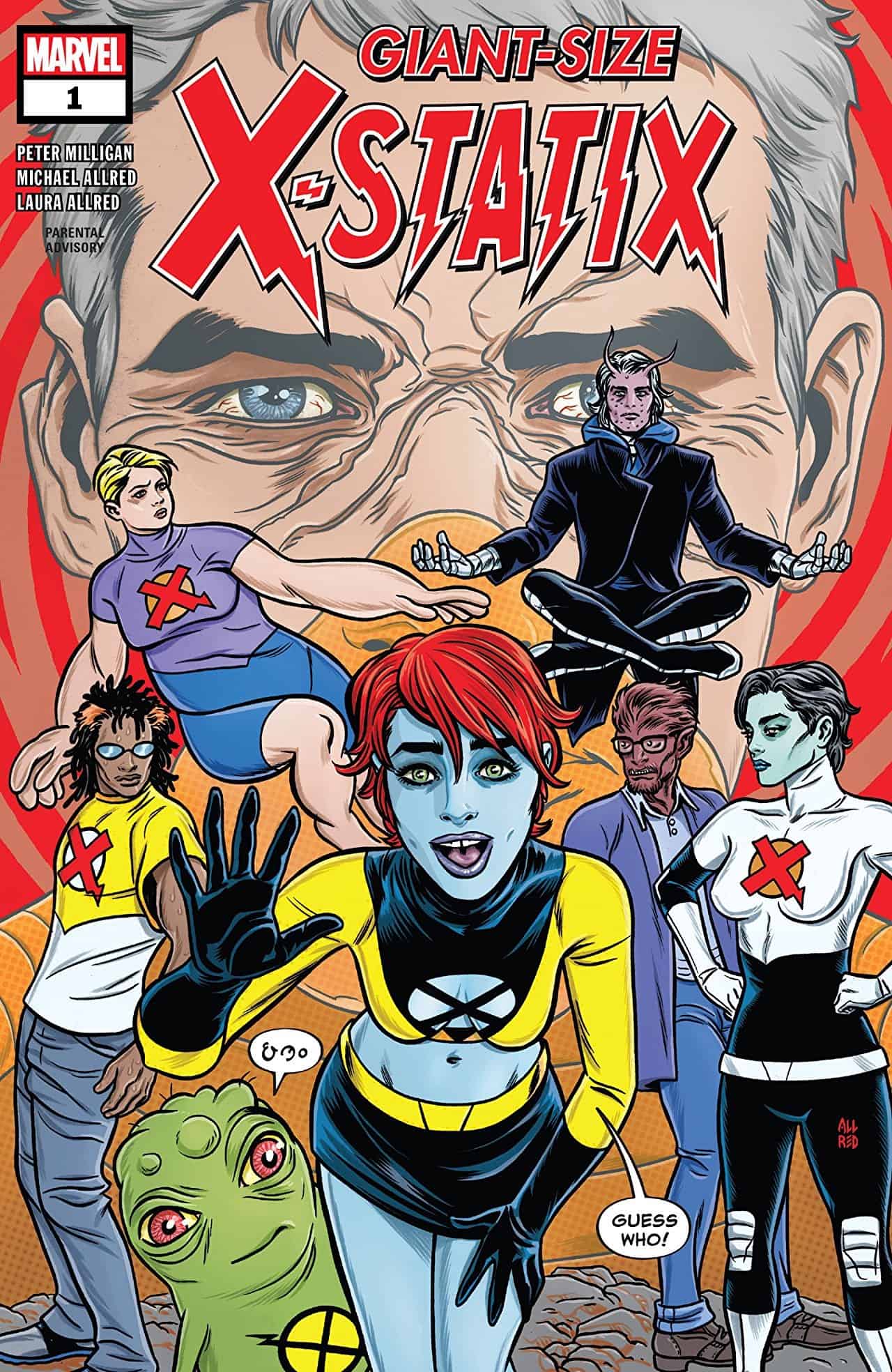 Giant-Size X-Statix, or Hereditary-X (story title) is a liminal, difficult to place comic that is open, fun, inviting, and a blast. Brought to you by geniuses of comics with a halo of revival and pop passion glee, it sits away and between all the other things, the other X-Men related comics, the Marvel universe, it’s predecessor titles, the Doop mini and the random Gin Genie shoutout in a cameo-laden comic whose title we can’t remember.

Patricia Highsmash
Stay Liminal, the X-Statix are Back
by Travis Hedge Coke

Hereditary-X is its own thing and a thing between. The traditional X-Statix team of Michael Allred, Peter Milligan, and Laura Allred revisiting characters that spun off from a remarkable X-Force run and then kind of collapsed a tad under editorial interference, until punctuated revivals of this character (Dead Girl!) or that (Doop!) would throw another sheen of glitter and polish on those fine surfaces and remind us this is a thing that is fun to look at. It opens with the old school characters, once so shocking and vibratory in their newness, now figures of nostalgia and sweet reminder we too once thought we were hip. It traces the familiar route of “Who will survive!?!” tongue in cheek intensity. It ends with some powerful bombs of its own. A collage, a symbol-laden surface that is flat and opaque, but also not the side you are supposed to look at, just like the back of the screen of Katie Jones’ laptop.

Katie watches the laptop screen, showing us the back, hanging to the glory days of the old team her sister was in, where did they go documentaries. She dates a guy with “an inexplicable love of death metal,” and gets middling grades in school, before passing through the veil one night and meeting Dead Girl, who is dead, her dead sister, U-Go Girl, who is actually her mom (and her sister?), and Doop, the floating green lumpy camera operator of love. Two dead young women and a green potato who speaks in a substitution code.

“You can’t go yet,” says Katie to the dissipating ghost of her mother-sister, “I haven’t finished being mad at you!” She is mad at Dead Girl for promising her four minutes with said mother-sister and getting far less because of technical glitches.

X-Statix is technical glitches. The best Michael Allred comics leave you unsure if anything was intended to make you feel the way it makes you feel. Was the scene you laughed at funny? Was that heartache real in the book, or just in you? Does Mike Allred really believe coffee will make beatniks hallucinate unto riot? 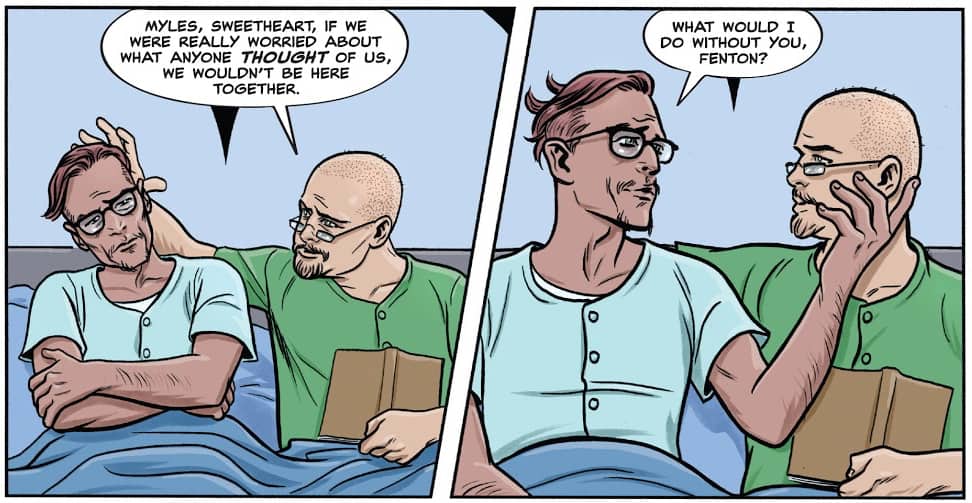 Laura Allred truly brings in the reality, of anyone. Her tones and tints are understatedly true. She can bring a physicality with her colors, and a sense of full world, from sun to flesh to smells and dread.

Peter Milligan has always laid his stories equally in veracity and farce. Peter Milligan wrote the first openly homosexual kiss in a DC comic and a Marvel comic, and lest we forget, that Marvel comic was an early issue of the X-Force run that begat X-Statix. And, one of the kissers was a big pink hulk in San Francisco, called the Bloke.

Are you sure you know how you feel about that even now?

Katie’s going to be swept up with a new generation of mutants in a new vision of what this X-Force/X-Statix/the future stream of comics can be.

Is this a joke? Is it commercialism? Art? Farce? Hello, life! you’re a bit dumb.

“We still need a third act,” says old guard, the Orphan, the X-Statix team leader called, Guy. “But, I don’t have the strength or courage to do X-Statix again.”

The old team got old. Our training as comics readers tells us that this book takes place now, and ties into the Marvel Universe, but how can there be a whole generation of booming teenaged born from characters who were, themselves, young not too long ago? Is Spider-Man fifty now? Where is the chronology!?! Pink sugar continuity heart attack!

How does this fit? How do I fit? What is role?! 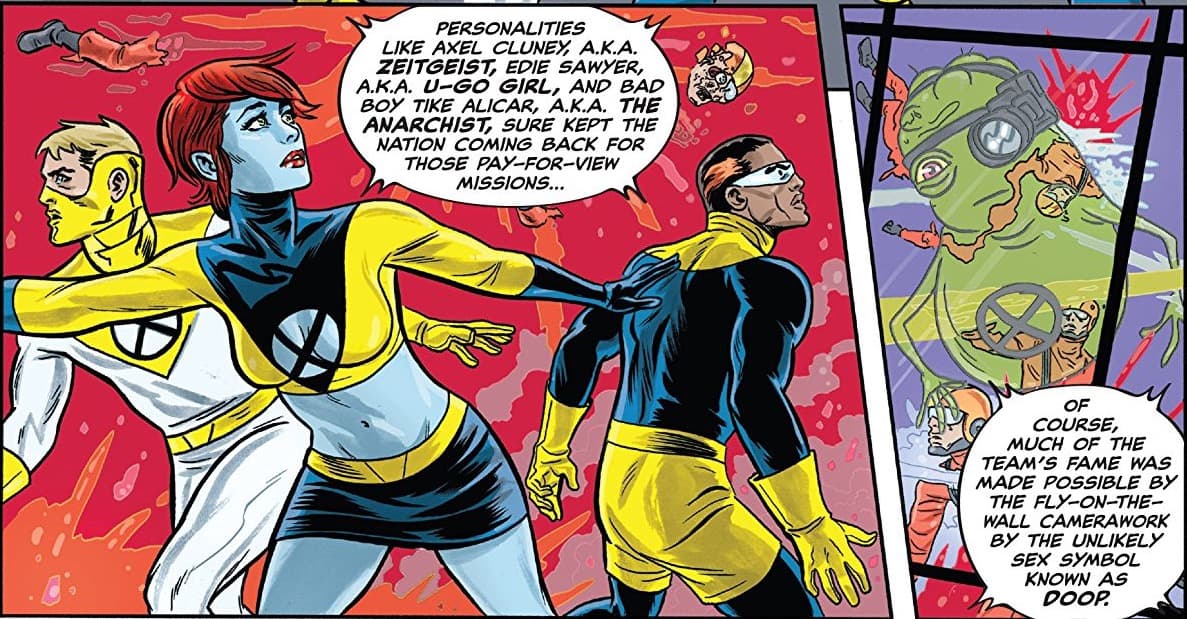 This is an amazing give a damn comic that is also pop glib candy gum. It is a comic that can only be explained with italics, excessive punctuation, and a dance around the edges to not give too much away. You’re either in or you’re out, and you’ll only need a few pages to be sure.

And, this comic? Giant-Size X-Statix or Hereditary-X, this is not the third act, in that X-Force/X-Statix/what next train. The X-Cellent is, and it’s out next year.

NEWS WATCH: DISCOVER THE FATE OF THE INFINITY STONES IN THE STARTLING CONCLUSION OF INFINITE DESTINIES!
May 11, 2021
Recent News & Reviews