Set throughout Latin America in the 2490s, MAÑANA: Latinx Comics From The 25th Century (available now in English & Spanish) presents readers with a radical array of futures, ranging from post-apocalypse, to liberationist utopia, to slice-of-life magical realism. With 270+ pages of comics featuring 27 young-adult sci-fi stories by Latinx creators throughout the US and Latin America, Joamette Gil is the editor behind such a massive project, as well as head of Power & Magic Press, the publisher of MAÑANA. Joamette is also a creator, illustrator and letterer in multiple other projects. Our own journalist Duna had the luck of talking with Joamette about MAÑANA, its inception, editorial process, range of diverse visions for the future, and more. Here’s the result. 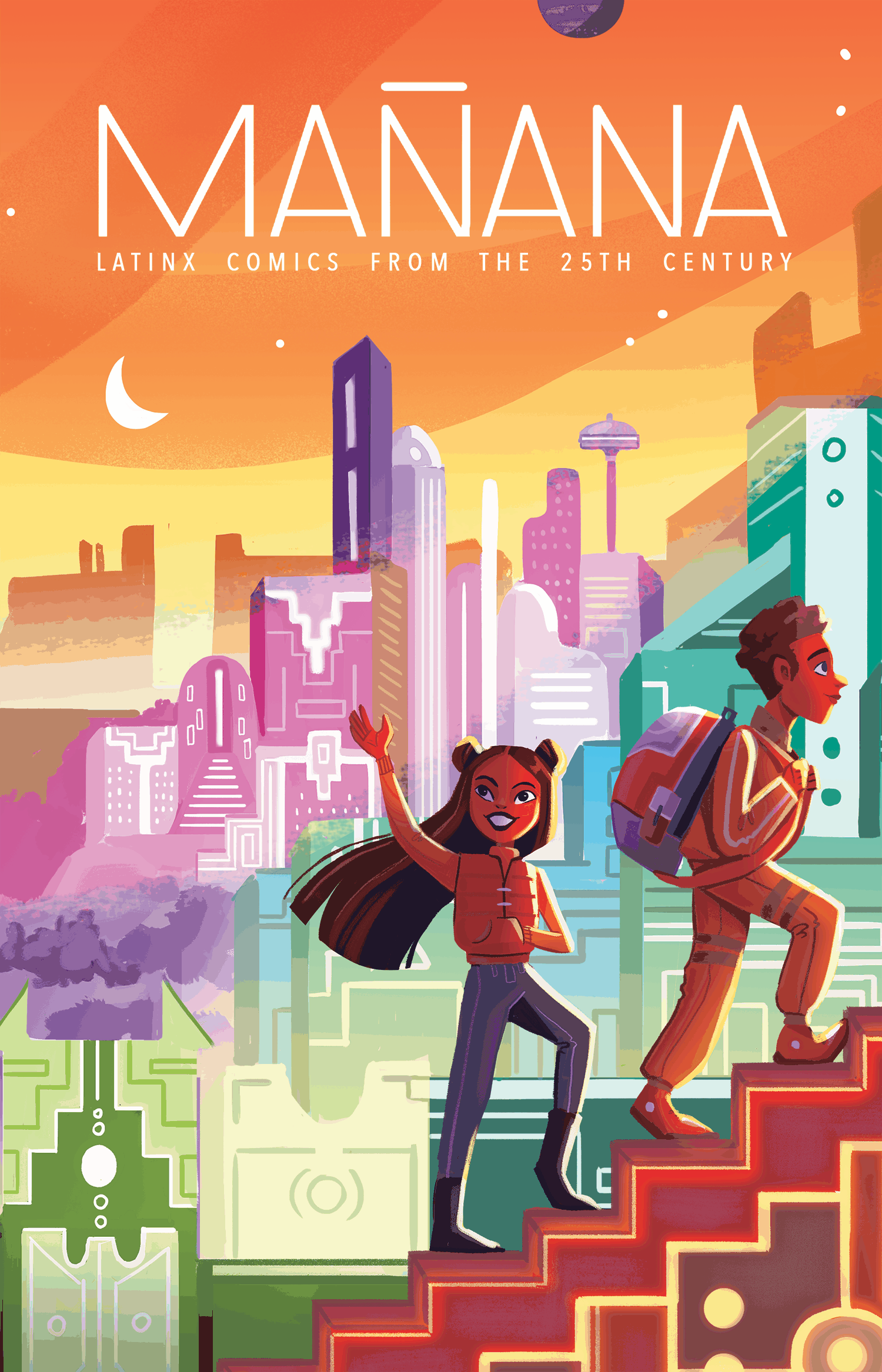 Comic Watch: Thank you so much for talking with us, Joamette! Well, first of all, can you tell us where the idea for MAÑANA came from, and what are the things that helped it flourish into the 50+ creators anthology we’re getting?

Joamette Gil: MAÑANA, as a concept, was born from two disparate places: the excitement I witnessed in my fellow Latines when Star Wars started casting more Latine actors, and the hopelessness I felt over the child separation crisis at the border. Our imaginings are about the stars and the future, but our realities are complicated by violence and trauma, causing many of us to doubt we have a future. I wanted this anthology to reflect as many different Latin American cultures as possible, and as many versions of the future as possible, so we changed up our usual submission process to allow writers who can’t draw into the mix! We did the work of pairing writers with artist applicants, and the result was the biggest creative team we’ve ever worked with at P&M Press.

CW: You’re the main editor and publisher at Power & Magic Press, the press behind publishing MAÑANA. How did that project start?

JG: P&M Press started in early 2016 with the call for submissions for POWER & MAGIC: The Queer Witch Comics Anthology. In a nutshell, I wasn’t satisfied with my experience working in comics up until that point, particularly the low pay. P&M Press is my way of giving other BIPOC and queer creators the chance to work on projects that center their experiences, treat them with respect, and pay them fairly. 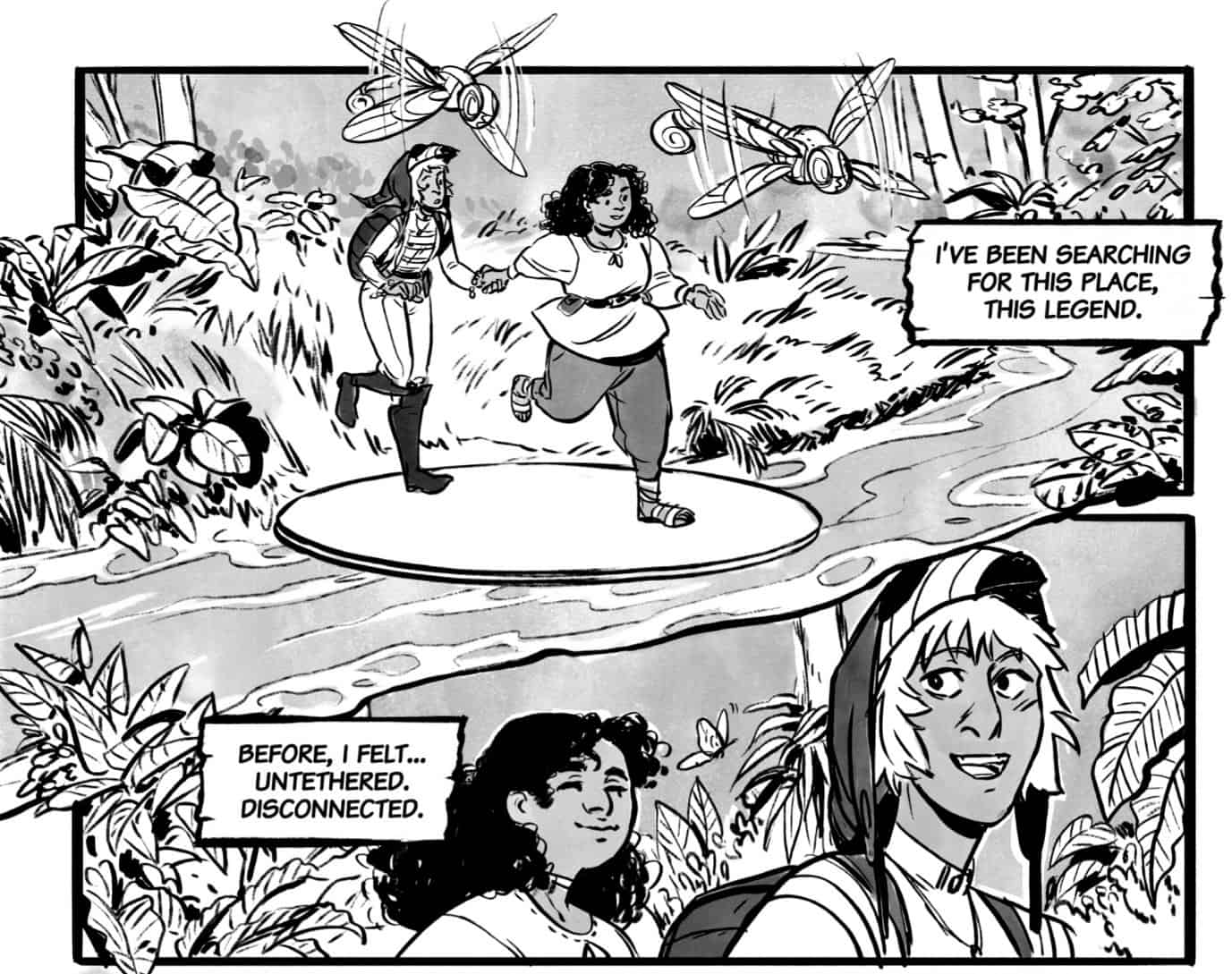 CW: I’ve noticed the focus on LGBT+ creators and creators at other intersections in both MAÑANA and the other anthologies of the press. What do these diverse perspectives – sometimes in multiple ways – bring to the books?

JG: They’re the beating heart of our press! Adequate representation by/for/of marginalized people has never existed in the Americas. The most well-known and trite story can become instantly fascinating by simply inserting a BIPOC or a queer person, because that’s how rare it stil is to see us centered in any media. But beyond adding ourselves to the narratives we already know, BIPOC and LGBTQIA+ people have wholly original experiences and perspectives that haven’t been told to a massive audience yet, at all. That’s what P&M Press is interested in: the freedom of marginalized creators to invent and reinvent freely.

CW: Most visions of sci-fi hegemonic narratives (white, rich, European, men) focus either on a future completely detached from the past (a “progress”) or a future that repeats the past failures, specifically. In MAÑANA, we have connections to the past that feel way more enriching from the past and looking at it in whole different ways. How do you think these voices can bring something different and important to sci-fi?

JG: The stories in MAÑANA span many different visions of the future, some wholly utopian and some… rather bleak! The darker futures always contain a seed of hope, though, if not a way forward out of potential catastrophe. Ultimately, every story is very human, focusing on the impact of the future on people’s bodies, relationships, work lives, faiths, lifestyles, and philosophies. The past is ever-present, as it informs what each character values, how they live, what they’ve never known, and which choices were mistakes. In that sense, it’s a very Latine book. The shadows of colonization, capitalism, and environmental destruction are there, as is the light of revolution, indigenous survival, and Black joy. 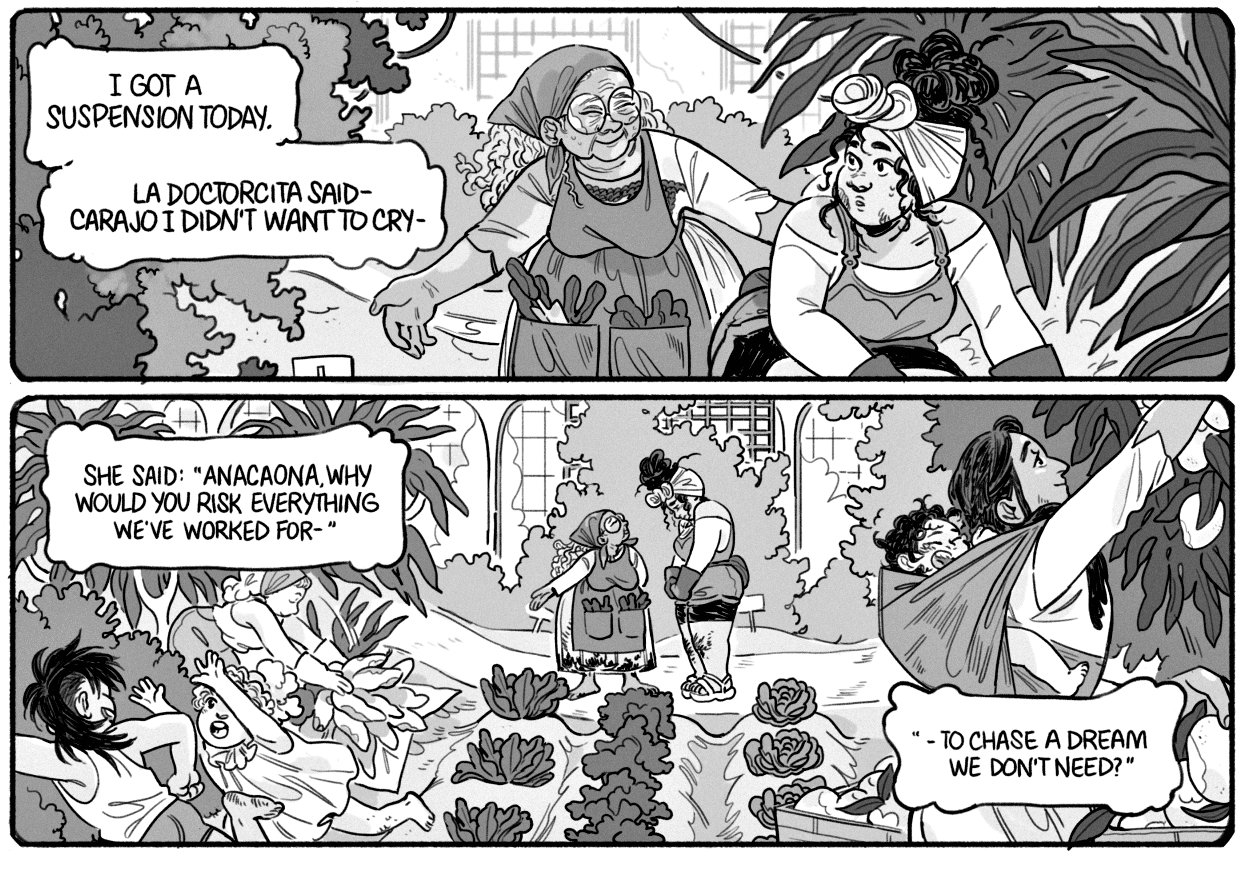 CW: Some comparisons have been made of how a lot of visions of dystopian fiction in pop culture tend to make their “outrageous, horrible future” be made from building blocks that many BIPOC already relate to – poverty, oppression, focus on survival rather than passion. In which ways do you think this Latine authored futuristic story challenges that vision?

JG: MAÑANA challenges that by having no interest in “horrible futures” for the sake of teaching empathy or issuing a warning to the reader to “beware the consequences!” Whenever the future is less than perfect, our characters either use their ingenuity to survive and thrive together nonetheless (sound familiar?), or the story is about our characters learning something about life under the circumstances. For example, in “A Dream Of A Thousand Stars” by Alberto Rayo and Sebastian Carrillo, the indigenous people of the Andes are the ones who master interstellar travel and harness the power of multiple suns… which leads to very, very big social problems. The story follows two queer Andean women (a scientist and a soldier) on a mission to save all life. It merges themes of human potential, hubris, cooperation, and religious strife, set in a future scenario that would absolutely be frightful. 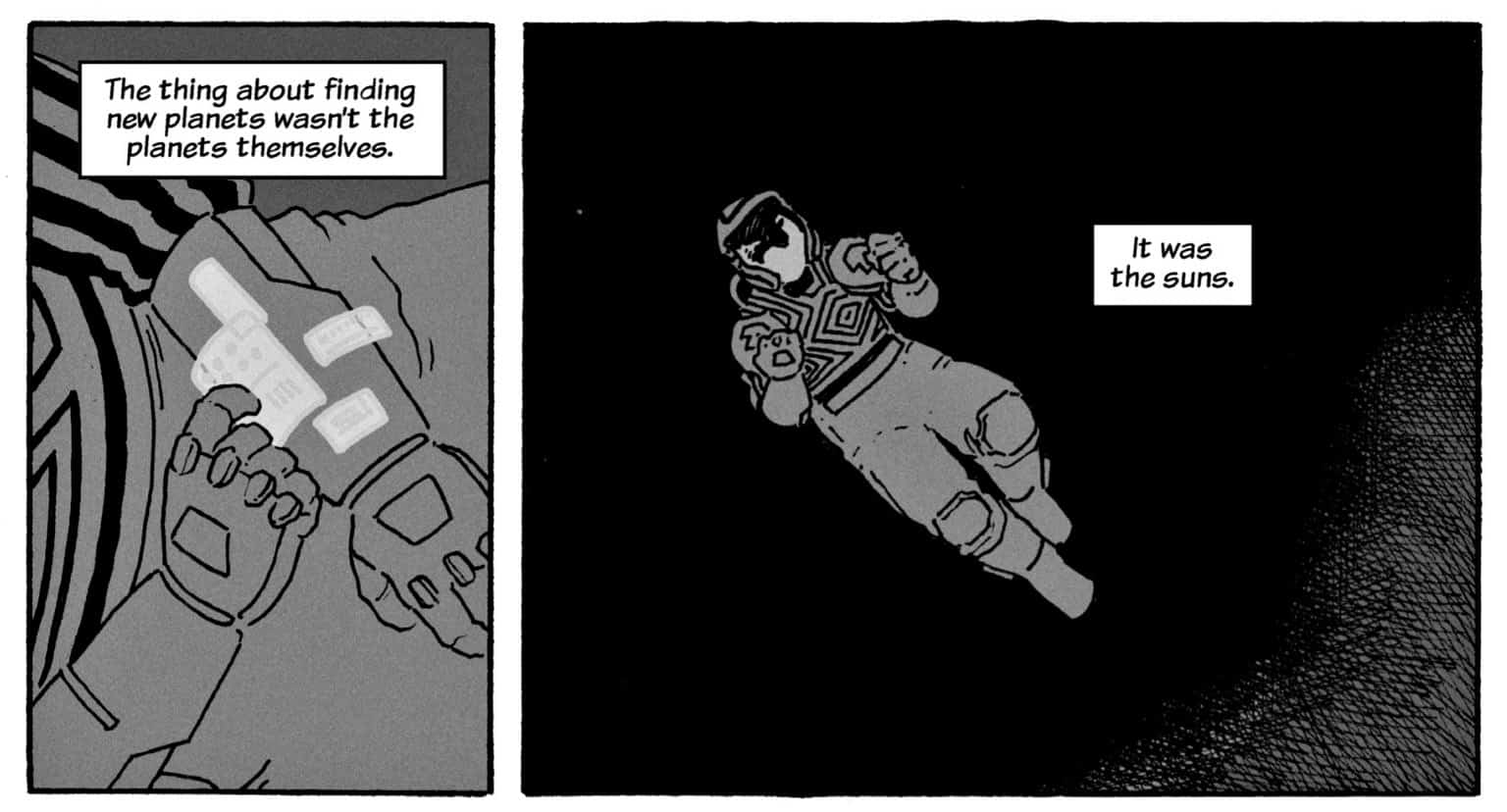 CW: Being the editor of the book, how did you approach your writers tackling themes that are somehow related to the land and its people (even if it’s a vast land and a vast amount of cultures)? Do you think this is different from editing a supposedly “purely” fictional book?

JG: Great question! I decided early on that I would not accept story pitches set anywhere that the creators were not from or had never lived. The rest isn’t actually too different from how I would edit anything, fictional or not. One of my jobs as editor, in my opinion, is to read up and ask questions when elements of a specific culture I’m not familiar with appear in a script, both to verify accuracy and for a sense of what is respectful and what is not.

CW: Apart from an editor, you’re also a creator, illustrator and letterer, having done some comics for The Nib, Everyday Feminism and for Power & Magic Releases, and lettering for projects like Archival Quality (which was a 10/10 for our reviewers) and Mooncakes. How do both your editor experience and your creator experience intertwine, and what do you like most about doing these multiple things?

JG: Comics have fascinated me for a very long time, so I’m really grateful that I’ve gotten to participate in just about every aspect of their creation! I would say that is my greatest strength as an editor. I understand how every aspect of the process works, why it’s important, how it can go wrong, and most importantly, how it feels to make a comic. 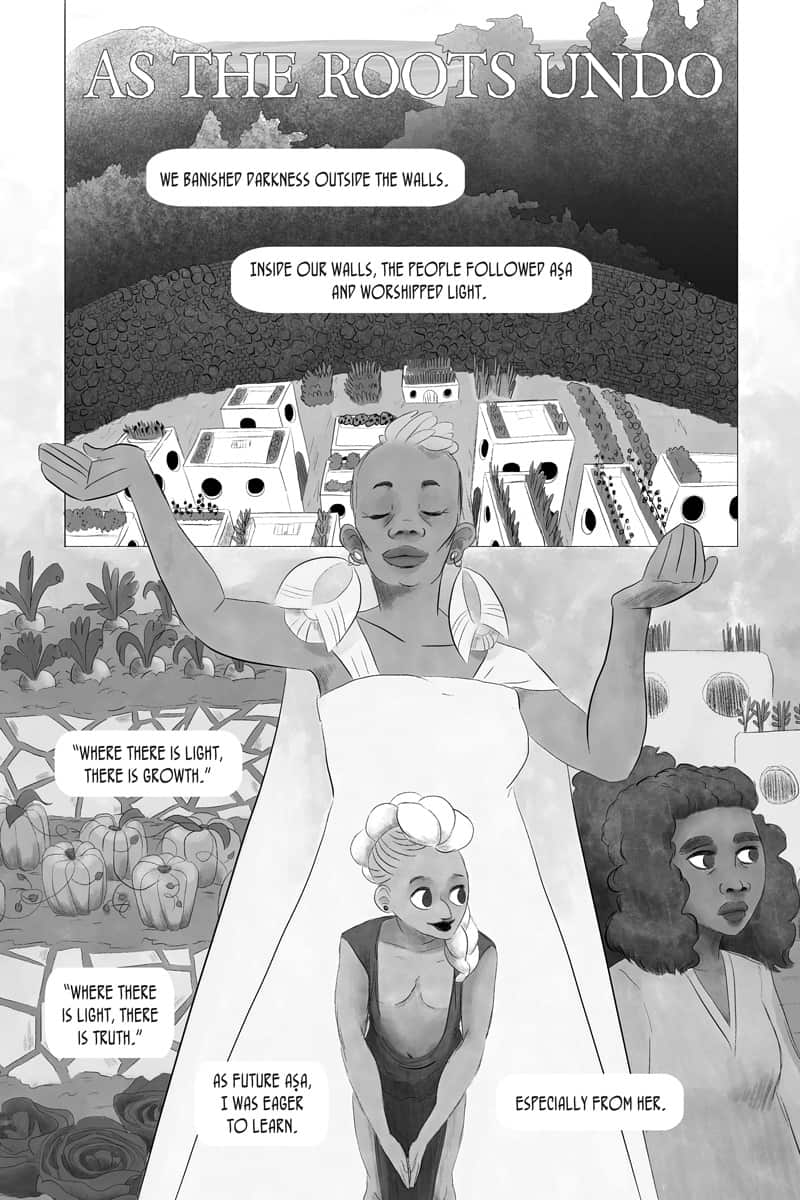