The Brilliant Art of Wimmen’s Comix

The two-volume hardcover reprint of Wimmen’s Comix (and its immediate predecessor, It Ain’t Me Babe) is a treasure trove of comics by over thirty wonderful artists. What strikes me is how much emphasis is placed on their writing (understandable; there is some fantastic writing) and the politics (the existence, alone, of these comics, is a volatile political act), with relatively little written as to the amazing quality of the artwork, the visual impact, the narrativizing in imagery, the good drawings. This is only small rectification of that imbalance, but the artwork in The Complete Wimmen’s Comix should be lauded and shared for its glory and power. 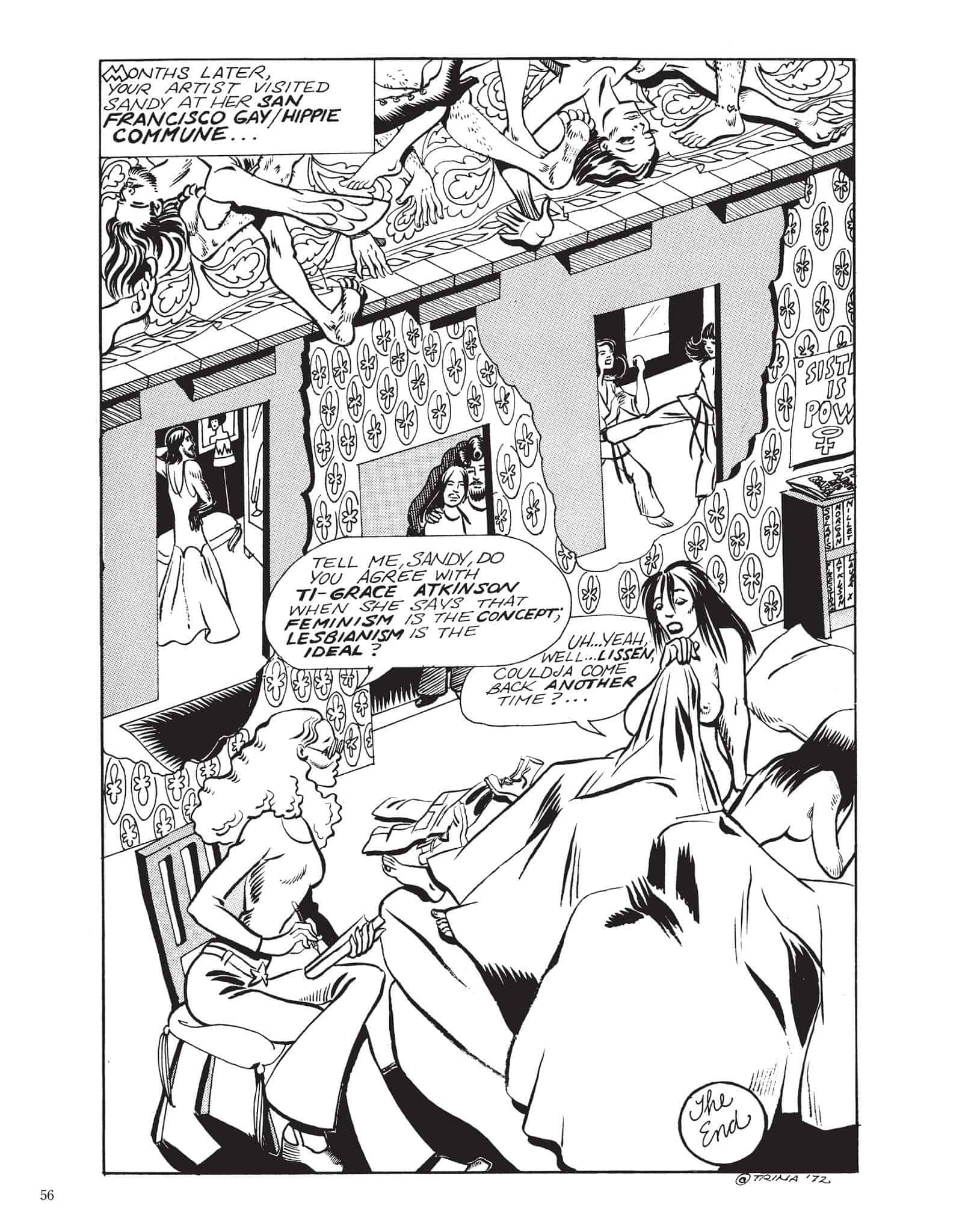 Trina Robbins has been a legend in the field since she joined the field. An immeasurable genius of comics, an amazing comics historian, vibrant supporter of the comics arts, and champion of other people who make awesome comics. Her 1972, Sandy Comes Out, is a very short comic, which operates on the old one-two setup and punchline, and that punchline is a full-page expressionist polyptych which a major US comics publisher would not have risked, not only for its nudity and sexual content, which are simultaneously daring and not at all gratuitous or confrontational, but also simply for the artistry of it. American-made gekiga-time comics, this splash panel is an arrested moment, an evocation of a time and timelessness, an intensity and propensity of feeling over narrative. To read the polyptych’s parts as a narrative progression is tempting, but whether you move from left to right, tier by tier down, the causal narrative is not there. They are, at most, a series of related intimations.

The flex of feet carry as much evocation as facial expressions or dialogue balloons. The tiers descend from the most purely evocative and multi-directional to a more orderly sequence of potential events, to a single panel naturalist lower third which ends up framing and recontextualizing the above two tiers with its two nudes in bed and its narrator/self-portrait leaning forward in a chair to interview the title character from her bed.

Floral shapes, rugs and pillows carry as much evocation as bodies and hair, text and architecture, the impossibly blending paisley and ditsy wallpapers and open spaces in the walls. The boots and clothing discarded on the floor. The legible spines of the books on the bookshelf under the Sisterhood is Power sign. An ankle bracelet. A limb transforming into the paisley.  Trina, herself, asking, “Do you agree with Ti-Grace Atkinson when she says that feminism is the concept, lesbianism is the ideal?” Our titular character and character study asking Trina to come back another time. 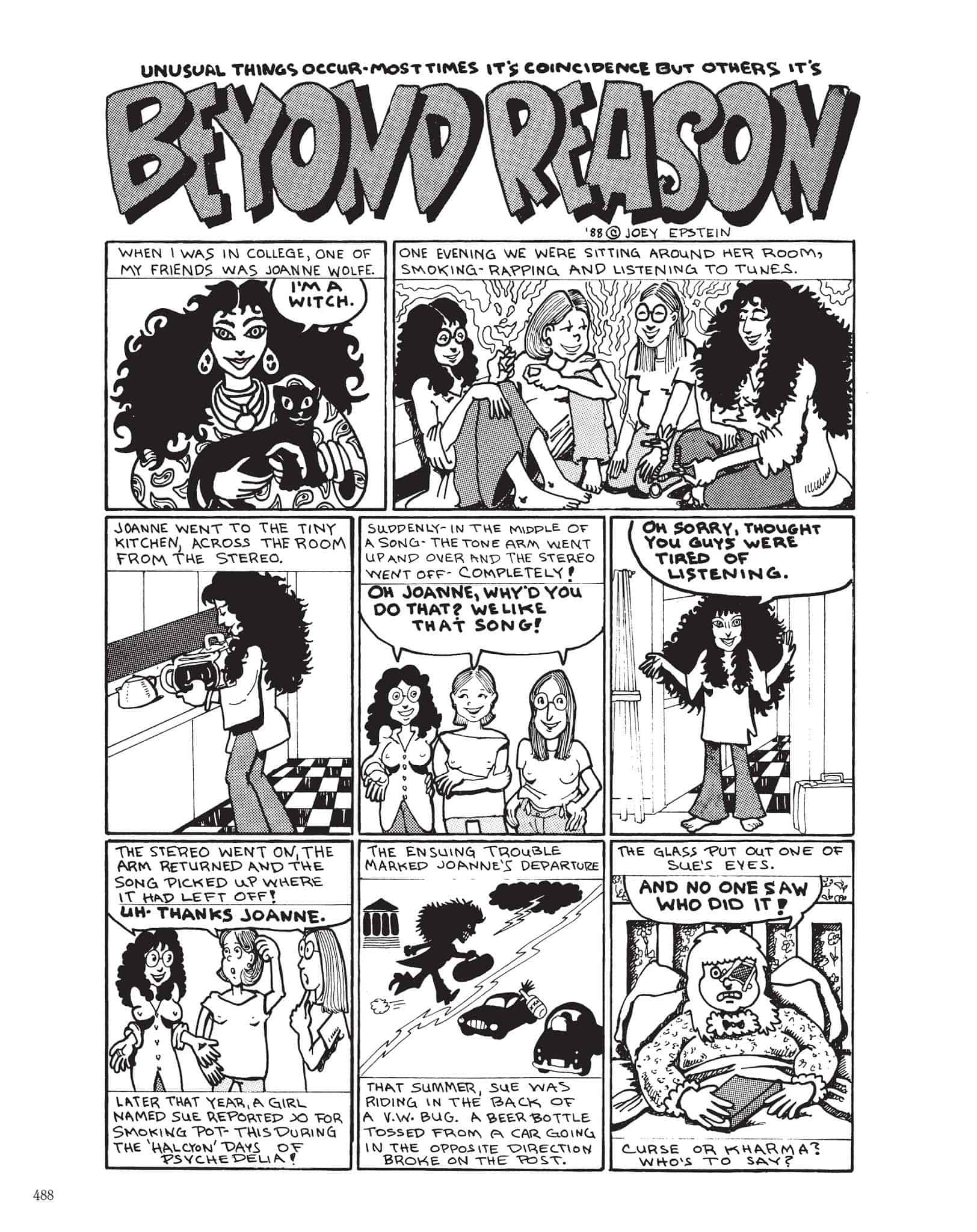 Beyond Reason continues some paisley motif (paisley was big for decades and remains variable and useful), as Joey Epstein takes us on an adventure of consequence, inference, witches and a girl named, Sue.

Three-tier, as these pages most often will be, this 1988 comic is more filmic in its narrative progression, each panel moving us through a scene as it progresses chronologically, with the final two jumping forward, each, in time, to show us the consequences from that night. The five characters are all amazingly designed to be specific, clear people. Joanne’s hair is a force of nature and truth and sets her visually apart as a distinct figure even in a mix of otherwise distinct women.

Epstein’s art leans strong into sturdy, solid blacks and whites, the spot black hair, the black and white tile floors. The thin, definite lines of the pot smoke that make patterns of the air. Peter Max outlines aimed at total ease of perception and interpretation. Clear line dynamism mixed with shadow-puppet chiaroscuro purity. The complete cartooning of the lightning bolt or Joanne being kicked out of college promote the realism, the believability, rather than undercutting it.

The gestures of the characters are broad enough to feel universal and true. The silly face in the marijuana smoke could be a face or just how the smoke lay in the air. The simplicity of the kitchen, the absence of backgrounds in the panels where the group is together give an immediacy to one person in a room versus a group vibing together. An articulate but never overwrought cartoon. 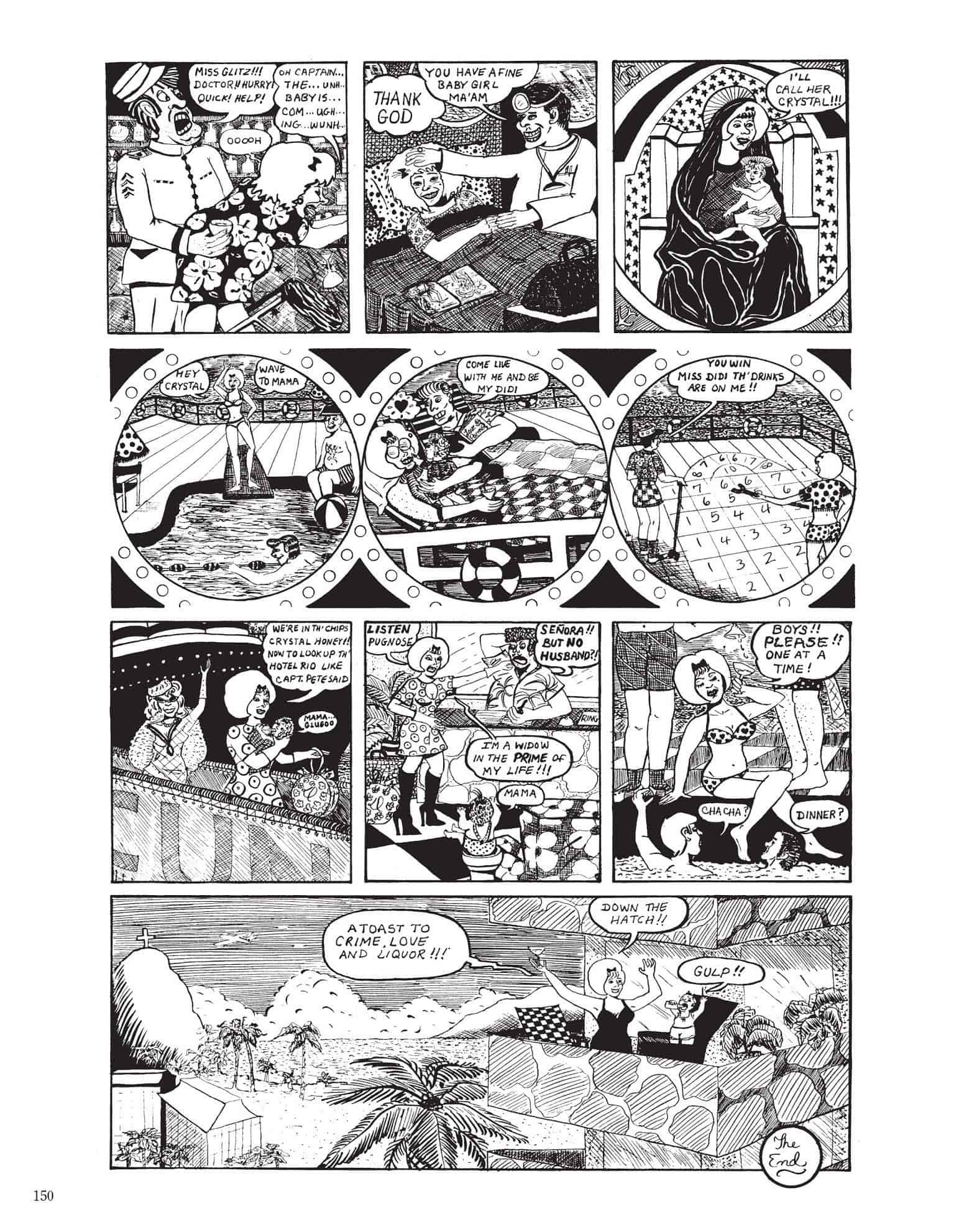 How would anyone not love Didi Glitz? Inkpot winner and Eisner-nominee Diane Noomin brings incredible energy to all of her work, and this classic Glitz adventure is no different. The characters’ rictus expressions, the surreal deliberateness of postures and behavior, the symbolist and kitsch framings from beatification to nautical-themed frames which bring to mind The Love Boat with their porthole motif. Hatching, crosshatching, parallel lines, patterns, ripples collide and scatter the eye, walking our eye and our mind panel to panel to follow Didi Glitz.

Why are the top right panel and the leftmost bottom panel united in their Christian trappings? Why are the center panels of the first three tiers men to the right of Didi and interacting with her? Like the letters of FUN truncated but trusted to the audience, the echoes and parallels of the page are more symbolist beats, points of irony or inflection, than they are narrative concerns. 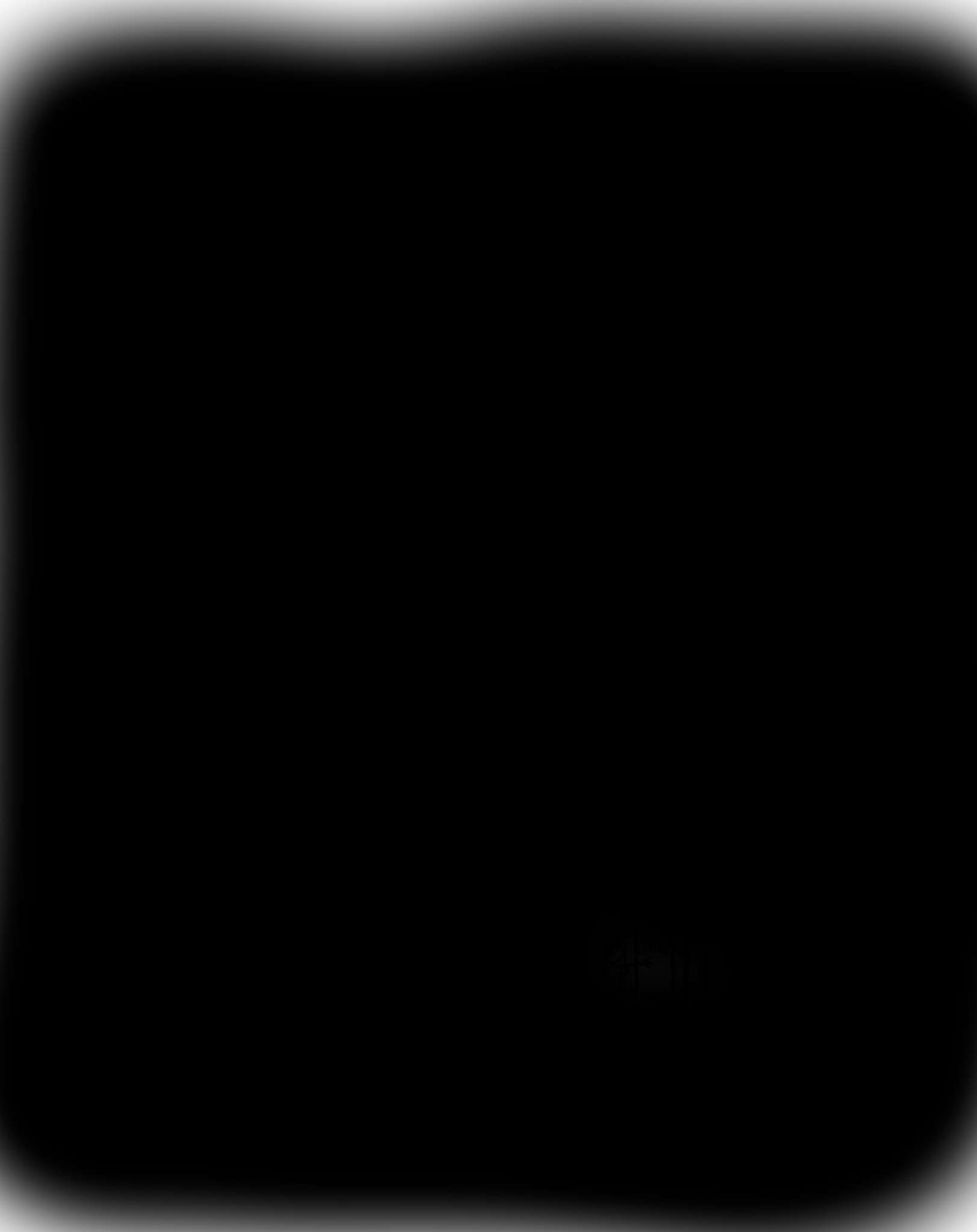 Unavailable.
We make our choices in the art we promote.

I preselected by examples to give a range and for their level of visual engagement and I absolutely love the look of Nina’s Wonderful World of PMS. But, I do not want to have to derail a discussion of vibrant line, humorous caricature, evocative patterns and intelligent panel progression with rumination on transphobia, anti-trans aggression, orientalism, reductive monoculture theorizing, or how much it hurts when someone is so obviously brilliant in many ways, at many things, only to be hateful or cruel in others. I do not want this to become an article about milkshake ducks or long time heroes letting you down.

We assume in every comic we read. And, comics which loudly present some of their politics, the political or social agendas of their authors, can lead us to believe we understand or agree with all that author’s ideas. It is not that the makers of the comics or the publishers, anyone has tried to fool us. Not usually. We as individuals fool ourselves.

We believe a songwriter has our beliefs because we both like pie and our mothers. We believe a performer cannot be a TERF because they dress cool and came in on a wave of entertainment we hold in esteem. That all evidence of disagreement is them being satirical or poking fun or a naive because we do not want to embrace what we know. Maybe we hold on in hopes they will come around. We trust the learning process. We believe the learning process is universal and unidirectional.

Investing in art is good. Healthy. Investing in people, in narrative, in emotion, personal truths, evocations. Investing in statements, outreach, and unification is good and healthy.

I will not tell you which ethical decisions you have to draw your line at. I do not know what disagreements will upset you enough you have to get out of Dodge. What I know is, nine times out of a generalized ten, it is you who have to get out first. If there is a slasher killer in your house or a bad smell, you have to leave the house, at least to get your bearings, and then, if it is reasonable, you can go back in and check for a gas leak or stab the killer with six household items and hope they die in the backyard before the credits roll.

You put the oxygen mask on yourself before you put one on the person in the airplane seat beside you or before you try to take over flying for the pilots who were knocked out by that mysterious smell that made you believe you were inside your house. 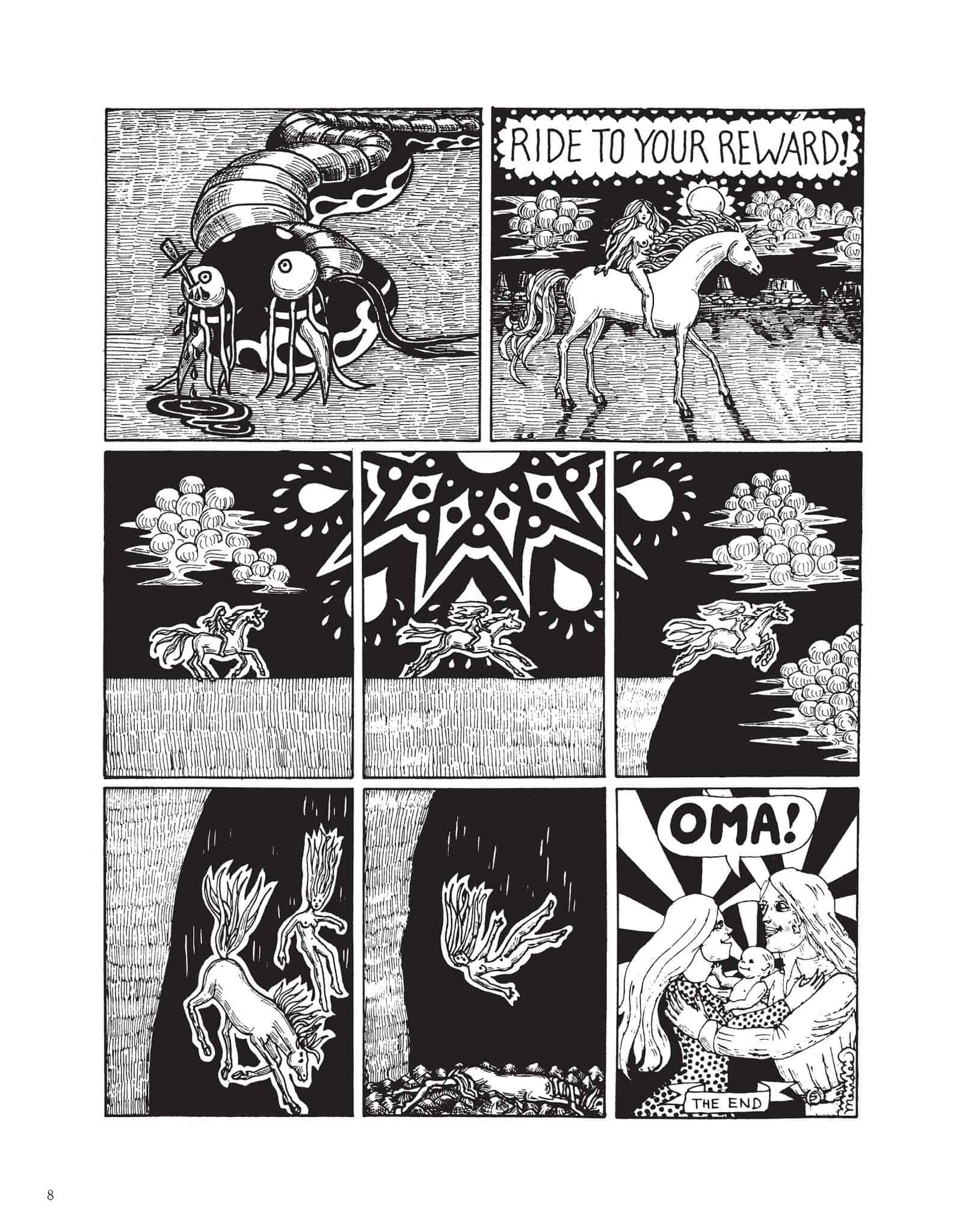 I do not know Willy Mendes’ politics, that much. I do not know the specific intentions of her short comic, Oma, which ran in It Ain’t Me Babe. I know the comic, like much of her work, resonates with me on levels, at various frequencies.

Symbolism in art is not a rigid set of one-to-one correspondences, it is not a codebook of simple ciphers and substitutions. Our reaction to symbolic content is cultural, historical, a matter of education, of life experience, personal interest. There are symbolist audiences even more than there are symbolist artists.

Mendes’ work is hot, full, intense in its evocations and resonances. Strong to our eyes, our minds and souls. Even the backgrounds of Oma, the closed we have to empty space, are filled with hatching, texture lines and contours. Events and images appear to occur and then beg us for explanation or meaning. They may have no explanation that would justify for us, for someone else, even for Mendes. I do not know, for you or for Mendes. I can know for me, or feel it for me.

Oma leaves me alone yet feeling that I am connected and on the level with at least some others. That middle tier of panels, a figure on horseback moving along the horizon line, passing an abstract and decorative star in the sky, leaping from a cliff, brings in me a sense of arrested eternity, of symbolic and dreamlike eternity, of good truth. I feel more animism towards this page than I do towards many long stretches of more traditionally narrative comics, the soap and drang of Amazing Spider-Man or Ranma 1/2. I do not anthropomorphize the page or the art or the story or the beingness, but I feel the beingness. I am aware of the comic as artifact, as reproduction, of evocation, of author’s effort and the myriad understandings that are not mine and those which share with me.

The Brilliant Art of Wimmen’s Comix