“For a scrap of knowledge you would sell the universe into slavery!” Orion says of Metron. We ought to fear we would.

It is Orion’s lack of self-examination, even as the deified poet warrior, that results in his (temporary or apparent) death. Orion is, it is likely, born to die. Cosmically inclined to die in battle, to die a warrior’s death. 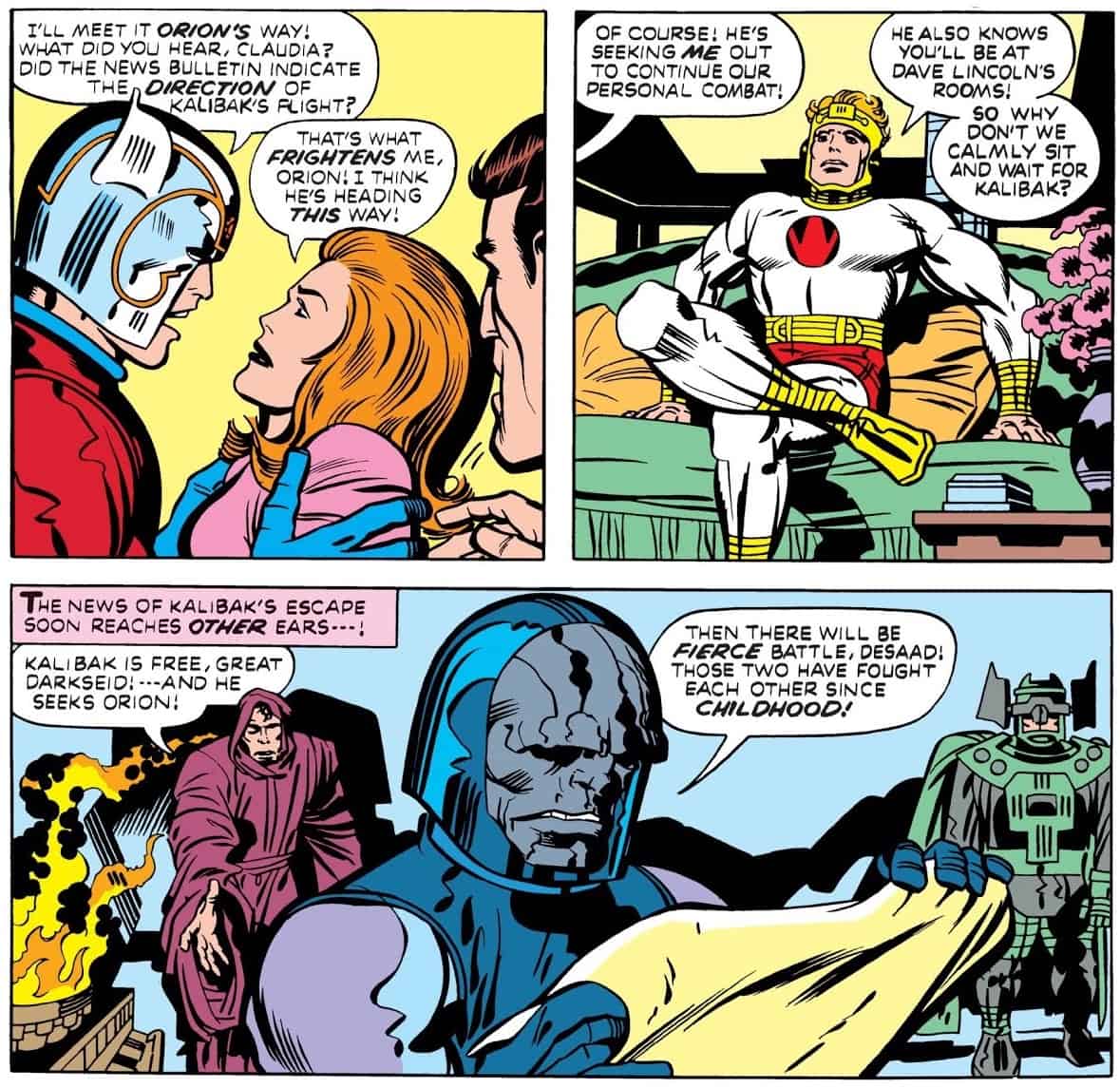 “Warrior’s death” is nonsense. A thing to say. A justification of a too common tragic farce.

Or, it is the elevated glory to which we should seek.

It is difficult to reckon which and probably impossible to be sure of, either way. 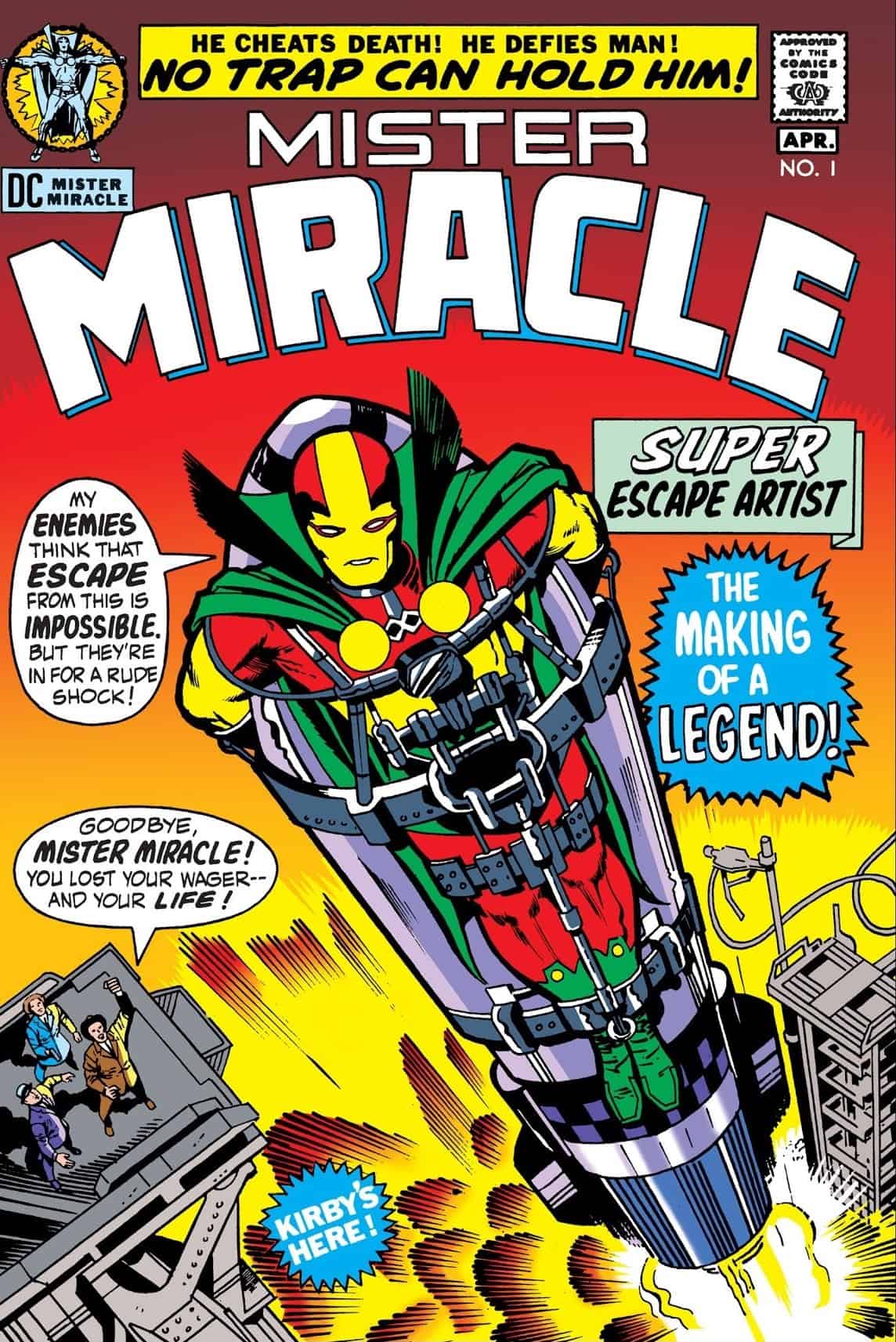 We can be frustrated that Kirby’s Fourth World is not completed to the original plans, but which original plans? The Black Racer was designed, initially, for a series by an all-Black creative crew. Scott Free, who takes over the stage persona of Mr Miracle, escape artist, was, at one point, going to be written by Mark Evanier. Jack Kirby did not intend to write and draw all, or even the majority of the Fourth World comics. “Fourth World,” is probably not his term.

The four hardback collections which form one epic are an enticing idea. Being able to remove corrections made to the art to bring Superman’s face to model or having pages re-inked to bring Barda back up to her proper proportions can feel attractive. Recoloring. Returning to earlier coloring. Adjusting lettering. To interleave the serials or to collect one and then the next as whole runs both hold many different appeals.

Superman experiences Supertown, the New Gods’ floating shining city, as a sequence of morality plays. We experience these comics, these stories and pin-ups and vignettes, and they are morality plays. They are example-fields wherein everything has what meanings we find. 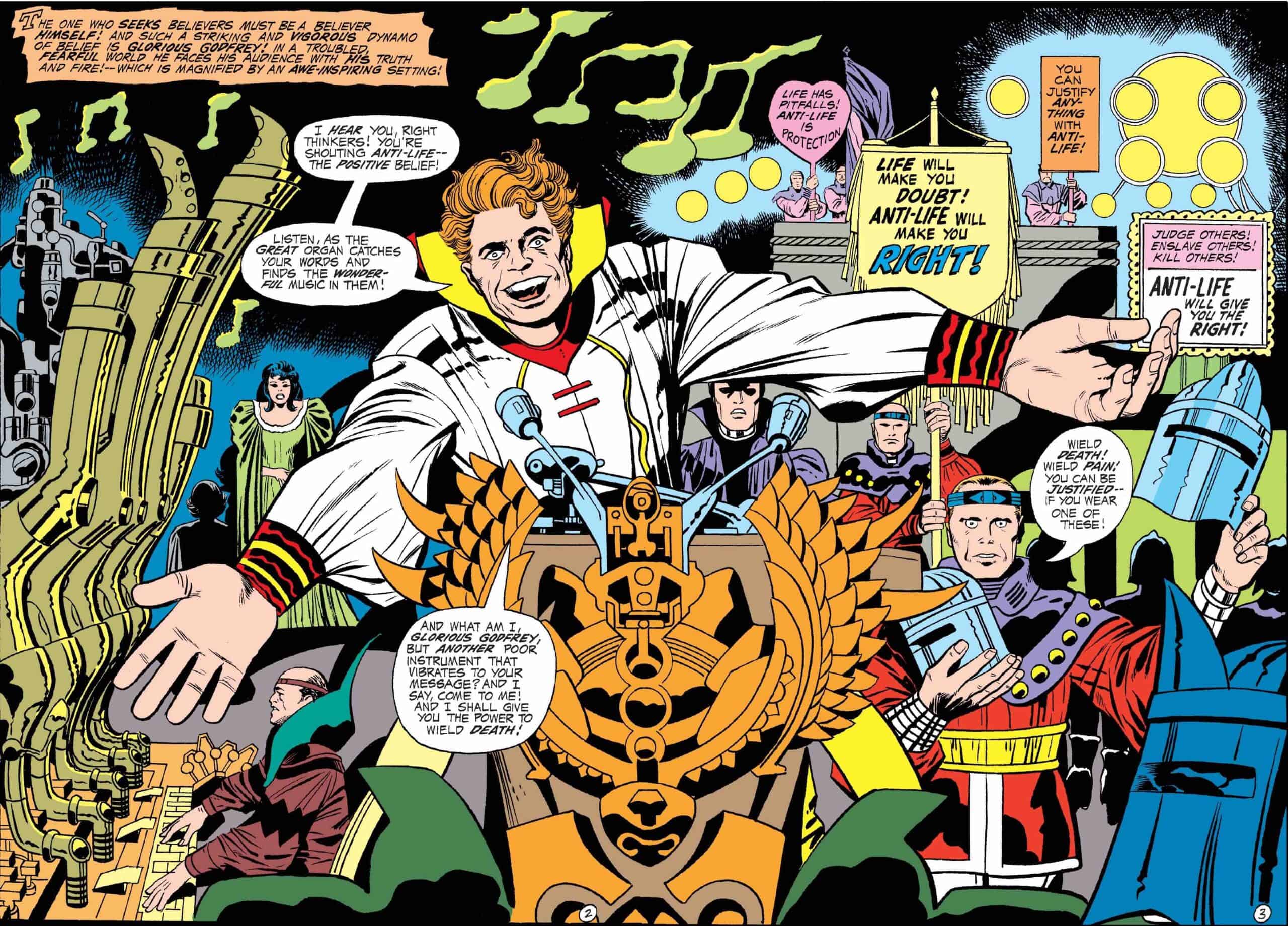 Kirby’s Fourth World is one of the most mature, and fully – and fulfillingly – articulated interweavings of quest narrative and pilgrimage narrative, of narratives motivated by a character’s wants and narratives designed around a character’s experience.

Eurocentric pop fiction is almost completely dominated by quest stories and what does this character want. Most anglophone writing classes emphasize, “what does your character want” as if it is the only question of fiction, the most significant question of storytelling. The quest narrative is sometimes boiled down to the very effective, very direct stop the bomb narrative. Stop the Bomb is such an effective narrative device is overruns much of English-language entertainment, it is sometimes seen as the break between entertainment or art, and other times, anything lacking this directness, is decreed clumsy, unfocused, full of filler or lacking a strong through line.

Want, in the Fourth World, stops us from learning too well. Darkseid wants. Orion wants. Billion Dollar Bates just asks for more and more, using his voice which cannot be resisted to conquer. Quest narratives are conquests. Sometimes they are grand, international, world-encompassing conquests. Some are smaller, focused on a neighborhood, a family, a workplace. But, they are rooted – in English and in anglophone culture – in the Crusades, in westward expansion, in colonization and domination.

Flippa Dippa is no villain, but his obsession with scuba diving and his insistence on wearing his diving gear everywhere is immature. He is a child character and behaves as a child character (caricature). When he is ever so rarely rewarded for his diligent fandom, his obsession, he is so excited that his “scuba cells are vibratin’!” 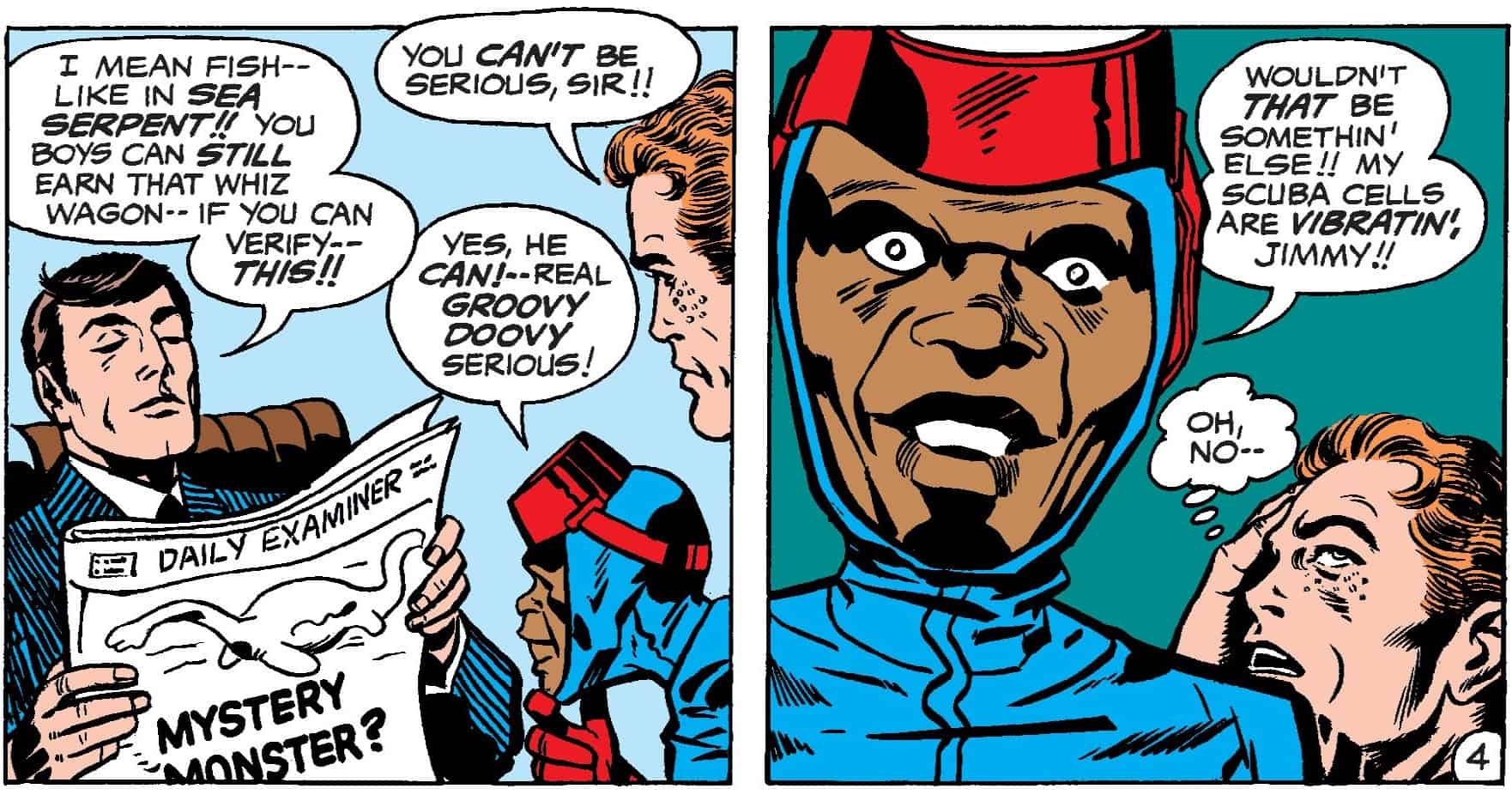 Horrifyingly, it is difficult to tell if Darkseid is being patient or not. Darkseid may be contented to tweak a nose or ruin a wedding as he is eager to murder or conquer. Desaad is belittled by Darkseid for craving more than is necessary in a moment’s attack, a moment’s revenge, but is Darkseid speaking truthfully of his own behavior and beliefs, or is he verbally tweaking Desaad’s nose because embodying sadism requires that kind of appetite? Elsewhen, Darkseid is described as, “the spearhead of pure elemental force,” which, like when he is called a “tiger-force,” “must thirst.”

Darkseid arranges entire theme parks to torture a handful of meddling kids. Darkseid stops in that theme park to spook a small child and her adult guardian. Darkseid tries to conquer the Earth.

A short comic following the main story in one issue of Jimmy Olsen, Arin the Amored Man!!! is less story than a vignette, but it is a vignette which wonderfully touches on Kirby’s prior output, especially the original Galactus and Silver Surfer story from Fantastic Four, addresses the nature of designed life forms, purposefulness is living, and the ideas and practicalities of comforts and wants. Arin is designed by his father-creator for a life outside atmosphere or gravity, for outer space. He is designed to carry Superman’s genetic code, now recorded, far away from Earth, where it might be abused. His pleasure is found in his purpose, his purpose is prescribed, and his purposeful please, “means freedom.”

There is, in the world, desire for Superman’s genetic code for the purposes of using it, clones and such – and in this world, clones are frequently made without express permission from the original genetic source – but there is also a desire for, simply, a record. Superman’s DNA is, in Arin, prized as a lasting record.

Arin, like Scrapper’s miniature, Scrapper Trooper clone, desires to prove himself, and to fulfill a purpose, with a directness – maybe a naïveté – which non-clones are shown to experience only more subtly and because of social-awareness, in a more coded way.

Victor Volcanum, with his outdated motifs and cornpone name, is a sophisticate who has become, with the passing of time and aging out of techniques, unsophisticated. Nigh immortal, powerful, rich, taken care of, if Volcanum simply stayed put, if he was satisfied with less than world conquest and everyone shivering at his name, he would be fine for a long long long time. 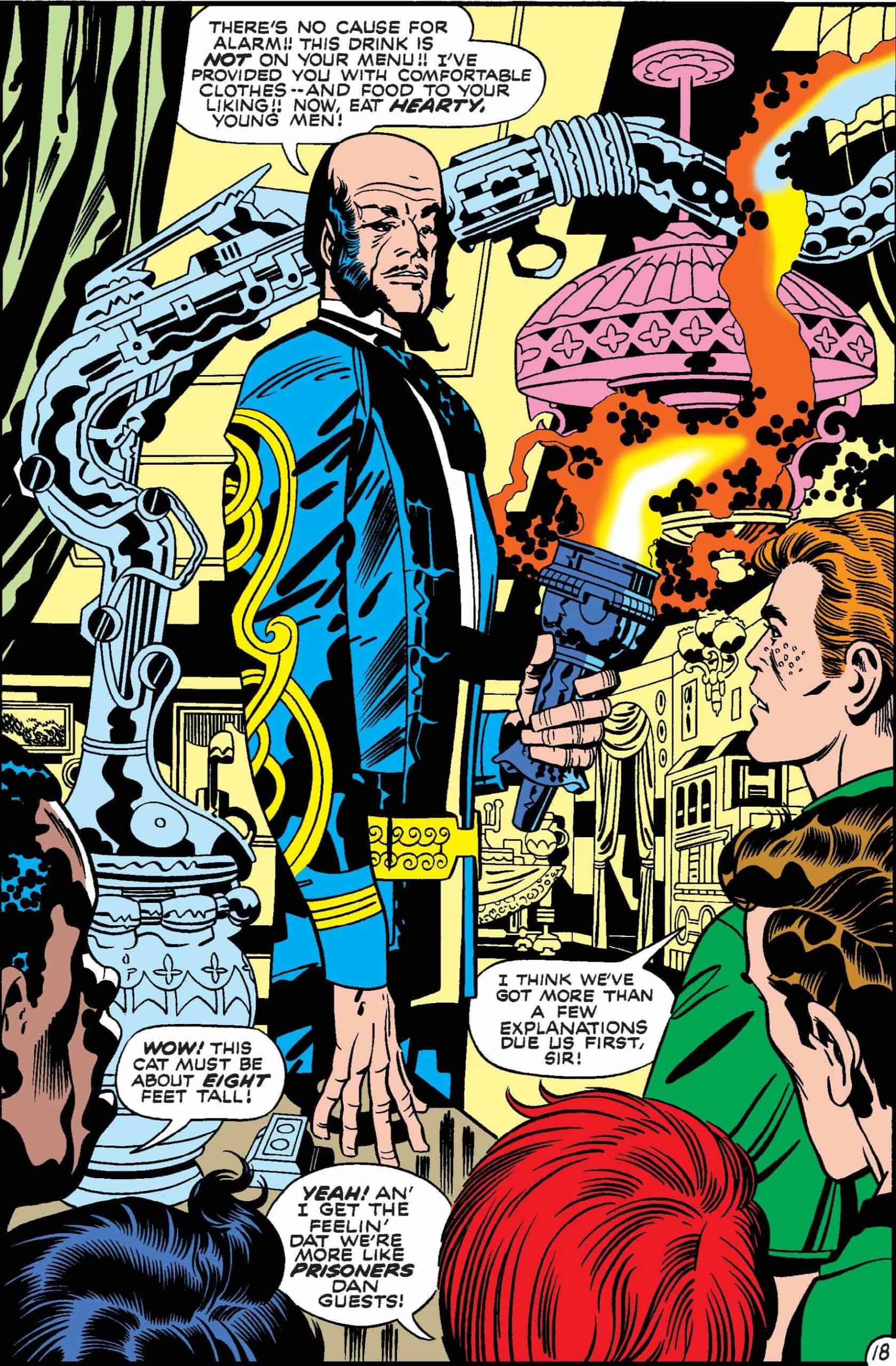 Mokkari and Simyan could continue pure research, the way that most of the scientists seen in the Fourth World are up to, but they crave the attention and lauding they are not experiencing, and that approval, that awe, is where their plots fail and their creations betray them.

Kirby’s radical, underrated reinvention of Superman as a man aware of his minority status and the weight of genocide he has inherited, results in a Superman who is largely an observer, one who experiences and feels.

Almost as soon as he is introduced to us in a Fourth World context, Superman is appraised by a boxer, Rocky, who meets him in his Clark Kent guise. Rocky does not understand that Clark Kent is Superman, but no degree of hunching over, acting small, acting meek can disguise Clark’s innate strength, reflexes, and focus. Shaking hands, looking him over, Rocky sees Clark through Clark’s attempts at disguise.

Rocky does not see Superman, however, and believes Superman – by existing – is the destruction of competitive human sport.

Jack Kirby’s Clark Kent is not “Superman’s critique of us.” Kirby’s Clark does not see himself as especially different from other minorities. He understands how, in the United States and elsewhere, minorities are treated, and what it means to be a model minority, what it means to pass or to be read as a majority member. He refers to himself abstractly sometimes, he wonders, “Do they secretly resent him?” and believes, “Despite his powers, he is a minority of one in a teeming world.” That he is a, “Stranger in a strange land.” 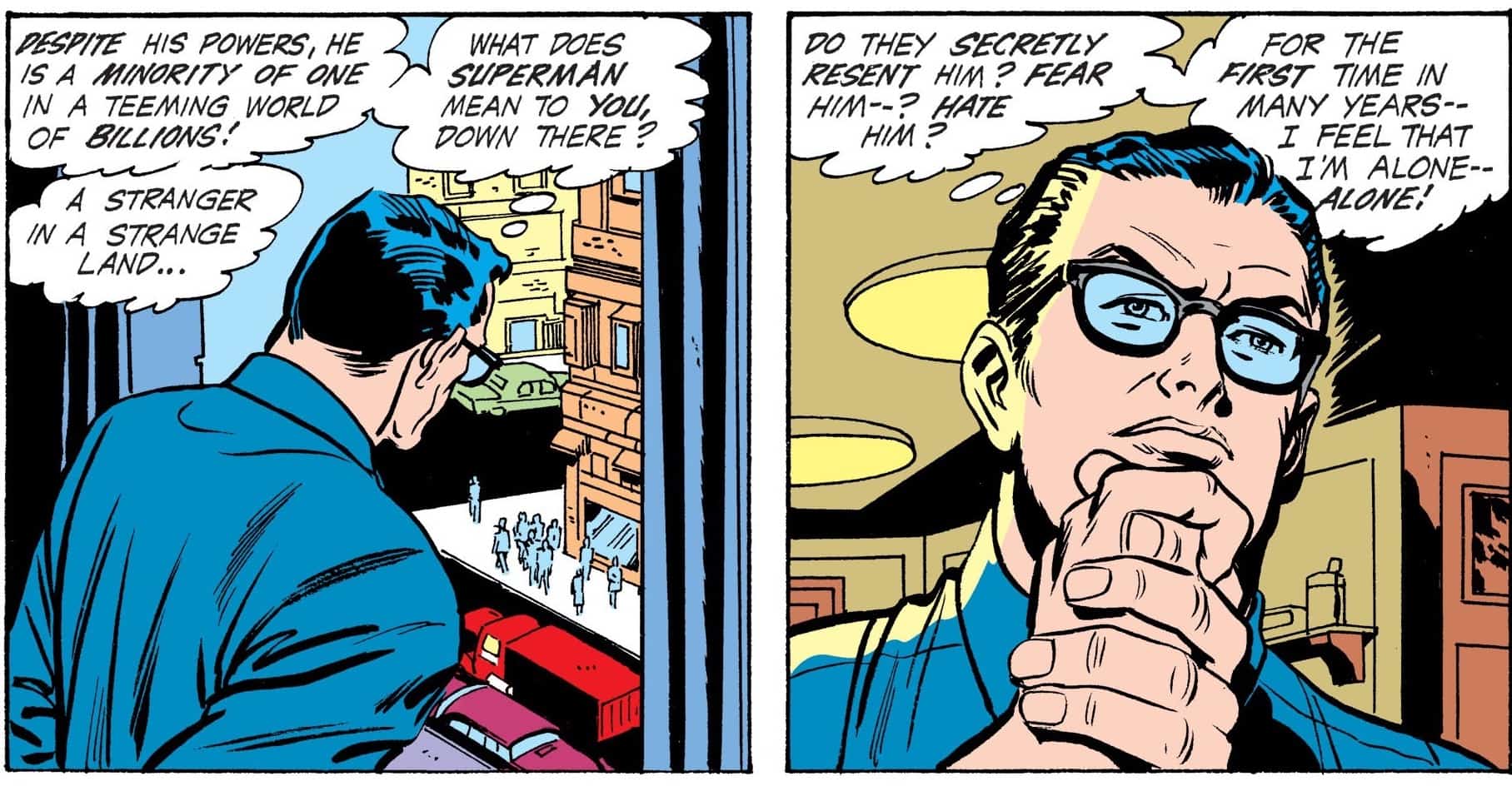 It is under Kirby, in a Fourth World context, that Superman, that Clark Kent, can admit to himself, “I feel that I’m alone.”