The Other Half of The Princess Bride

Patricia Highsmash
Us Living in Fictional Cosmogonies
Part XVIII: The Other Half of The Princess Bride
by Travis Hedge Coke 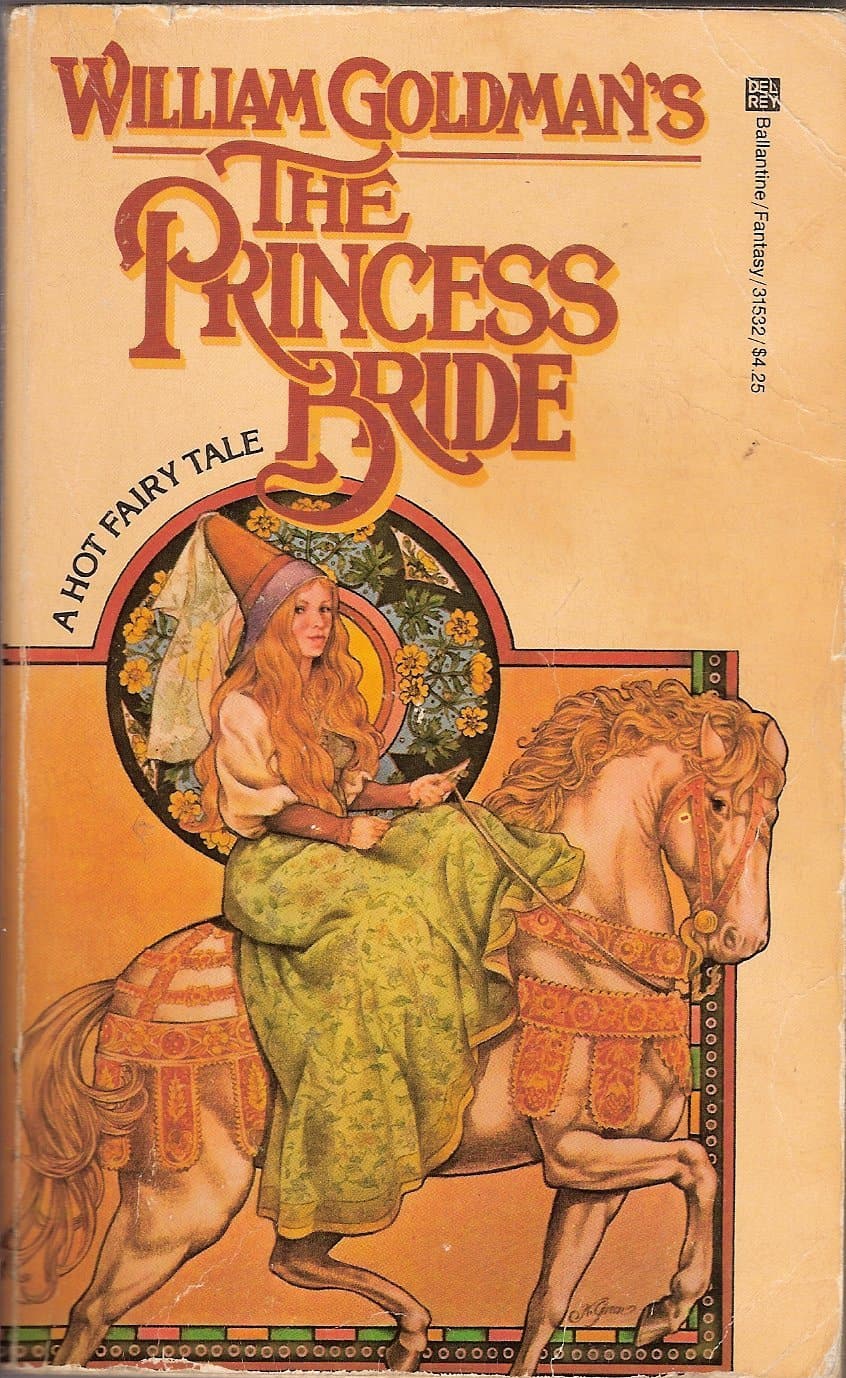 “A HOT FAIRY TALE” is also the subtitle of Us Living in Fictional Cosmogonies.

In 2020, Jason Reitman directed an adaptation of both the 1987 theatrical adaptation and the 1973 novel, The Princess Bride. In Reitman’s version, recorded from various locations during the Covid pandemic, characters were portrayed by multiple actors, scene by scene, which in a real way reifies the retellings theme of the novel and original film, and like that ’87 movie, the Reitman adaptation downplays the fairytale-ing of reality and a full half of the originating William Goldman novel. 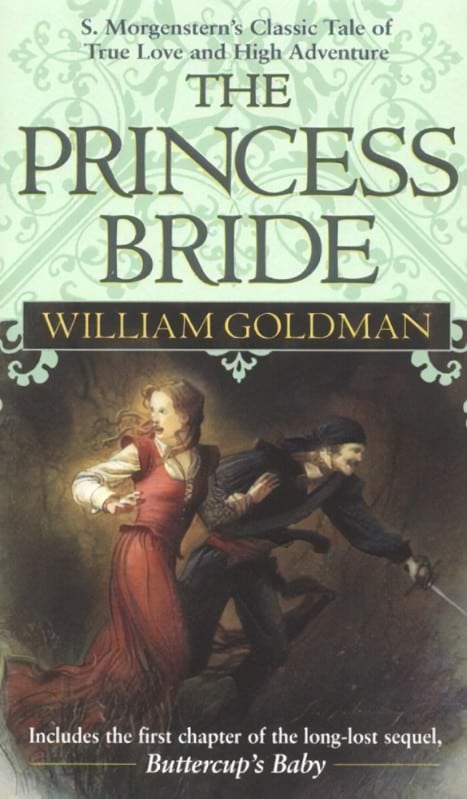 This cover stayed in use a little longer.

The Princess Bride novel – The Princess Bride, S. Morgenstern’s Classic Tale of True Love and High Adventure, The ‘Good Parts’ Version Abridged by William Goldman – is both the fairytale story of a princess bride, pirates, farm boys, revenge, giants, et cetera, and fully a novel about a grown man, a father himself, realizing truths about his father, about fatherhood, about adulthood.

The Princess Bride is labeled a good parts version, telling us as it summarizes boring parts of skips chapters, and half of the text of the novel is a fictional telling of the compiling of that version, presenting a fictional William Goldman, with a fictional life, a fictive family, and both stories segue in and out of one another, parallel and contradict and grow from one another.

The fairy tale world of the fictional The Princess Bride is not the world. The fictive Goldman, his bitterness and confusion, his publishing career and business conflicts, they are not the world. Our world is not the world, either. The world is irretrievable, irreconcilable, unavoidable, intransigent, persuasive, nostalgic, calculated and it cannot be defined on whether or not our world is shared or agreeable. Objectivity is nice, but it is a fairytale. On systemic, fundamental, operative levels, we will never know objectively, if we can even have objectivity and it does not matter. 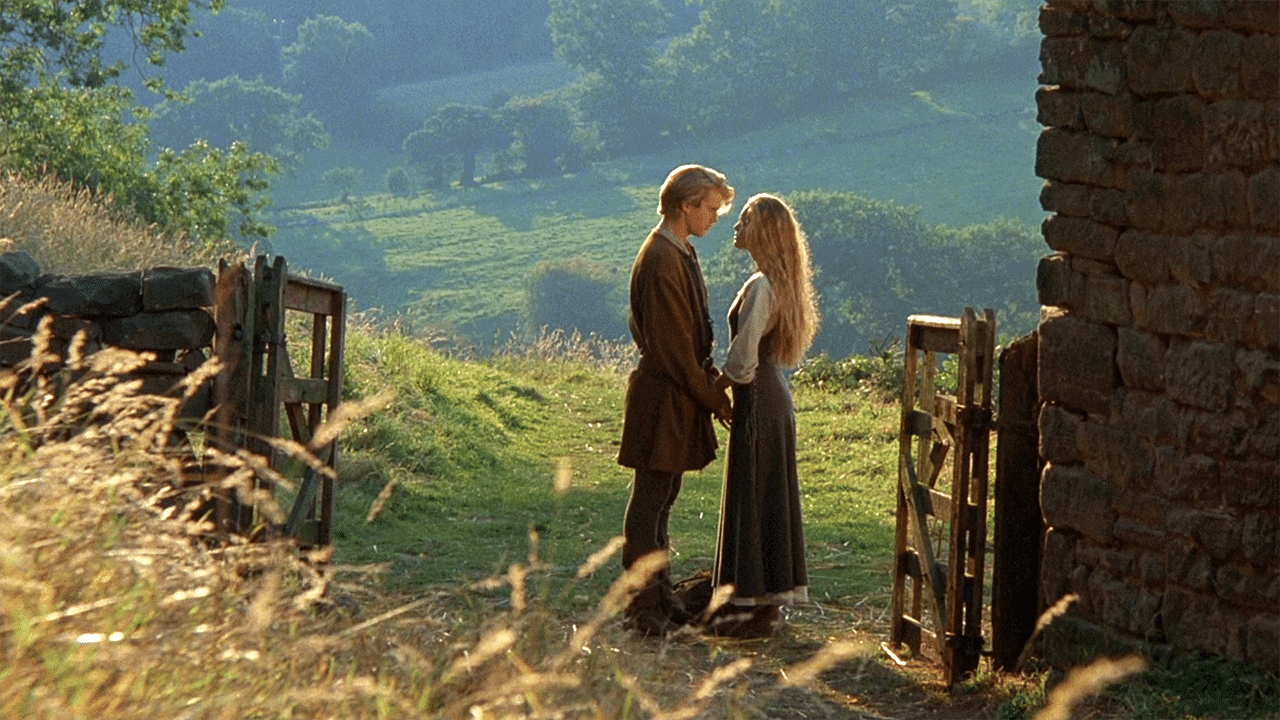 For some people, the whole movie is just this. They ain’t wrong.

The keystone of the first film version of The Princess Bride, is that the prepared speech of revenge and invocation which Inigo Montoya carries for years and recites to his father’s killer gives way to, “I want my father back, you son of a bitch.” The novel is held together, like broken memories with old, dried, brown and splitting scotch tape, by a desire for the fictional Goldman’s father, and for the father he wishes he had been, that he might have actually been, and fictive-Goldman as a father, as a failure of a father, as a human being.

It is what we have. Not failures, but stories – relatable stories – of failure.

While the movie replaces the entire outside-the-fairytale narrative with a sick boy and his patient grandfather, the novel’s fictive author has a family which does not resemble, at all, the real world author of the same name, Goldman.  Real world Goldman had daughters. Fictive Goldman has a son.

Fictive Goldman can be cruel, sharp, ignorant, petty, and it will be funny, perhaps, to Goldman’s real family. His daughters asked for a story about a princess and a bridge, respectively, not to be insulted or belittled. He is not insulting his real family, even by proxy. The fictional Goldman, stand-in Goldman, and his perspectives on life highlight the real Goldman’s because they are often in opposition. And, because the fictive Goldman is built for an arc in a novel. He is malleable as a caricature.

Goldman would offer audiences to write him for a chapter written by him, not by Morgenstern, reuniting characters, and when such missives were written and posted to him, would reply with a letter stating he was being legally prevented from including that chapter even by mail, under threat of legal action. Goldman played the fiction that he was his character and his character’s scenario was true as much as he could for audiences. A writer famous in his own right, he let the movie version, and its extra layers of truthiness overshadow his contribution as he let Morgenstern, the fictive author, overshadow himself. 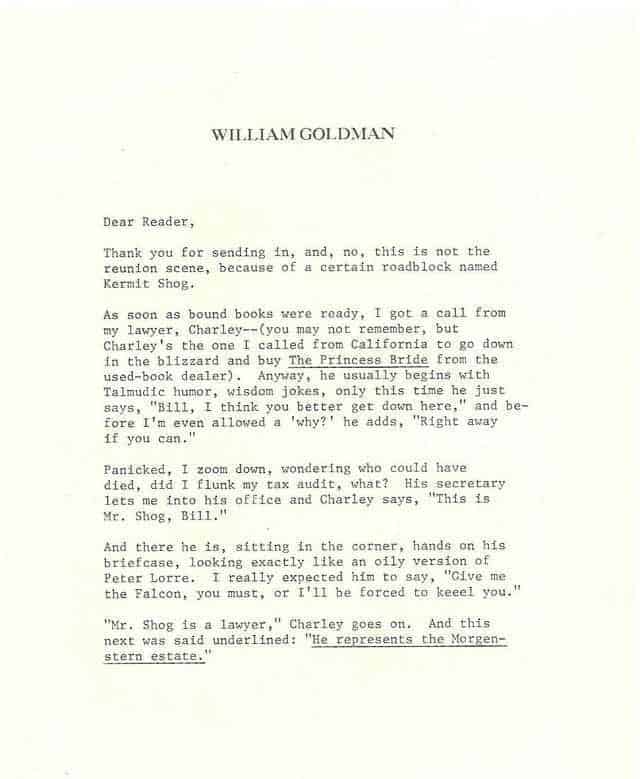 The characters in the fairytale world, too, in the novel-in-the-novel world, are built malleable. An oft-quoted line in a very quotable book and movie, is that, “Life is pain,” and, “anyone who says differently is selling something,” but this declaration is made by Westley while in the guise of the Dread Pirate Roberts to a woman he believes, while the love of his life, has given up on him entirely to marry for money and power. When, shortly after he says the line, he understands she did not abandon him at all, with love and faith restored, Westley never speaks similarly again. “I was feeling defensive. Okeh!?” 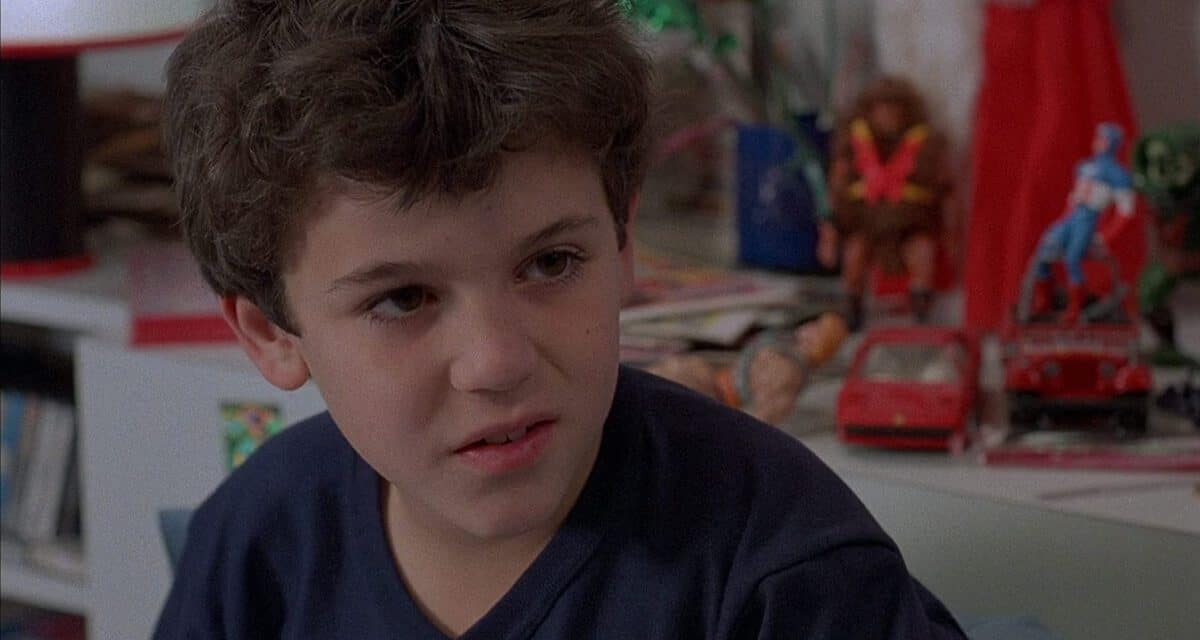 Look at him, wide-eyed with pure wonder!

In Once Upon a Deadpool, the titular Deadpool kidnaps actor Fred Savage, places him in a recreation of the bedroom from his scenes as the real world in the movie of The Princess Bride, to sit and tell him the story of Deadpool 2. Deadpool cites Savage’s “childlike wonder,” successful as a soft reference to a television series Savage starred in as a child, The Wonder Years, but not particularly convincing as a read of Savage’s character or characterization in The Princess Bride, in which he is naively cynical, cautious, and because he is sick, because he is a kid, because his grandfather pinches his cheeks and he hates that, in a bad mood.

Towards the end of the novel, the author of the good parts version of The Princess Bride, which we are reading, realizes that he can – that he has to – choose which parts to return to, to focus on, to believe. We have to choose. We have to exercise our own faculties. We are not characters recorded on paper, in words, unchanging read after read, but neither are fictional characters in a book. Everything changes. They change with every read. They change while we read. They change when we are not reading but thinking about the movie adaptation or a parody of the movie adaptation or what we were doing when we were talking about the parody of the movie of the book sometime years ago.

The 2021 reboot of The Wonder Years, focusing on a Black child, a Black family, was met with anxiety from people who worried it would erase whiteness, from people who worried that a or the Black experience would not properly be conveyed under that title and the nostalgic simplified air of the original program. Introducing race, alone, was stressful to some potential audience. 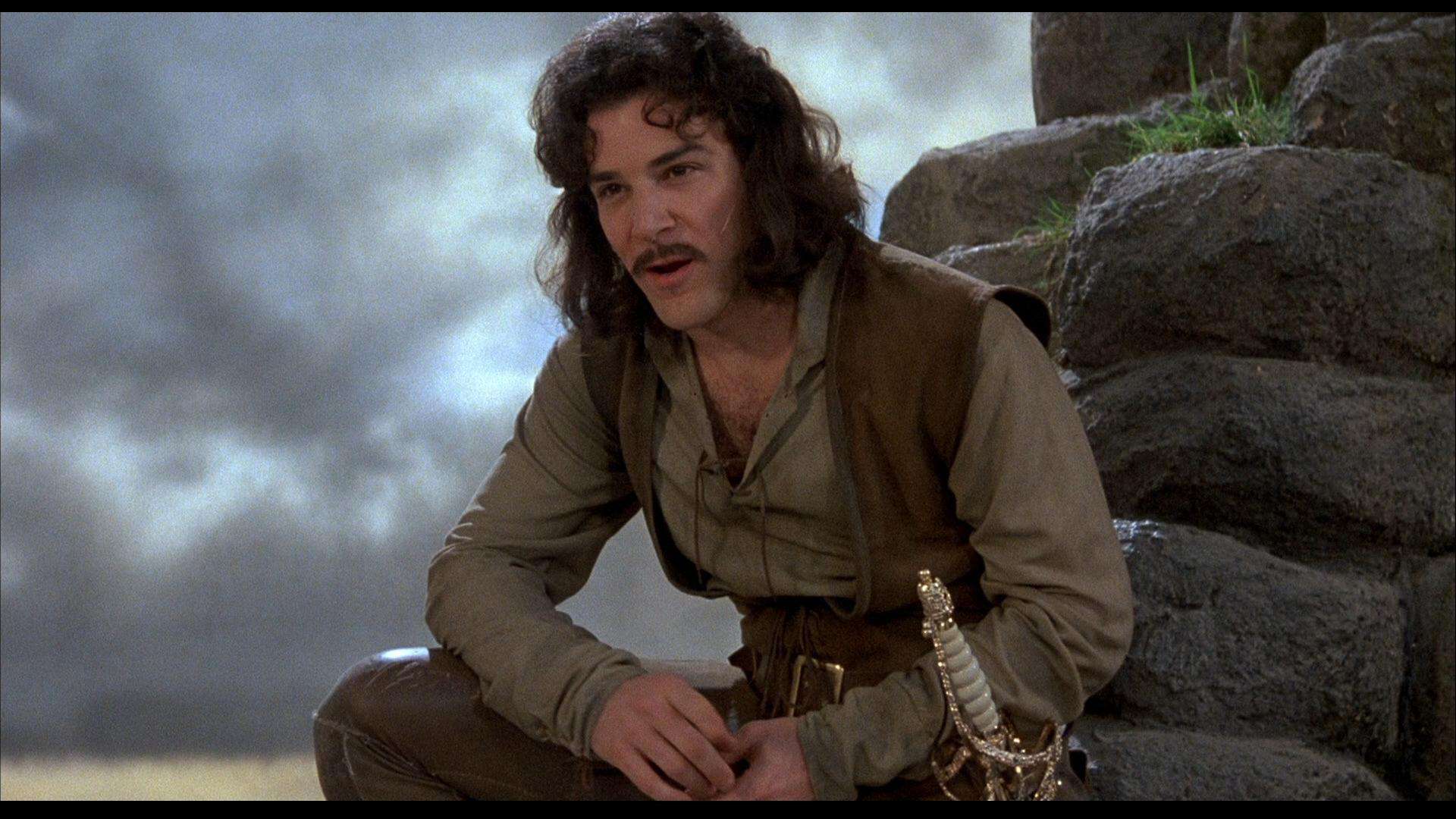 The Princess Bride has some ethnic humor, which is to say, parts of it are racist or xenophobic for laughs. Inigo Montoya, played in the movie adaptation as purely a Spaniard by Jewish actor, Mandy Patinkin, the novel’s Inigo extends to many stereotypes and earmarks of other, related ethnicities, most specifically, the reference to a racist word for Latinx people.

The movie skips that. The adaptation of the movie to online media skips it. I skip it. My head does not skip it, but I don’t tell anybody about it.

The Other Half of The Princess Bride