For all its chaotic developments, feuds and drama, The Walking Dead Deluxe #16 might be the first issue in the series thus far that actually feels like a horror movie. There are a few out there who claim TWD isn’t actually a horror story and there are even comments from Kirkman himself that show he didn’t always approach it as such, but there is no doubt that this issue was inspired by a real life horror faced far too often. 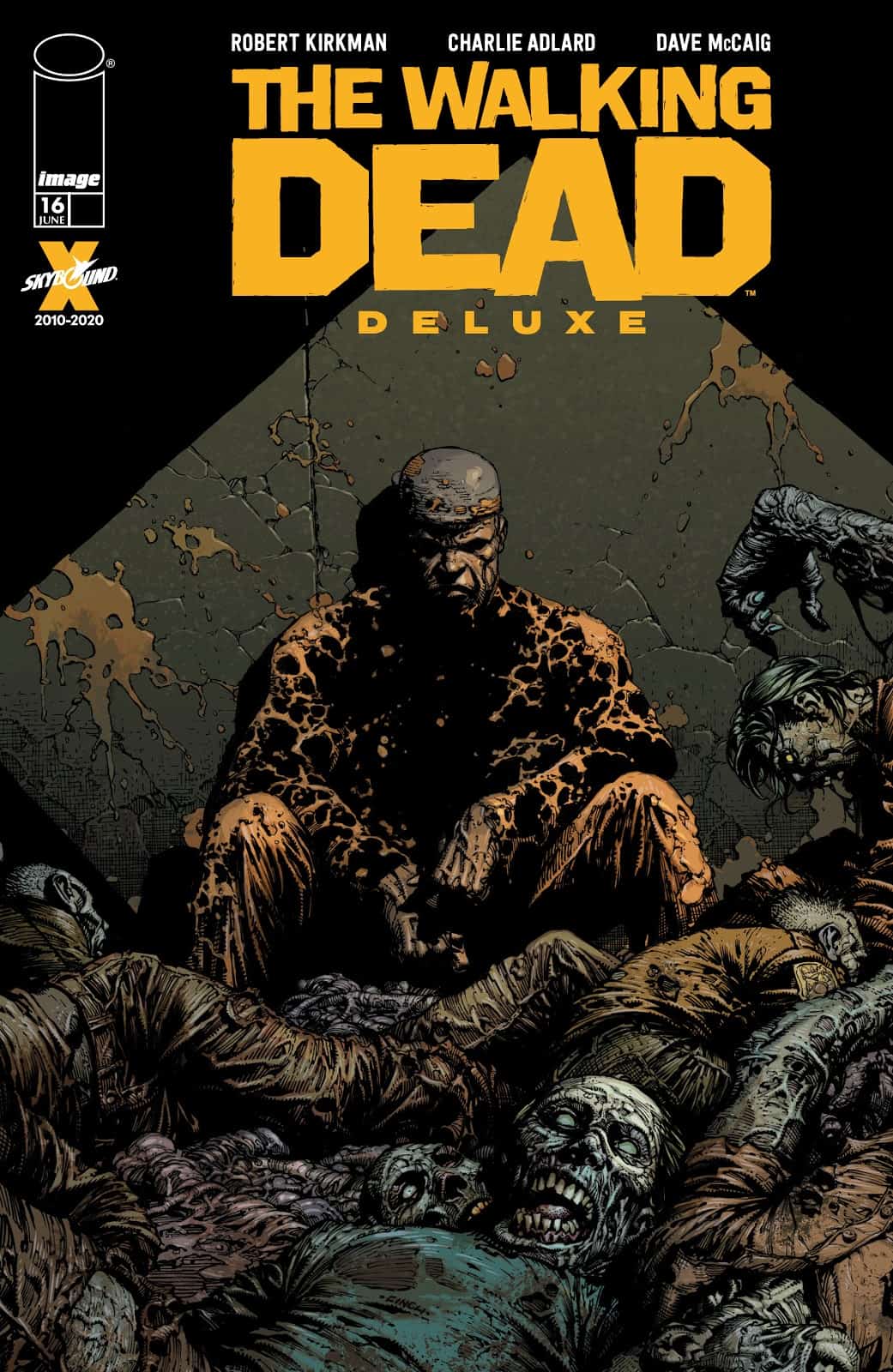 So we have a zombie apocalypse that forces our group into deadly survival where they hole up in a prison…only to be terrorized by a serial killer seemingly ripped from a B horror slasher film. Thomas is one of the survivors in the prison, the one who was put in for tax fraud, and it’s this sentiment that allows such a terrible killer to be unleashed. He is a white male, unassuming and harmless, and the end of the world does have a way of exposing even the harshest truths of the characters we hold so dear.

In The Walking Dead Deluxe #16 we see a voice of social commentary come to light, using the horror genre as a vehicle to explore something more than just a spat over minor differences. A killer is on the loose. But what does our group immediately do? They throw the black man in a cell and wait upon the cop’s judgement to steer them in the right direction.

It’s TWD however and nothing ever quite goes to plan because Dexter, the man in the cell is honestly innocent and Andrea is forced to face the consequences of that decision directly. While the ramifications of these actions are further explored in the next issue, for now we are forced to see the group we love in a light that isn’t so flattering. The situation quickly turns dire and Rick puts himself in a position of power that is ominous to say the least.

This issue really does play to the strengths of the horror genre in more ways than you might imagine. The clichés of nude women with a perverted man peeping just behind and someone believed to be dead but no body to be found set against the backdrop of a killer roaming around with a group of scared survivors gives the undeniable impression of a 1980’s horror flick. This is horror, everyone. That much is difficult to deny.

But the best of what horror has to offer isn’t just scantily clad women and the jump scares of a killer chasing after you, it’s in the story’s ability to reflect the horrors of our world with a meaningful voice. In that, The Walking Dead Deluxe #16 excels. It might not be what you want to see, but it is the reality. We can show our worst selves when scared or put into a position of deadly survival but that simply does not excuse perpetuating the worst behaviors that society shaped before its collapse. This issue points towards a breaking point that the group must confront but even its own exposure is a lot to take in.

For all of it’s engaging use of genre, intricate character work and memorable moments, once more we see Dave McCaig coming into the fold with colors that liven the story to help punctuate just the right points. Going back to our first installment in our IN LIVING COLOR commentary discussing the impact that color had on the horror genre in film, this rings even more true when dealing with a story so similar to slasher flicks we love. The gore is stomach turning now that it is no longer hidden in shades of grey and the reactions are even more vivid to the horrors that are unfolding. It’s masterful work that continues to elevate the entire story.

The first part of the serial killer plotline is a rapid descent into madness both for the killer and our group, exposing fears and flaws that maybe we didn’t want to believe still lingered. The Walking Dead Deluxe #16 leans into the horror genre to find a voice for social commentary that is both unexpected and difficult, yet necessary all the same. Sure it isn’t perfect and maybe it could be argued that a more youthful Kirkman fell into generic expressions that catered more towards stereotypes than meaningful conversation, but for this book and what it hopes to accomplish I think this is one of the more resonant issues to carry themes that only a story like TWD can do. 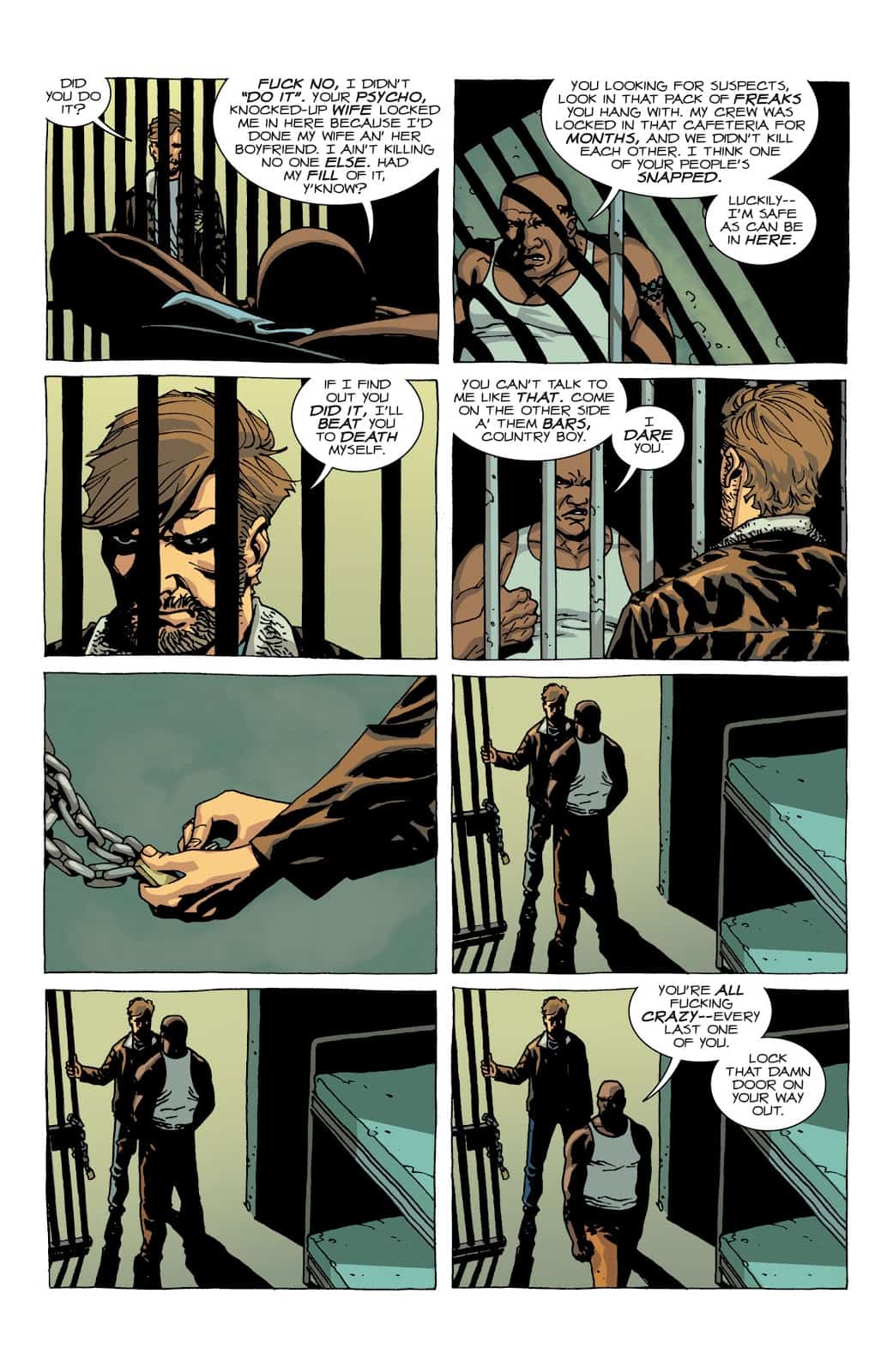