Following the introduction of a TWD slasher story, we pick up with what is essentially part II with The Walking Dead Deluxe #17, pulling readers into a deep philosophical discussion on the consequences of killing in the apocalypse. 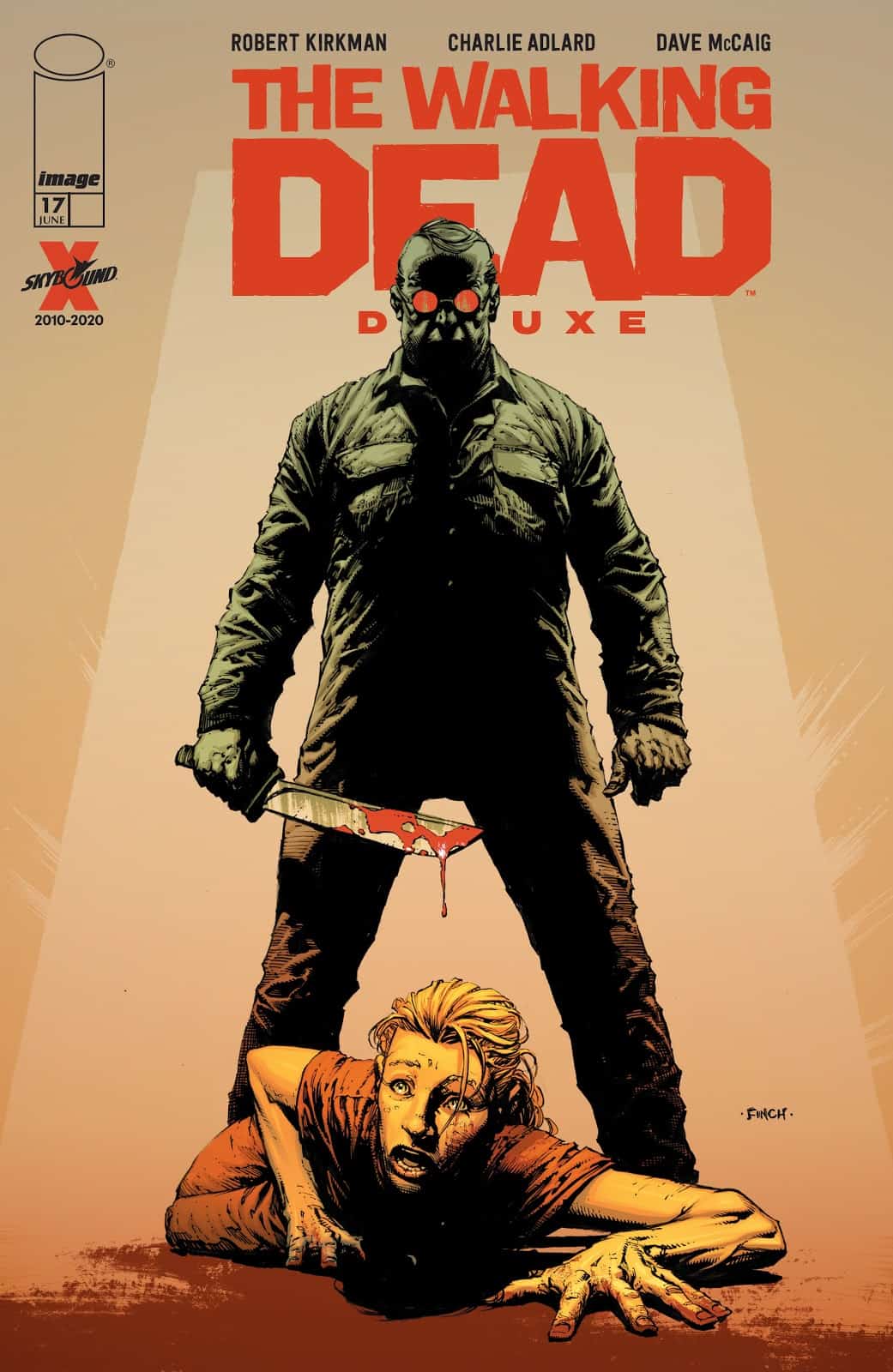 This issue is a perfect representation of what I hoped to discuss when starting this IN LIVING COLOR ongoing column looking back at the rerelease of TWD. It’s an excellent comic, executed remarkably well in everything from plotting all the way to lettering and everything in between. But this isn’t a review, this is a closer look at the themes and interplay in character dynamics that made the series so successful, now punctuated in full color – a precedent we’ve covered heavily so far. The Walking Dead Deluxe #17 brings everything together from the legacy of color in the horror genre to posing a question only TWD can.

An 80’s slasher flick-inspired serial killer is loose in the community, should he face the death penalty?

We’ve covered heavy themes such as racism, misogyny, and the sheer overwhelming amounts of violence in this vision of the apocalypse so far just seventeen issues in, but the question of the death penalty is something entirely different. Fans of the AMC series this dilemma will be familiar from the second season when Rick and Shane are on opposite sides regarding what to do with a survivor they found who is now inside Herschel’s farm. The question on what to do in that TV series blurred much more than what we find in the comics, because here it isn’t just some survivor. It’s Thomas the serial killer, attempting to murder Andrea in broad daylight.

While the question of what to do with Thomas is the clear focal point of the issue, I have to say McCaig pulls out all the stops here as we see Rick violently stop Thomas in his tracks. the violence shared between both Thomas and Rick set against a daylight backdrop is a stark reflection of just how bad the situation has gotten. It’s this type of punctuation that makes McCaig’s work in this series so invaluable. Significant moments like this just hit harder, and as Rick finds himself in tunnel vision, seeing only red as he rains blows down on Thomas, we as readers see the story in a whole new light.

Luckily Tyreese is there to pull Rick off of Thomas, leaving us with the resounding question…what do we do with him? The death penalty is a heated topic and I’m not hear to settle the debate once and for all, but it is a remarkable notion to consider for this group of survivors. They’ve all had to kill to get where they are, the world is more violent than ever and it demands even more as time goes on, but how much of civilization have we lost? The group is led by a police officer and carries a social structure within a community they are trying to build together. Do rules of law apply? If so, which ones? And if not…well we’ll save that discussion for another issue.

For now, it’s a question of do we hang Thomas for what he’s done. We are led into that debate in a violent manner, but Rick put’s it succinctly when he says “You kill. You Die.” It’s a line that he isn’t willing to let go of and it sets the tone for how he hopes to lead this community. Is he right? There are other ideas floating around and they find such a significant precedent for those who know where this path leads Rick specifically. It’s a line that he isn’t always so willing to uphold, but this is a Rick who hasn’t seen nearly as much. The old ways are still fresh in his mind and he is doing his best to keep them alive. The Walking Dead Deluxe #17 goes out of its way to side with Rick in that decision but be wary of how clear they present the decision.

Remember this when Negan comes. “You kill. You Die.” is a line that we will be coming back to.

For now, the death penalty feels like a logical conclusion for this group who has suffered untold violence against them and forced to lash out to save their own lives. But it’s faulty logic. This issue might not show why exactly but it is setting up the foundation for that very exploration to come later in the series. This is a monumental moment for Rick and even Kirkman knows just how significant this was early on. In the “Cutting Room Floor” section Kirkman gives a story about how he was able to get all of the original art for this specific issue and while most would question what made this one so special, I think both its execution and potential answer that question. There is no denying that this represents a turning point.

Using the horror genre tropes like a slasher cliché to expose the cracks in the community that are holdovers from a life long gone is a perfect path for TWD and shines a light on what this story is able to achieve so well. Their answer to the death penalty isn’t what makes the series so timeless, but the proposition of humanity within the context of an apocalypse changes everything. It’s such fertile ground for powerful storytelling and the creative team takes full advantage at every chance they get. The Walking Dead Deluxe #17 is exactly the type of comic that can result of this dynamic in action. 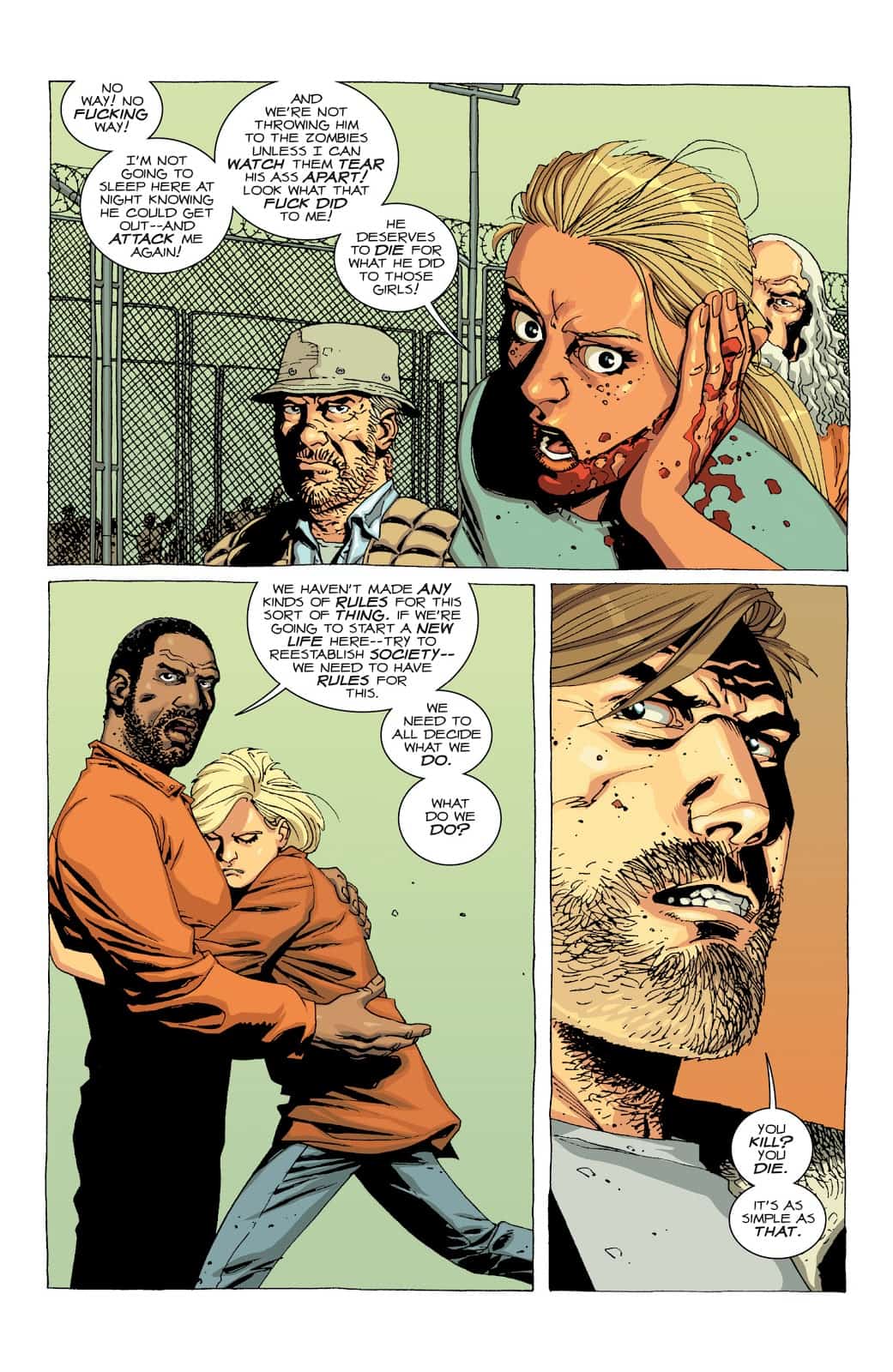