Now this one is a doozie. 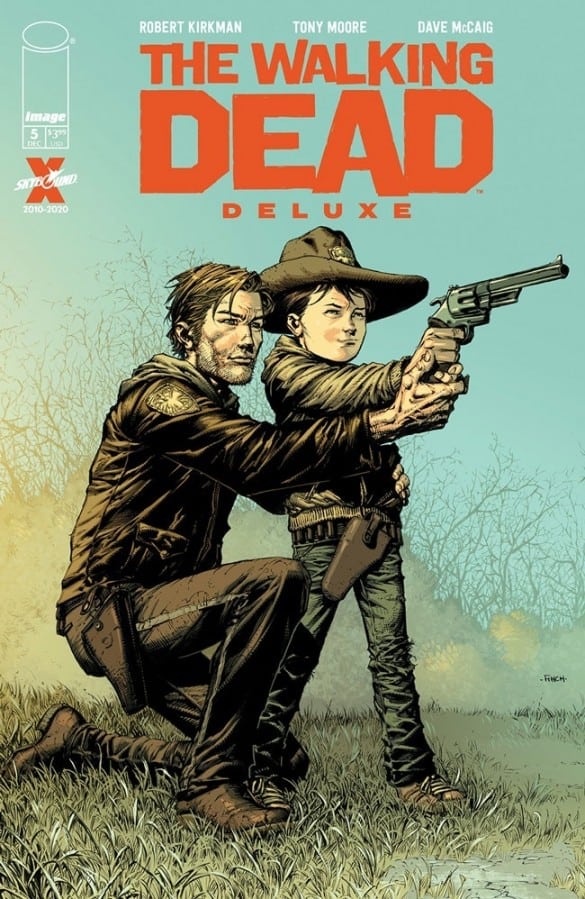 The Walking Dead Deluxe #5 takes us back to a traumatizing moment in TWD and relentlessly cranks up the violence with Dave McCaig’s colors that bring out the best of the visuals while daring us to look away all the same.

Now five issues into our little deep dive into The Walking Dead called IN LIVING COLOR, it’s safe to say we’ve reached what I would describe as a real “Oh SH*T” moment. Something that the series will be widely known for through the duration of its run. It first offers us a chance to get lost into the insightful character drama and sets the stage for interesting emotional beats by exploring social issues like gun ownership and infidelity. In these more introspective moments the series finds an unexpected narrative strength, one that we will be revisiting more in future issues. But then it pulls the rug out from beneath us with a terrifying and brutal surprise and makes us say “Oh SH*T”. It’s been fun so far to see the world of TWD through a colorful lens and get a close look at the Walkers and all the horrors of the apocalypse. But here is where I feel the series starts to get real.

By now, what happens to Amy certainly isn’t a spoiler. On an ill fated trip to the bathroom one night at the camp she is tragically bitten and killed. We spend nearly half of the comic getting more familiar with the group and discovering what they did with their life before the end of the world struck. It’s a moment of clarity and perspective that is sharply contrasted by the terrible reality of what’s befallen each of them. This is exactly what makes the series so painfully engaging, it’s easy to relate to the characters and put yourselves in the shoes of a survivor, and when the tragedy hits it makes you feel even more.

This sheer impact of feeling in all of its emotional intensity, just like what Andrea feels when Amy has a Walker latched onto her neck, is what makes TWD stand out. And in this Deluxe issue #5, we see that powerful impact elevated by colors that bring out the heart of the individuals and the horrors that surround them. There is a sense of precision at work that you can see plainly translated when comparing the original release to the Deluxe version. From the campfire gathering to the fight against the Walkers, McCaig’s colors inject a new level of impact that is quite difficult to put into words. It’s yet another remarkably executed element of a comic that is already all too capable of pulling you into the tragedy and tugging at your heart.

The use of colors in horror is a complicated matter, in other mediums it’s easier to hide in the shadows and rely on jumps scares to get a reaction out of audiences. In comics you need a little more tact but that doesn’t mean you can’t still surprise readers. A fully colorized TWD is, in my own opinion, more effective at these scary moments because it is more immersive. This is true of the deeply relatable moments like sitting around a campfire getting to know each other and the harrowing moments like getting bitten by a Walker. McCaig understands this nuance quite well and uses subtle effects like the glow of the fire to bring life (or the lack thereof) into these pages. This issue isn’t just a great example of what makes TWD so memorable, it’s also an example of what colors can bring to storytelling in comics and its perfectly suited to horror, a genre that benefits greatly from immersive visuals.

This issue really is all about precision and looking back, it defines a sort of pattern or formula that will continue to work well for the series in later issues. Drawing readers in to make them care about what is happening then dropping a narrative bomb seemingly at random to catapult the story into the unknown. The precision is easily seen early on in Kirkman’s script writing for issue #5 as well, which he interestingly points out held the potential of a Jim-focused series of books. This interesting tidbit might draw your attention away from just how direct Kirkman’s writing is and how well even his earliest ideas of what the story should be are conveyed so expertly on the final page.

When we started this journey not too long ago with Rick waking up in the hospital from his coma I mentioned how the series ultimately makes you hug your loved ones just a little bit tighter. That is a concept that will be revisited often as IN LIVING COLOR continues but it rings a little too true in The Walking Dead Deluxe #5. Not only do we lose Amy to a vicious bite we also discover Jim’s “just a scratch” chunk missing from his arm, torn off by a Walker. It’s a nod to the downhill direction of the world and the inevitable consequence of tragedy that just won’t stop. Survival is a constant in TWD and it comes from every direction, which is why it becomes all the more important to hold on to your loved ones. Jim’s anger when fighting off the Walkers even after being bitten is a reflection of the trauma of loss, one that Dale has experienced and Andrea is about to suffer herself, and how the trauma can strike as well as reoccur almost at random.

Such devastating storytelling can only be pulled off with skillful execution and The Walking Dead Deluxe #5 is full of just that. Even compared to the original release we can see how even something as amazing as TWD can be improved ever so slightly by a tonal shift or maybe a balloon tail placement. Sure this issue will hit you right in the heart, but it is also going to impress you simply from its technical proficiency, from script work to illustration to inking to colors, and even letters. So as the struggle for survival continues for the group, let’s just take a moment to appreciate the small things, like a “just a scratch” Walker bite out of Jim’s arm.