“There is No Section Zero”: An Interview with Tom Grummett

Join Cody as he sits down at Honolulu Comic Con 2019 with Tom Grummett (Adventures of Superman, Superboy, Robin, The New Teen Titans, Section Zero) to talk about the impact of the “Death of Superman” and the fascinating history behind his and Karl Kesel’s Section Zero series. 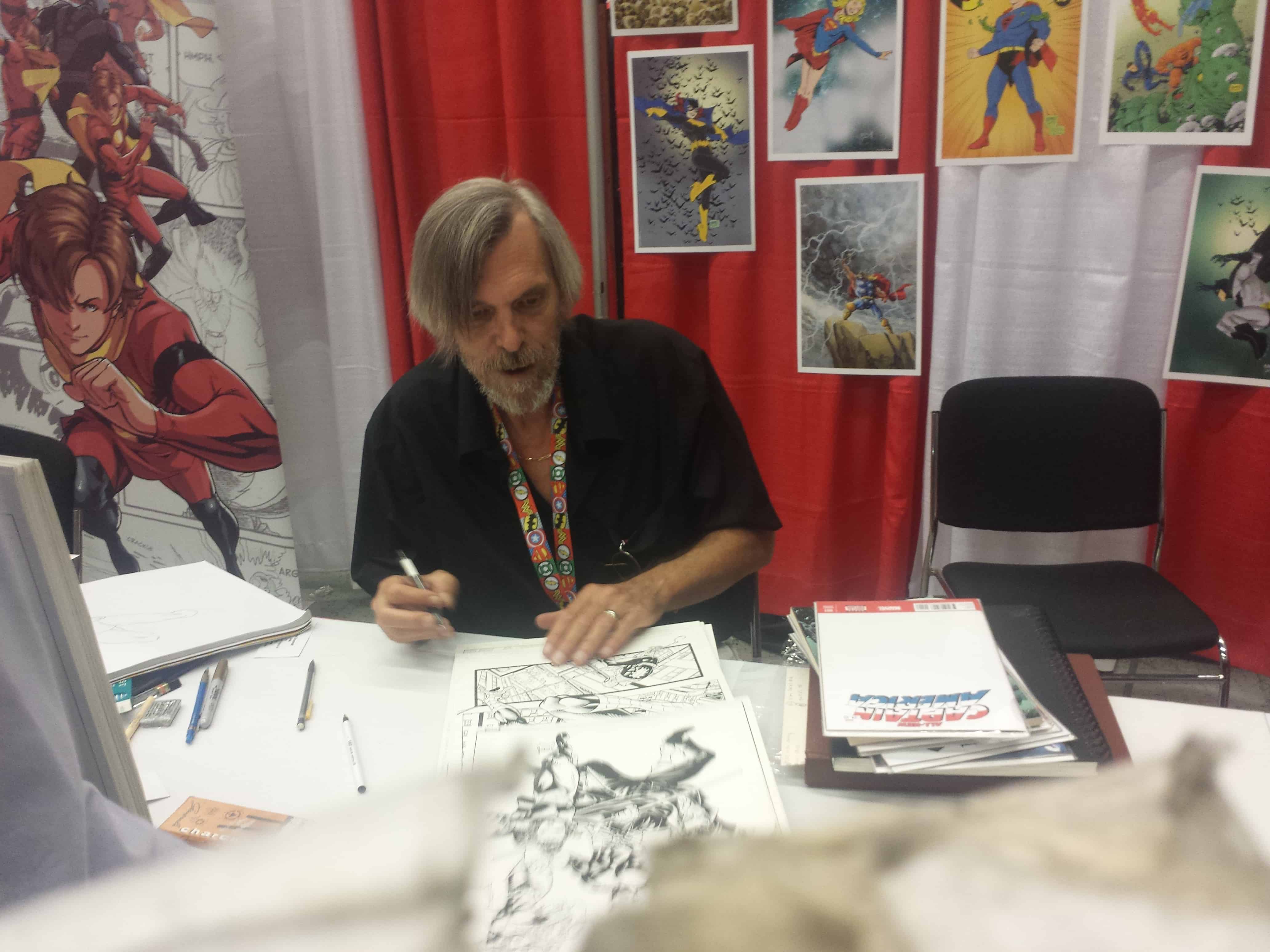 Comic Watch’s Cody White: Tom, how is Honolulu treating you so far?

Tom Grummett: Honolulu is treating us fabulously. Everyone is very laid back, very welcoming, and we’ve been treated very well.  We’re having a great time.

CW: Wonderful to hear and we’re really happy to have you here. I do want to talk about Section Zero a bit but I would be remiss to not get one “Death of Superman” question in when I’m sitting down with one of the architects. 1992-94 was a very interesting time for comics, what with the rise of Image Comics, the death of Superman, the breaking of Batman, Hal Jordan losing his mind and killing the Corps… what was it about this era that made a story like “Death of Superman” possible? 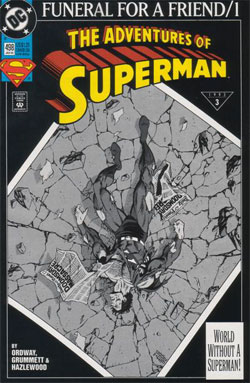 TG: I guess, quite frankly, I don’t know. All we were doing was a comic book story and not a particularly original one. It’s not that Superman hadn’t died before. The only difference with this one is that the world thought it was for real. They thought we were taking Superman away and that, I guess, resonated with the world. That made it turn into something much bigger than anybody could have anticipated. It blew up from that. It went viral before viral even existed. So were kinda riding the hurricane after that.

CW: I know it was the first time in my life that remember comics being discussed in National media, people talking about comics in the way they were talking about this story.

TG: Yeah, an actor I met at a show in Niagara said the same thing. That it was the first time that National media covered a comic book story and I guess he was right.

CW: So looking towards the more recent past, in the early 2000s, you and Karl [Kesel] launched Section Zero, three issues published from the Gorilla Comics imprint of Image Comics, and then things went awry and Gorilla Comics folded, right?

TG: Gorilla Comics wasn’t actually a company. It was like a collection of t-shirts. We all had our Gorilla Comics t-shirts. We were a band of brothers kind of type thing. So it was a loose connection of people coming together under a common banner. Originally there had been a financial backer in the wings to support this enterprise and it evaporated, so then we were all kind of on our own, creating our own books and paying for all the production work and stuff out of our own pockets. As my friend, Ty Templeton, says, “self-publishing comics is like setting money on fire.” You can only do it for so long and we weren’t going to see any profit obviously on Section Zero for quite some time. Karl’s marriage broke up and he had to get back to work and frankly, so did I. So we had to reluctantly put Section Zero on the shelf and go on to other paying work but we never forgot about it. We were just going to pick it up when we could. And we took a couple of tries at it, once in 2012 trying to turn it into a web comic. But even at that, it’s hard to not have to do the other things, even if you’re just doing a couple of pages a week. It’s very difficult to do. So Karl came back with the idea of crowdfunding to finish off the storyline so we launched a Kickstarter and got funded, which gave us the financial backing to finish the three subsequent issues and then collect them up with the original three issues into a handsome hardcover volume. Then Jim Valentino, who was originally our champion in the Gorilla days—he loved Section Zero—offered to publish the completed version as floppies, individual issues, once our hardcover came out, and that’s what is happening right now. The fifth issue of Section Zero is coming out this week [8/7/19], I believe. 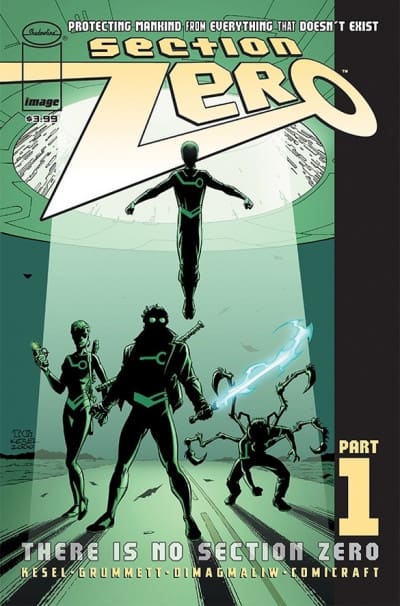 CW: This is one of the only creator-owned ventures you’re really associated with. What is it about this particular project that drew you back in after 15 plus years to make sure it got told?

TG: Well, first of all, it was a collaborative effort with Karl Kesel and Karl is an amazing person to collaborate with. The engine behind Section Zero is really Karl. The tagline [for Section Zero] is “There is No Section Zero”; if Karl’s not available to do it, there is no Section Zero. He’s the idea man. He came up with most of the characters. I contributed a few of my own which made it in. Section Zero, we custom built it to be the dream project. It’s everything that Karl and I got into comics to do. It combines all the things we love about comics under one roof. That’s the attraction for me. Working on Section Zero is actually like being on vacation in a lot of ways. It doesn’t feel like work and it’s lovely to have the opportunity to work on it again.

CW: Are there any other creator-owned projects you have percolating right now? I know in the Q&A we just came from you had mentioned wanting to work on a western, which I think is a fantastic idea.

TG: I’ve been saying a western for years! I have a couple of little ideas in the back of my mind. And who knows? If we can keep Section Zero plugging along on a semi-regular basis, these other ideas might come to fruition at some point or other. I would have to team up with a writer, though. I’ve tried writing before and writing is hard. Drawing is easy compared to writing, I’ve though.

CW: Are there any active writers that you would like to work with that you haven’t had the opportunity to work with?

TG: Oh there’s a bunch of them. Probably too many to name. Maybe I won’t name anybody for fear of embarrassing somebody? There’s a lot of great writers out there and some guys I’ve worked with that I’d love to work with again. But you never know how these things are going to pan out. A lot of times, you’ve got to wait for the stars to come into alignment. That’s kind of the situation we were in with Section Zero and fortunately the stars aligned. 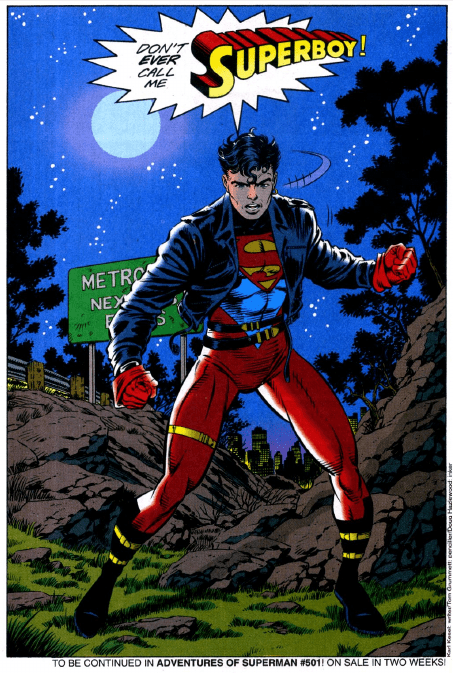 CW: So there’s a chance that, after this six issue floppy release, we’ll see more Section Zero in the future?

TG: There absolutely is, because we did another Kickstarter and got funded. So we’re delving into the history of the first iteration of the Section Zero team. It’s called Section Zero: 1959 and that will be out by the end of this year.

CW: Well we will be looking forward to that! Comic Watchers, make sure you get out to your LCS and support creator-owned projects like Section Zero and many others!

“There is No Section Zero”: An Interview with Tom Grummett

Marvel Comics Sneak Preview for February 1, 2023: Can Okoye Be The Hero Wakanda Needs In Its Darkest Hour? Find out in WAKANDA #5
January 31, 2023